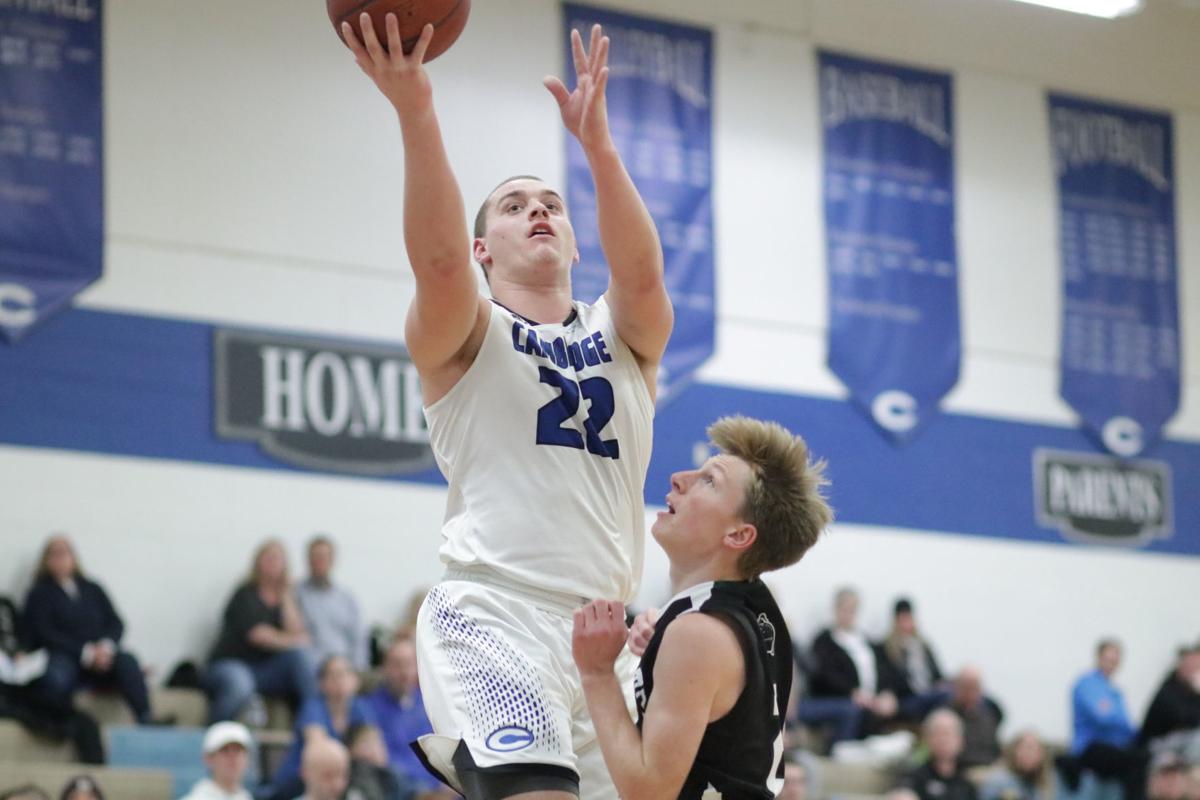 Senior forward Jordan Marty makes a layup for the Cambridge Blue Jays in the second half against Wisconsin Heights on Tuesday night. The Blue Jays earned a 68-59 victory. 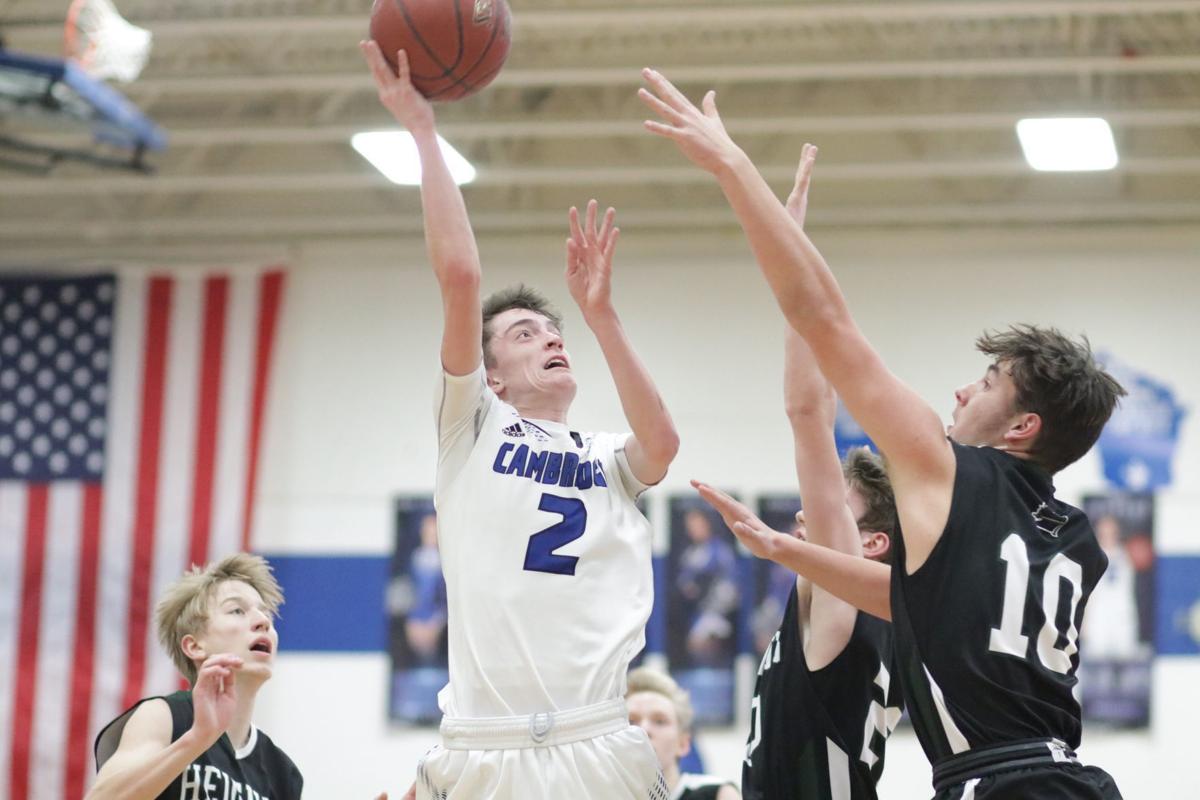 Junior Jack Nikolay finishes in the lane for Cambridge in the first half of its 68-59 victory over Wisconsin Heights on Tuesday. Nikolay finished with 22 points. 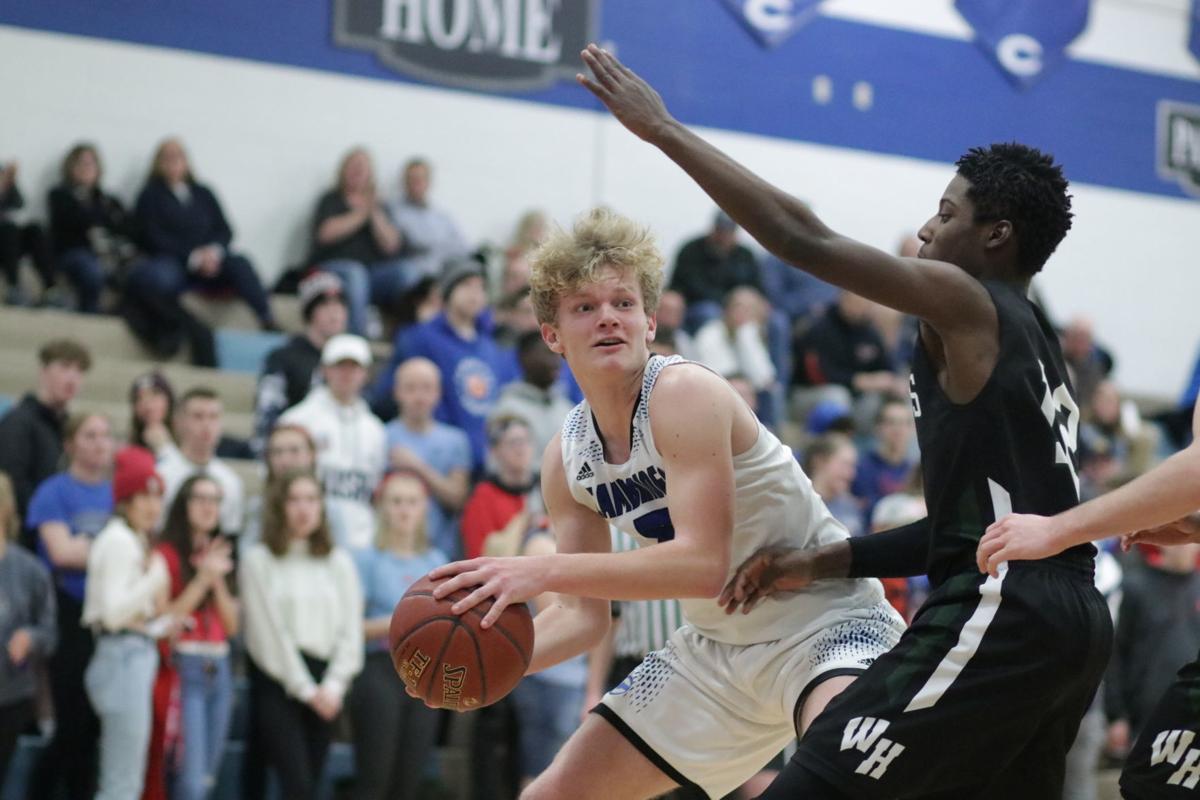 Senior forward Jordan Marty makes a layup for the Cambridge Blue Jays in the second half against Wisconsin Heights on Tuesday night. The Blue Jays earned a 68-59 victory.

Junior Jack Nikolay finishes in the lane for Cambridge in the first half of its 68-59 victory over Wisconsin Heights on Tuesday. Nikolay finished with 22 points.

The Cambridge junior is 5-foot-11, 125 pounds, but that doesn’t stop him from being the second man in on rebounds or curling around a screen and attacking a post player while going to the rim.

Nikolay had both of those aspects and the 3-point shot working for him when he scored 15 of his game-high 22 points in the first half for the Cambridge Blue Jays in their 68-59 victory over the visiting Wisconsin Heights Vanguards in a Capitol South boys basketball game on Tuesday night.

“I think getting to the free-throw line is awesome; I like shooting free throws,” said Nikolay of curling to the basket off of screens. “The most important part of (curling off of screens) is having big bodies like (Andrew Downing) and (Jordan) Marty out there. Those guys do a great job getting to the spot and setting great screens. Then it’s just me using my quickness to get around the screen really tight and make sure I’m loaded and ready to explode when I get around it.”

Senior guard Drew Jeffery and Nikolay combined to score fewer than eight points per game last year and were the top returning scorers from a Cambridge team that put its first winning streak together on the way to a loss in the regional final.

During the first five games of the season — all losses — it looked like Cambridge might be headed in the direction of another long winter. But the Blue Jays have found consistent offense scoring more than 60 points in four of their six most recent games.

The catalyst to the scoring is Nikolay and that was evident when the Blue Jays opened on a 24-2 run to start the game Tuesday night.

“You can see their confidence level going up as the offense goes up,” Jeffery said. “To think we scored 31 points in those first two games this year. For us to be scoring where we are right now, you can tell the confidence is starting to grow offensively.”

And that translates directly to added effort on the defensive end.

I told them defensively, we executed the game plan really well tonight,” Jeffery said. “We wanted to have eyes on (Deshawn) Barsness the whole time and make sure if he caught it we had the lane closed. I think we frustrated him a little bit in the first half when he couldn’t get to the rim.”

Barsness finished with six points after averaging 16.1 points per game entering the night. Everett Buol made three 3-pointers and scored 13 points to lead the Vanguards.

Though they’ve won five of their last six, Jeffery knows they aren’t a finished product. The Blue Jays had a 15-point lead in their win over Waterloo last week and nearly let it slip away before Nikolay iced the win with free throws down the stretch.

Against Wisconsin Heights on Tuesday, Nikolay made a 3-pointer to take a 51-31 lead with 12 minutes, 57 seconds left in the second half. The Vanguards (5-6, 0-2) trimmed the deficit to 13 points twice and Jeffery called timeouts to utilize the learning opportunity.

“This is all still a learning experience,” Jeffery said. “I brought up the Waterloo game because that was something they can relate to. We didn’t finish that game real well. We had one stretch where we were turning the ball over three or four times in a row — that’s the last thing you want to when you have a lead because that’s the only way they can come back.

“It’s just little stuff, but if they can relate to something like the Waterloo game, they learn better from it.”

The first time Wisconsin Heights started building perceived momentum in the second half, Trey Colts made consecutive baskets and Marty converted an old-school three-point play after getting fouled in transition to push the lead back out to 22.

Colts finished with seven points and Marty had eight.

Luckily they built the early lead and were able to hold on for the win.

“I think one of the things from Waterloo was that we had a drought toward the end of the game where we weren’t scoring and weren’t looking to score,” Nikolay said. “Knowing that the game isn’t over is something we need to remember. We need to relax, keep pace and attack when it’s open.”