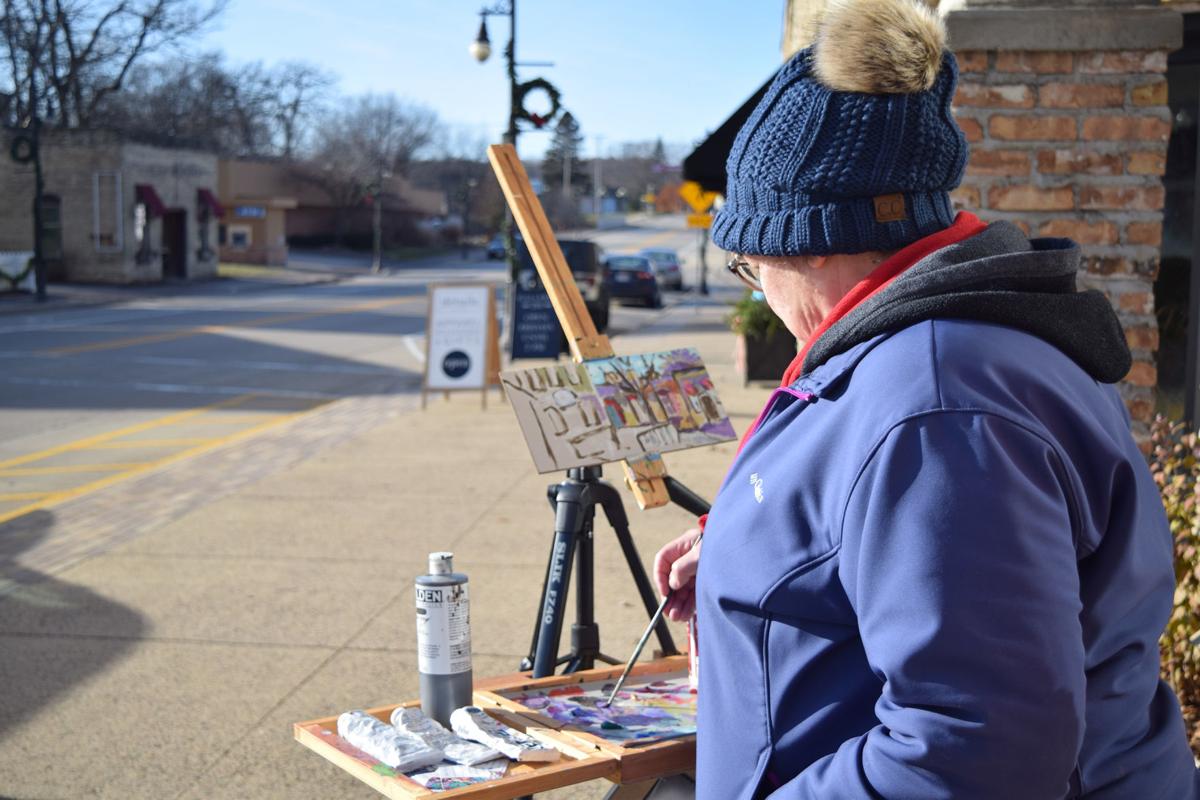 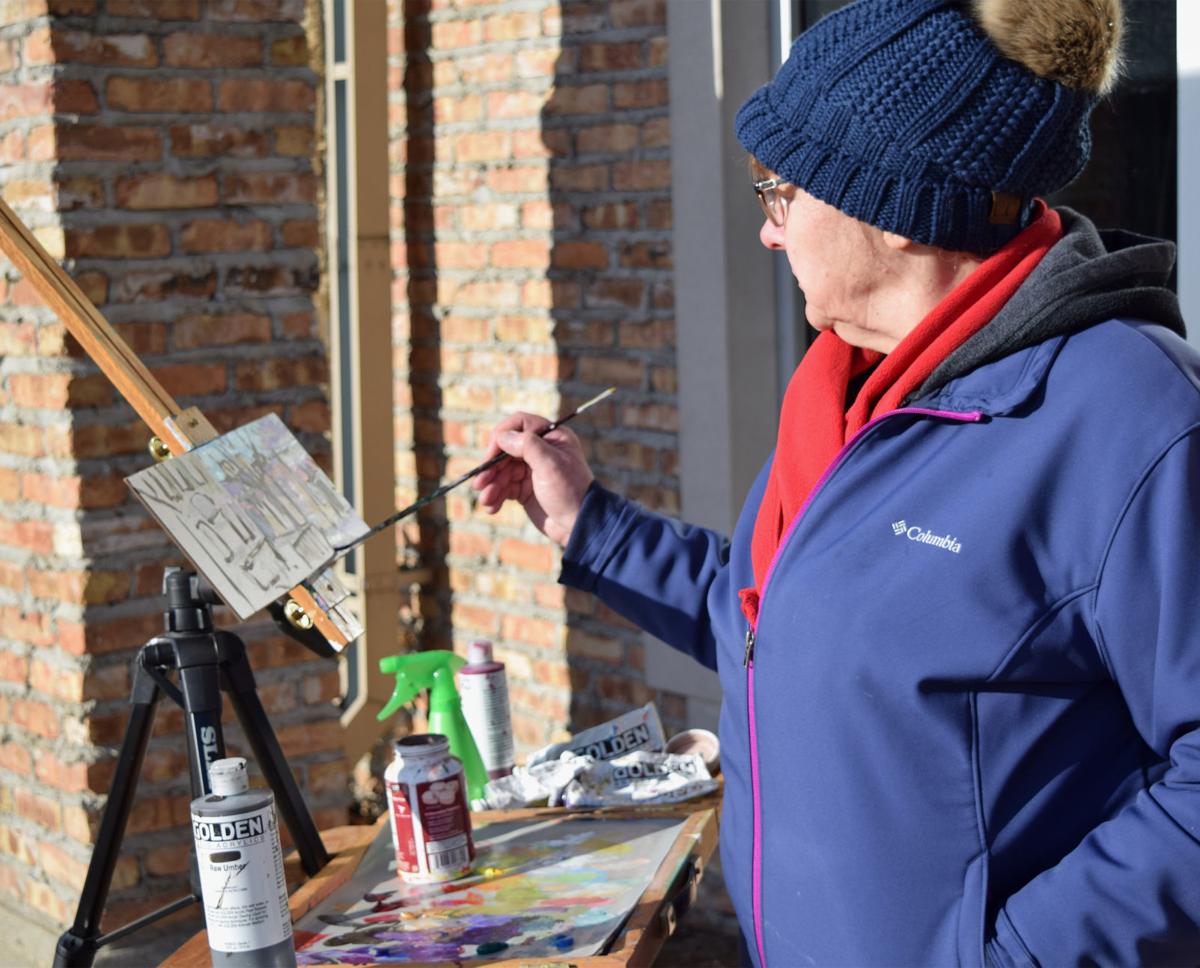 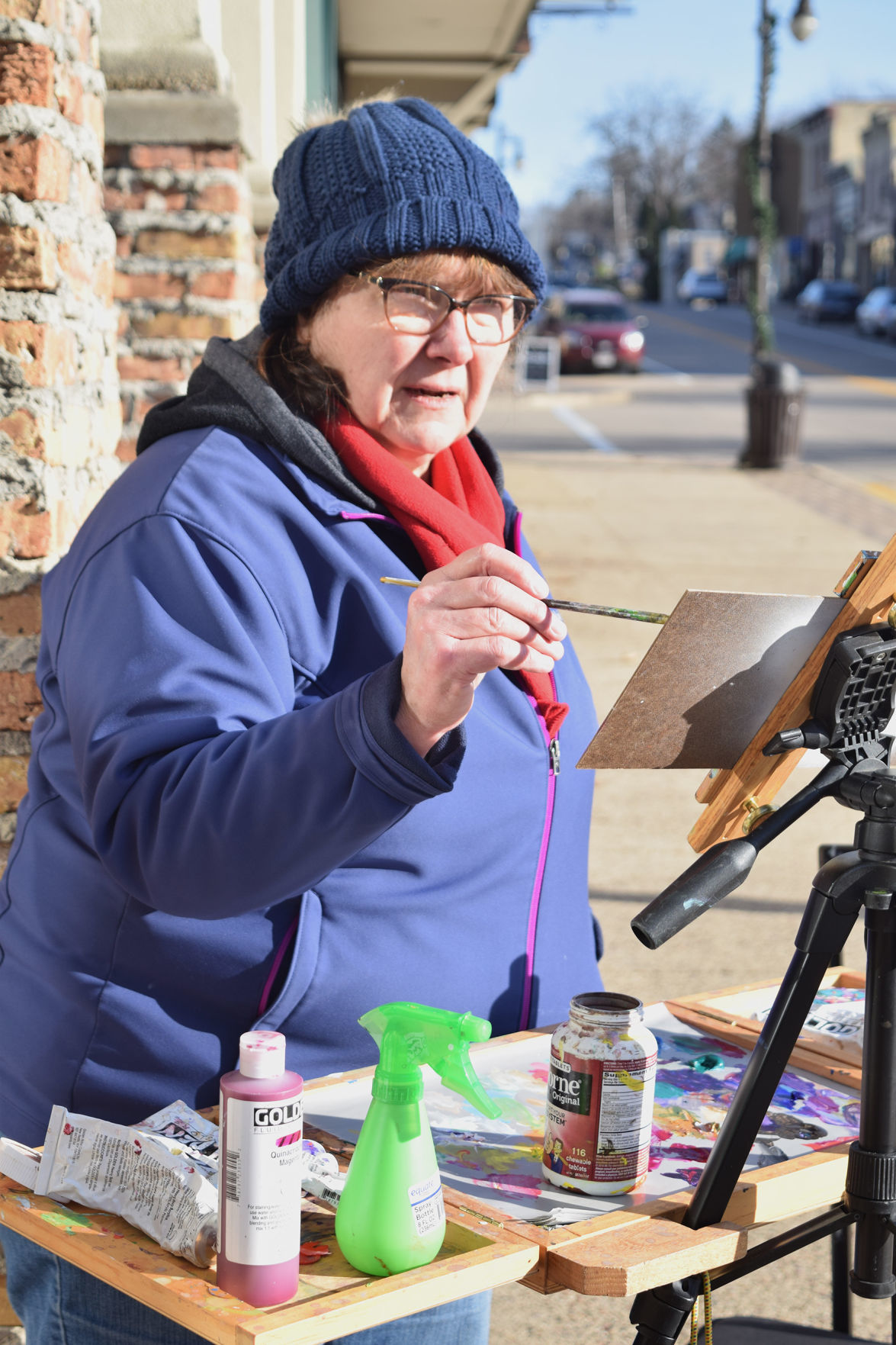 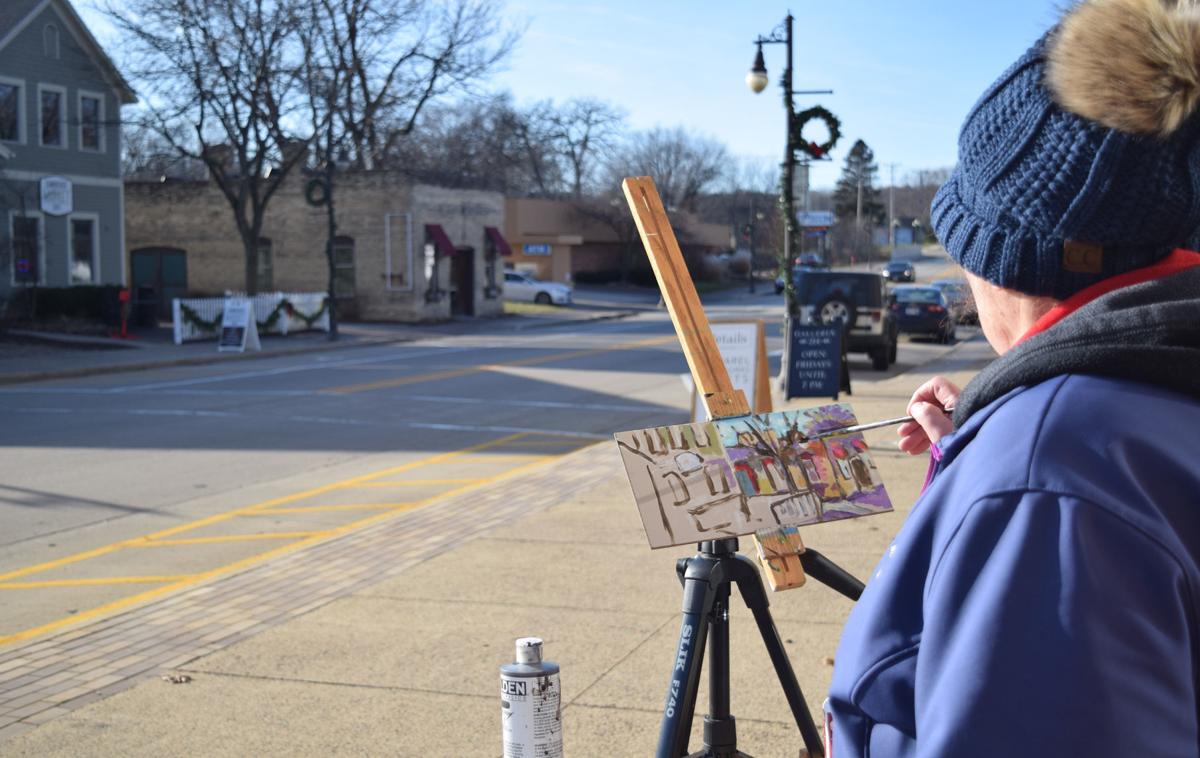 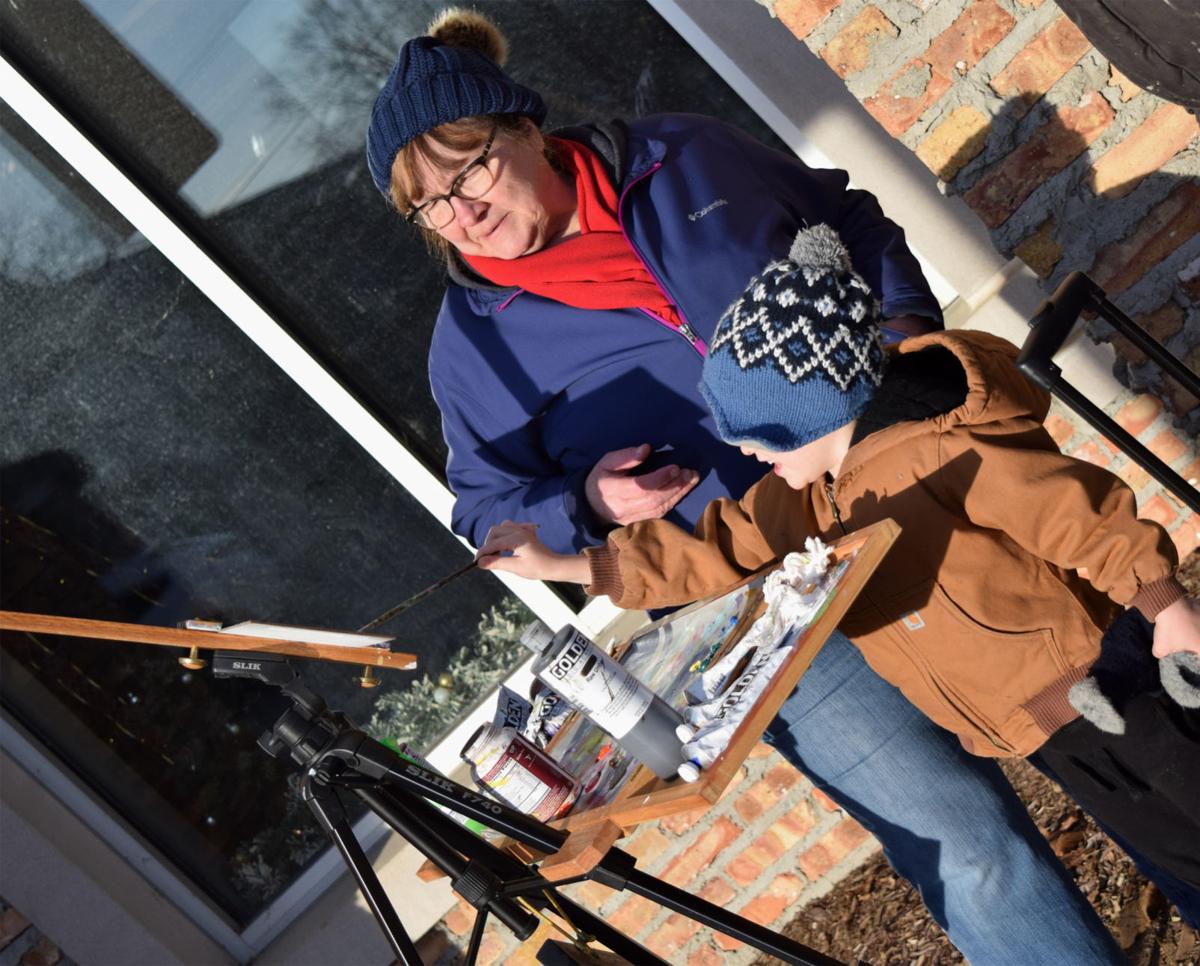 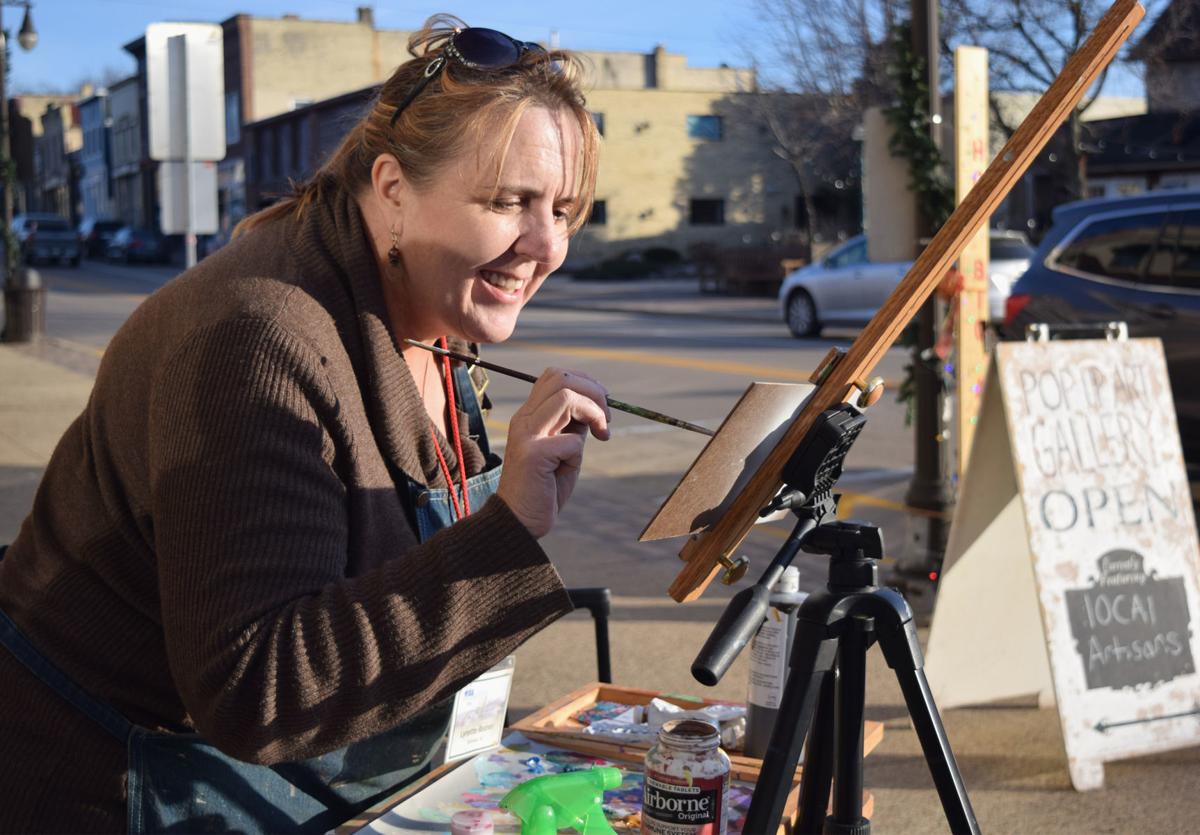 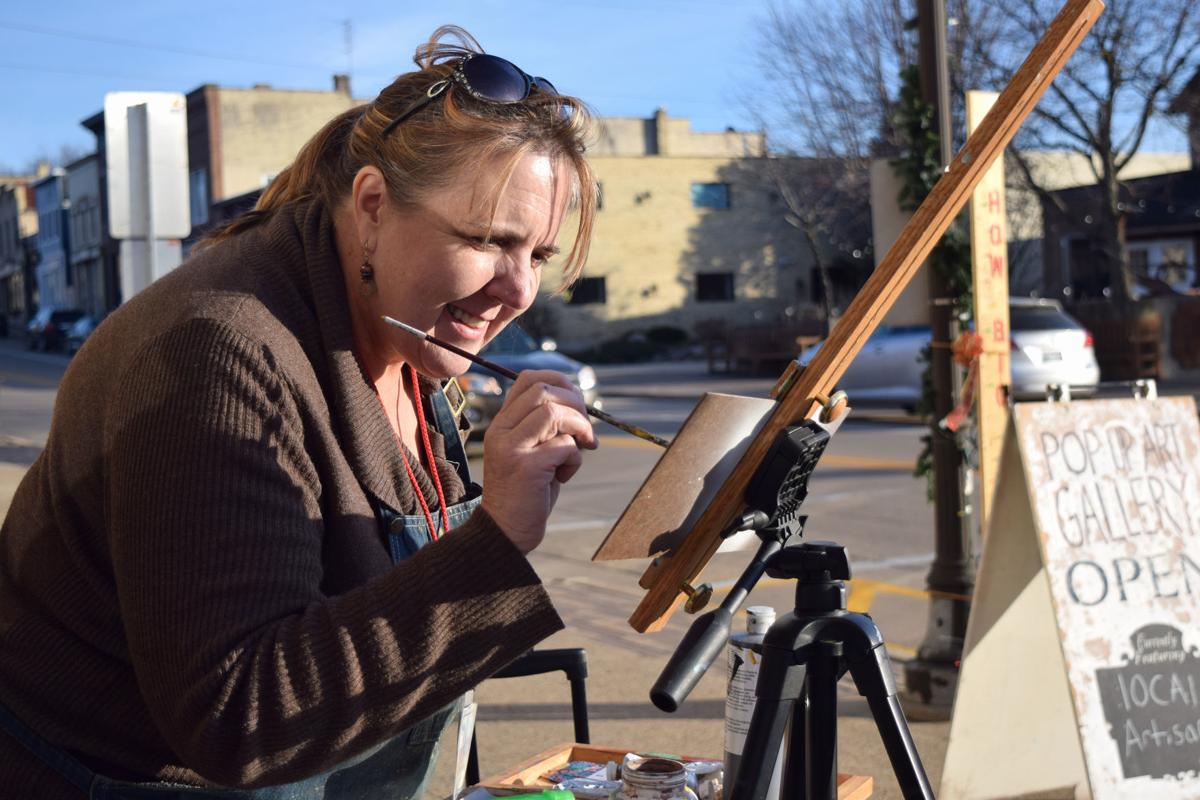 Local artist Janet Nelson set up on Main Street in Cambridge one sunny day in December, her painting taking form over two hours at midday.

She dabbed acrylic paints on a landscape canvas in front of the former Matt Kenseth Museum, colorfully depicting the Cambridge Market Cafe and the building next door to it.

At one point, a five-year-old boy in a brown coat approached to look over her shoulder.

“Would you like to paint?” Nelson asked him. “I’ll let you paint on this.”

A brush filled with green — his favorite color, he said — he added to Nelson’s existing work.

The boy, who could barely reach the canvas, was one of a dozen people Nelson invited to add to her creation on this day. Several people took her up on it, including a group of girls who painted the sky, and Nelson’s friend and artist Lynette Redner.

This is what she loves about painting outdoors, Nelson said. She gets the chance to talk with passersby.

“I like to paint where there are people because they talk to you. Already, I’ve talked to two or three groups of people,” Nelson said. “That’s the value in this to me.”

The art of painting outdoors is not new. Plein air painting is a French term for “painting in the open air,” said Stoughton artist Kristina Brewer. It grew in popularity at the turn of the 20th Century, Brewer said, made famous by Claude Monet and other impressionists

But recently, through a mutual interest in plein air, local artists have found community, and a shared connection with nature.

The practice has a strong regional following, with an annual plein air competition in Jefferson and more plein air groups in the works.

Plein air artists from surrounding communities are increasingly coming to Cambridge, either to paint or to display work.

Brewer is part of the local artist networking group, “Artists, Hippies and Entrepreneurs,” founded in Cambridge in December.

Chris Steinmiller of Concord, who displayed her plein air in Cambridge Main Street storefronts during Classic Christmas, has become involved in “Artists, Hippies and Entrepreneurs.” Nelson, who lives in Cambridge, has also attended the networking gatherings.

Nelson and Redner of Delavan, have also painted together on Main Street.

The goal of plein air, these artists say, is to learn how to really see.

“When I painted my sunflowers in my garden, I saw all of these bugs that I’ve never seen before,” she added.

“Looking at the painting, it’s like a journal. It brings back that moment, the sounds, the smells,” Redner said.

“You are working with true light and shadows and what you can’t get out of a photograph,” said Steinmiller. “When you’re painting from real life and you see the hundreds of different shades of green in a tree, you don’t see that in a photograph…If you don’t catch that, it’s gone because the light just changed.”

Watching Nelson paint on Main Street, it’s clear that she has to move fast. Colors change, shadows move and the scene is not the same from beginning to end.

On the surface, the shadow of the Cambridge Market seems gray. But upon closer look, Nelson decides it’s really purple, and adds a plum shadow to the painting.

Plein air is inherently social, the artists say. It gives them a chance to interact with buyers, generate interest in local art and learn from their fellow painters.

“A lot of people think they have to go out and paint in the woods,” Nelson said. “You are more likely to find people on the streets.”

Redner and Nelson said they met at a Jefferson plein air event, and became fast friends and collaborators.

“I’ve never met a more giving group of artists,” Redner said as she painted a night scape of the Plow restaurant on Main Street, using a squeegee to texture the sky. “Like meeting Janet, we’ve made such a great friendship.”

Because it’s an outdoor art form, this style of painting draws a lot of nature lovers, Redner said.

“I always loved nature, I love being outdoors, and wherever I go, I bring a tablet and draw. If I’m going on a trip, I’m drawing, sketching little things along the way,” Redner said.

Brewer often paints her own garden.

“I love it when the hummingbirds whiz past my head back and forth,” Brewer said. “It’s just heaven.”

Steinmiller and Redner said they often can be found driving around rural roads, looking for landscapes and painting in fields. With her gear in a backpack, Steinmiller said she values “the freedom that you have when you can go wherever you want.”

Plein air painters are also not afraid of a little weather.

Each artist has strategies for painting in the winter: Redner stands on a carpet square to keep her feet warm. Steinmiller wears leather gloves and sunglasses, because “plein air is not good for wrinkles,” she said. Nelson adds rubbing alcohol to her acrylic paint to keep it from freezing.

Redner said she once had a storm sweep her painting into the Rock River.

“It can be really challenging, because sometimes it’s the wind that will try to tip things over, or the Pepsi truck will pull up and park in front of your scene,” Redner said.

Steinmiller is compiling a group of local plein air artists that can coordinate when to go out and paint together. She has visions of creating a plein air event in Cambridge, and hopes for more Jefferson County opportunities for plein air painters to work together.

“I’m looking for people to drag out with me,” Redner agreed. “I want to share this experience.”