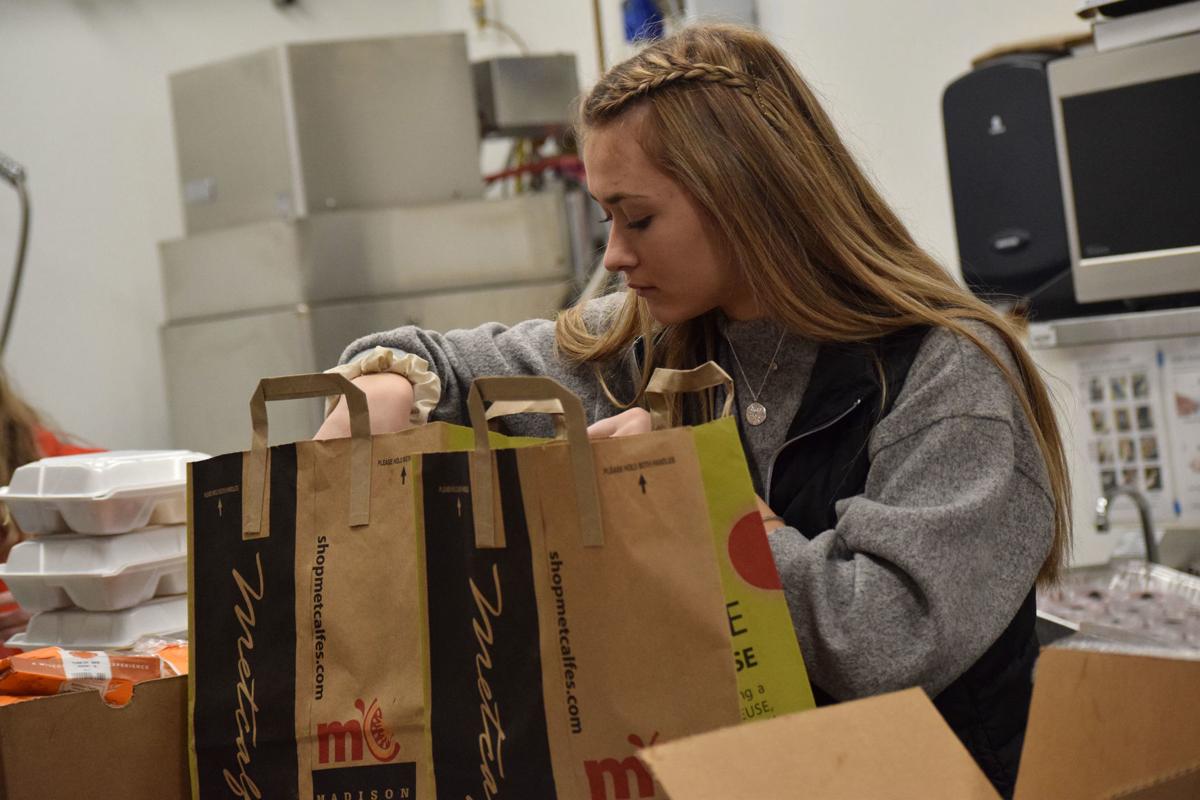 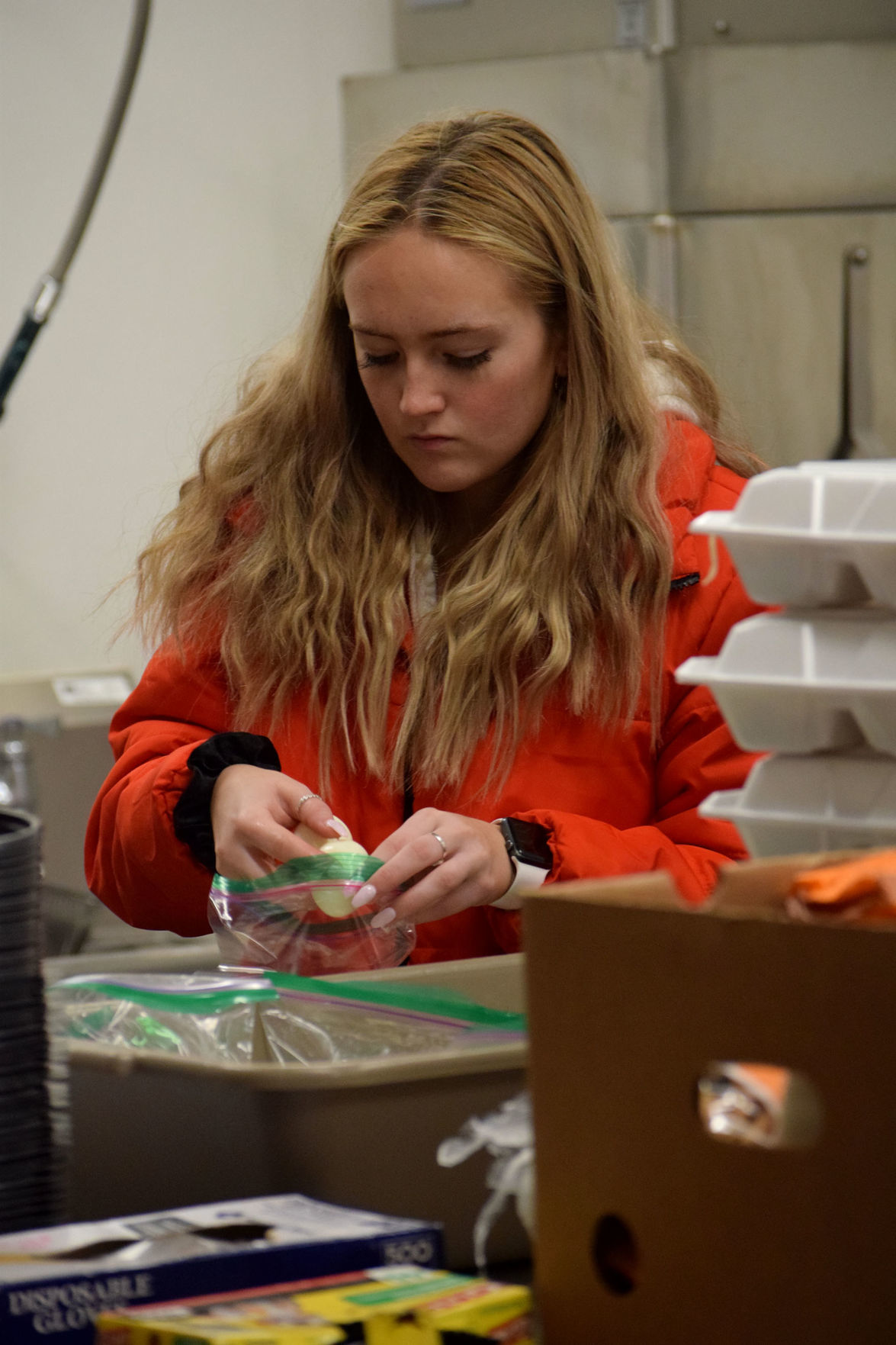 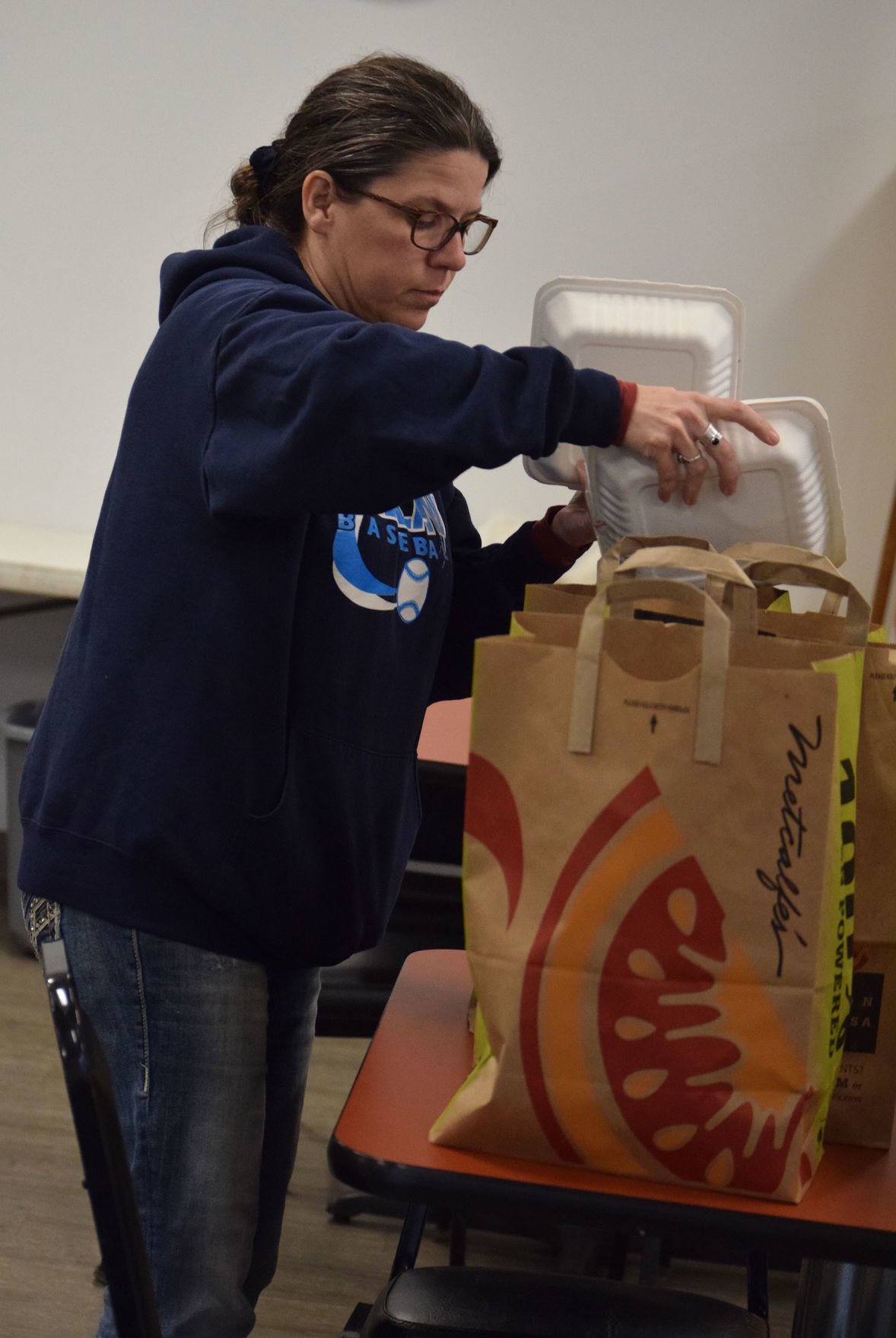 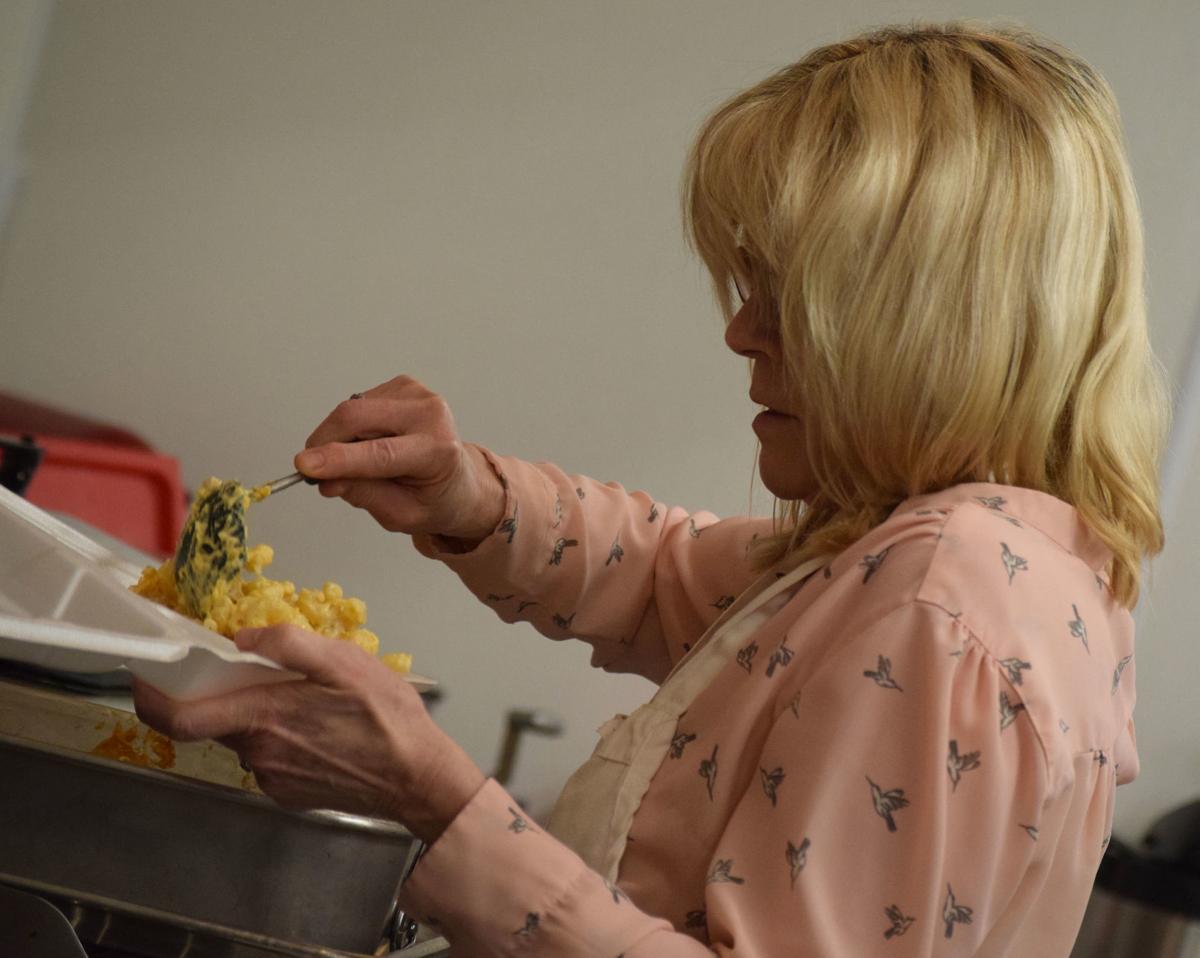 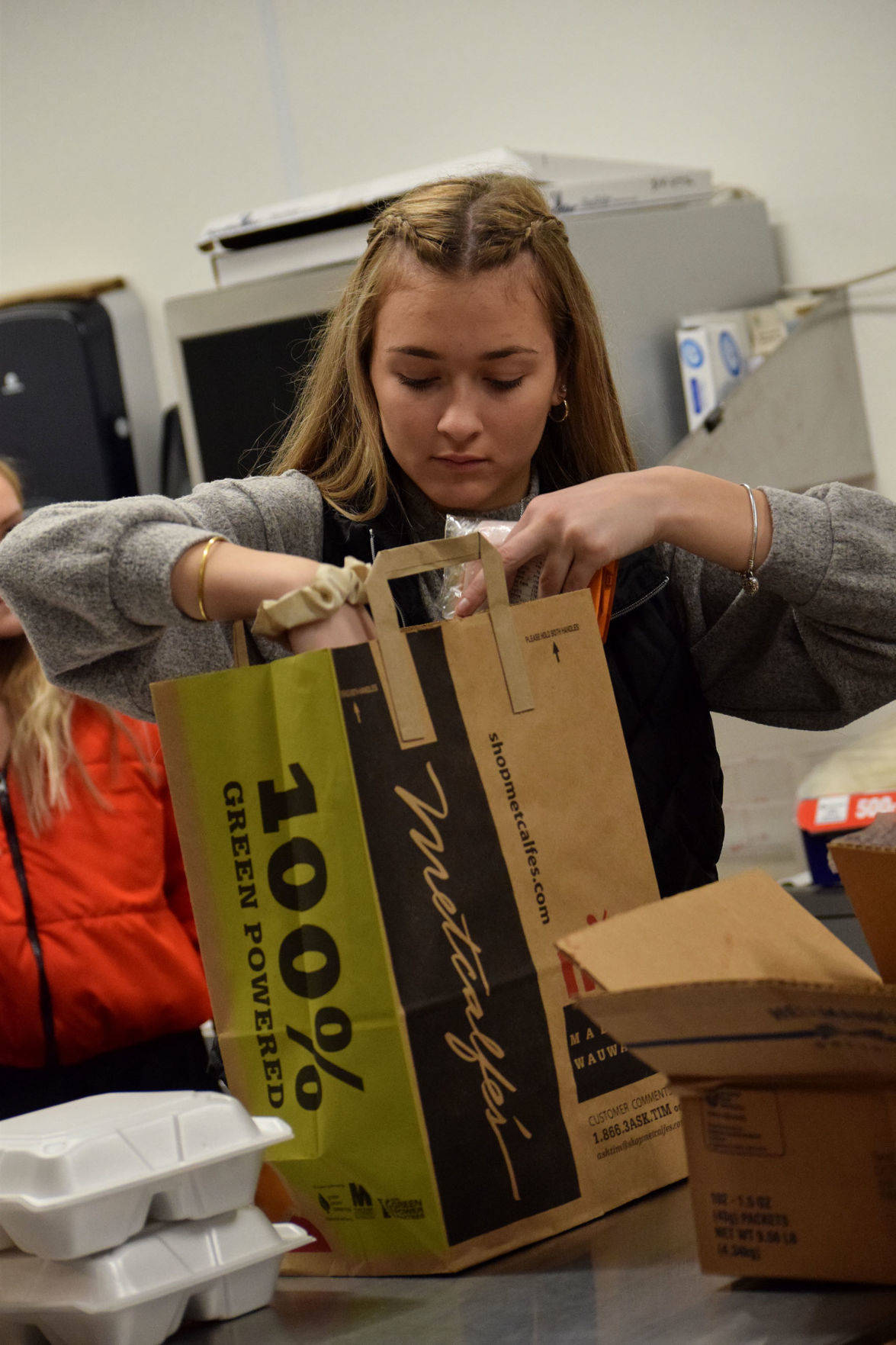 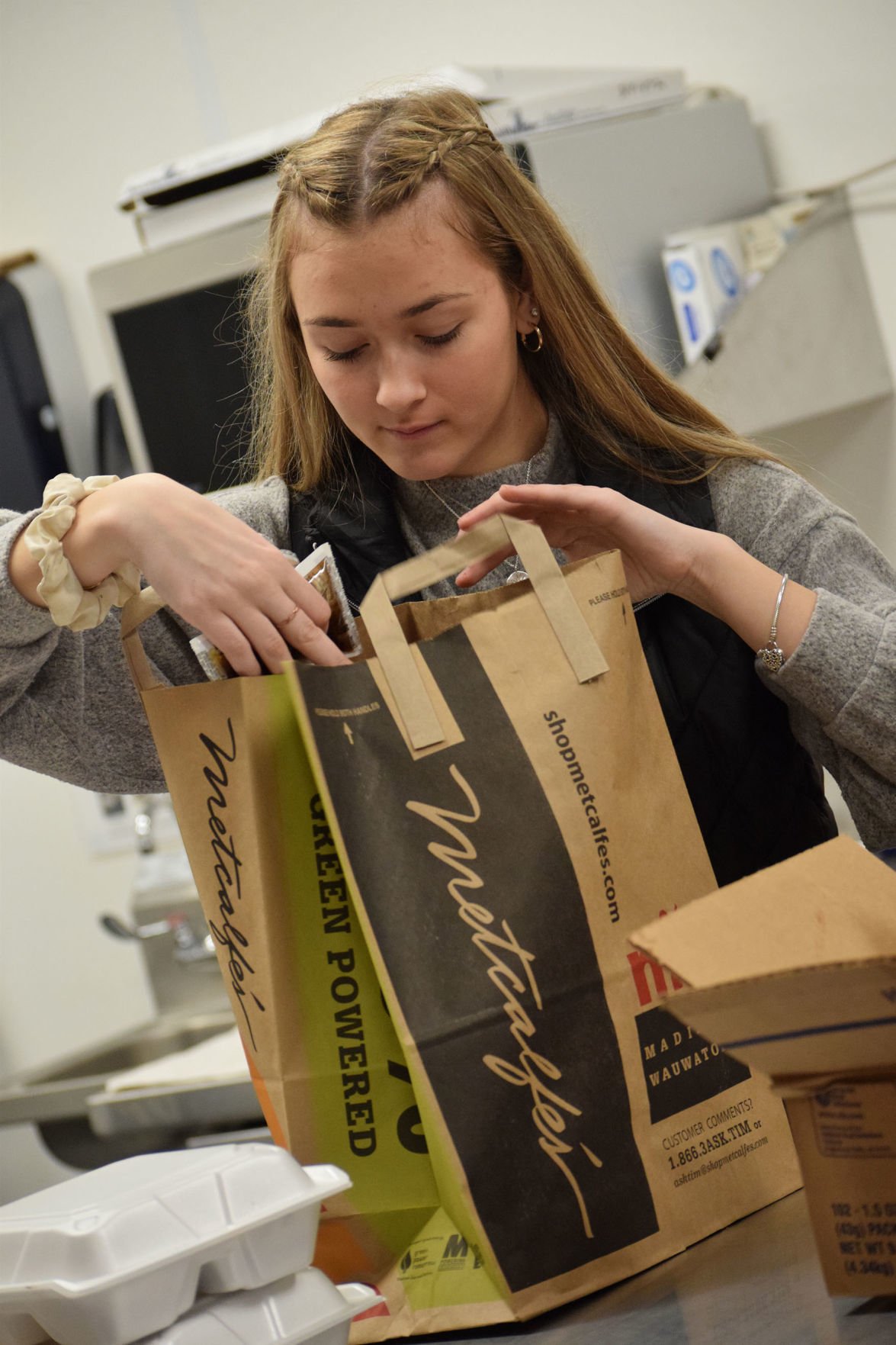 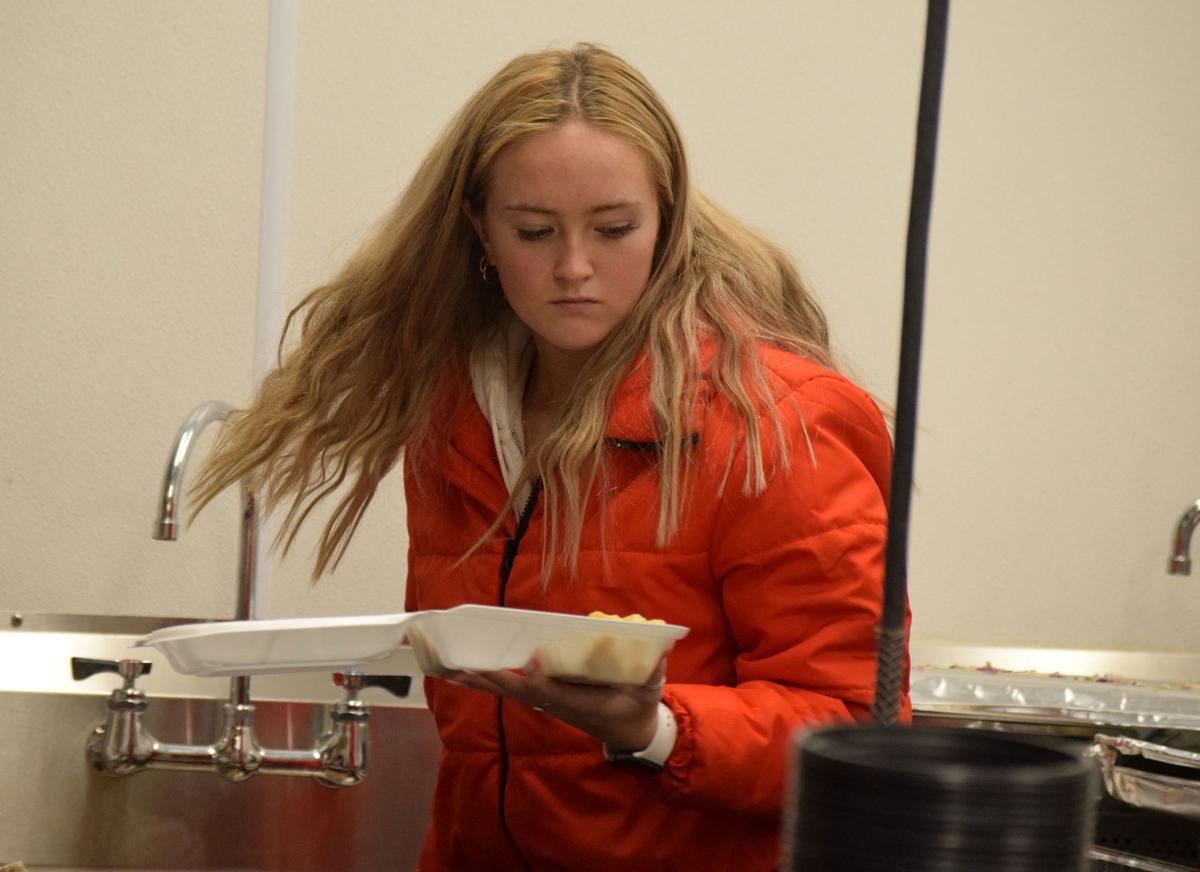 Volunteers were readying them for delivery to seniors.

On Thursday, eight volunteers gathered outside the center’s kitchen. Five were middle and high school students.

Armed with the grocery bags and lists of addresses, they ventured out into pouring rain to deliver the bags to seniors in Cambridge and Deerfield.

There was enough food in each bag delivered on Thursday to last through the weekend, said Vizvary.

Older adults, age 65 and over, and those with underlying health conditions, are at high risk for being affected by the coronavirus, the Center for Disease Control says.

And so, even more than younger people, local seniors are now isolated at home, Vizvary said.

And older people may not be as prepared as younger families for a prolonged stay a home, she said.

“They’re not stocked up like families are stocked up. They don’t have the room to have a week’s-worth or two weeks-worth of supplies,” Vizvary said.

Some seniors don’t live near family or are socially distancing themselves from family to avoid the spread of COVID-19. Many live alone.

“They’ve lived through hard times...To them now it’s scary because they don’t have family nearby,” Vizvary said.

About 20 seniors on Tuesdays, and 45 on Thursdays, would meet at the community center, eating with their friends and playing cards or BINGO.

It was a chance to socialize, eat a home-cooked meal, and connect with DCC staff on things they needed help with.

“My program was their big day out,” Vizvary said.

With churches and meal programs now closed to in-person gatherings, many seniors are now entirely cut off from their normal social circles, Vizvary said.

While a hot delivered meal can’t completely fix the social isolation seniors might now be feeling, it’s a chance for DCC volunteers to check in on them and to make sure they have what they need, she said.

“We’re trying to do the best that we can do for them,” Vizvary said. “Above everything they’re just lonely. You go two, three days without talking to somebody, that can wear on your psyche. That’s a long, long week.”

Vizvary said she is reaching out to other community members, including kids who aren’t in school at the moment, seeking cards, letters, drawings or art projects to send with the meals. She said these items will make seniors smile and show that others are thinking about them.

It’s “something they can put on their refrigerator,” Vizvary said.

DCC has a collection box outside its community room entrance, on the building’s west site, for cards, notes and drawings. Before going out to seniors, Vizvary said they’re being put for 24 hours into the center’s commercial freezer, to kill any germs to make them safe to deliver.

Vizvary said DCC is also encouraging seniors to call the center if they need someone to grocery shop for them or to pick up medication or other necessities.

So far, there’s been no shortage of local help on that front.

In the pouring rain on Thursday, Deerfield resident Alyssa Dunsirn dropped off six grocery bags full of meals to seniors living in Cambridge.

Dunsirn said she hopes the need draws out more volunteers in coming weeks.

“I think there are enough people that want to help the seniors, but I’m worried that they don’t know,” how they might contribute, Dunsirn said.

Last week was Dunsirn’s first time helping with the senior meal program, but she said she plans on continuing to volunteer during the shut-down. Three of her four teenage children — Ethan, Jake and Lily — also delivered meals on Thursday.

Dunsirn and her children have been calling neighbors and friends during the first week of closures and picking up groceries for people who need them.

She said she wanted to make sure their neighbors knew they were supported, and her children knew that helping others was the right thing to do.

“How do we as a community support them and let them know they’re not alone?” Dunsirn asked.

DCC staff say they’re not sure how the meal delivery program will fare going forward.

“I don’t really know what this next week is going to bring,” Vizvary said. “The meal part has been going well, as long as we can still get supplies in.”

DCC has “no intention of not running this program,” Schwenn stressed.

“We absolutely are planning on going forward with it. We know how important it is for seniors to have access to food or a hot meal once or twice a week,” Schwenn said. “We know how good it is for their well-being, for somebody to be checking in on them.”

Vizvary and Schwenn said DCC still has a very real operational need. Senior meals still may be running, but the center now has very little revenue coming in because most of its programs, like before-and-after-school programs, are cancelled until further notice.

“We still need to pay our water bill and our heat bill and our mortgage. We still have operational overhead,” Vizvary said. “We’re just trying to keep our head afloat, when no money is coming in.”

“At all costs we want to not have to charge them,” Vizvary said. “Five dollars is a prescription to them. It doesn’t sound like much to the everyday average person, but to them, it is.”

Schwenn said that last week, Second Harvest Food Bank had a influx of perishable items like sandwiches and yogurts, after UW-Madison donated items from its cafeterias that were closed. DCC received many of those items, and they were delivered to seniors in their grocery bags, Schwenn said.

Schwenn called those donations an “absolute exception to the rule,” that DCC won’t be able to rely on going forward.

“As we go on with this, we’re going to need to either pay for the food...or get our hands on it,” Vizvary agreed. “That’s not the norm to have that overflow of perishables.”

To arrange to have meals delivered, to volunteer, or for more information call DCC at (608) 764-5935 or email Schwenn at julieschwenn@yahoo.com.

McFarland Senior Outreach, that serves twice-weekly lunches for older Cambridge-area residents, says it is working to protect seniors and volu…