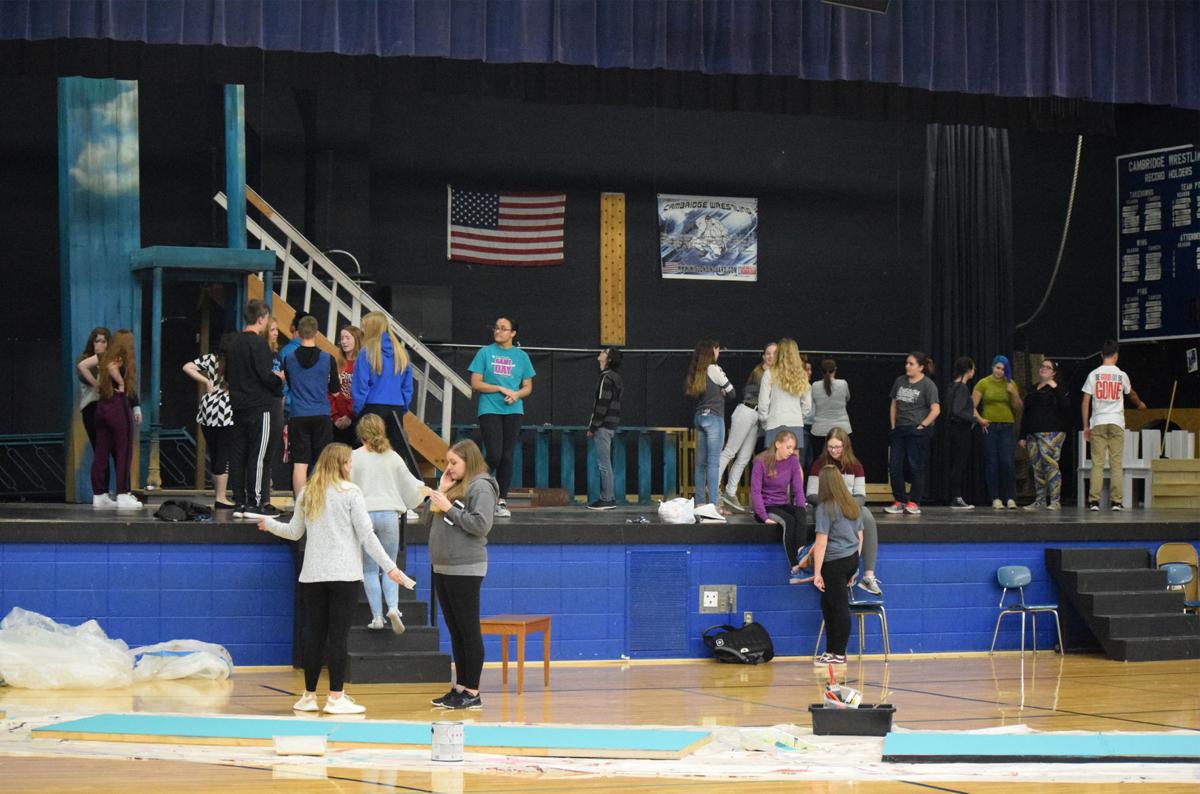 The cast of “Mamma Mia” practices in the gym. 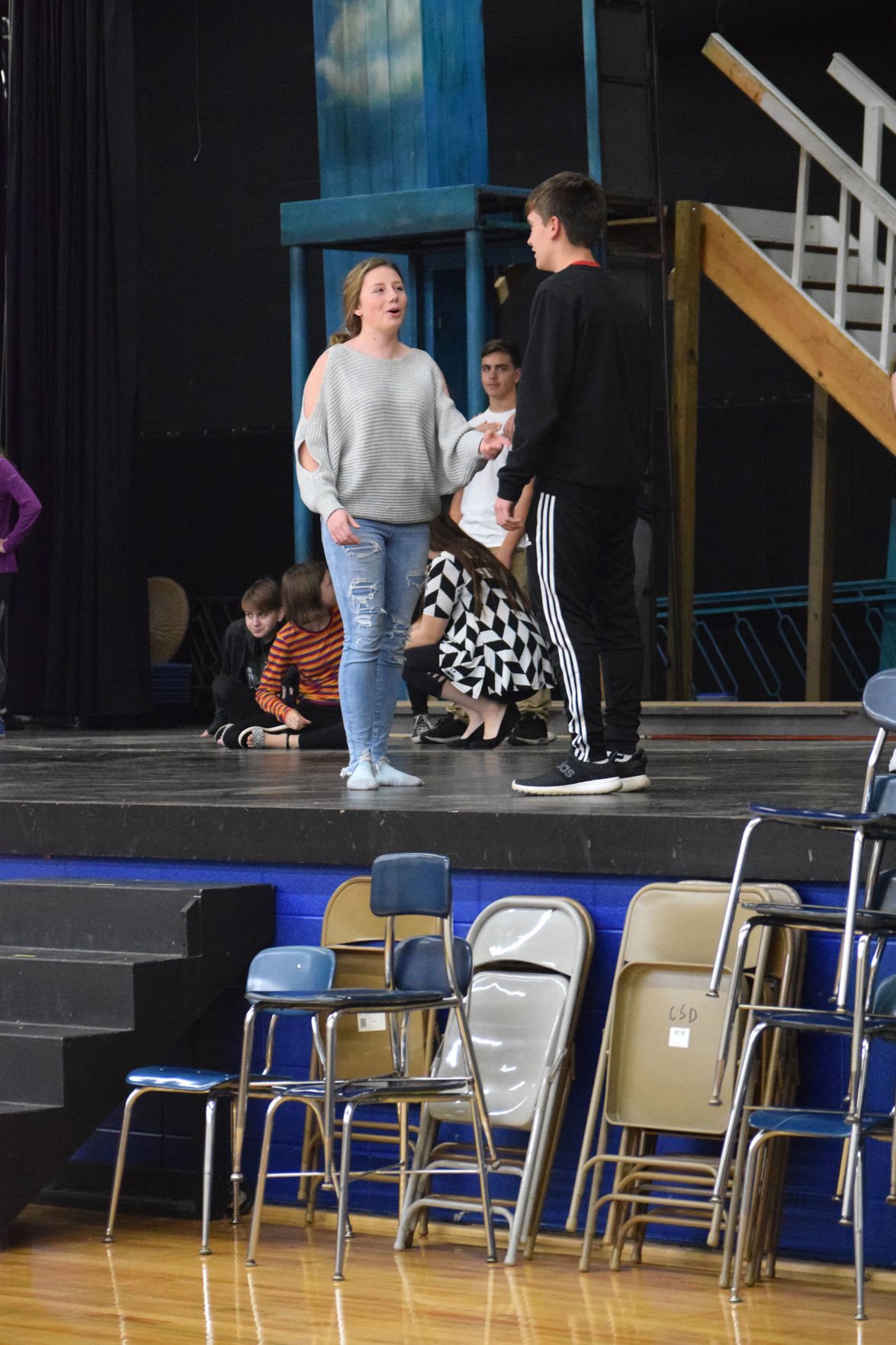 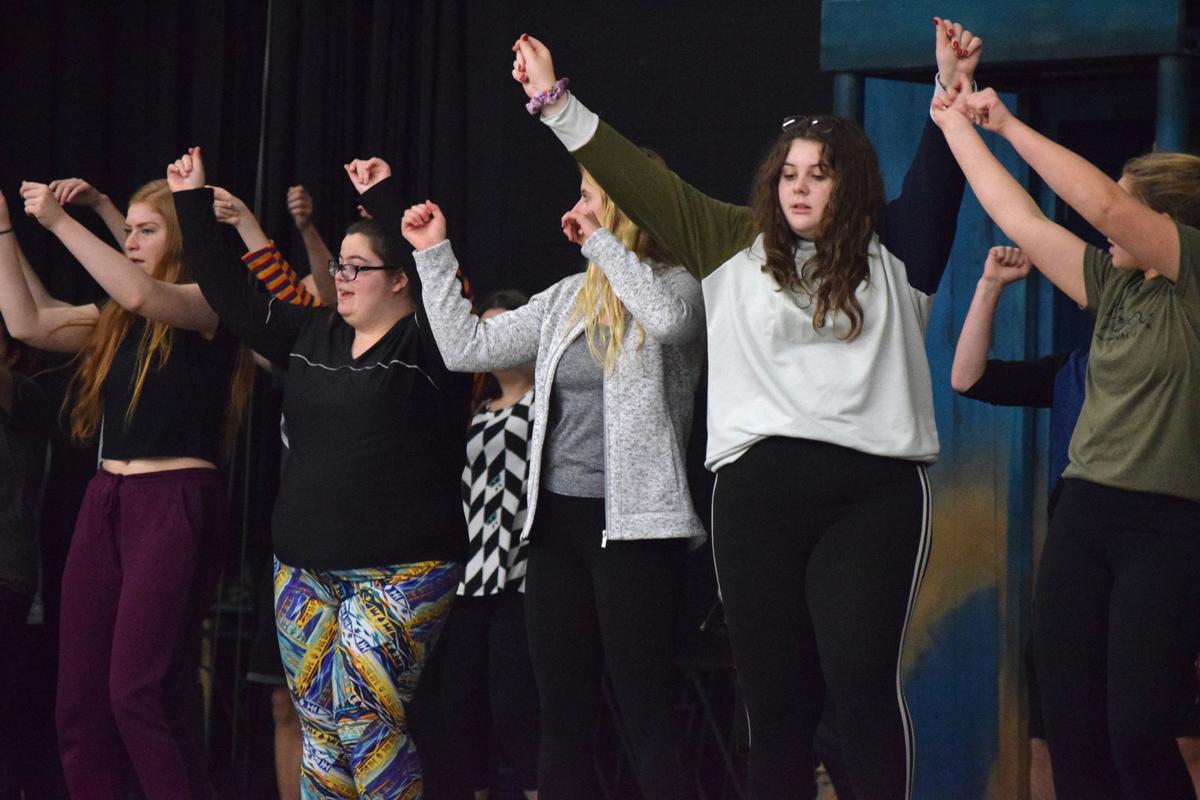 The cast of “Mamma Mia” practices in the gym.

Prepping for a Sunday rehearsal for Cambridge High School’s fall musical, co-director Jess Kindschi first sweeps dirt and grass off the stage in the school gym.

Such are the chores routinely required in a shared space.

The football team had held their halftime pep-talk Friday night on the stage of what’s commonly referred to by CHS students and staff as the “gymnatorium,” Kindschi explains.

“Before we could have rehearsal today, we had to take out the chairs and sweep up the turf,” she says.

In the fall, the “gymatorium” plays host to a broad spectrum of high school life: spirit squad practices, volleyball games, the annual Friends of the Library arts and crafts fair, physical education classes, the Homecoming dance, choir and band concerts and set-building and rehearsals for the musical leading up to the annual production.

This year’s musical is “Mamma Mia.”

On Nov. 8, 9 and 10, audiences will pile into folding chairs and bleachers. Cast members will wait below stage in football locker rooms for their entrances. The orchestra will sit in front of the stage, in a pit created with black fabric.

This could be one of the last years, however, that fall musicals, band and choir concerts and other music and arts-related events, take place in this busy space.

The Cambridge School District is exploring building a $13 million performing arts center, attached to the existing high school. A task force formed earlier this year to weigh the idea is considering recommending holding an April 2020 referendum.

Cambridge music teachers, students and administrators, can list a host of reasons to build an arts center.

“We have some of the very best athletic facilities in the area, but we have pretty inadequate performing space for our art students,” Superintendent Bernie Nikolay said in an interview this week. “We have great sports programs, we have great music programs, but the facilities don’t compare.”

With 89 percent of district students in performance groups, CHS Principal Keith Schneider said, “should we afford them a facility equal to our athletics?”

For the cast of a show like “Mamma Mia,” a performing arts center would mean higher-caliber productions, musical co-director and CHS choir teacher Katie Gerlach said.

Sets could be constructed in early fall, instead of two weeks before the show, she said. Sound equipment wouldn’t have to be torn down after events and stored in plastic bins, and students could rehearse on actual platforms instead of imaginary ones.

“It’s like telling the basketball team, ‘well you need to practice in the parking lot...we get one day in the gym before a game, and then you go and play your game,’” said CHS band director Nathan Gerlach. “It makes it challenging to actually perform at your best.”

“We set up a concert three times in a day, because we have to set it up for rehearsal, take it down for wrestling, put it back up,” said “Mamma Mia” student cast member Bella Mazzara.

With an arts center, students say they’d be better prepared to perform after graduating from high school.

“It would give students opportunities before they go to college, or wherever they want to go, to have that performing arts experience,” said Mamma Mia student cast member Peyton Zibell.

“We always want our students to have enough skill and to be at a level, that they can walk into a collegiate-level program,” join community theater or a semi-professional ensemble, Katie Gerlach said.

It would mean more students could get involved in the technical or visual art side of theater and become more well-rounded, said task force chair Margaret “Peg” Sullivan.

Students Grace Will and Mazzara say they want to pursue theater or music in college.

“I hope this never dies,” said Will. “I’m glad they’re trying to make it bigger and better, it’s the best thing…This is what I’m going to do with my life.”

Adding theater-technology classes, and having art and tech-ed students create sets, art, lights and sound would be “a natural extension” of the school’s theater curriculum, Schneider also said.

The school district’s early concept for a performing arts center is a 25,000-square-foot addition attached to the CHS’ northeast corner.

It is envisioned to include a 500-seat house, lobby, storage spaces, dressing rooms, restrooms and a set deck.

“I do think it’s going to come down to whether the community thinks the cost is something that we can afford,” Nikolay said.

Other features being eyed, like secondary performance space, an orchestra pit and a fly system to lift sets above the stage would all have additional costs, Nikolay said.

Community members are “bound to have sticker shock when they see a number,” Nikolay said. “And I had the same sticker shock. But I’ve also learned that these spaces are very expensive to build.”

The number of seats, square footage and amenities can be scaled down, Nikolay said. The task force is also exploring an alternative location on the building’s west side, in part to see if that might come in at a lesser cost.

Schneider also said he sees the cost going down before a referendum.

“Obviously we have to be fiscally responsible with any amount of money we would ever levy against our tax base,” Schneider said. “What is that number that the community would entertain a vote for?”

However, administrators said they don’t want dissatisfaction if they “build this expensive building and it doesn’t meet our needs,” Nikolay said.

“In the end it’s not worth doing if it’s not something we can be proud of,” Nikolay said.

There are lingering questions for taxpayers, Schneider acknowledged, like how much the new addition would cost per property owner and for how many years school district property owners would be paying the project off.

Schenider hopes those questions will be ironed out in November.

If taxpayers have concerns, the district wants to know early in the conversation.

The task force this fall hired School Perceptions, a Slinger Wisconsin research firm, to gauge community reaction in a survey mailed to all district households. It could be completed online or on paper. The task force has received more than 800 responses since Oct. 4.

School district residents have until Nov. 4 to complete the survey. Results will be evaluated at a task force meeting on Nov. 12.

“As much feedback as we can get back will help direct the task force on where to go next,” said Nathan Gerlach.

“I think it’s time for the community to weigh in,” Nikolay agreed.

“Let’s have an honest discussion with the community. Is it the right time and how big is it? How many seats does it hold, how much would a potential (performing arts center) cos? And would the community be willing to entertain that as a referendum?” Schneider said.

The idea of adding a performing arts center to the high school has floating around for a while. The school district initially considered including an auditorium in a referendum that passed in 2012, which paid for renovations to Cambridge High School like redoing the commons, raising the roof, moving the front office and updating the library. Before the referendum was sent to voters, however, the auditorium question was pulled.

“The primary focus was to really update this 1969 building,” said Schneider. “The scope was just to try to modernize and get the high school moving along in the right direction. But there was support for a (performing arts center) a number of years ago.”

Administrators say now may be the time to revisit the idea.

An auditorium is ”the last large piece that this district is missing,” Nikolay said.

“What will continue to make this district a progressive, high-performing district? What’s next?” Schneider asked. A performing arts center “would be our last component to make our district competitive with anyone around us,” he said.