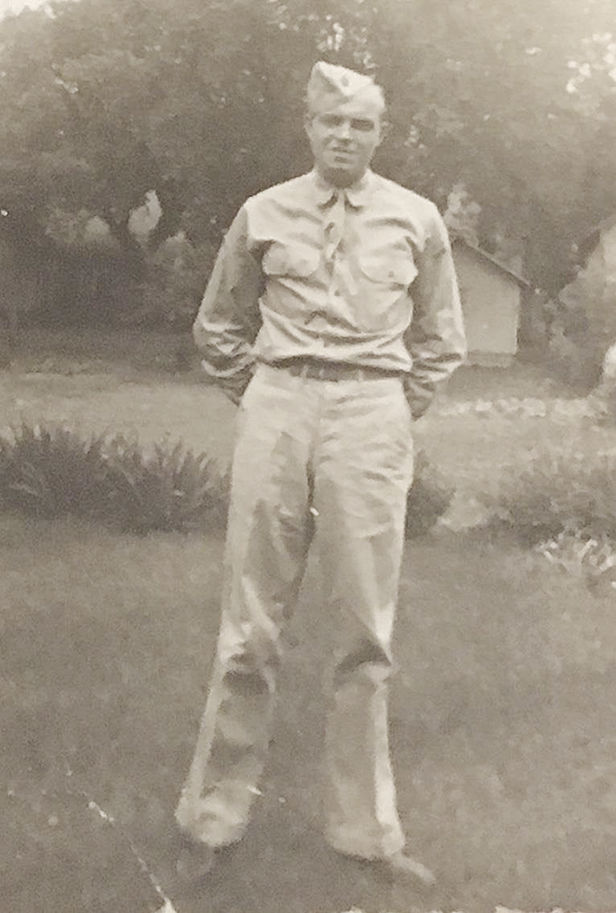 The remains of U.S. Army Sgt. Robert W. McCarville, the uncle of longtime DeForest resident and Dane County Board member Maureen McCarville, were finally returned to American soil in early November. It took until this past July to account for Sgt. McCarville.

The remains of U.S. Army Sgt. Robert W. McCarville, the uncle of longtime DeForest resident and Dane County Board member Maureen McCarville, were finally returned to American soil in early November. It took until this past July to account for Sgt. McCarville.

Soon after the doorbell rang, there was a scream.

The sound chilled one of Maureen McCarville’s aunts, Monica Partlow (McCarville). Word had just reached the family that Maureen’s uncle, and Partlow’s father, had died in World War II. Partlow remembered her mother’s reaction to the news of her husband’s death in sharing the story of that black day.

“She said she never heard her mom crack like that,” said McCarville, a longtime DeForest resident who represents the village on the Dane County Board of Supervisors.

The tale didn’t end there. It has a lot of twists and turns, but after a wait of more than 75 years, the remains of U.S. Army Sgt. Robert W. McCarville, 24, of Beloit, who died in action Dec. 5, 1942, finally made it home in early November. He was Maureen’s dad’s brother, the oldest of 13 children. There were eight boys and five girls.

Maureen was on the tarmac with her cousin Robert Ricksecker at Milwaukee’s Mitchell International Airport when the plane carrying her uncle arrived home.

In a family of 13, Robert was the oldest child. While the news of Robert’s return was cause for celebration for most of the family, it was hard on Maureen’s 96-year-old aunt.

“In her mind, it brought up old wounds,” said Maureen. “It was tough because we had to bury him again.”

A memorial service was held in Beloit after a convoy accompanying a hearse traveling from Milwaukee and carrying her uncle made it to its destination. Of those who attended, 75 were just family. That didn’t include the military and veterans groups who were also there.

For the duration of the journey, a sergeant was assigned to the family. During the ride, members of military, police and EMS units stopped on overpasses and saluted the old soldier. It was like that all the way from Milwaukee to Beloit, said Maureen.

“It was the fifth time he had been moved and buried,” said Maureen. “I would like to think that every step brought him closer to home.”

As Partlow remembers it, the women were working in the kitchen, making care packages for the soldiers fighting overseas. It was sometime before Christmas, but after Dec. 18, and they were just cleaning up. They were so happy.

Then, everything changed in an instant.

What is known, according to Maureen McCarville, is that Robert W. McCarville was killed in the Battle of Buna-Gona in what is now known as Papua, New Guinea. The battle for New Guinea is recounted in the James Campbell book “The Ghost Mountain Boys.”

Robert McCarville was a member of Company L in the 128th Infantry Regiment, 32nd Infantry Division, sent to the South Pacific to battle the Japanese.

It was tough duty, as the soldiers battled intense heat, malaria and other diseases, as well as the enemy. Having been diverted to the South Pacific, the 32nd Brigade was ill-prepared for what they would encounter.

“They were farm boys from the Midwest,” said Maureen McCarville, a veteran herself, who also served in the 32nd Brigade. “They were supposed to be sent to the European Theatre. They were doing the best the could. They were not trained to work in the heat of the jungle.”

There was a huge airbase that Gen. Douglas MacArthur wanted to take at all cost, according to Maureen. Things were heating up, she said. An assault was in the offing.

Robert McCarville and his fellow soldiers made their move Dec. 5, 1942. From what is known, they ran into a nest of Japanese gunners and he took a shot to the head.

Maureen McCarville said the fighting was so fierce that they couldn’t go back to recover the bodies until Dec. 18. Her uncle was buried in a makeshift grave near where he was killed. In 1945, according to a press release from the Defense POW/MIA Accounting Agency (DPAA), his platoon leader remembered recovering the remains, which a burial detail disinterred in January 1943. They were transferred to a small cemetery on the beach at Cape Endaiadere, the agency detailed, noting also that those of an unidentified American soldier were buried at the U.S. Duropa Plantation Cemetery #1 on Jan. 6 of that year. In March 1945, according to the agency, those same remains were moved again, this time to U.S. Armed Forces Cemetery Finschhafen #2 and were designated “Unknown X-34.”

The set of remains of X-34 was one of approximately 11,000 exhumed by the American Graves Registration service in 1947. Sent to the Central Identification Point at the Manila Mausoleum in the Philippines, X-34 could not be identified. They were then interred at Fort McKinley, now the Manila American Cemetery and Memorial. Robert W. McCarville’s name was included on the Wall of the Missing at the Manila American Cemetery and Memorial.

A letter written to military higher-ups from Maureen McCarville’s grandfather that their son had not returned. It got a response. A commander wrote back saying he was sorry for their loss and that the country would never rest until he was brought home. It took some time to make good on that promise.

Flash forward to the 2000s. President Barack Obama’s administration had pushed to get a project funded to bring home missing soldiers.

On Nov. 4, 2016, X-34 was disinterred to have his remains analyzed by the DPAA. More sophisticated means of identifying DNA had been developed. Using dental and anthropological analysis, along with other means of analysis from the Armed Forces Medical Examiner System, Sgt. McCarville’s remains were accounted for on July 10, with publication of the positive ID coming five days later.

Family came from all over to attend the memorial service, even as far away as Colorado and Minnesota. Gov. Tony Evers ordered that flags be flown at half-staff that day. Secretary of Veterans Affairs for Wisconsin Mary Kolar was also there. Maureen McCarville, who has lived in DeForest since 1980, had met Kolar in May through her involvement with the county board.

When the body arrived at the airport, nobody was allowed to leave the plane until the casket was taken off the plane. Maureen said she asked to touch the remains.

“It was so surreal anyway,” said Maureen. “I wanted something tangible that I could know and feel something.”

That night they sat around and chatted, meditating on how they had reached this point. The next day, there was a private gathering. Her aunt was given all of Robert’s medals, including the Bronze Star, Purple Heart, Good Conduct Medal, the Combat Infantryman Badge, Asiatic Pacific Campaign Medal, Presidential Unit Citation and American Defense Service Medal.

There was a group of singers and a general gave a talk about service and sacrifice.

“I watched my aunt through the whole thing,” said Maureen, who added that she lit up at seeing the medals.

His remains were in relatively good condition. Maureen said the family was told they were lucky to get that much of him back, even though his feet were missing. Robert received a full military burial. She said the image of him wrapped up like a mummy will stay with her.

As a child, Maureen remembers being at her grandmother’s house and seeing Robert’s picture.

“I can’t tell you how many times I asked about my uncle,” said Maureen.

Now, she and the rest of the family have some closure.

From the stories she was told, Maureen heard about Robert enlisting in the military after Pearl Harbor. Recruiters had set up at the local library. He and his friends were determined “not to take it lying down,” she said.

Coming from a military family, Maureen enlisted and went to boot camp in 1979, coincidentally ending up as a medic in the 32nd Infantry Brigade. Over the entirety of her career, she had four enlistments in the Wisconsin Army National Guard, spanning 1979 to 2004. As part of the 132nd Support Battalion, she worked in records processing, helping to update records for different Guard units to get soldiers’ benefits, medals and other commendations.

In all, three members of her family have served in the 132nd Brigade. And they’ve seen their share of anguish, as her mother’s brother, Paul McKittrick, never returned from Korea.

Her work in records has been important to her. She says she’s on the front side in repatriation efforts.

“Just making sure they’re as detailed as possible and correct, so that all that is there is there, so that other families don’t have to go through as much as we did,” said Maureen.

Since 1980, Maureen has lived in DeForest, although she grew up in Iowa and attended high school in Beloit. She earned a Bachelor of Arts degree in business management from Upper Iowa University – at the Madison campus – in 2000. She’s worked for Madison Gas & Electric for 30 years.

Maureen said the family is happy to have Robert back. She hopes that as technology improves, there will be more attention to detail with record-keeping and more that is documented about American soldiers.