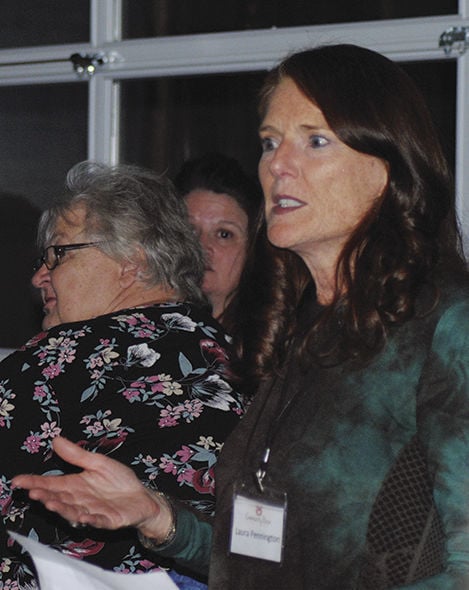 Laura Pennington, president of Community Purse, Jefferson County, discusses the funds raised in the last four years by the group. 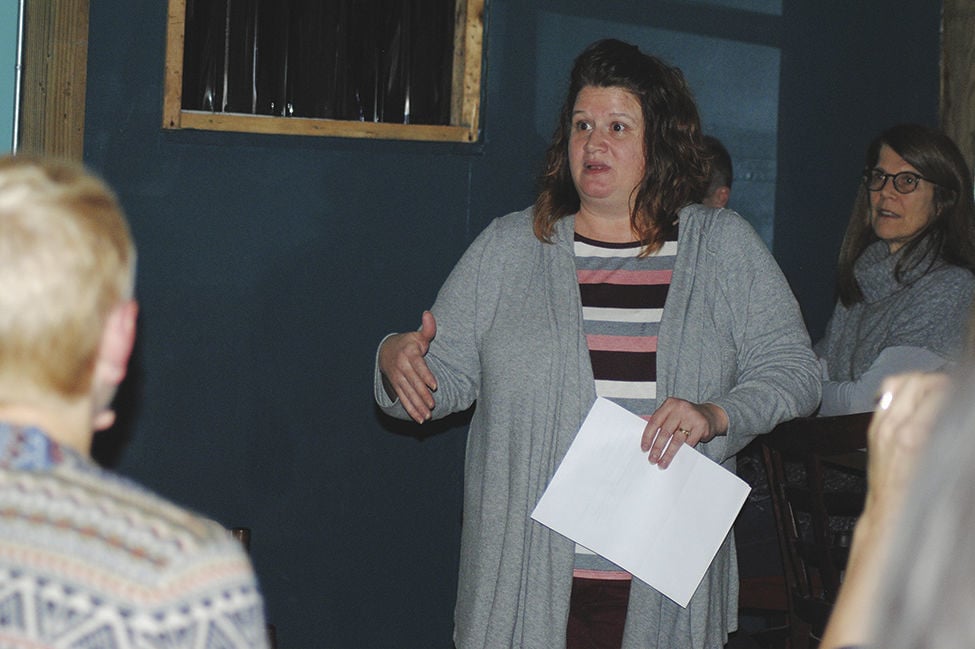 Sarana Stolar of Adoration Abode in Watertown is seen talking to the women of Community Purse at a recent meeting. The nonprofit was selected to receive funds from the group.

Laura Pennington, president of Community Purse, Jefferson County, discusses the funds raised in the last four years by the group.

Sarana Stolar of Adoration Abode in Watertown is seen talking to the women of Community Purse at a recent meeting. The nonprofit was selected to receive funds from the group.

After four years in Lake Mills, Community Purse, Jefferson County has raised $18,000 for various nonprofits in the community. The group hears presentations from nominated charities, last week when the group met Nov. 14 at Sunshine Brewery, the charities were Christmas for Kids through St. Vincent de Paul and Adoration Abode.

After the presentation there is a question and answer period and each member votes for one of the featured charities. Once the votes are tallied, the selected charity is announced and then each member donates directly to this charity, either electronically or by check. Members agree to support the charity that the group selects with a donation, even if it was not the charity for which they voted.

In the past, three charities would present at each gathering with the two who were not selected walking away empty handed.

“We’ve had some presenters who’ve come multiple times and have not been granted and it’s hard for them to come back,” said Laura Pennington, chapter president. “All the charities are so deserving.”

The group has been awarded the round-up at Lake Mills Market in February and hopes to use any funds generated through that program to give grants to both charities who present at each meeting.

“We will have a total of eight charities we will support through presentations and awareness and we will grant one of the charities as the grant recipient and the runner-up will also receive a grant.”

“It’s really going to help us bless the organization,” she said.

The group heard from past grant recipient Lake Mills EMS, who will use the funds they received to purchase a new Life Pack. They are hoping to earn the rest of the funds for the Life Pack at the EMS Chili Supper on February 22.

The presentations started with Sarana Stolar of Adoration Abode in Watertown. The non-profit offers transitional housing for men and tangible needs through the thrift store Thrift of Hope.

“From the very beginning we’ve had homeless people living in our house,” Stolar said. Her husband is the pastor of a small church in Watertown. “That’s where it started. We saw a need and we tried to meet the need.”

They’ve tried to start up several different homeless shelters in Watertown. They used to have one for women and children but Stolar said funding is always an issue.

“We are a non-profit organization committed to helping the homeless and those who are in need of food, shelter and clothes.”

Adoration Abode is an umbrella for a lot of different ministries including Thrift of Hope, transitional housing, they offer a free food pantry twice a week and do homeless outreach in other cities.

The group is getting ready to open another transitional home for men at the site of the former alternative high school in Watertown.

The group then heard from St. Vincent de Paul’s Christmas for Kids secret shoppers, a retired couple who spend their year shopping for students in need. They have racks of new warm clothes for children in their basement.

“It started with we wanted to help someone at Christmas time,” the anonymous shoppers said.

“The schools said we don’t need toys, we need warm clothes and I said, ‘you bet,’” the shoppers said.

The schools give sizes to the volunteers to purchase for the in-need students. They get coats, boots and snow pants and all the cold weather gear children need in Wisconsin.

“St. Vincent de Paul is our home base, but we do all to packaging in our basement,” they said. “It’s a fun project.”

They also give homemade blankets. All the clothes they give are new.

“We want them to have a little self-esteem.”

They give the extra clothes after the holiday season to the schools to be used at all times of the year.

“Our hearts are with the kids,” they said. “Working together to help each other, that’s God’s way.”

The group voted to give the funds for the night to Adoration Abode, but Christmas for Kids didn’t walk away empty handed either.

The group originally started in Illinois. The financial commitment is $200 to help support the local organizations, $50 per meeting. The network of women has no commitment, no fundraising, no event planning or silent auctions, but in the span of an hour $2,500 is raised for a deserving charity.

Those who are interested are always invited to join. They are also looking for other nonprofits to present at their meetings. For more information contact Laura Pennington at 847-295-8466.