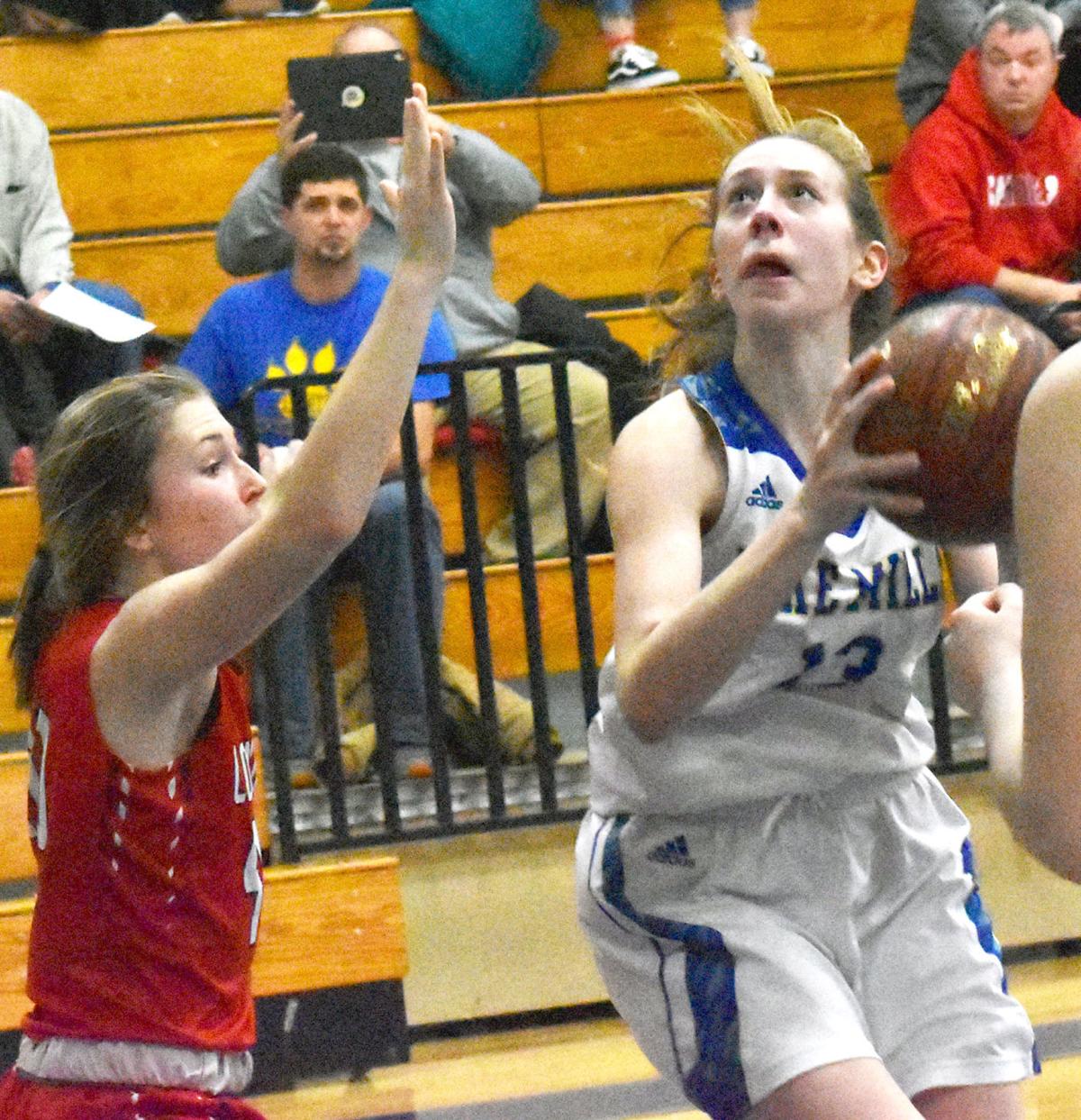 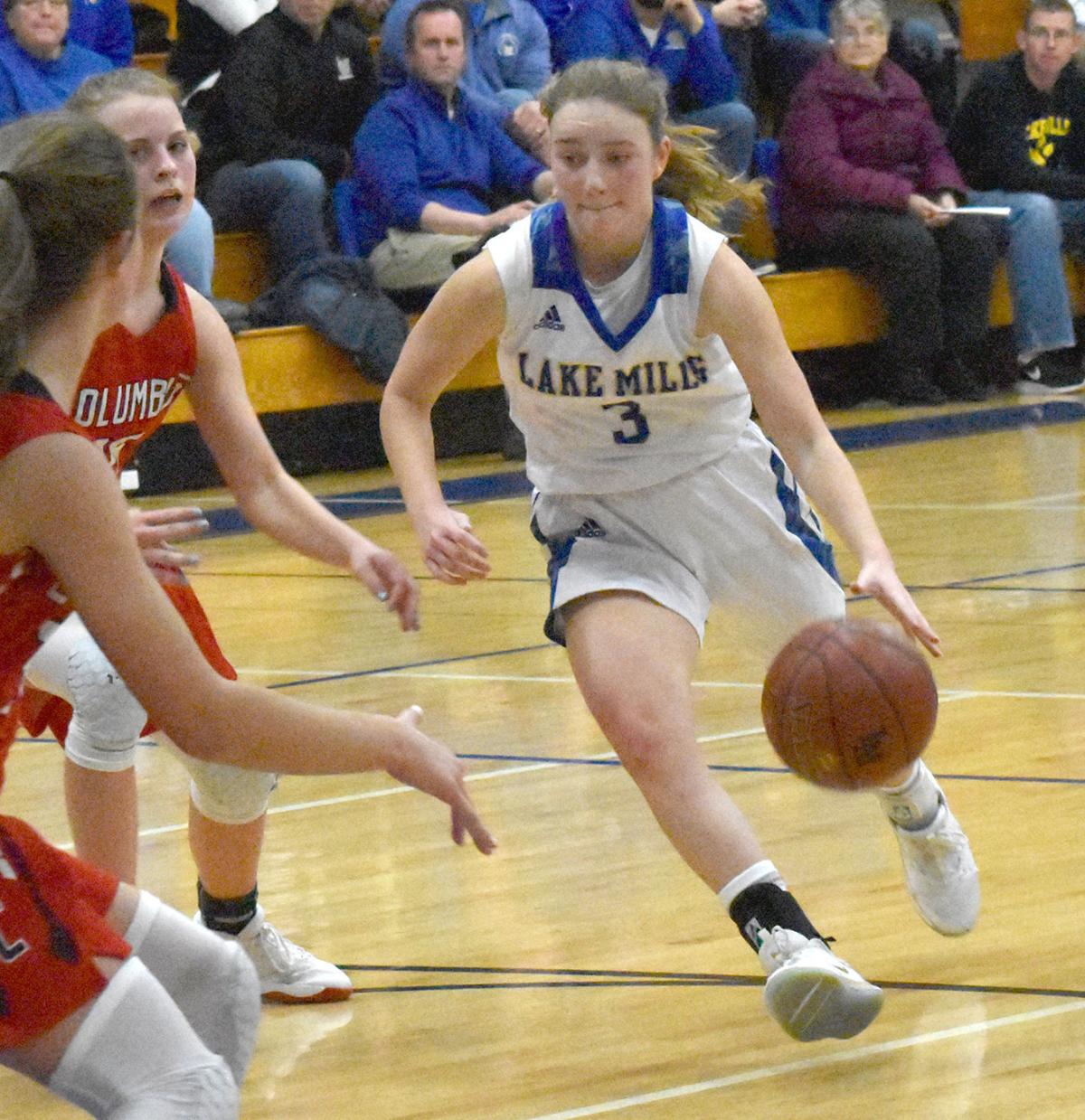 Lake Mills junior guard Julianna Wagner dribbles into the paint against Columbus in a Capitol North game at LMHS on Friday. Wagner scored eight points in the L-Cats’ 77-37 victory. 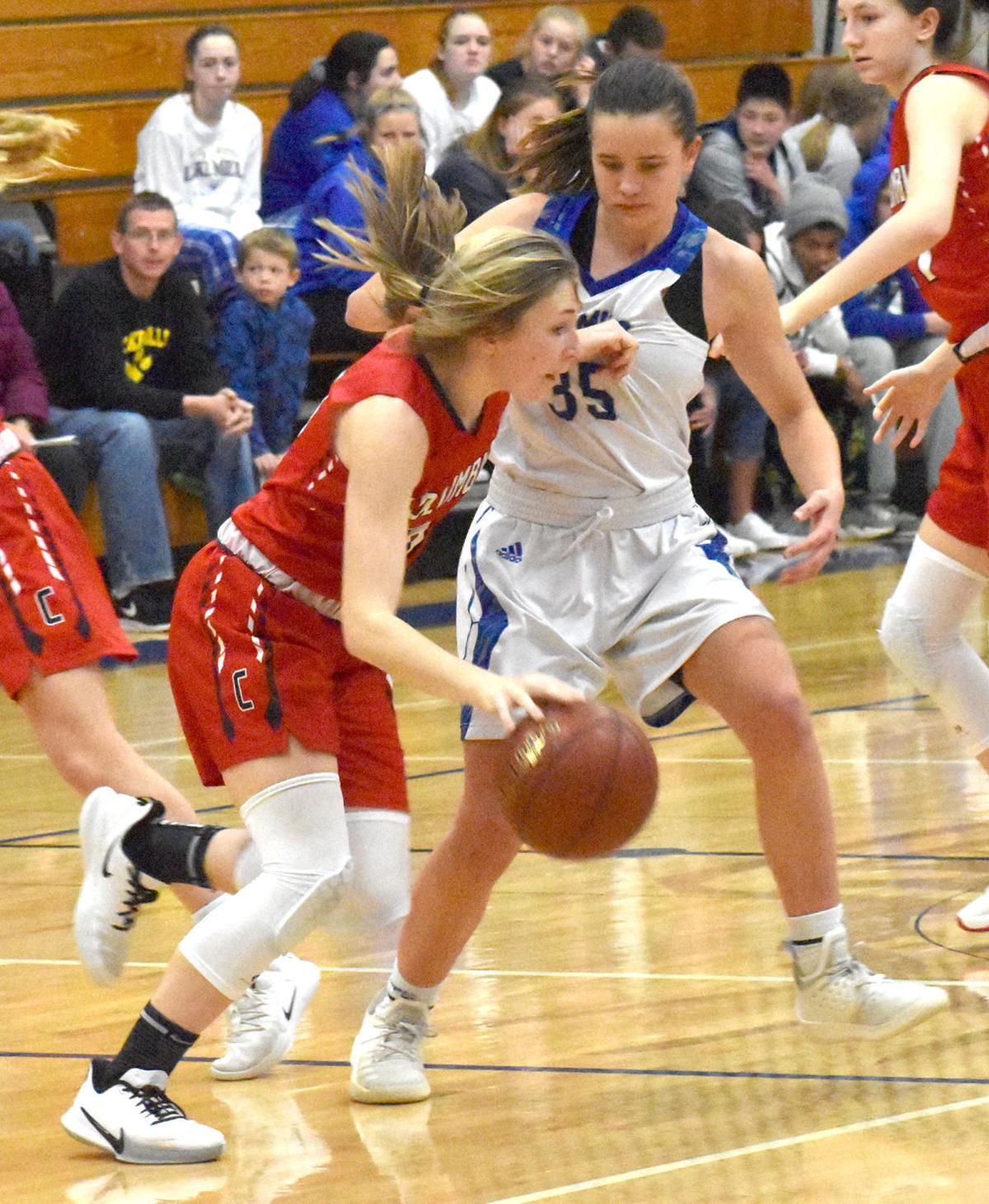 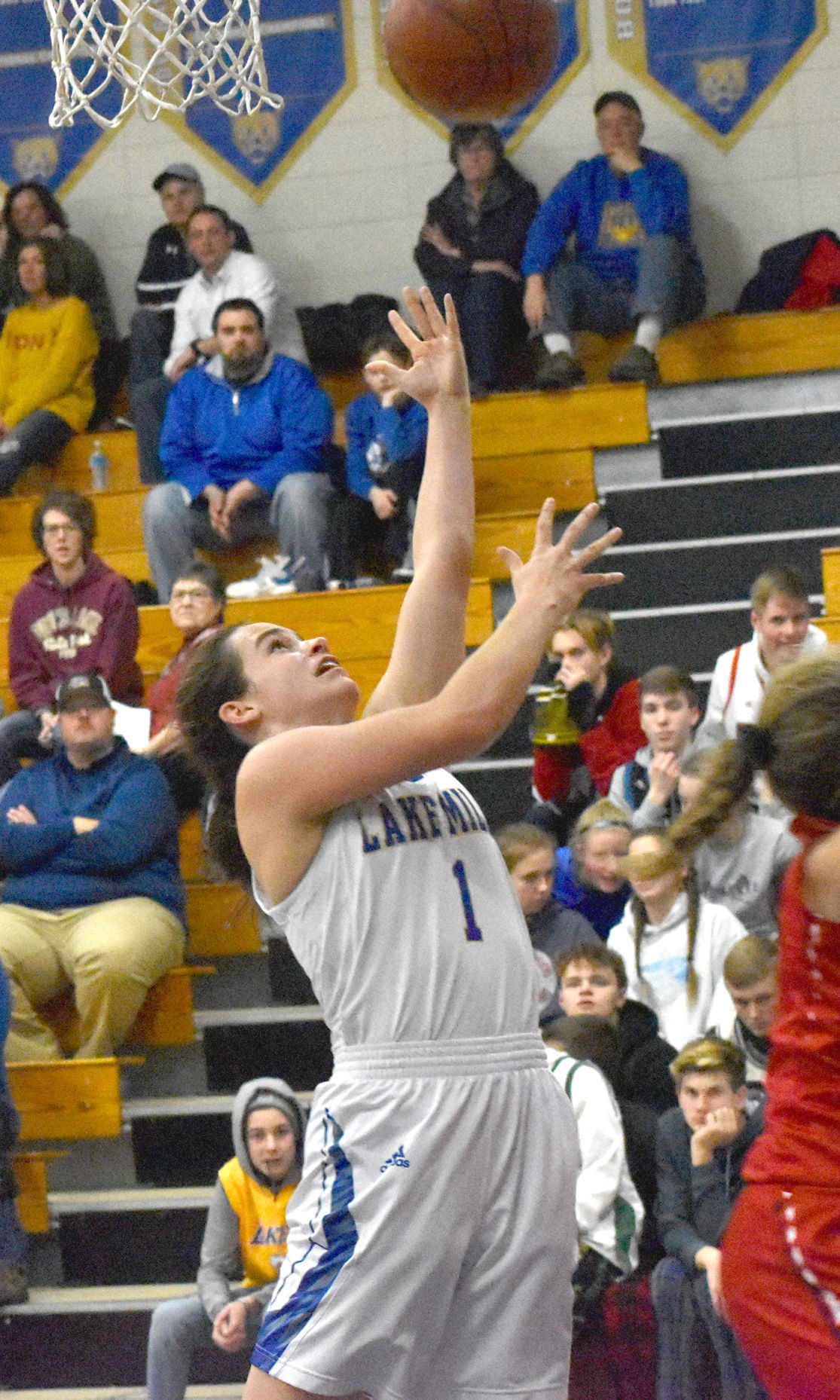 Lake Mills junior guard Taylor Roughen scores inside during a Capitol North game against Columbus on Friday at LMHS. Roughen scored 12 points in the L-Cats' 77-37 victory. 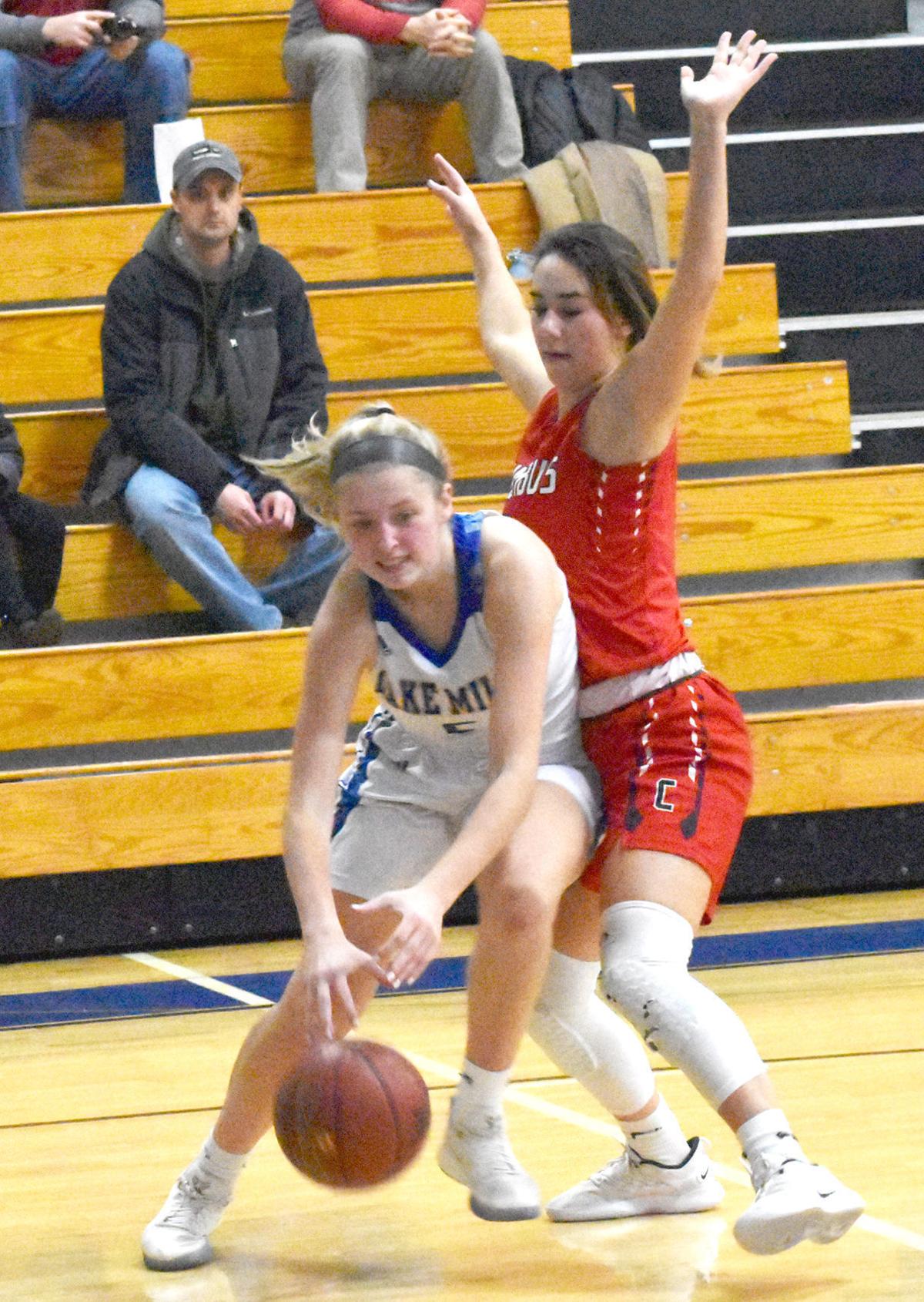 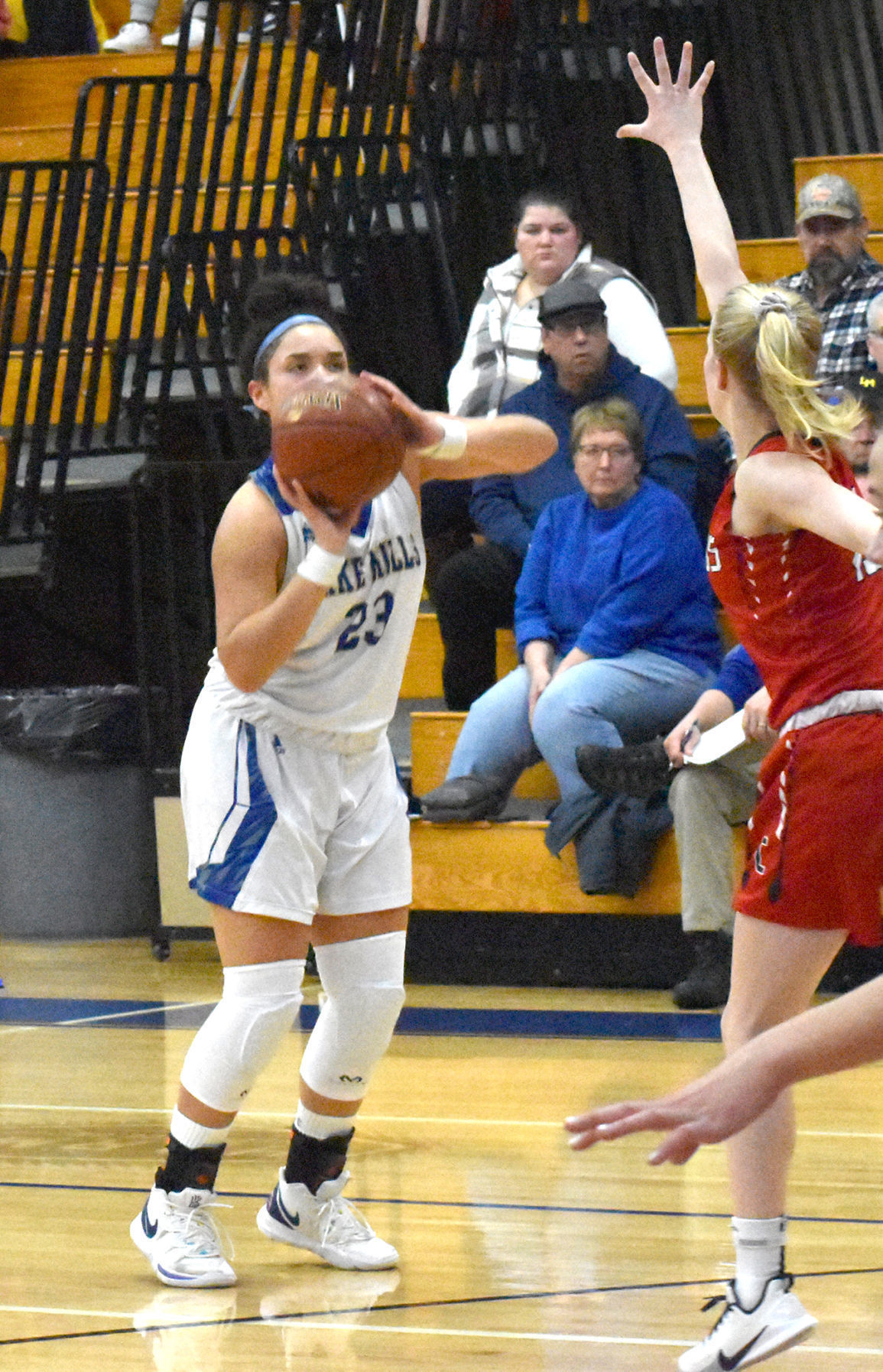 Lake Mills junior guard Julianna Wagner dribbles into the paint against Columbus in a Capitol North game at LMHS on Friday. Wagner scored eight points in the L-Cats’ 77-37 victory.

Lake Mills junior guard Taylor Roughen scores inside during a Capitol North game against Columbus on Friday at LMHS. Roughen scored 12 points in the L-Cats' 77-37 victory.

Not wind, nor rain, nor snow could stop the L-Cats.

Junior center Vivian Guerrero notched a season-high 22 points as the Lake Mills girls basketball team scored 53 first-half points in a 77-37 victory over visiting Columbus in a Capitol North game bumped ahead 90 minutes due to impending weather on Friday.

Guerrero scored in a variety of ways.

“We got her on a few rolls in our pick-and-roll game,” Lake Mills girls basketball coach Brandon Siska said. “She scored quite a few baskets crashing the boards and getting putback baskets. It was an outstanding effort tonight. She had a few deflections, a few steals and a fast-break layup. She kind of did everything tonight.”

Lake Mills (14-1, 3-0 Capitol North) led 25-4 in the early going. Guerrero made a layin before sophomore forward McClain Mahone hit from beyond the arc, increasing the lead to 42-14 with 4 minutes, 30 seconds to go before the break. Mahone found junior forward Hannah Lamke for a 3, one of her four 3-pointers, that upped the lead to 30.

Junior guard Taylor Roughen, who scored 12 points, scored on a breakaway and junior point guard Julianna Wagner hit a 3 from the wing as time expired in the first with the L-Cats ahead, 53-21.

“We played really well in the first half. We shared the ball, shot it well and did a good job getting to the rim,” Siska said. “I think it started on the defensive end. We were really locked in to start the game. The last two practices have been the best two practices we have had. Even though we have all our bodies, we aren’t fully healthy yet. We are getting there.

“We are starting to play better basketball than earlier in the season so we are excited about that. If we start playing first halves like that it makes my job less stressful.”

Columbus (5-7, 0-3) netted just 16 second-half points, failing to develop any flow in the half-court and struggling with turnovers.

Wagner and Guerrero each scored inside and Mahone hit from beyond the arc, making it 60-23. Two 3-pointers from Lamke made it 70-30 halfway through the second frame. Wagner drove inside and kicked to Mahone, who hit from the corner to push the lead to 41.

“We were locked in defensively and were doing a great job communicating with each other,” Siska said. “Our effort was outstanding. We did a great job closing out on shooters, getting hands up. I thought we put a ton of ball pressure on them and forced some turnovers.”

Lake Mills plays at Poynette in a league game on Thursday at 7:30 p.m.