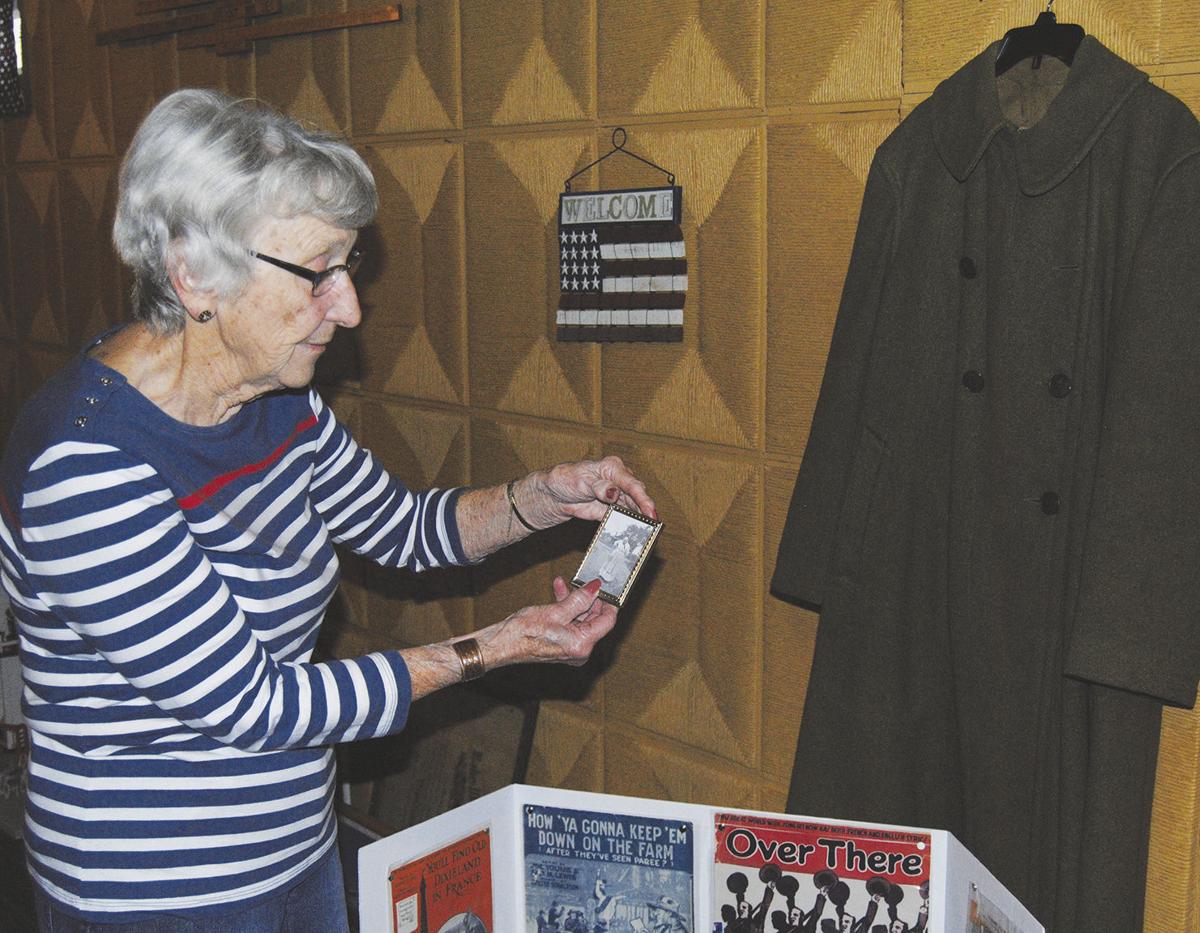 Beverly Stelse of Lake Mills looks at a photo of her grandmother, which her father kept in his pocket when he was in WWI. 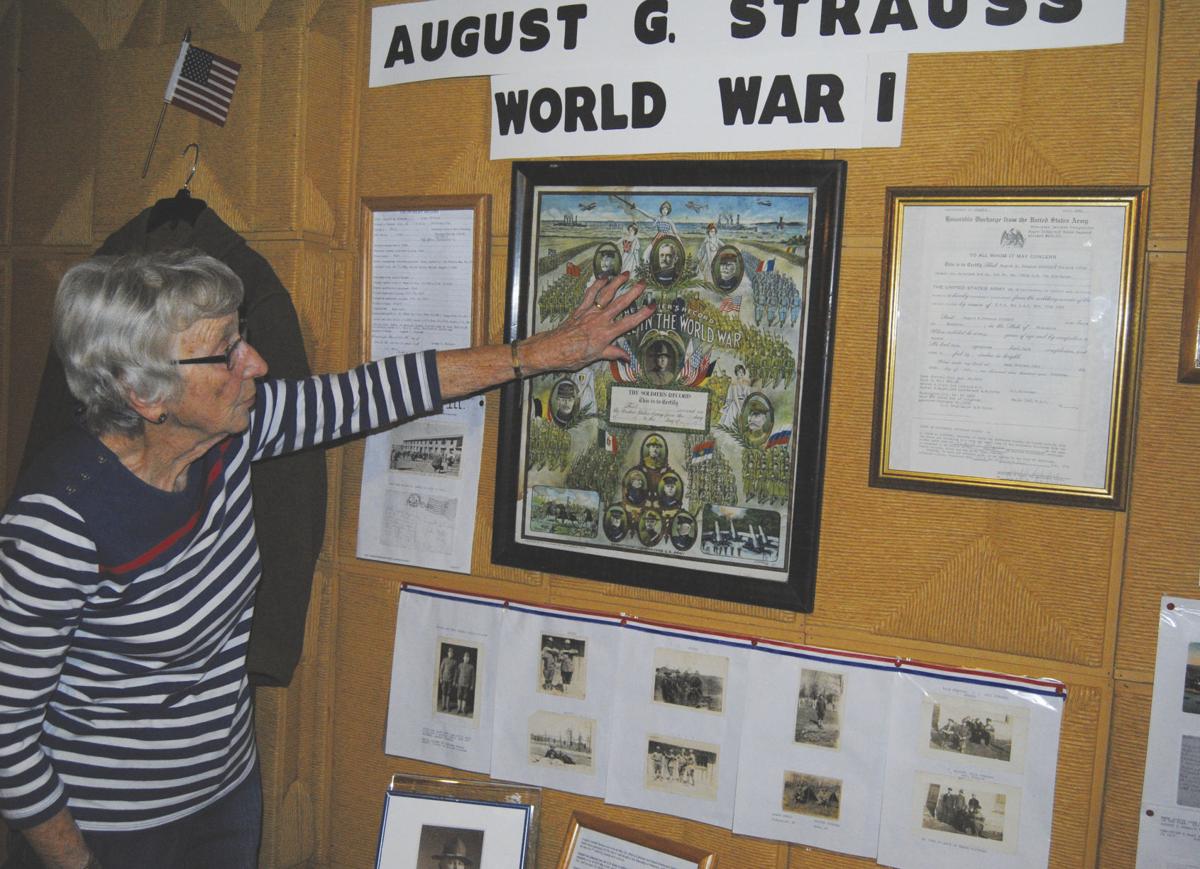 Beverly Stelse points to a photo of her father in the basement of her Lake Mills home. August Strauss fought in WWI. 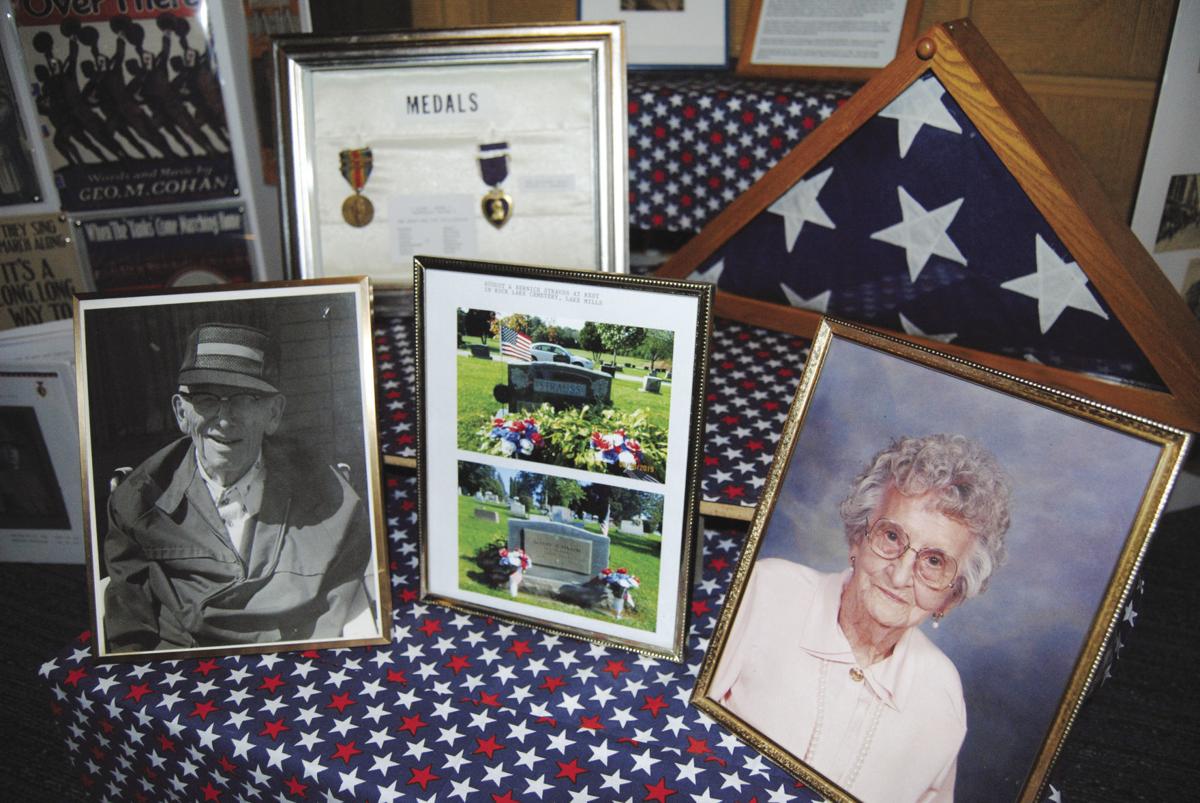 Photos of Beverly Stelse’ parents are seen in her basement. 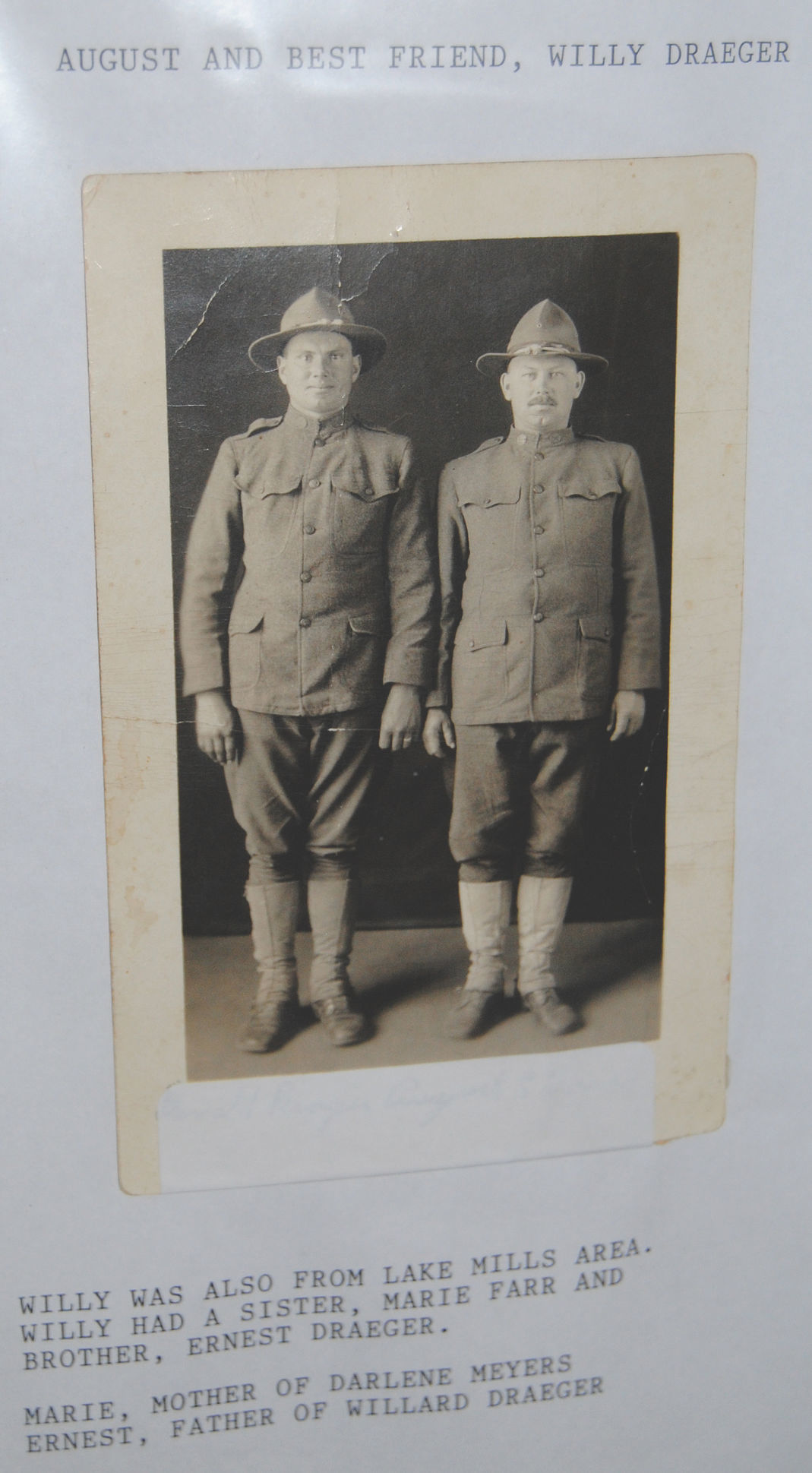 August Strauss is seen at left with his friend Willy Draeger of Lake Mills. 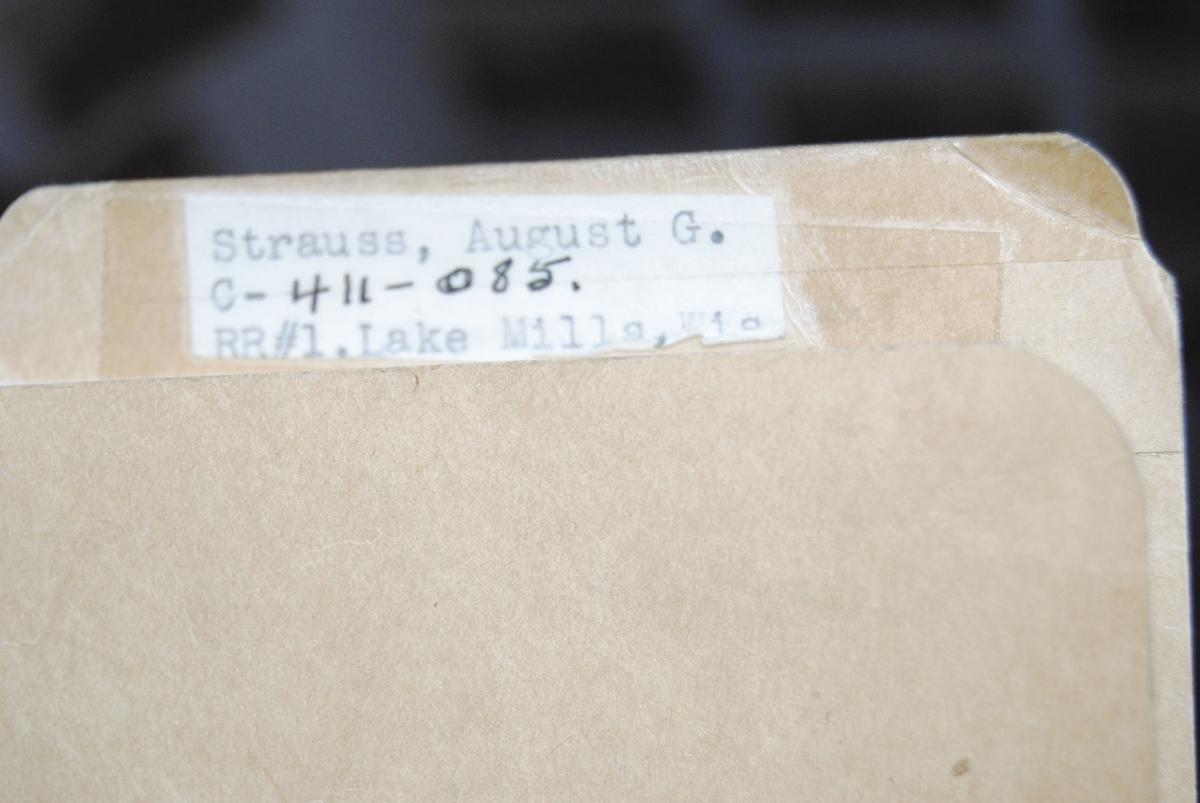 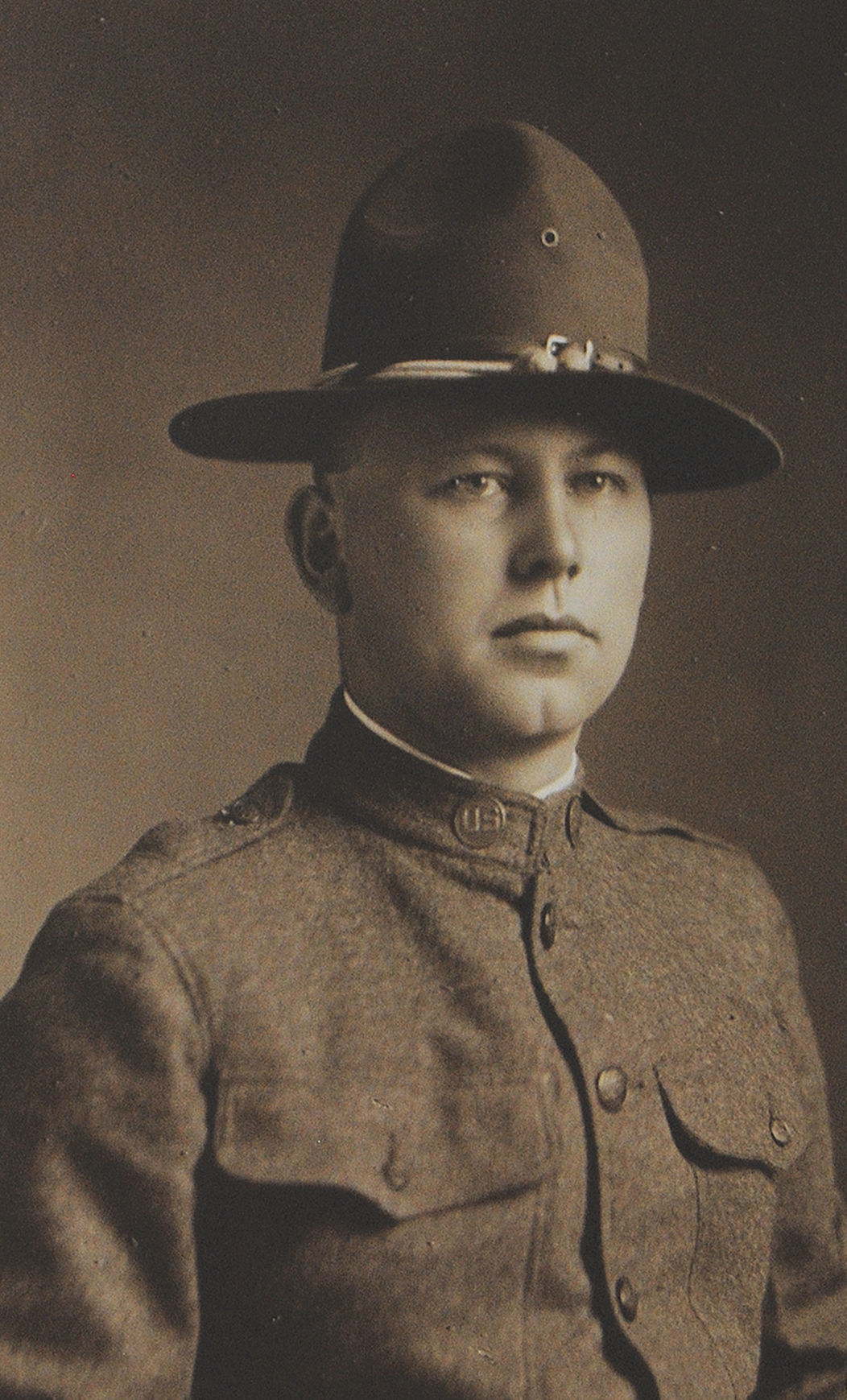 Beverly Stelse of Lake Mills looks at a photo of her grandmother, which her father kept in his pocket when he was in WWI.

Beverly Stelse points to a photo of her father in the basement of her Lake Mills home. August Strauss fought in WWI.

Photos of Beverly Stelse’ parents are seen in her basement.

August Strauss is seen at left with his friend Willy Draeger of Lake Mills.

It’s been over 100 years since the end of the War to end all wars. Stories of World War I are rarely heard today, but one Lake Mills daughter is making sure her father’s memory and his service to his country are never forgotten.

A trip down to the basement of Beverly (Strauss) Stelse home in Lake Mills is a trip down memory lane and reveals the memorial she has put together with everything she could dig up from her father’s military service during the Great War.

Stelse is a member of one of Lake Mills longest dairy farming families, the Strauss’, farming just north of Lake Mills off Highway 89, the farm has been in the family since 1881. Her father August G. Strauss was born May 28, 1893 to Christian and Marie (Dettmann) Strauss at the family farm on Rock Lake Road. He was the seventh of eight children in the family.

Stelse and her brother Donald Strauss say their father didn’t speak a lot about his time in France, but they do know he was shot by a sniper in his hip during the Aisne-Marne battle on Aug. 10, 1918.

He was awarded a Purple Heart. He arrived back in the United States on Jan. 17, 1919. He was honorably discharged from the Army Jan 28, 1919 and arrived back to Lake Mills by train using a cane. He was a hero, and was greeted by Lake Mills High School students, one of them would be his future wife Bernice Ida Pohlman.

The couple officially met when August purchased Bernice’s “box” at a social at the Plainview School, formerly next to the Newville Lutheran Church, they shared lunch together. At the time Bernice was the local school teacher. Their romance started from there and they were married on Dec. 7, 1922.

Stelse’s display contains photographs from his time before going overseas with other soldiers and his friend Willy Draeger also from Lake Mills, his coat, purple heart and post cards he gathered while in France. Stelse said she no longer has the leggings August wore as a solider.

“Those were long strips that they wrapped around their legs. When Mother and I made a large wool braided rug, in the late 1950s or early 60s, we needed more wool. Papa hesitantly agreed that we could cut up and use those leggings,” Stelse said. “My daughter Kriss has that rug at her home and she is proud that part of Papa’s uniform is in her home.”

Perhaps the most interesting thing in the collection is his file from the Jefferson County Veterans Office.

“When I started doing all this I went to the Jefferson County Veterans Service Office because I wanted his discharge date they were so happy I came. They took me downstairs in the courthouse plum full of files and they took papa’s file out and at that time, about three years ago, they were in the process of microfilming all these old records because they don’t have room for them anymore and they microfilmed his and gave me the file.”

If Stelse hadn’t come the file would have been destroyed.

“They kept everything that pertained to my dad,” she said of the files.

“This stuff is all 100 years old,” Stelse said while looking at the coat her father wore during the war. Out of the pocket she pulled the picture of her grandmother her father carried in his pocket during the war.

“I was always told he kept that there, so I put it in there,” she said.

Stelse said her father always wore bib overalls, stripped ones, while working on the farm.

“If he had to go to town for some parts he always had to put on clean ones,” she said.

After August and Bernice were married they bought the Strauss Farm from August’s parents and farmed until 1948 when they retired. August continued to be active on the farm until 1965 when he suffered a stroke.

Stelse describes her father as hard working, kind, generous, a good neighbor and easy going. He was soft spoken and jovial with a good sense of humor.

“He was respectful, I never heard him swear,” Stelse said.

August was active in the Lake Mills American Legion Post 67 and marched in the Memorial Day parades, was a member of the firing squad for funerals and sold Legion hamburgers.

“In those early years the hamburgers were 10 cents,” she said.

He also helped with Bingo during the annual festival and prior to the monthly Legion meeting would meet with Bill Engsberg, Duke Rogers and George Kasten to play cards.

After his stroke, August spent several months at the Veterans Hospital in Madison and eventually returned to the couple’s home on Ferry Drive. During the next 11 years he had several smaller strokes but kept an alert mind and memory. His friends from the Legion still came over to play cards.

“He was very busy, and farming was his life,” Stelse said.

“Good farmers have work every day,” said Phyllis Strauss, Donald’s wife. “That was his saying.”

“He would make apple cider every fall,” Donald mentioned. He also made his own beer.

It is plain to see the Great War veteran had a profound impact on the siblings and every member of the family. The family still laughs about things August would say and say when anyone was telling a story he would want to know, “Who’s kid is that?”

For Stelse the project to preserve her father’s memory in her basement began three years ago, but she’s been saving his memory for a lifetime.