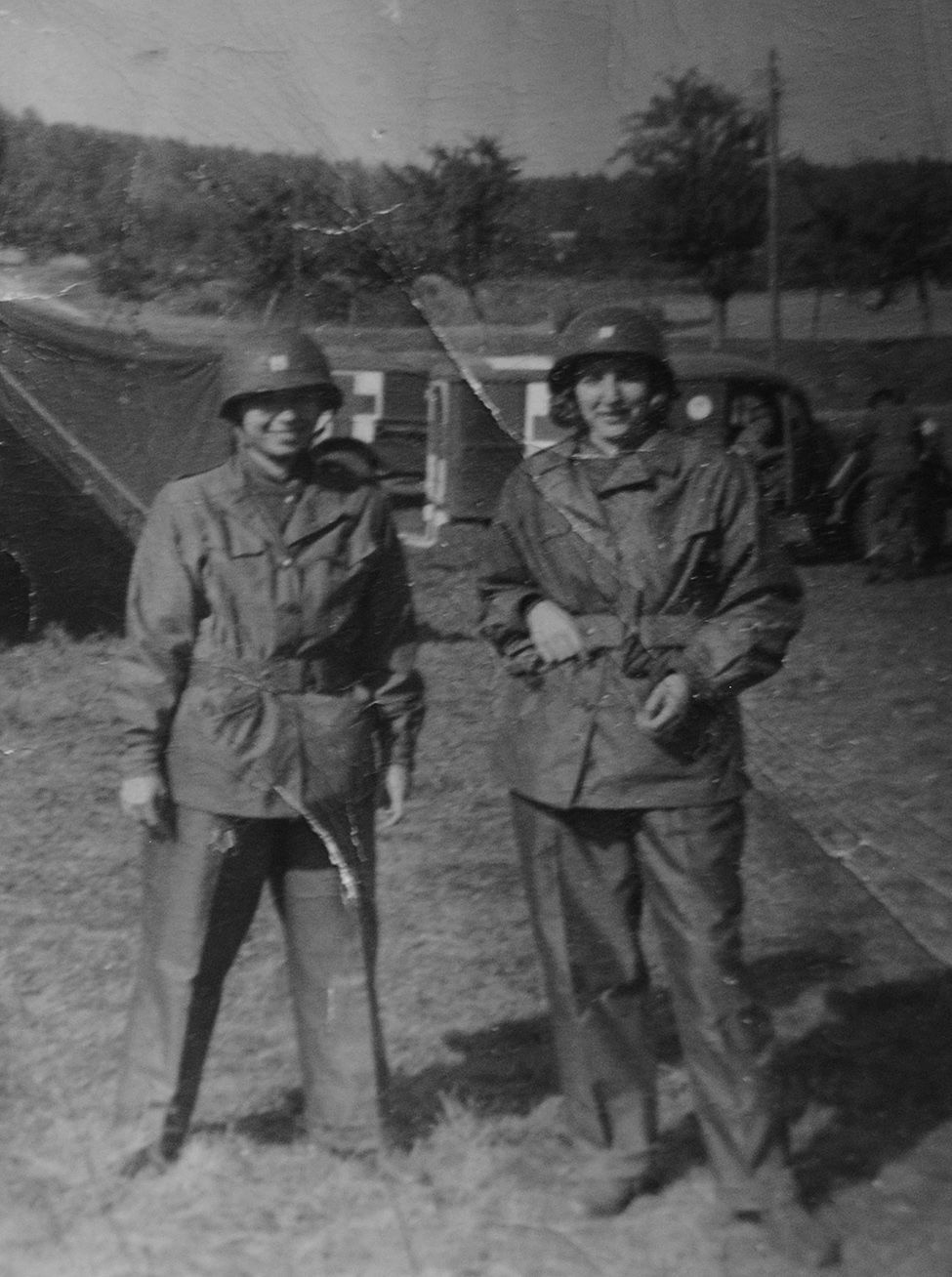 Mae (Engsberg) Bryant is seen at left while in Germany after World War II. Bryant was a physical therapist in the Army. 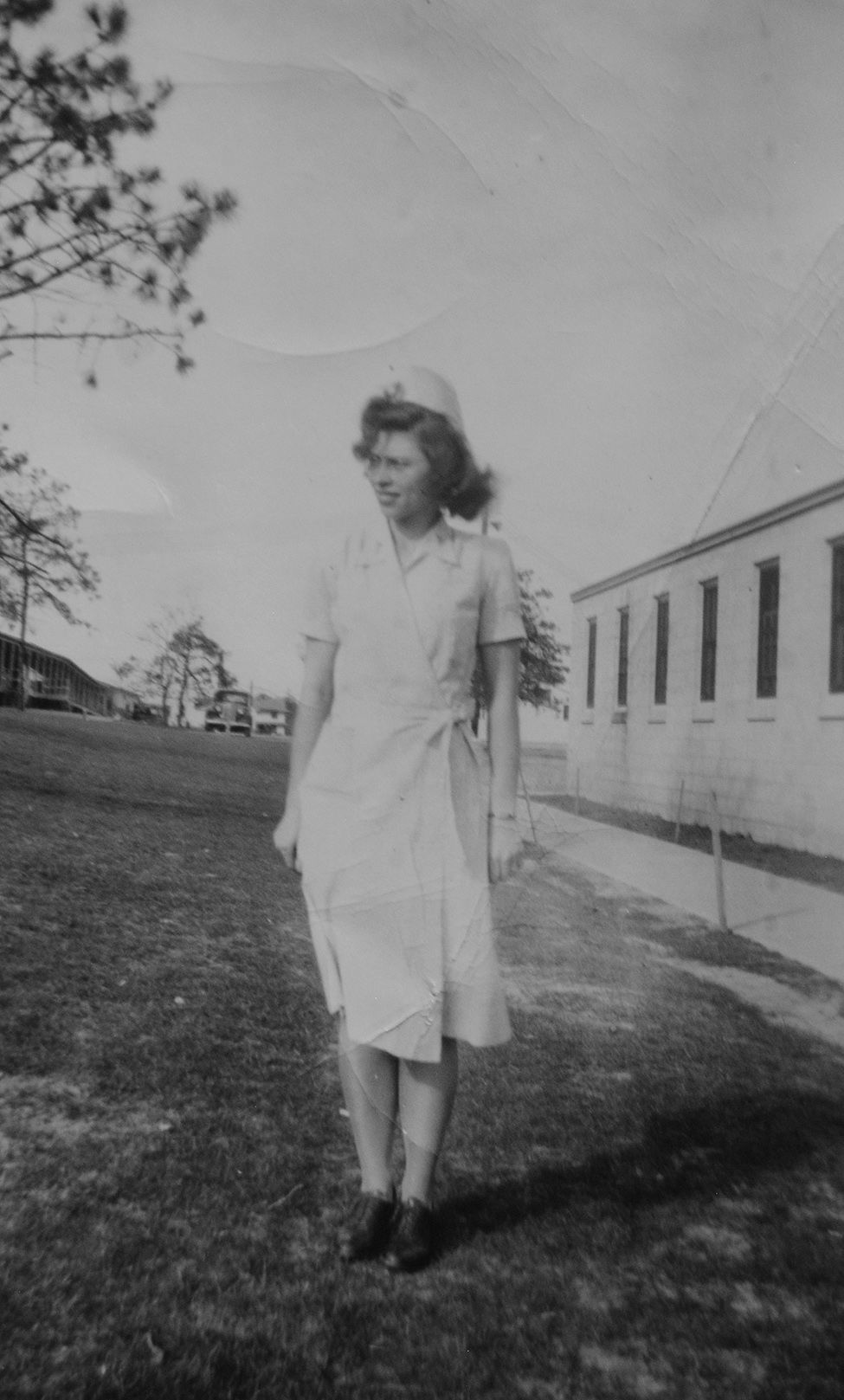 Mae (Engsberg) Bryant is seen in uniform as the wind blows her hair in San Antonio, Texas during training. 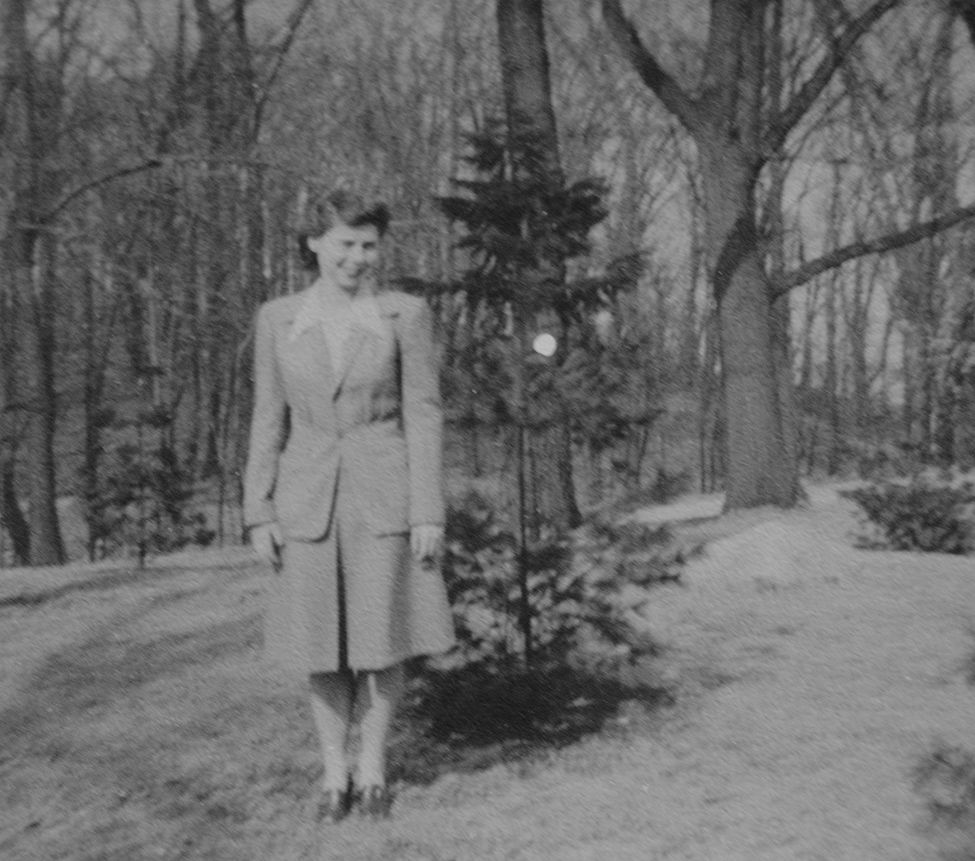 Mae (Engsberg) Bryant is seen during her time in Germany after World War II. 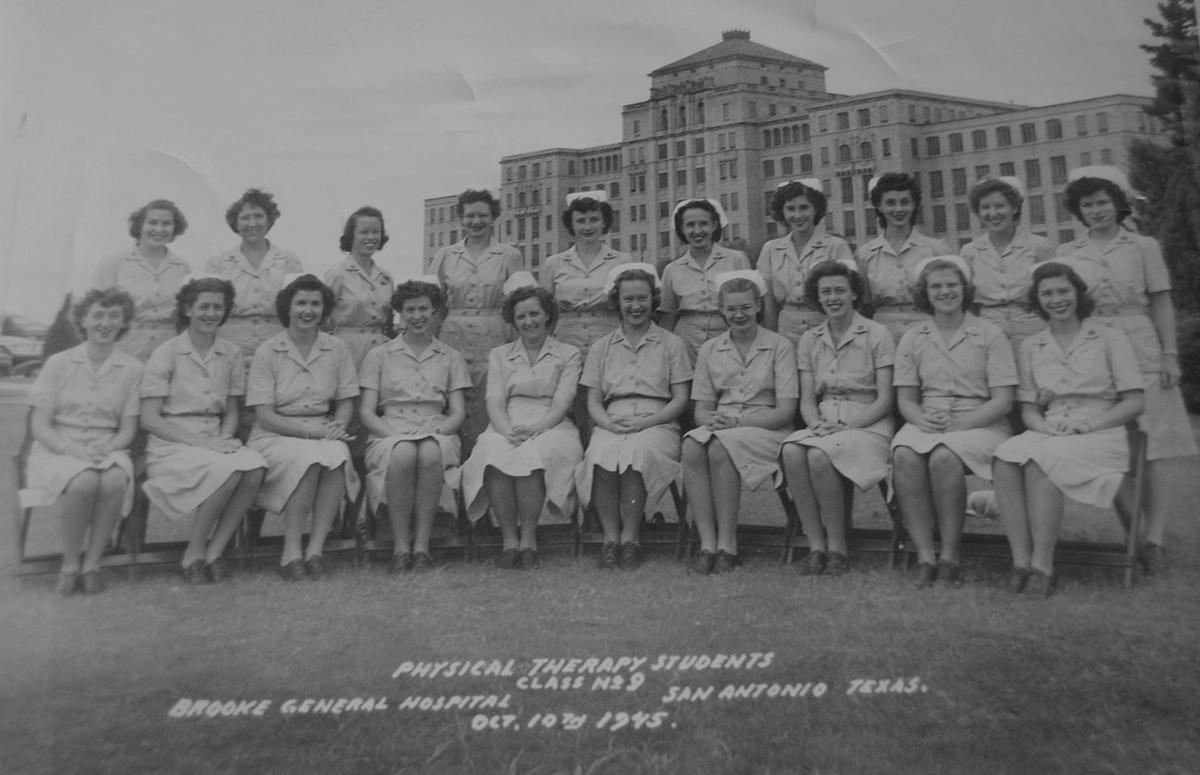 Mae (Engsberg) Bryant is seen seated at right in the front row at graduation from physical therapy school. 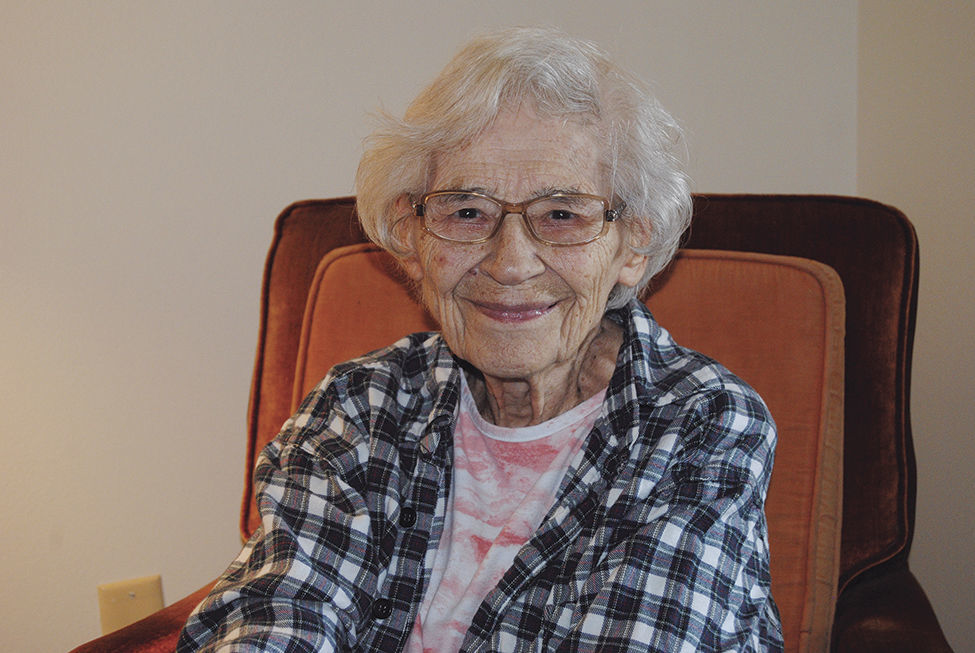 Mae (Engsberg) Bryant is seen at left while in Germany after World War II. Bryant was a physical therapist in the Army.

Mae (Engsberg) Bryant is seen in uniform as the wind blows her hair in San Antonio, Texas during training.

Mae (Engsberg) Bryant is seen during her time in Germany after World War II.

Mae (Engsberg) Bryant is seen seated at right in the front row at graduation from physical therapy school.

She looks wistfully at the black and white photos from more than 75 years ago. She has a twinkle in her eye that conveys private thoughts from days gone by, but she doesn’t share them.

“I’m trying to find one where I look decent,” Mae (Engsberg) Bryant, a World War II era veteran says with a smile.

As she rummages through old documents at her apartment at Trinity Pines Retirement Center in Lake Mills, she pulls out her high school diploma Lake Mills High School Class of 1941 and her degree from the University of Wisconsin-Madison. She finds several photos of her time in the service in her uniform and with her physical therapy graduating class. She even finds a newspaper clipping from a swim meet back in 1944 and a photo of her coming out of the pool.

The memories make up part of a lifetime for the 96-year-old. Bryant joined the Army in September 1944 after graduating from the University of Wisconsin-Madison with a degree in physical education.

“I didn’t like teaching,” she said of the job. “I heard the university was running a class in physical therapy by the Army. I thought that’s for me.”

She went to the training center in Des Moines, Iowa.

“You march and do calisthenics and all of those things were really easy for me because I was in really good shape.”

She stayed there six months and was transferred to Brook Army Hospital at Fort Sam Houston in Antonio, Texas.

“We went down there on a troop train, which was something different. There were six cars on the train and the dining car was ahead of us,” she said. “When lunch time came everybody paraded through and I was shocked at what happened when those men came through because the girls hooted and hollered just like men do.”

They arrived in the late evening and the next morning they started school. They were issued uniforms and had the afternoon off.

“A few of us thought that was great, we didn’t have to do anything. We got into our summer uniforms and we took off,” she said. “We decided we were going to go into San Antonio and see what was going on.”

One of the girls was from Arizona so she knew the area.

“We went to the Alamo and for supper she took us to a Mexican restaurant and exposed us to refried beans and enchiladas.”

They went back to their building and found out they were AWOL, Bryant said with a laugh.

“Fortunately, they gave us passes early before we left so we knew we weren’t AWOL. We were supposed to go back to our dorm and put our stuff away and look around the campus.”

She said there were five women including her and they weren’t used to being around so many officers they had to salute to.

“We were going down the street saluting every officer we saw,” she said. “They weren’t expecting these private girls to be saluting.”

There weren’t many women in the service at the time.

They had chores and classes at the hospital.

“We got to the mess hall and everyone else was gone,” she said with a giggle. “We had fried potatoes, sauerkraut and wieners. By the time we got to supper almost everything was gone.”

School taught the aspiring physical therapists’ massage and exercise and how to use all of the equipment they would use.

Bryant’s team then swam in a tournament with other posts. They won the tournament.

One of the first memorable things that happened while Bryant was at the post was President Franklin D. Roosevelt died.

“We had a day off to march in a parade and then the Germans were defeated, and we marched in that parade and then when the war was over it was time to graduate from that part of the schooling.”

Bryant went on to do an internship at Billings Field Hospital in Indianapolis for three months.

In January 1946 she was commissioned for Second Lieutenant and she reported to Camp Upton Patchogue, New York.

“We were treating guys who were there for a month or two before they were sent home to see if they could manage.”

After a year she was assigned to Tilton General Hospital at Fort Dix, New Jersey.

“By that time the war was over and the people in Germany were being transferred back to the States. When I was commissioned they asked me if I would serve overseas and they asked me where and I said Germany.”

Bryant was interested in going to Germany because of her family’s German descent. She also took German in high school.

“My folks spoke German too, more when we were little,” she said. “So, they could keep secrets.”

Bryant was only supposed to be in Germany for two years, but when the two years were up the Russians has closed down Berlin.

“The Army said all our planes are taking coal and supplies into Berlin. So, we stayed.”

Another year went by and tensions were raised in Korea.

She was stationed in Germany about four years.

“I had vacations. I could travel anywhere in Europe that I wanted. I went to Norway, Denmark and Sweden. I went to Casablanca and Tangiers. We would go for a weekend in Holland and once to Paris.”

The first vacation she took was to Switzerland.

“We were still wearing uniforms then,” she said. “It was exciting, and it was fun, but it wasn’t like being in a war. I’m considered a World War II Veteran, but it was only because I happened to be in.”

She said her job was exciting and interesting.

“My patients were just like any hospital patient. They had broken bones and stiff backs, broken arms and legs and back pains and other kinds of pains.”

She was located in an Air Force Hospital.

“It was really plush.”

One year she took care of three polio patients.

Bryant did pool exercises for the polio cases.

While she was in Germany she saw firsthand some of the devastation from the war.

“We went through checkpoints before we got to the hospital,” she said. “Some of the streets were still closed. I can remember one of the first things I saw was a bathrobe up on the third floor of a building hanging out of a window and hanging out of the building was a bathtub.”

She says she only had one patient during her time in the Army she felt like she had really done something for.

“This lady had come to the hospital to have a baby and her kidneys stopped working correctly.”

Doctors wanted her to have a heat treatment every four hours to see if she could get the kidneys going.

“That’s pretty hard work, but she lived, so it was worth getting up at midnight and again at 4 a.m. to administer those treatments.”

“I never saw the end,” she said. “They would get sent home.”

Bryant came home from Germany in 1951 and was assigned to Percy Jones General Hospital in Michigan.

“I had gotten married and they said, ‘Sorry we don’t need you anymore.’”

Her father was in the service in World War I, Bryant said.

“He offered to join during the Second World War, but he wanted to be a major and they didn’t need him for that. He was in the Signal Core.”

Bryant said her father didn’t talk much about his experiences during the war.

After the Army Bryant came home to Lake Mills, eventually taking a job as a physical therapist in Davenport, Iowa.

She came back to the area after finding a job in Waterloo.

“I wasn’t really happy in Davenport, because the working conditions were not the best.”

She worked in Waterloo 10 years and helped to take care of her father.

Her and her son Roger spent a lot of time in town with family.

“I thought one of the things my son needed was a male influence,” she said, and she was wasn’t interested in dating after her divorce.

“I wasn’t interested in getting married again. My son and I were a family. We didn’t need anybody else.”

Eventually she worked in Fort Atkinson and then at Willowbrook in Lake Mills. In the 1980s she retired, but continued to fill in.

“That was the year I fell apart,” she said of her health. She had gallbladder surgery, diverticulitis surgery and cancer surgery.”

She said learning to work with a bunch of women was a good experience.

Bryant was an active volunteer in her retirement years. She volunteered for the Wisconsin State Historical Society, Nature Conservancy and the VA Hospital. When she turned 90 she decided she would only work for the VA Hospital. She’s been volunteering there 20 years.

“I felt like I paid my dues. I was in the Army nine years,” she said. “It went very fast, but of course time goes very fast anyway.”