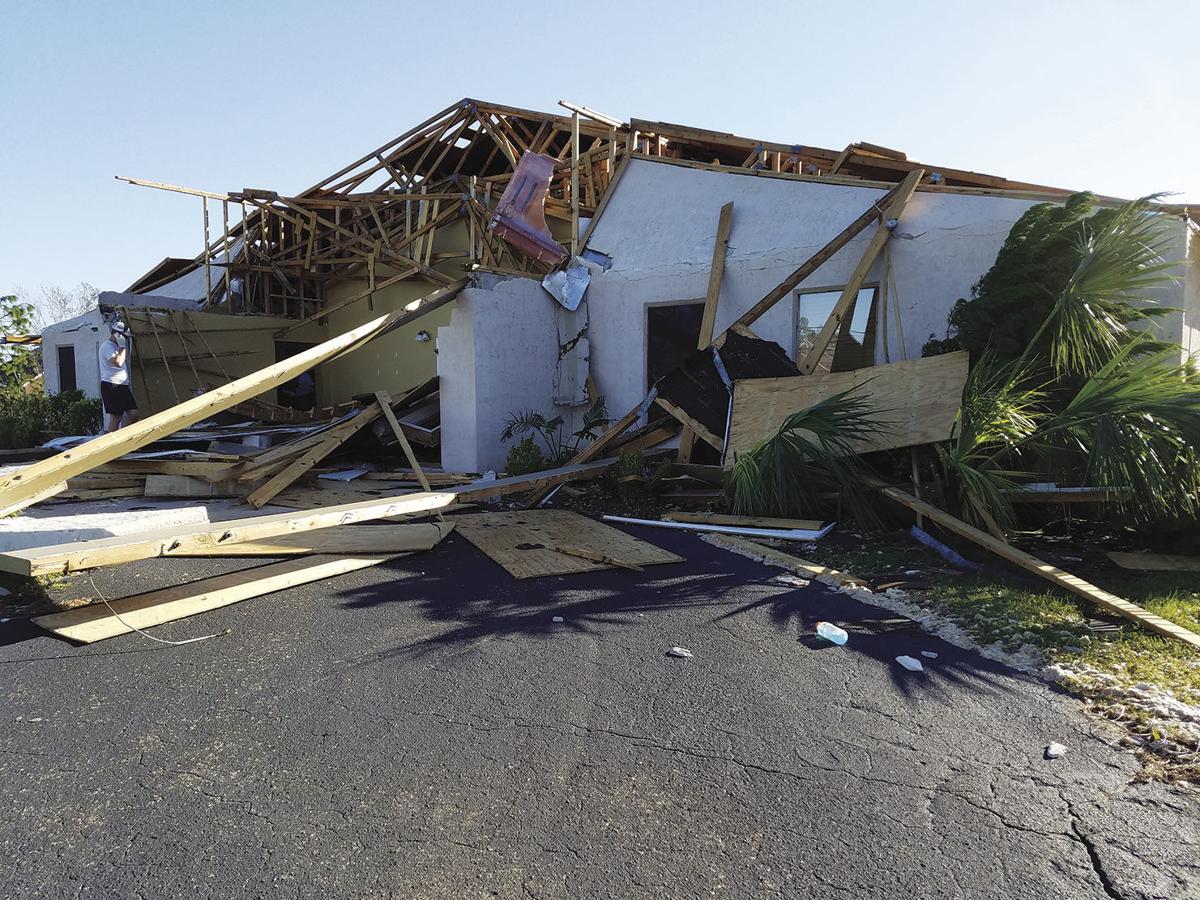 Hurricane Micheal ripped apart parts of Panama City, Fla., last fall. Jeff Draeger of Lake Mills went to the disaster zone to help with the clean up. Above, the Wisconsin Ev. Lutheran Synod church is seen. 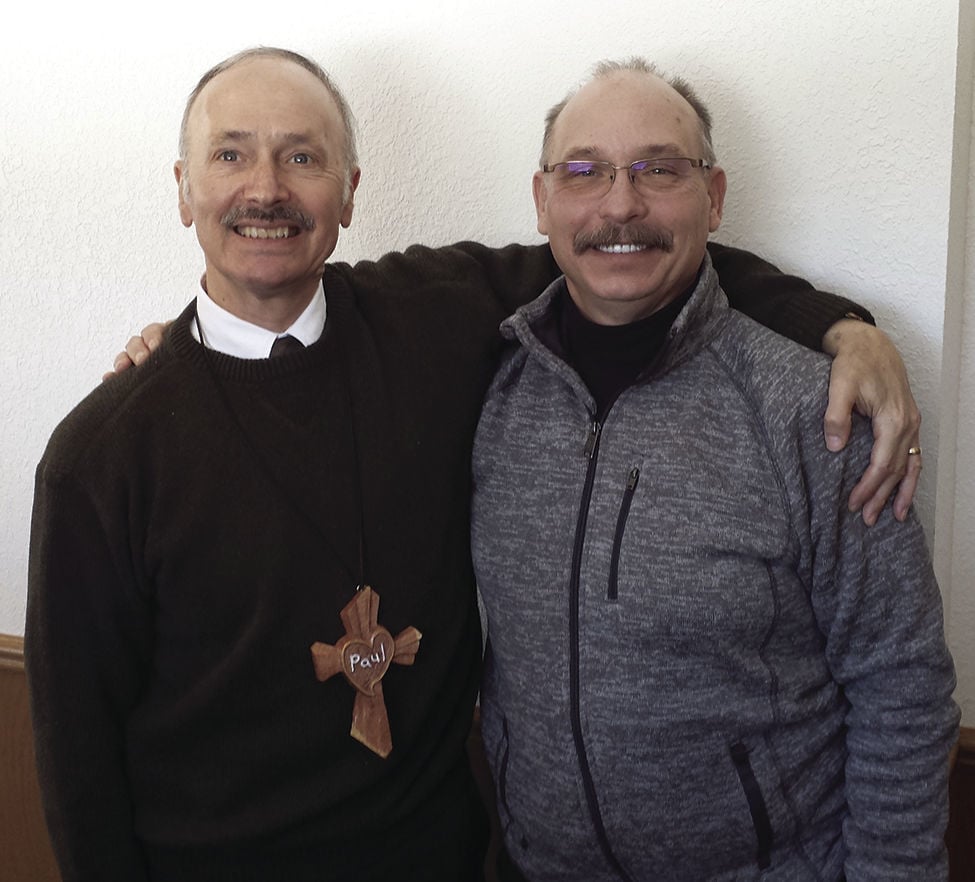 Jeff Draeger is seen at left with Pastor Paul Scharrer. He encouraged Draeger to go on a mission trip to Panama City, Fla. to help in the recovery efforts after Hurricane Micheal last fall. Schaar wears a cross made from wood in the disaster zone. 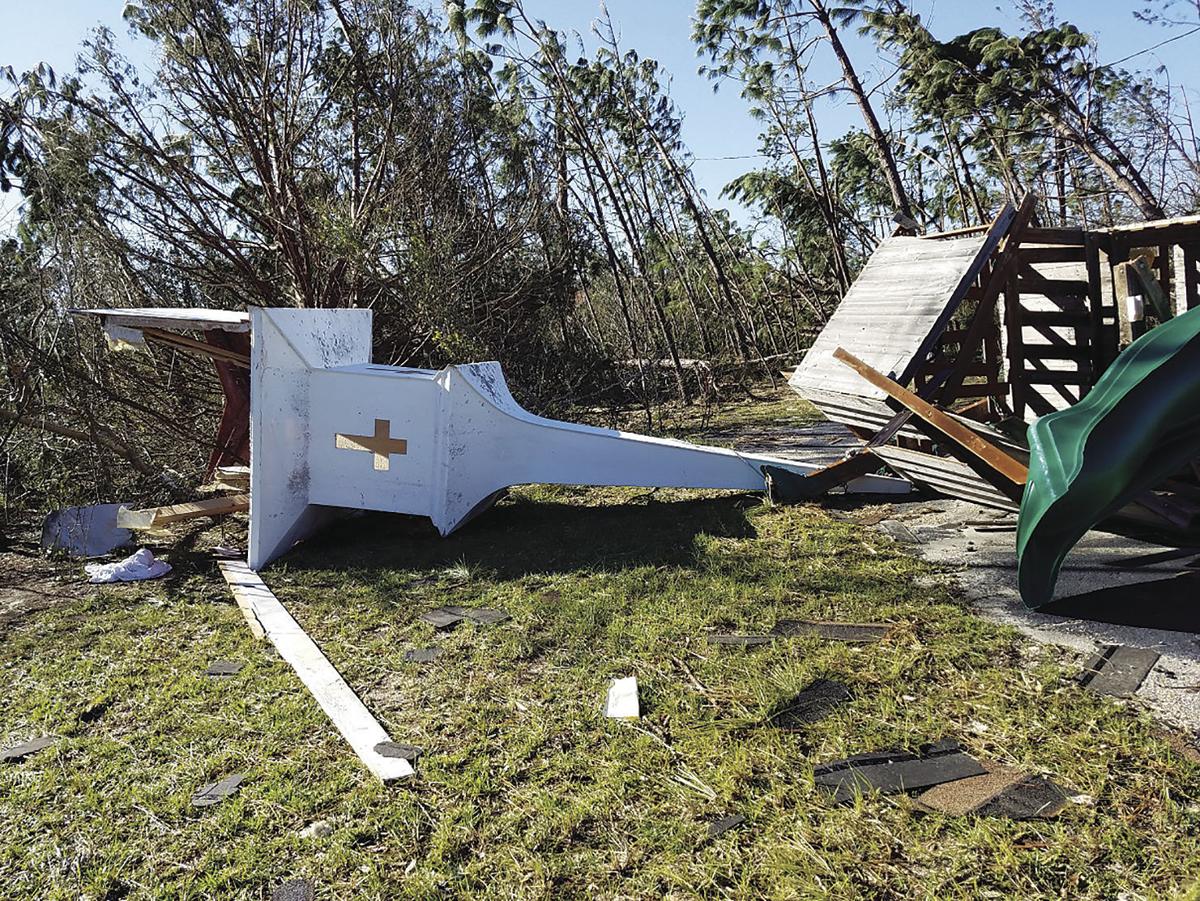 The church steeple from the WELS church in Panama City, Fla. is seen after Hurricane Micheal. The steeple will be placed back on the rebuilt church. 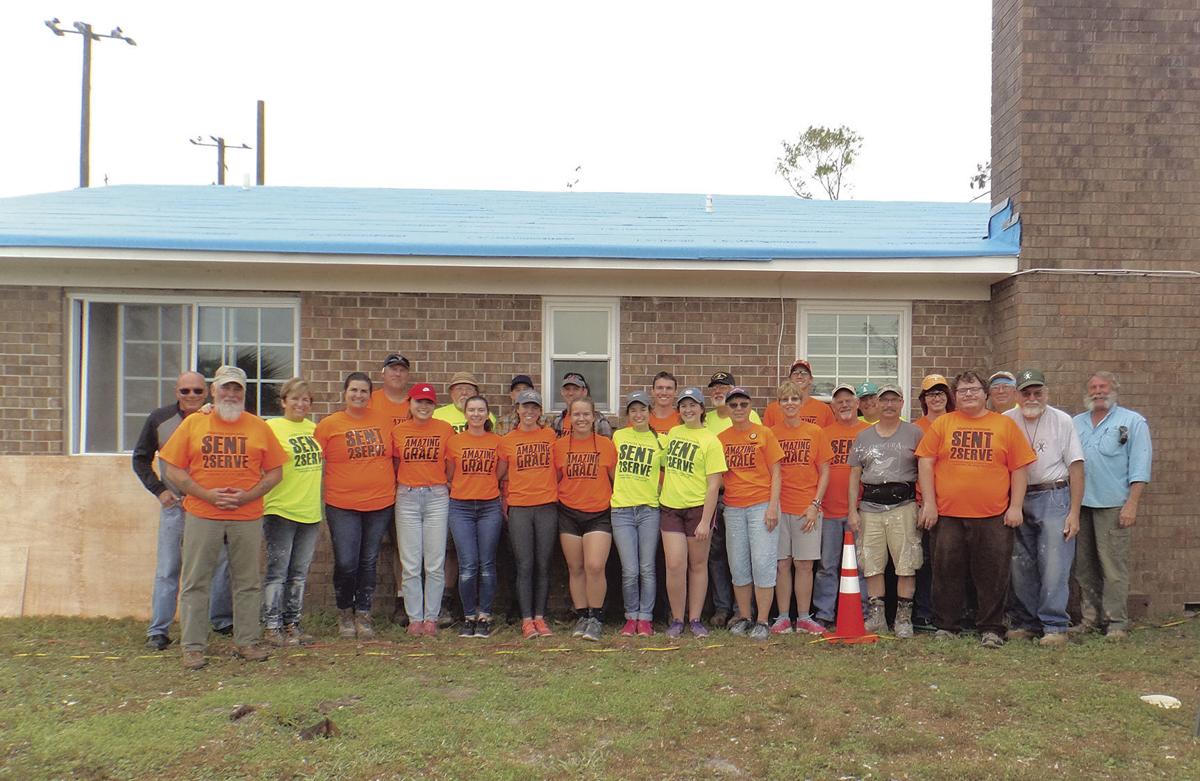 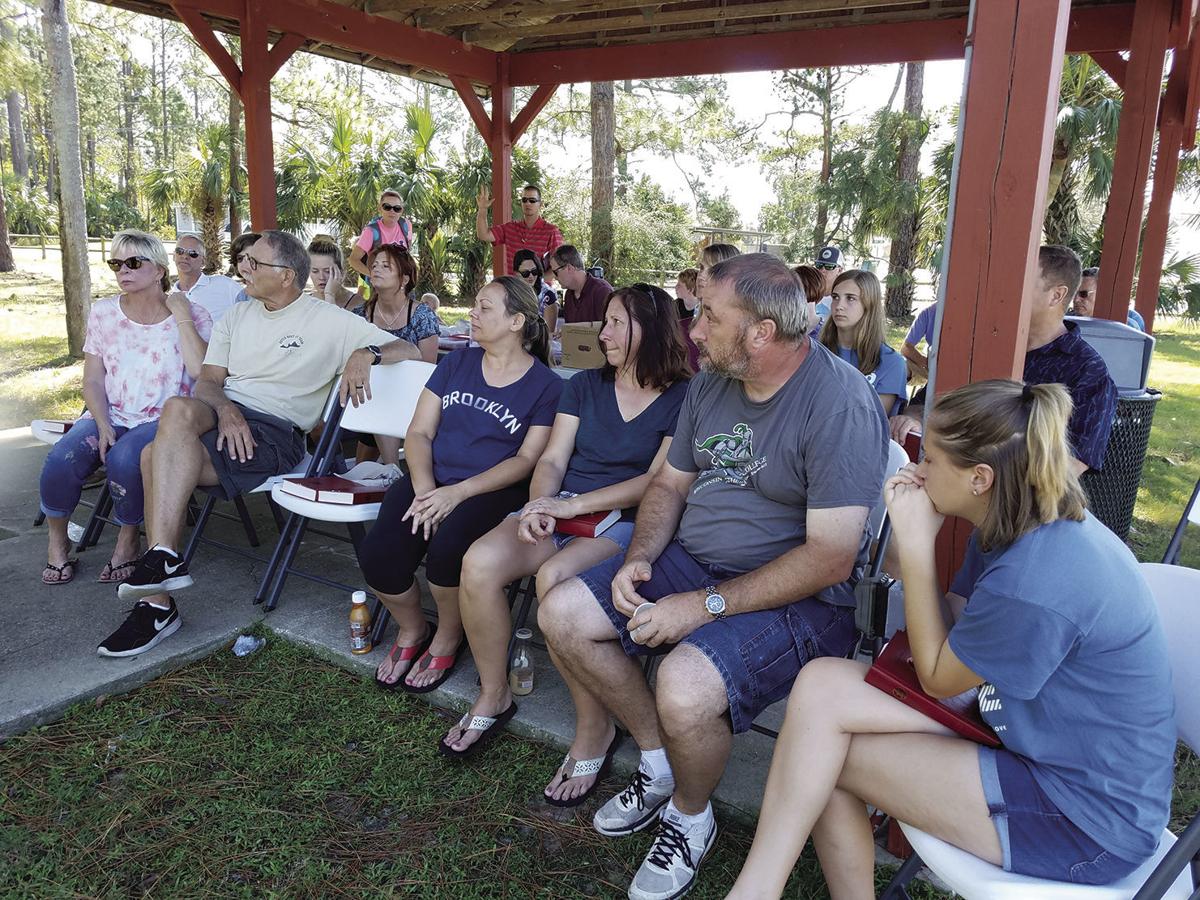 Church services occured outside in the aftermath of the storm.

Hurricane Micheal ripped apart parts of Panama City, Fla., last fall. Jeff Draeger of Lake Mills went to the disaster zone to help with the clean up. Above, the Wisconsin Ev. Lutheran Synod church is seen.

Jeff Draeger is seen at left with Pastor Paul Scharrer. He encouraged Draeger to go on a mission trip to Panama City, Fla. to help in the recovery efforts after Hurricane Micheal last fall. Schaar wears a cross made from wood in the disaster zone.

The church steeple from the WELS church in Panama City, Fla. is seen after Hurricane Micheal. The steeple will be placed back on the rebuilt church.

Church services occured outside in the aftermath of the storm.

Oct. 10, 2018 changed the lives of the people living in Panama City, Fla., who experienced one of the deadliest hurricanes of 2018, and changed the life of one Lake Mills man who felt compelled to help.

Jeff Draeger, a Lake Mills native and member of Immanuel Lutheran Church in Marshall on County Road BB, says he doesn’t know what drew him to help after Hurricane Michael hit Florida, he just felt like he needed to go.

Draeger was sent to one of the hardest hit areas by the Wisconsin Evangelical Lutheran Synod in November 2018. The organization paid for his ticket and provided him with food and a place to stay, while he provided some much-needed labor to help get a community back on its feet.

“It was known as a war zone,” Draeger said. “It was totally devastated. There wasn’t a home that wasn’t touched.”

Homes were without roofs and completely soaked. It rained for weeks after the hurricane. Blue tarps are still a constant decoration in the Florida panhandle.

“Those people never got a break.”

Hurricane Michael is the third most intense Atlantic hurricane to make landfall in the United States in terms of pressure. The winds in the storm were 155 miles per hour and damage estimates reached about $25 billion. At least 72 people died in the category four storm that lasted 10 days, 57 in the Unites States and 15 in Central America.

“We were there to help the WELS church system rebuild their church and the parsonage,” Draeger said. “After that we started to help people in the congregation. Many of these people had no place to go.”

“A lot of them will never return to their homes. There is nothing to return to.”

Six months later people are still living in tents and looting was particularly bad in the area while he was there Draeger said.

“People put signs up that said, ‘you loot, we shoot.’”

Draeger was in charge of picking up and dropping off students who came to help. He says the college students were great to work with.

Pastor Paul Scharrer brought the project to Draeger’s attention and encouraged him to go.

They stayed in a children’s camp and the conditions were difficult, there was not very reliable cell phone service, running water or toilets.

Debris on the side of the road was the norm, Draeger said.

Mold was a huge issue for workers to worry about it.

“It was going to take months for them to get rid of this stuff. They had to create new dump sites for this stuff. There wasn’t a tree that wasn’t cracked.”

In the aftermath of the hurricane people had trouble getting what they needed.

“There were lines outside pharmacies and it was the same with food.”

People are still collecting food boxes from churches and other charities.

Getting supplies to make the necessary repairs to homes has been an ongoing issue. FEMA says nearly $140 million has been approved, with the majority of the money going to housing, but the money won’t be enough if the federal government doesn’t extend the disaster declaration.

“The gentleman in charge of our program had connection so he could get supplies. There were no stores with supplies left.”

The turnout of volunteers from Wisconsin was huge he said.

“I was never so proud to be from the state of Wisconsin. There were more groups from Wisconsin there than any other state.”

Missionaries quickly realized they were bringing hope to people.

“We quickly realized we were a bright shining light to people.”

They held church services outdoors while they were rebuilding the church and worked with Pastor Jerry Enderle and his wife Jan, who is known as ‘Pastor Disaster’ because he travels to different disaster zones to help.

“His devotions helped to get us through.”

A lot of the community was lost physically and spiritually.

“We talked to so many people who couldn’t get back to their homes, because there were so many power lines down.

Draeger, a retired electrical engineer, is well qualified for this type of disaster.

“Whatever needed to be done is what I would do,” he said. “There was a lot of people who came down who didn’t know what to do and we taught them things and it was really rewarding.”

In the aftermath of the storm the church steeple was found in a swampy area, only missing the top cross, which a woman found in a nearby swamp.

“They are going to put the steeple back on the church upon finishing it,” he said. “It’s divine intervention. You see that when you are down there. It hits you like a rock.”

“We were seeing people come to the Lord. It was wild to see.”

Draeger is willing to do presentations about his mission work in Florida to those who are interested.

It’s been about six months since Hurricane Michael hit and Draeger plans to head back to Panama City in the next three weeks to continue what he started and he’s hoping other people in the area might join him.

Those interested in more information about volunteering to help those affected by disaster relief can contact WELS Christian Aid and Relief. In Wisconsin persons can contact Kim Mueller at 262-224-3003 or Draeger at 920-253-5980.

“I feel like I have to finish what we started. It’s going to take a long time and we know some of it will never be finished.”

The people working together in these disaster zones never say goodbye.

“We say until we meet again, because we will meet someplace again eventually,” he said pointing to the sky.