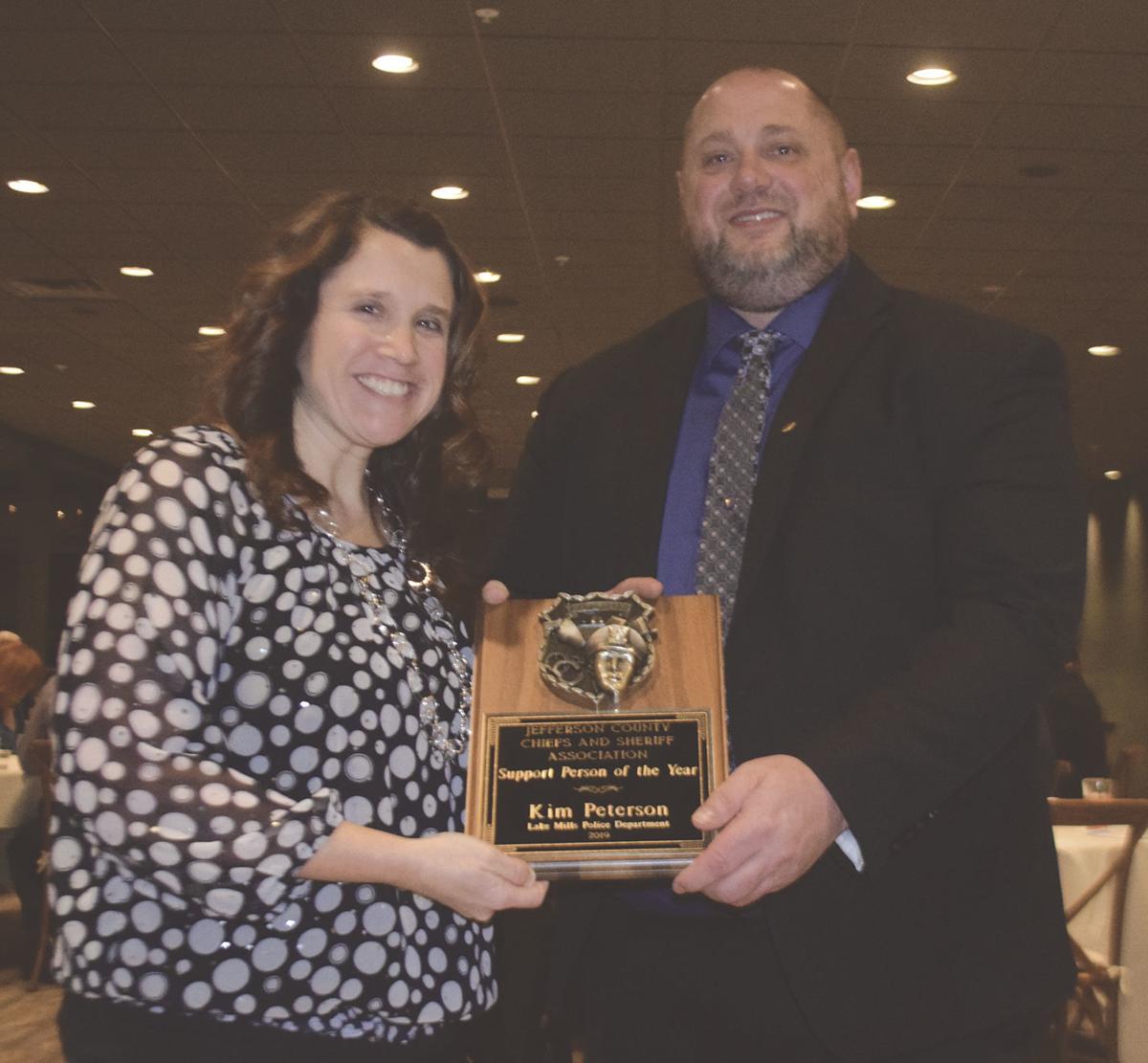 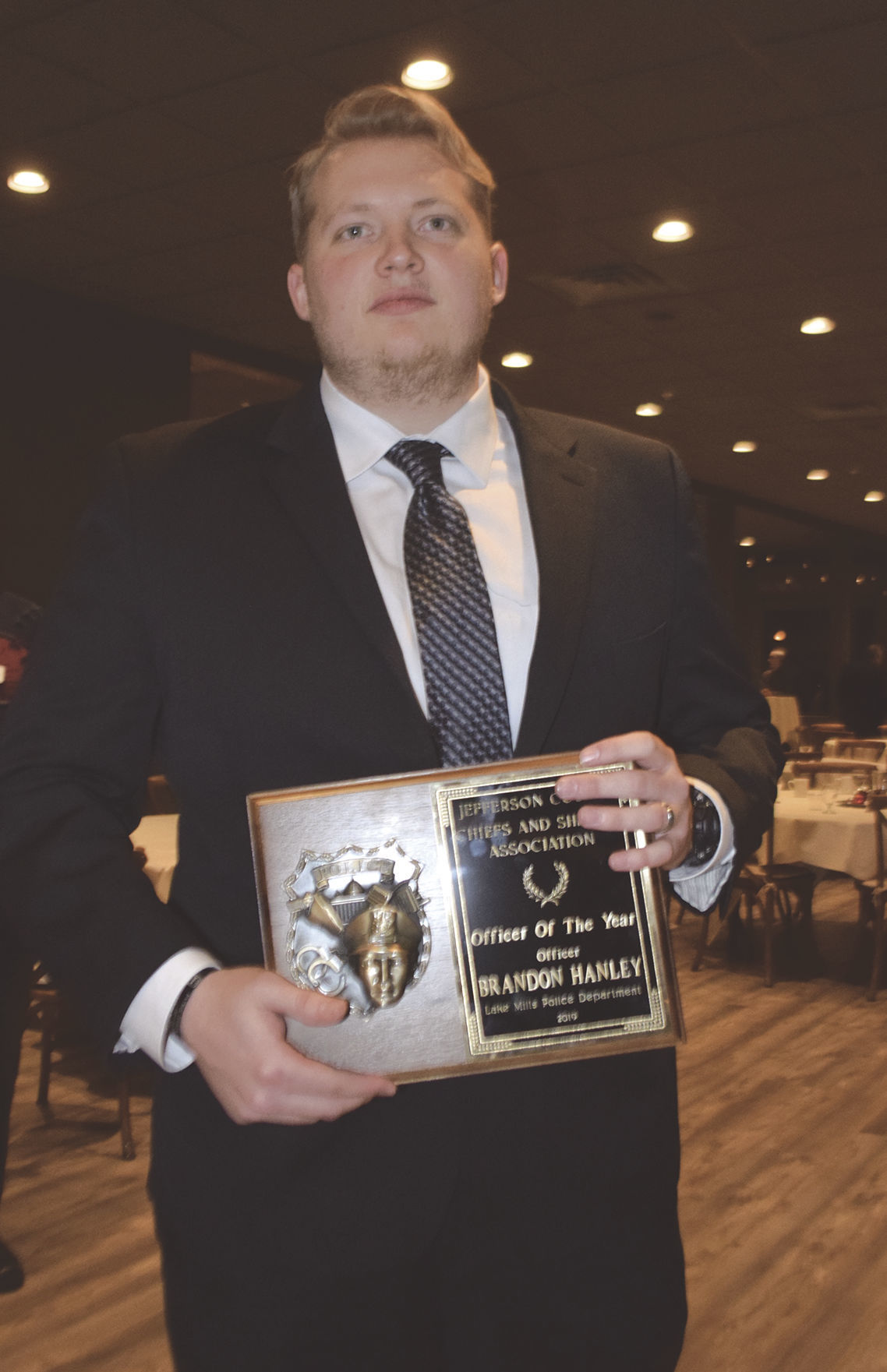 Brandon Hanley of the Lake Mills Police Department received the honor of Law Enforcement Officer of the Year Thursday at an annual awards ceremony for 2019 conducted by the Jefferson County Chiefs and Sheriff Association.

Brandon Hanley of the Lake Mills Police Department received the honor of Law Enforcement Officer of the Year Thursday at an annual awards ceremony for 2019 conducted by the Jefferson County Chiefs and Sheriff Association.

The Jefferson County Chiefs and Sheriff Association awarded those who went above and beyond their calls of duty and citizenship in 2019 to serve the cause of public safety.

Among several other people honored at the event was Support Person of the Year, Kim Peterson, a dispatcher-secretary at the Lake Mills Police Department. She was honored with a plaque and speech by Lake Mills Police Chief Mick Selck.

“Kim has gone above and beyond in her professionalism, willingness to help, friendly demeanor and customer service,” Selck said. “She stays at her desk and works tirelessly through her entire shift. If she has officers out on a complaint or traffic stop at the end of her shift, she does not leave until she knows they are safe and they have everything they need.”

Selck said Peterson’s competency and ability to multi-task has been proven repeatedly.

“One night I was able to witness it first hand when I was in dispatch,” Selck said. “Kim took a call for a deceased person. As officers were arriving on scene, she received a call of a car crash. Within another minute, she received another call from a woman who wanted to report a sexual assault. Kim was able to juggle all three calls without becoming flustered, and assured them all that help was on the way.”

In 2019, the Lake Mills Police Department had two major projects that were new to the department and Peterson jumped in to help, Selck said.

“First, the Lake Mills Police Department moved forward into a donation-driven K9 Program,” Selck said. “The community rallied behind the cause and donations came flooding in. Kim’s job was to manage the funds, and create spreadsheets to track cash donations coming in and going out. Spreadsheets and formulas were all input into excel documents for an easy to use, at-a-glance workbook for me. In all, over $54,000 worth of donations came in and were spent under Kim’s watchful eye.”

This was, according to Selck, only the second biggest project worked on by Peterson. In the early part of 2019, the city manager asked department heads to look at their budgets from a function standpoint, instead of the traditional line item. Peterson created complex Excel spreadsheets and began inputting purchase orders going back to the beginning of the year.

“Trust me, it was complicated,” Selck said. “Kim also was my right hand person in setting up a team-building exercise during the summer. She and I worked as a team and her input and assistance helped make it a very successful event.”

Selck acknowledged that all of the previously mentioned attributes were work-related, but one of the most meaningful events produced by Peterson in 2019 occurred in a personal capacity.

“On May 24, Jordan Grossman, age 10, of Lake Mills, died from injuries sustained in a car crash,” Peterson said. “Kim, and a handful of neighbors and other community members, banded together to do a fundraiser for the family. In 10 days, they raised over $20,000. Kim was in charge of the silent auction. She ended up getting approximately 150 gift baskets valued at about $12,000.”

Selck said 2019 has been a busy year for his department and Peterson’s efforts have made things easier.

“Our calls for service are up, which means more reports, warnings and citations are being processed than previous years,” Selck said. “Even with the accelerated workload and the additional tasks, Kim’s fun-loving personality shines through. She truly is an example of a great employee, and I am proud that she works for me, and I am proud to call her a friend.”