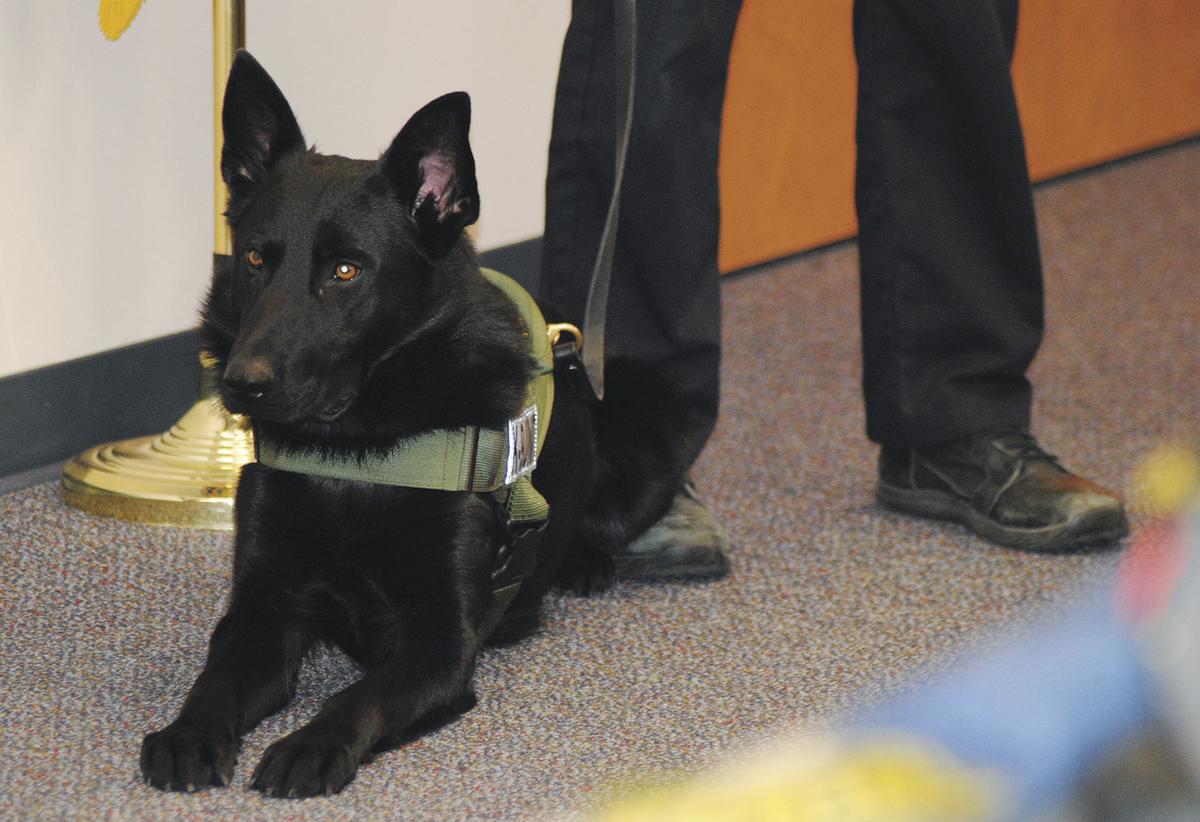 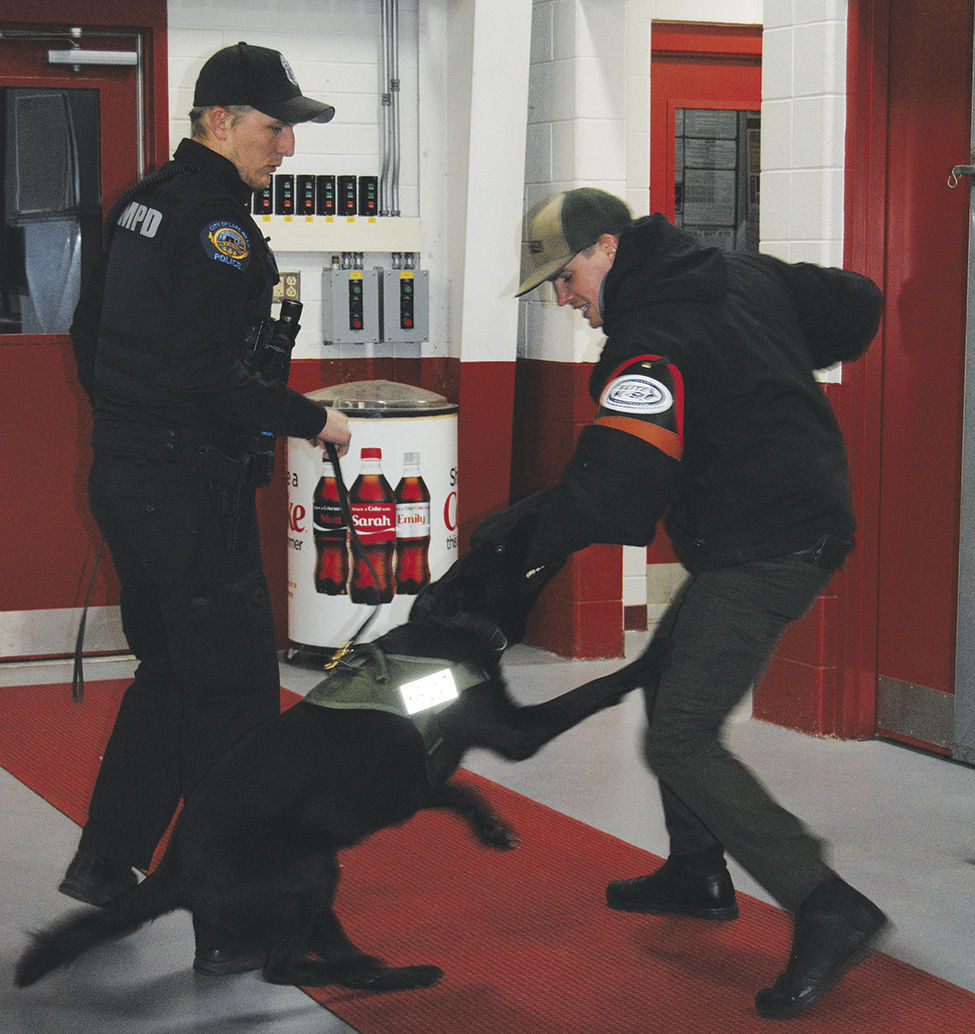 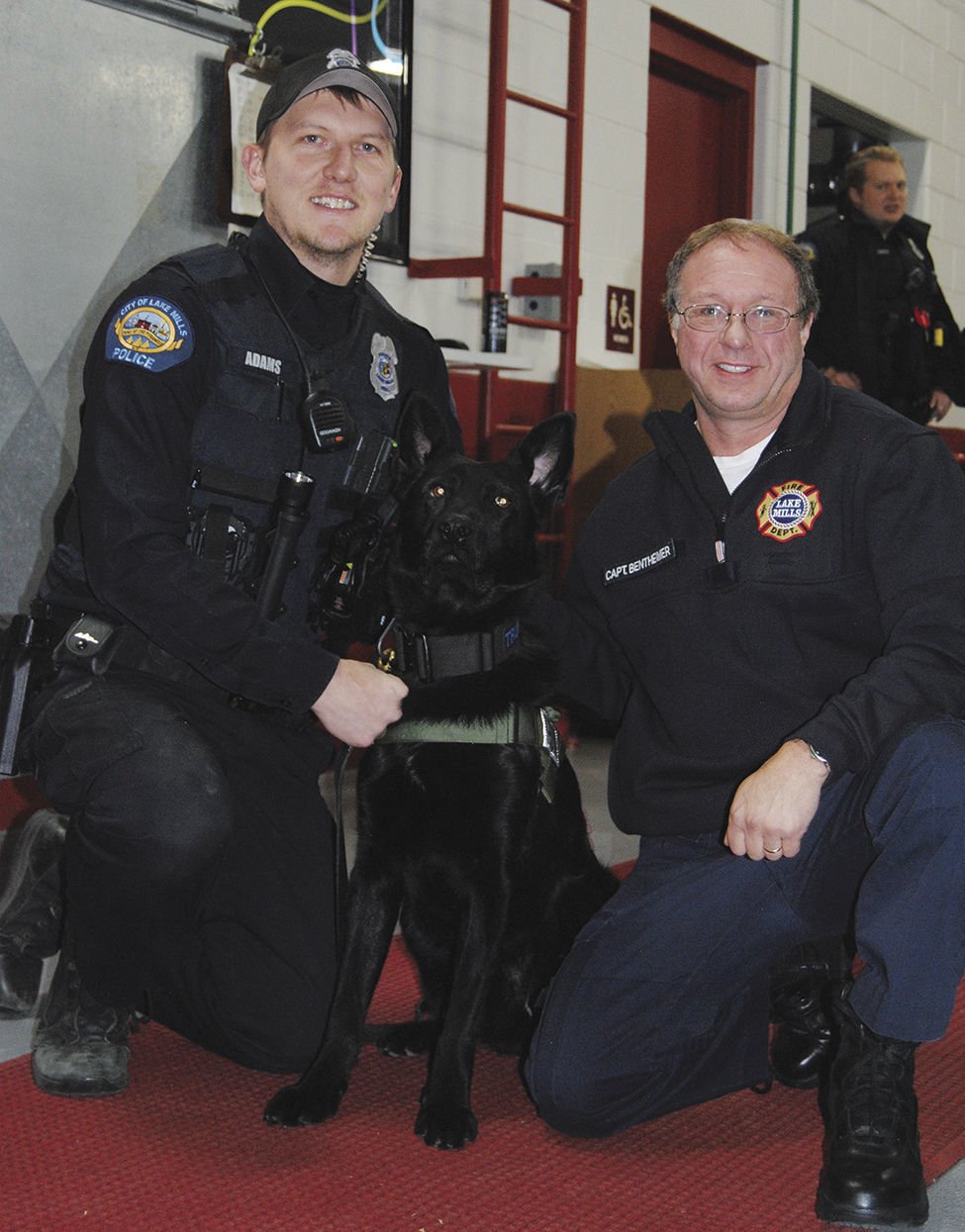 He’s furry, barks and has been trained to protect in honor of a Lake Mills hero. Members of the Lake Mills Fire Department had the chance Dec. 3 to meet the K9 named after their friend and colleague Capt. Chris Truman.

Firefighters were warned, because they may be in a situation where they are working with the K9, to do everything in their power not to be viewed as a threat by the dog when he’s working.

“If he would come lose for whatever reason it’s very important that you stay still,” Lt. Brandon Cedarwall told members of the fire department. “Let him come to you. Don’t reach out to invite him in.”

Officer TJ Adams, Truman’s handler, reminded firefighters not to go up to Truman when he is in the car.

“He’s trained to bark and go crazy,” he said. “If you get bit, it would really hurt our program and that would make him look bad. He is trained to bite. I know he is friendly and calm now but he bites.”

Adams said Truman was the smallest dog in his class, but he was easily the most ferocious.

“He’s people friendly, but when it’s time to turn that switch on he knows how to turn the switch.”

When the dog hears the door of the squad car pop he knows he’s working, police said.

“Whether its narcotics or apprehension,” Cedarwall said he is trained to work.

“We train him that he can win in any circumstance. We want him to feel like he can win,” Adams said.

They are training with the dog every day doing mock traffic stops and searches at the police department.

Firefighters asked what happens if Officer Adams is in trouble and the dog is in the car.

“I have a button I can hit and the door pops,” Adams said.

Overall Adams said Truman is as close to a normal dog as a K9 officer can be.

Truman will do everything in his power to protect his handler. If Officer Adams goes down fire and EMS may have a difficult time getting to him. In that situation another officer who has trained with the dog will remove him and get him back to the car if they can.

“We want to do everything we possibly can to not have to destroy him,” Cedarwall said. “But TJ is our priority as well.”

Other area K9’s could also be of assistance if a situation like that were to arise.

“When our work and your work overlap we want you to be as safe as possible,” said Police Chief Mick Selck. “If you treat him like a house dog you might come away without a finger…If this dog hurts one of you guys this is going to affect the program.”

The K9 holds a personal significance to the chief and the firefighters who were good friends with Capt. Truman.

“We named him Truman and that means a lot to me and I do not want this program to fail,” Selck said. “We want you guys to be safe and honor his memory.”

In total the dog with the training and equipment has cost about $54,000. The funds were raised by the community and businesses. Truman is trained in drug detection, search and rescue and officer protection.

The message of the night was safety.

“You always need to ask and see what TJ is advising you,” Selck said. “You can’t think of this like a normal dog. We spent the $54,000 we raised, and we are still maybe a touch short. It’s a big commitment and we want it to work.”