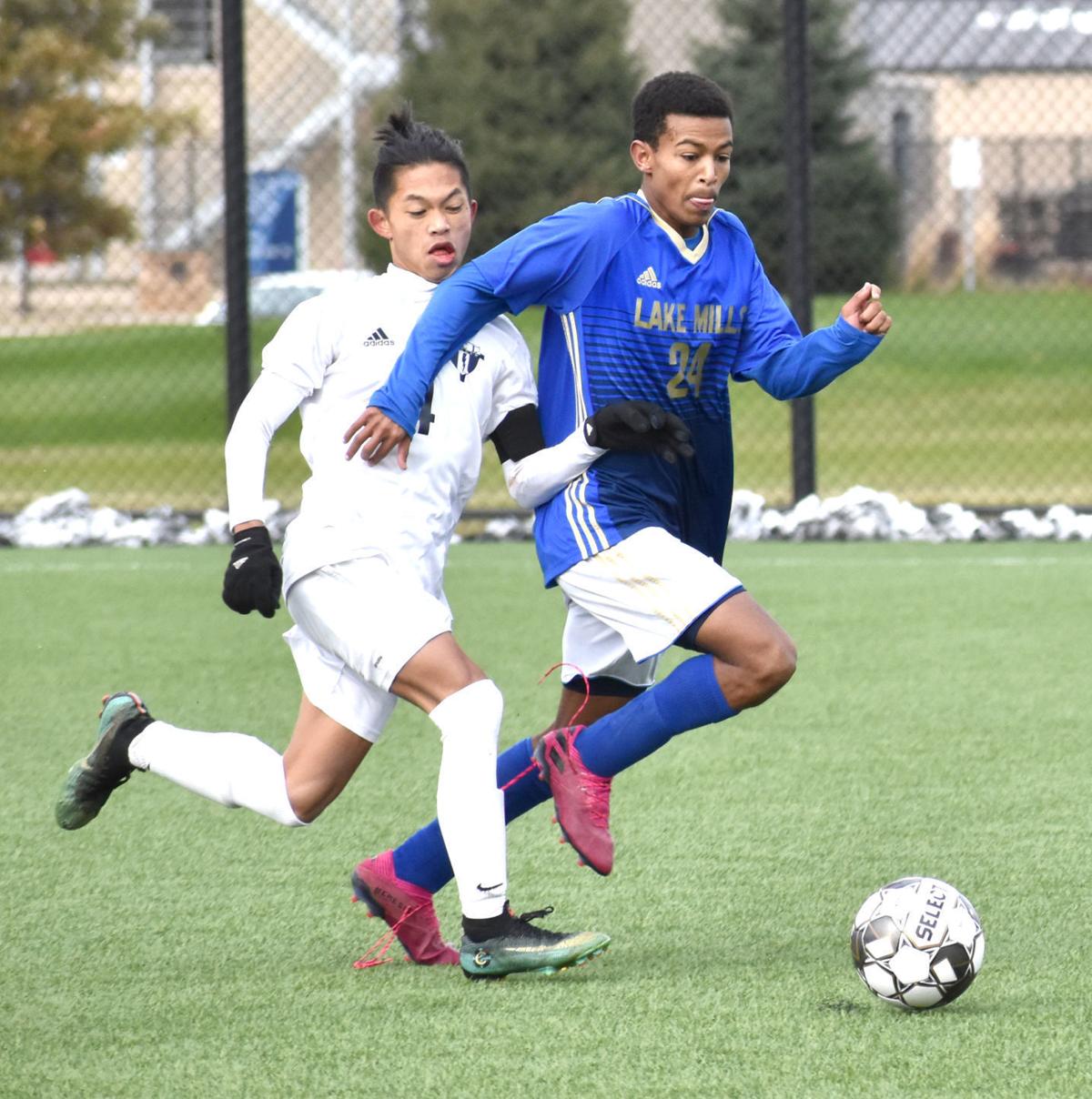 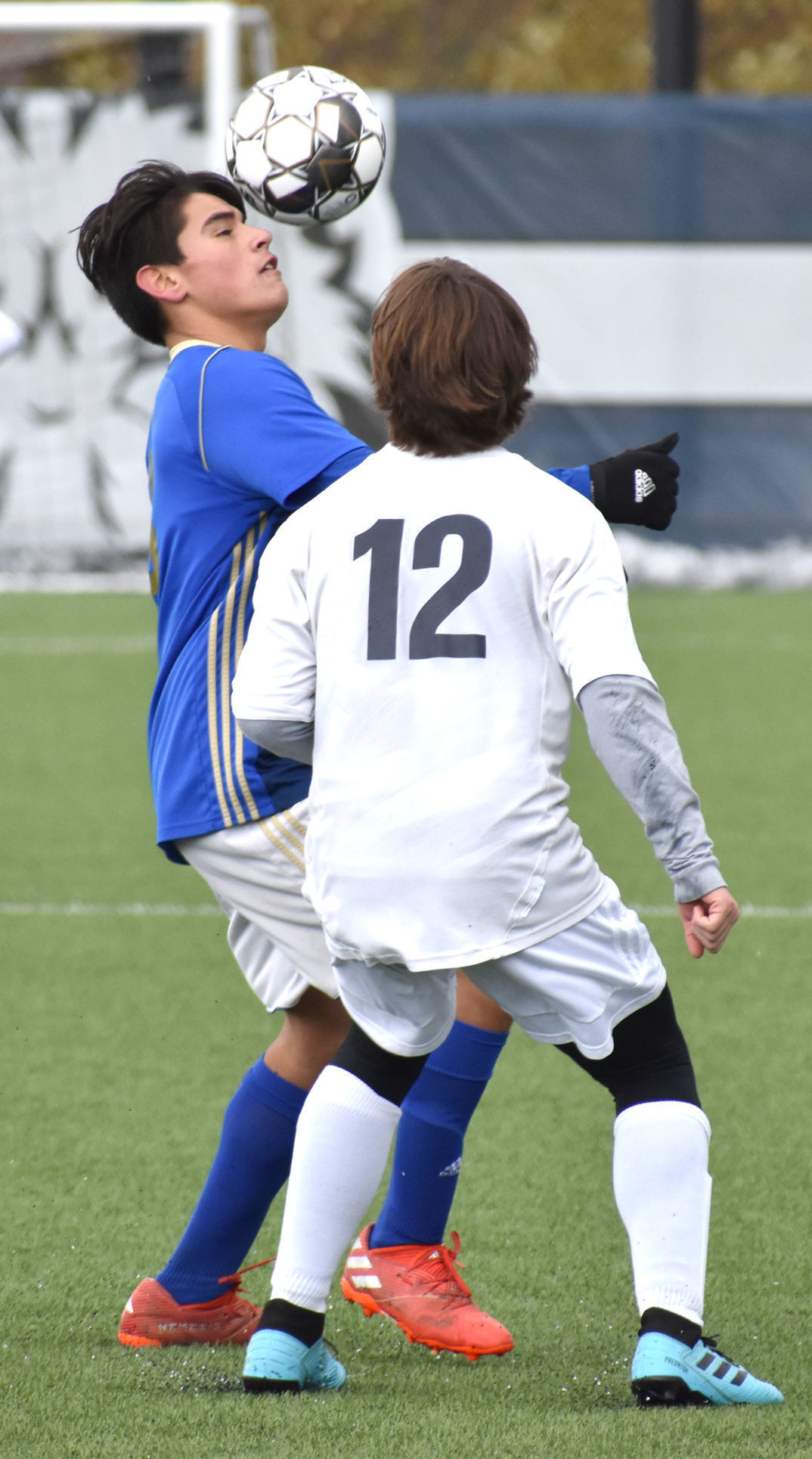 The team’s revamped workout routine includes no long-distance running and plenty of yoga and core training.

This type of training paid dividends in a big way when the Lake Mills boys soccer team qualified for the WIAA state tournament for the first time in school history by beating Lake Country Lutheran 2-2 (3-2) in Saturday’s sectional final. Sophomore midfielder Brayden Ciesiolka knocked in the game-winner in the fifth round of the shootout.

“From the start, we have worked on conditioning, yoga and high interval training. No long distance running, one run is lap around the field is the longest we’ve run,” first-year coach Tony Cooke said. “When we run, it’s sprints and stops. When we do workouts, it’s yoga for core strength and flexibility. We’ve got players who can play 90 minutes, or 110 minutes in the case of Saturday’s match.

“They’ll be tired, but they have no problem putting that 100-percent work rate in for an entire match. That’s the result of being in condition early in the season and staying in condition. Twenty-five matches is a lot of time on the field, these kids are in peak game shape.

“That’s one thing I emphasized from the start is that I wanted to make the emphasis be on becoming better athletes, people and teammates and then better soccer players as the result of that. That’s worked out really well.”

The L-Cats received the fourth seed in the Division 4 state tournament that begins Thursday in Milwaukee and will take on the top-seeded Prairie School of Racine in the semifinals at 11 a.m. at Uihlein Soccer Park.

“It’s been crazy,” junior forward John Wilke said of reaching the state tournament. “This is the first time we are competing at state. We are going to have a parade before we leave on Thursday. They are going to escort us out of town which is amazing. It’s unreal to me that we won. A lot of the people at our school are going to the game to support us.”

“It’s been really cool. Everyone is super excited about it. It will be perhaps the most watched soccer match in Lake Mills history, which is pretty wild,” Cooke said. “Hopefully it gets more people interested in our soccer programs, the girls soccer programs and youth programs, maybe turning the corner and having soccer be a more prominent sport in town.”

The Prairie School is no stranger to the state stage, having won D4 titles in 2014 and 2017. The L-Cats (14-8-3) are confident they can continue playing their best soccer.

“Our kids are stoked for it,” Cooke said. “The season doesn’t seem to end in a really awesome way. We play to the best of our ability and keep winning. We feel we can play with and beat anyone. The Prairie School has been to state numerous times and won it multiple times. The level of opponent is going to be extremely high so we know we have to be on our best game but we also know we can play our best game and are looking forward to the opportunity.”

The L-Cats overcame a 2-goal deficit against LCL in the finals and hung on tight for a 2-1 win over Wisconsin Heights/Barneveld in the semifinals on a frigid night. Wilke admits there will be nerves but once the match starts, it’s game on.

“In the second half against Lake Country, when we were down two, we came back. When we play Prairie, we will be nervous at the start,” Wilke said. “Once we get into the game, we will see each other as rivals. We won’t see them as better then us. Anything can happen in the playoffs.”

Anything can indeed happen in the playoffs and it did. The top seed in Lake Mills’ bracket, Central Wisconsin Christian, was ousted by 17th-seeded St. John’s Northwest Military Academy 2-2 (3-1) in the regional semifinals.

As for the team’s next foe, Cooke has a versatile group that is willing and able to play out of position if the situation dictates it.

“We are a very fluid team. We have no problem switching positions,” Cooke said. “The kids know if there is a position that suits them better (in a match), they can switch. We have a good level of trust in everyone since everyone is working toward the same goal ... Our thinking is reactive, it’s ‘this is the situation we are in now, how do we deal with it?’”

Wilke has scored 33 goals for the season, tied for 12 in the state and has totaled 78 points. Ciesiolka has 12 goals and 25 points while junior forward Drew Stoddard and sophomore midfielder Jailen Ortega both have 10 goals.

Senior Connor Dean, who made a leaping save to his right late in penalty kicks against LCL, has been solid all season, giving up 42 goals in 22 matches. He has a save percentage of 80 percent.

The rest of the defense has been pretty stout too.

“We have two amazing center backs in senior Camden Schultz and sophomore Lucas Hart, those two have played 90 minutes of every match, same with Brayden and John,” Cooke said last week. “(Schultz and Hart) lock down the center. Freshman starter Miguel Ortega and sophomore Sam Wolff have been our primary fullbacks. They have been doing a great job of keeping up with the offensive attack.”

“We’ve done a really good job of not getting down,” Cooke said. “We’ve been down on goals but not down on ourselves. We’ve bent instead of breaking, we’ve come back to tie it up or win. That’s a feather in the kids’ cap in terms of resiliency. Not a lot of teams can do that. It’s been a fantastic year, couldn’t have asked for a better group of kids. Looking forward to the future and what that brings.”

Wilke knows the practice reps have helped pave the team’s path to state. Now, it’s about making some noise on the big stage.

“It’s allowed us to last longer then other teams,” said Wilke of the conditioning program. “We’ve been doing a lot of running so we can start and finish strong. Everything we’ve done at practice has helped us get better when we are in the game.

“My teammates and I are really ready for the game, since we have the support of the entire city, that’s going to give us the energy we need to win this game.”