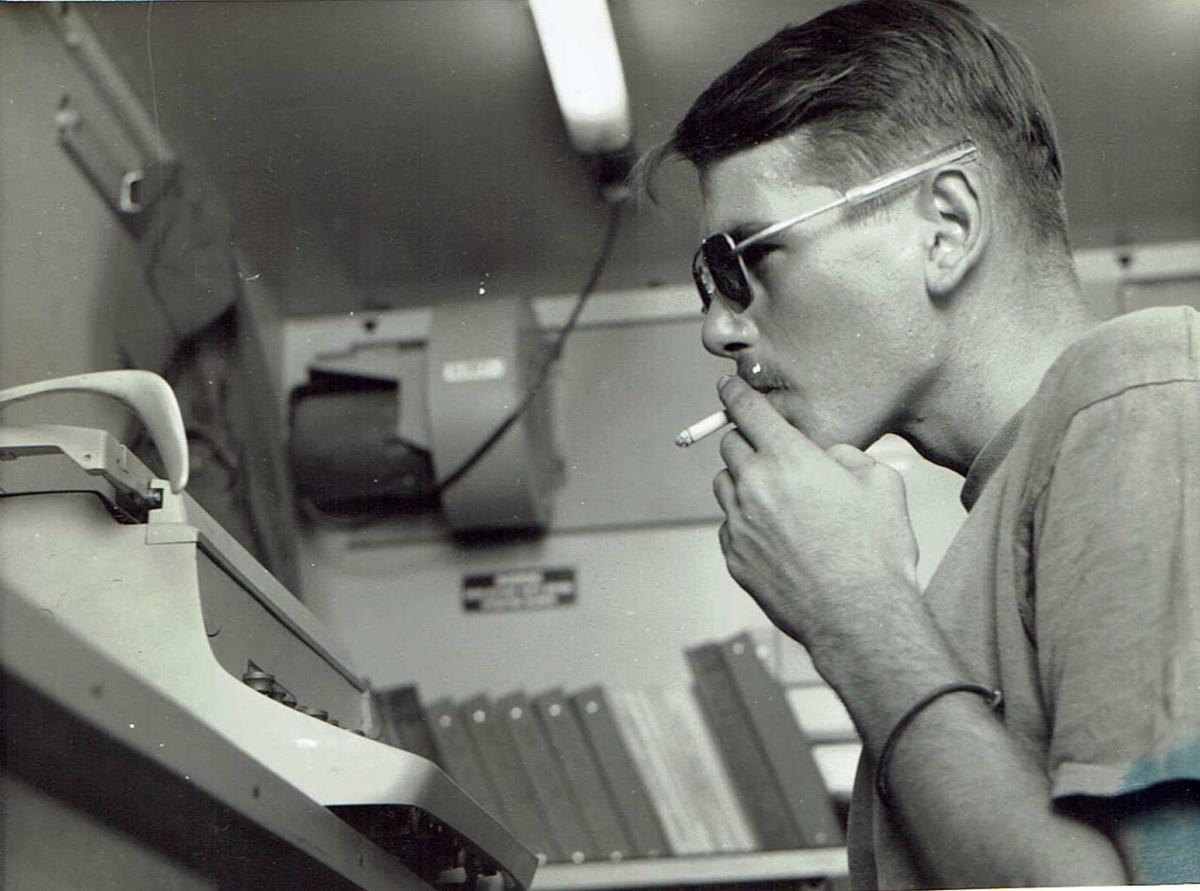 Greg Hesse is seen during his time as a radio operator in Vietnam. 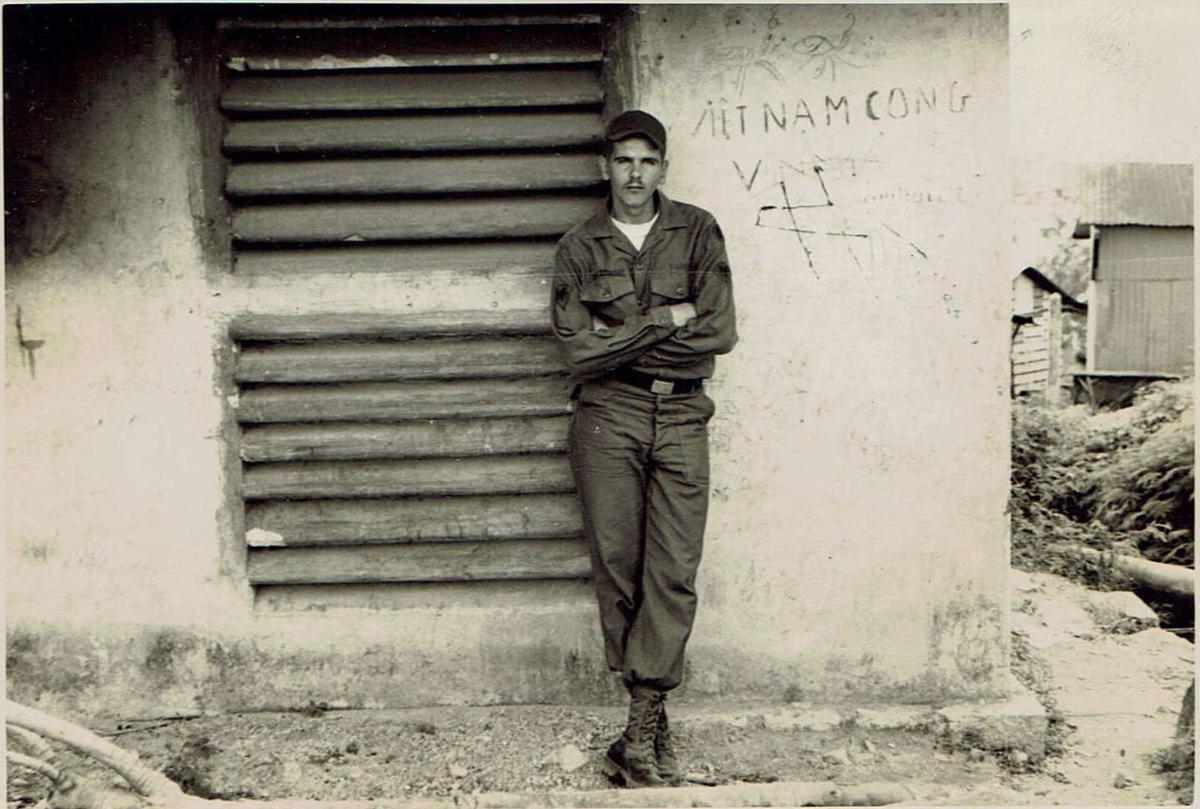 Greg Hesse stands next to Viet Cong writing on a building while he was deployed to Vietnam.

Greg Hesse is seen during his time as a radio operator in Vietnam.

Greg Hesse stands next to Viet Cong writing on a building while he was deployed to Vietnam.

The Vietnam War shaped the lives of many young American men in the 1960s. For Greg Hesse, a Southern California native, it was an experience that taught him what it means to be an American.

Hesse graduated from high school in 1964 and did as many young men do.

“I spent my time chasing girls and surfing. It was a pretty good life for an 18-year-old guy.”

He enrolled at the University of California Los Angeles without a degree in mind.

“College never went anywhere for me,” he said sighting a passion to surf over going to class. “I kept enrolling because I got the deferment.”

Eventually he was drafted. Hesse now of Lake Mills was drafted into the Army in Sept. 1966. He did basic training and radio school at Fort Ord, Calif. He went to Fort Gordon in Georgia for radio teletype school.

“I learned Morse code, among other things,” he said. “I don’t remember anything. It’s like a foreign language.”

Hesse and several other radio operators went to Fort Bragg in North Carolina to train with the Green Berets.

Hesse and the other radio operators trained with the Green Berets and were treated in the same way.

When he was at Fort Bragg one of his duties was to use a Military Auxiliary Radio System to try to contact bases in Vietnam to patch telephone calls from GI’s back to home.

“It wasn’t always nice. I heard a couple of ‘Dear John’ calls. I had to be in the middle to switch back and forth. It was kind of disturbing.”

In Vietnam Hesse was stationed with the First Logistics Command in Nha Trang as a radio teletype operator.

“What I did, much of it was and I would imagine still is classified. I had a secret clearance. We sent coded messages, mainly within our command.”

His job was to send and receive those coded communications.

“I was never in combat. We were attacked during the Tet Offensive in January or 1968. It was scary.”

The communications hut was on the perimeter of the base at Camp McDermott.

“During the offensive we were out there with weapons hiding behind sandbags.”

Hesse spent 11 months in Vietnam. Normally a tour was 12 months, but Hesse was able to leave early to enroll in college.

“I was able to get an early out to register.”

Hesse didn’t experience what some Vietnam veterans did when they came home.

“What I found mostly was apathy,” he said of people’s views. “I wasn’t ashamed, nor was I particularly proud of having been in the Army. I looked at it as part of the responsibility of being an American citizen.”

Hesse remembered a time when he was home on leave and saw some guys sitting on a front porch on a Sunday afternoon drinking beer.

“I don’t know if there are other countries where they could do that, just sit around on a Sunday afternoon. That’s part of the responsibility and duty of being a citizen of this country.”

He thinks it’s a good idea for everyone to do some type of public service to get them away from home and see other parts of the country and the world.

“That’s why I thought the draft was a good thing. I met people I never would have met otherwise.”

As far as Vietnam went Hesse said he had nothing against those people.

“Maybe I won’t have to kill any of them, but as part of the war machine I was partially responsible.”

He said he didn’t fear being drafted all those years ago.

“I rationalized it, if I went over there I don’t think I’m going to die, but I might get this bad leg turned into a carved wooden peg leg and I thought that would be pretty cool.”

Hesse’s friend Dale Linges of Lake Mills, who he met in Vietnam, is what brought him to the area.

“I was in St. Louise with a friend and I said, ‘This is somewhere near Wisconsin.’ So, I drove up here, hooked up with Dale and he was dating the woman to whom I am now married and have been for over 40 years,” he said. “You hear war is hell and all of that but if it hadn’t been for that I never would have met her, and I certainly wouldn’t be in Lake Mills.”

Hesse and his wife Connie have been married for 46 years. They have two children Jack and Sarah, who both work in IT and live in Monona.

He was mustered out of the Army from Fort Lewis, Wash.

“They give you money to fly home, for me it would have been to LAX, but I pocketed the check and hitchhiked,” he said.

It only took three rides for him to get from Washington to LA.

Growing up in California Hesse never thought he would live anywhere else.

“That’s where I lived, but getting away from it for a few years, the two years I was in the Army and coming back to it, it was a whole lot of everything and it was all moving really fast. I was terribly uncomfortable.”

He stayed in California for about two years, but he decided he didn’t have a reason to stay. He wasn’t close with his sister or step-brother, who coincidentally was also at Fort Ord for basic training at the same time and he didn’t even know it.

“My step-brother was in the barracks right across from us.”

Linges offered him a place to stay on London Road and he’s been in Lake Mills ever since.

“I had a 54’ Chevy pickup truck, threw everything in the back and drove out.”

After coming to Lake Mills, Hesse worked a couple of different jobs and Linges, Hesse and some other friends played in a band in the area.

He did that until he got married.

He worked several years at Lamco in Lake Mills and did an apprenticeship through the VA to learn how to cut meat at Steve’s Grocery for three years. He then worked at Jones Dairy Farm for 10 years before going to work for the Postal Service for 24 years before he retired.

Hesse and his wife have spent their retirement traveling. They spend the winters in Mexico.

Hesse went on the Badger Honor Flight in May. It took about two years for him to get on the flight. His daughter Sarah accompanied him to Washington D.C.

“I raised her right,” he said of his daughter. “She is not pro military or pro government aggression in any way, but when she went to the orientation she said, ‘This is the kind of patriotism I can get behind.’ It’s taking old guys like me and giving them a unique experience. It’s about the people.”

The experience of the Honor Flight was one of a kind.

“For me the highlight was Arlington, all the graves,” he said. “The real highlight for me was getting back to Dane County Regional Airport with all the people that were there, hundreds of people and bands and beauty queens. It was all the people, average people.”

There was one woman in particular Hesse remembers.

“I shook hands with her and she wouldn’t let go of my hand. I was almost moved to tears.”

Hesse learned of the Honor Flight through his connections at the American Legion Post 67, of which he has been a member for 43 years. He was encouraged to join many years ago by a friend named Clint.

“Clint said to me, ‘We need guys for the firing squad. It’s the last thing you can do for a guy is fire at his funeral. That made sense to me, so I joined.”

Several years ago, when he was bowling in the Legion tournament he was told he didn’t pay his dues, when it happened again the next year he found out he wasn’t getting renewal notices because the American Legion thought he was dead.

Hesse has also had to deal with the effects of Agent Orange.

He has congenital heart failure due to the exposure.

“Camp McDermott, where I was just nasty with Agent Orange. They used it not only as a weapon to expose enemy positions, but they also used it as an engineering tool to clear roads and make bases like they did at Camp McDermott.”

At that time being declared disabled for veterans could be a difficult process, Hesse said. He used the help of Jefferson County Veterans Service Officer Yvonne Duasterhoeft who connected him to the state and national veteran service office.

“Within a week I was declared disabled and unemployable.”

Hesse said anyone who thinks they have a military service connected disability should contact the Jefferson County Veterans Service office to get the help they need.

“We are blessed to have Yvonne in Jefferson County.”