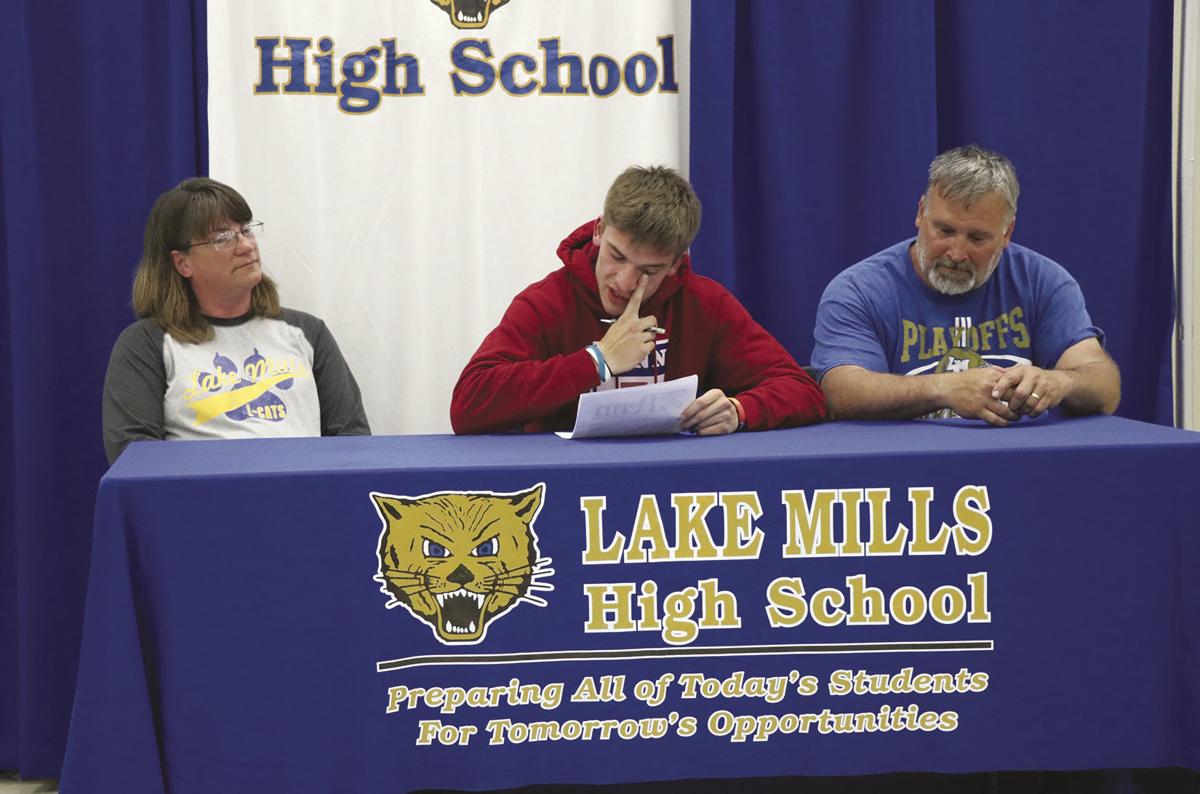 Lake Mills athlete Ben Dunkleberger (center) wipes away a tear as he thanks his parents while reading a prepared speech announcing his choice to run at the University of Pennsylvania next season. His parents, Stacie (left) and Harold (right) Dunkleberger, were with him at Lake Mills High School when he made his announcement May 9. 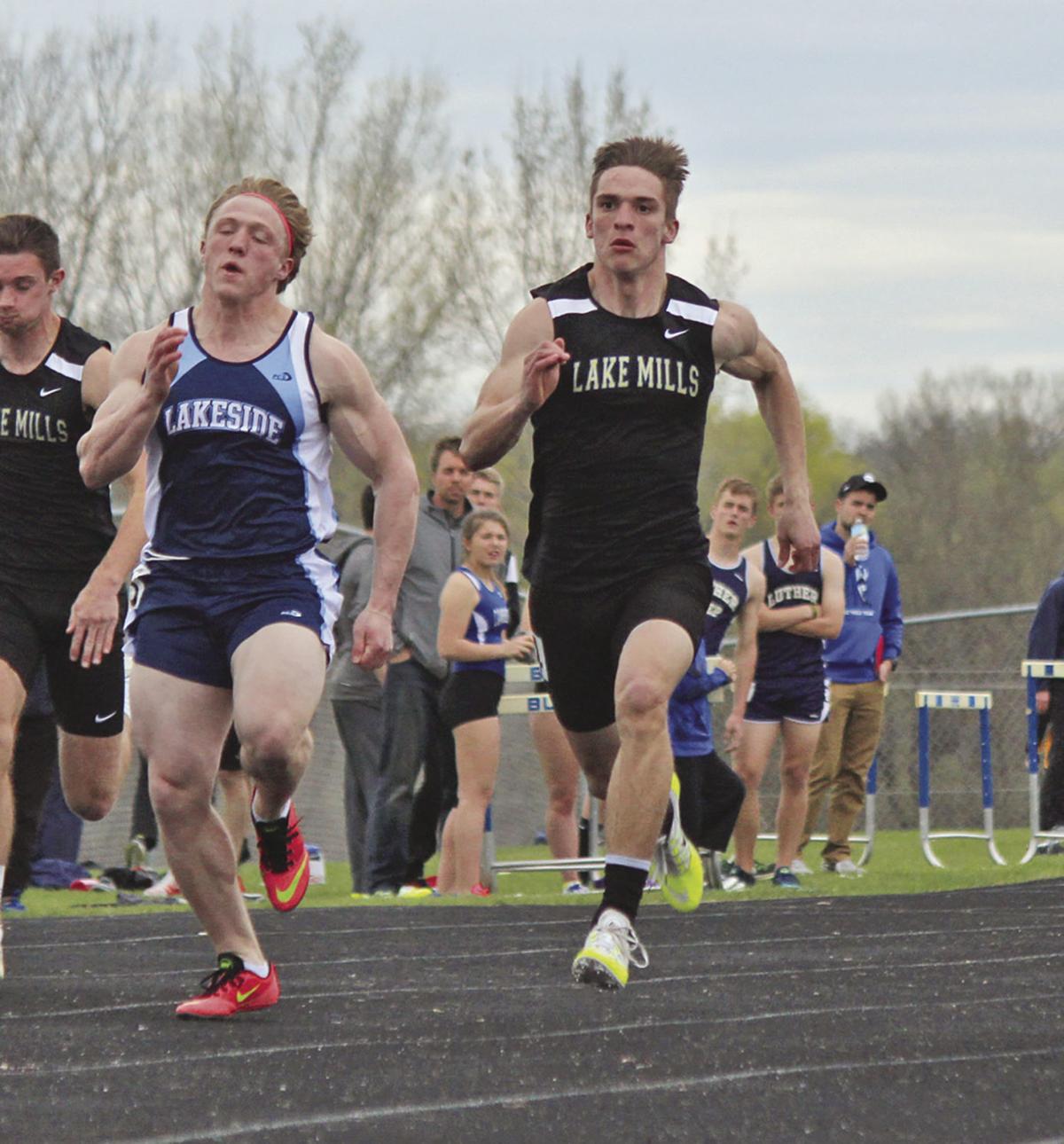 Dunkleberger (right) will use his considerable speed and athleticism as a multi-event competitor for the Quakers while at University of Pennsylvania. 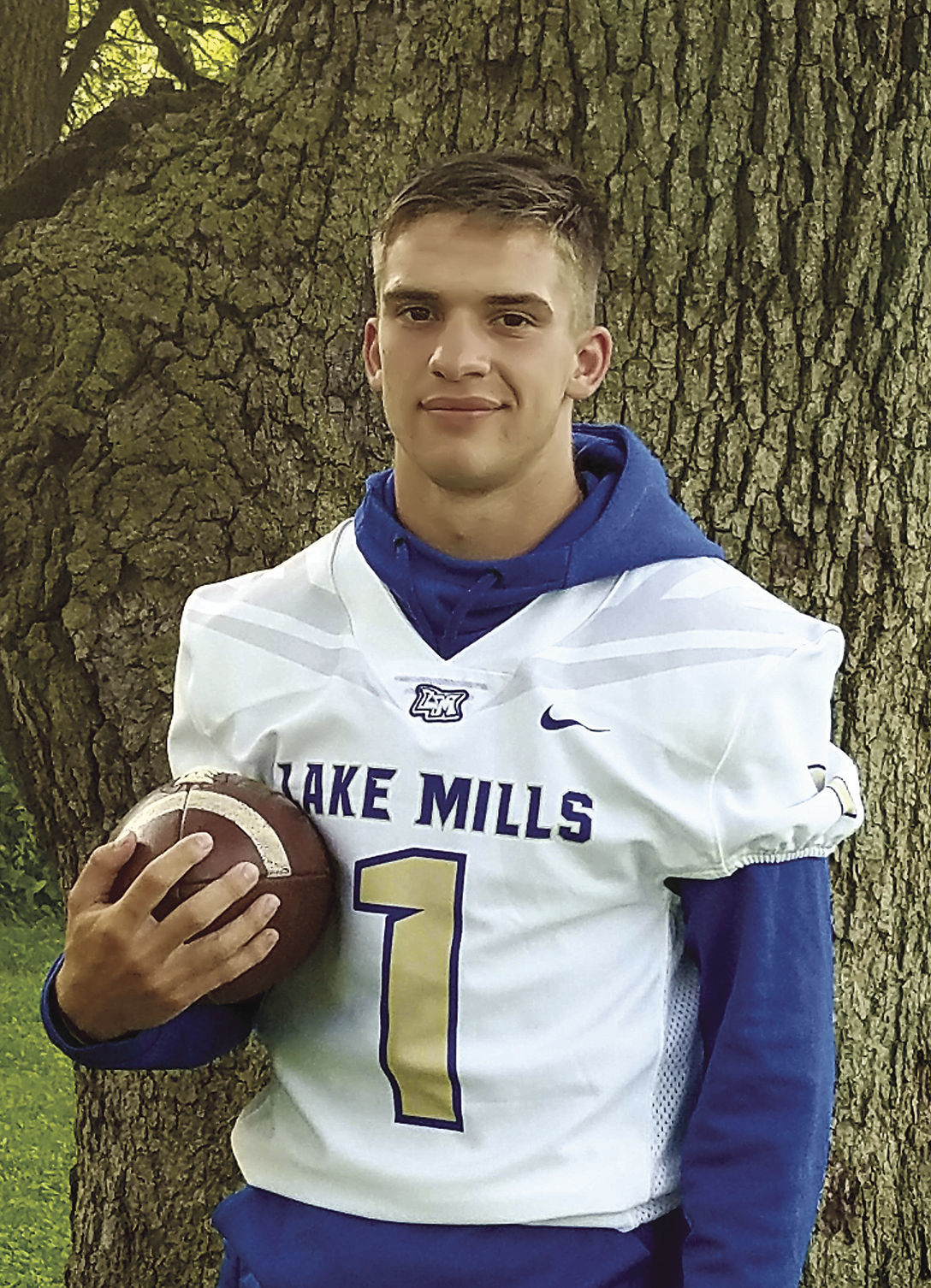 Dunkleberger also stood out on the football field, where he was one of Wisconsin's leading passers in 2017 after accruing 2,777 yards through the air.

Lake Mills athlete Ben Dunkleberger (center) wipes away a tear as he thanks his parents while reading a prepared speech announcing his choice to run at the University of Pennsylvania next season. His parents, Stacie (left) and Harold (right) Dunkleberger, were with him at Lake Mills High School when he made his announcement May 9.

Dunkleberger (right) will use his considerable speed and athleticism as a multi-event competitor for the Quakers while at University of Pennsylvania.

Dunkleberger also stood out on the football field, where he was one of Wisconsin's leading passers in 2017 after accruing 2,777 yards through the air.

The senior year of high school can be filled with some tough choices for students, chief among them being what comes next.

For Lake Mills’ Ben Dunkleberger, at least, that next step is already known.

The three-sport athlete was the centerpiece of a short ceremony May 9 at Lake Mills High School where he announced to assembled family members, coaches, and friends that he will be attending the University of Pennsylvania starting in the fall of 2018. He will be part of men’s track and field program under the tutelage of head coach Steve Dolan and assistant John Nolan.

The L-Cat athlete’s parents are proud of their son, who is closing in on his final races at Lake Mills and has one last football game to play in the Wisconsin Football Coaches Association all-star game in June before heading off to Philadelphia.

His mother, Stacie, said her son has been speaking with the University of Pennsylvania coaching staff since last season, but felt the campus is what sold Dunkleberger on the Ivy League school.

“He said he wants to study history; he said something about wanting to be a professor,” she began. “He’s just a big history buff, and he’s super excited, because when we went to tour the school, all those old buildings – those are right up his alley.”

Dunkleberger read from a written announcement about his choice, and expressed his gratitude to his coaches and family.

“Thank you to everyone who helped me with this decision. You have all been a big part of my success,” he said to open his announcement.

The Lake Mills student acknowledged his parents’ sacrifices of time and energy, and his siblings’ competitive spirit for teaching him how to succeed in athletics.

Dunkleberger said after the ceremony he is excited to be moving to Philadelphia, and will be competing in multi-events. According to track coach Dan Zaeske, the L-Cat sprinter and jumper has already begun preparations for his next athletic career.

“He’s the hardest worker (I’ve known),” Zaeske said. “I know a lot of coaches say that, but he comes in at 5:30 in the morning, he does hurdles, he stays after practice until sunset each night.”

The L-Cat coach said Dunkleberger’s athleticism will help him in the multi-events as a college student, but he’s just as proud of Ben being kid who separates himself sometimes at meets, and can often be found off somewhere deeply immersed in a book.

The Lake Mills athlete indicated books may figure into his love of history and desire to study it, but he also wanted to acknowledge his athletic accomplishments.

“I don’t know if I want to go into research or teaching yet, but I kind of like the story aspect of it,” he said of his chosen major. “All of history, to me, is kind of like a big story. I wanted to use my athletic prowess to get the best education I could.”

Dunkleberger’s new coach, Nolan, said he connected with the L-Cat sprinter and jumper early in the recruiting process, and it became clear quickly that the young Wisconsinite was looking for a place that challenged him both as an athlete and a student.

“He had a very clear idea of a particular area of history that he wanted to study (comparative history) which demonstrated to me that he had done his homework on Penn,” Nolan wrote in response to questions. “For someone as talented as he is, he is incredibly humble yet still fiercely competitive, which is exactly what I’m looking for in my recruits.”

Nolan said Dunkleberger is already good enough in horizontal jumps to compete in the Ivy League, but the coaching staff sees potential in him as a multi-event competitor. He said he was already sold on the upcoming high school graduate, but then he saw Dunkleberger’s football tape, and was “blown away.”

The Penn coach said the incoming college freshman will spend his first year developing his sprint mechanics, posture, and explosiveness – all of which are hallmarks of the Quakers’ program. Nolan also said Dunkleberger will learn the fundamentals of new events, and how to be a multi-event athlete by treating a decathlon as a single event instead of 10 separate ones.

He is a two-time state champion in triple jump, where he set a new state record of 47 feet in 2017; he also was the 2017 state champion in long jump with a 23-foot leap. Dunkleberger served as the L-Cats quarterback in 2017, taking the team to a level-three playoff contest against Lodi before being eliminated from the tournament.

Statistics on Wissports.net indicate he passed for 2,777 yards, and was fourth in the state on the website’s list of top quarterbacks. which put him in fourth place among other quarterbacks in the state.

He also rushed another 1,416 yards, and threw for 36 touchdowns.

He will play in the WFCA all-star game next month, and was the Capitol-North player of the year in 2016 and 2017.

Dunkleberger was also a member of the 2017 L-Cat basketball team that played in the state semifinals. He was a starter and noted for playing strong defense.