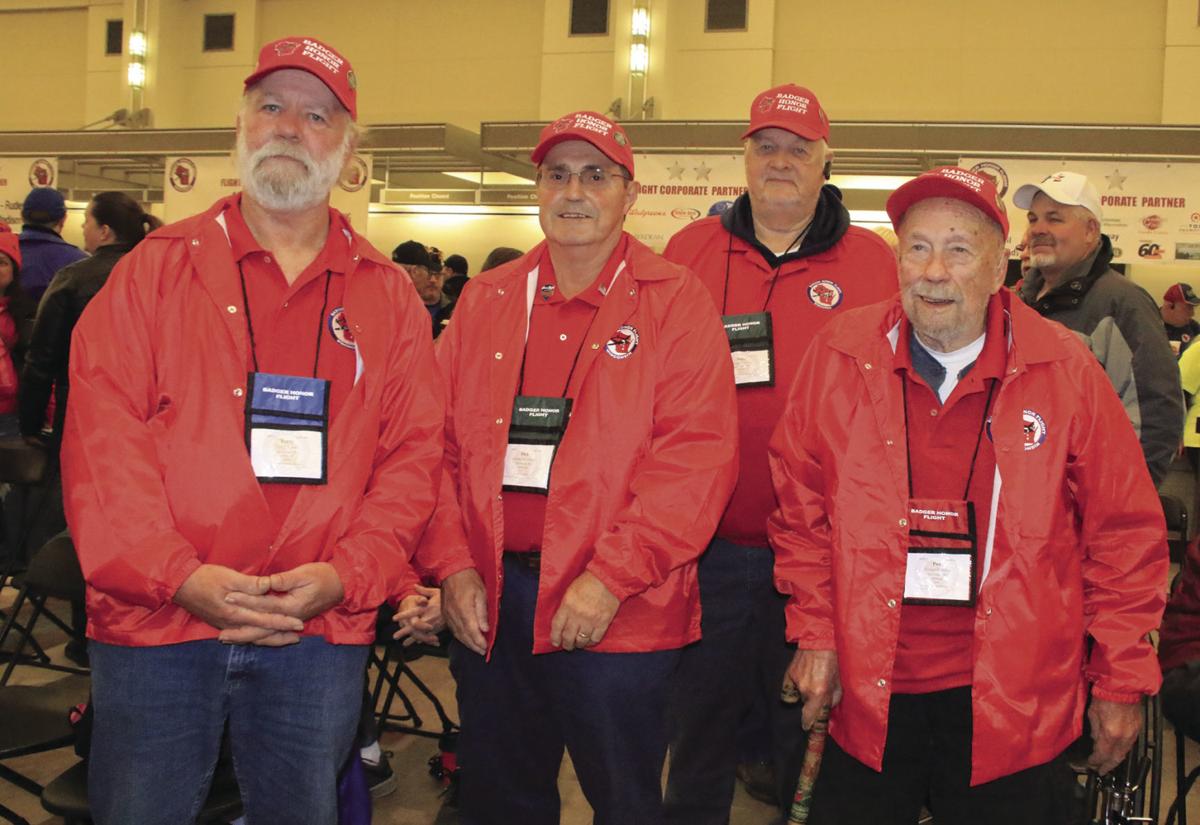 Several area veterans went on the Badger Honor Flight on Saturday, Nov. 2. Getting ready to board the flight are, from left, Terry Bender, Dick Metcalf, Mike Myers and Dick Reiter. 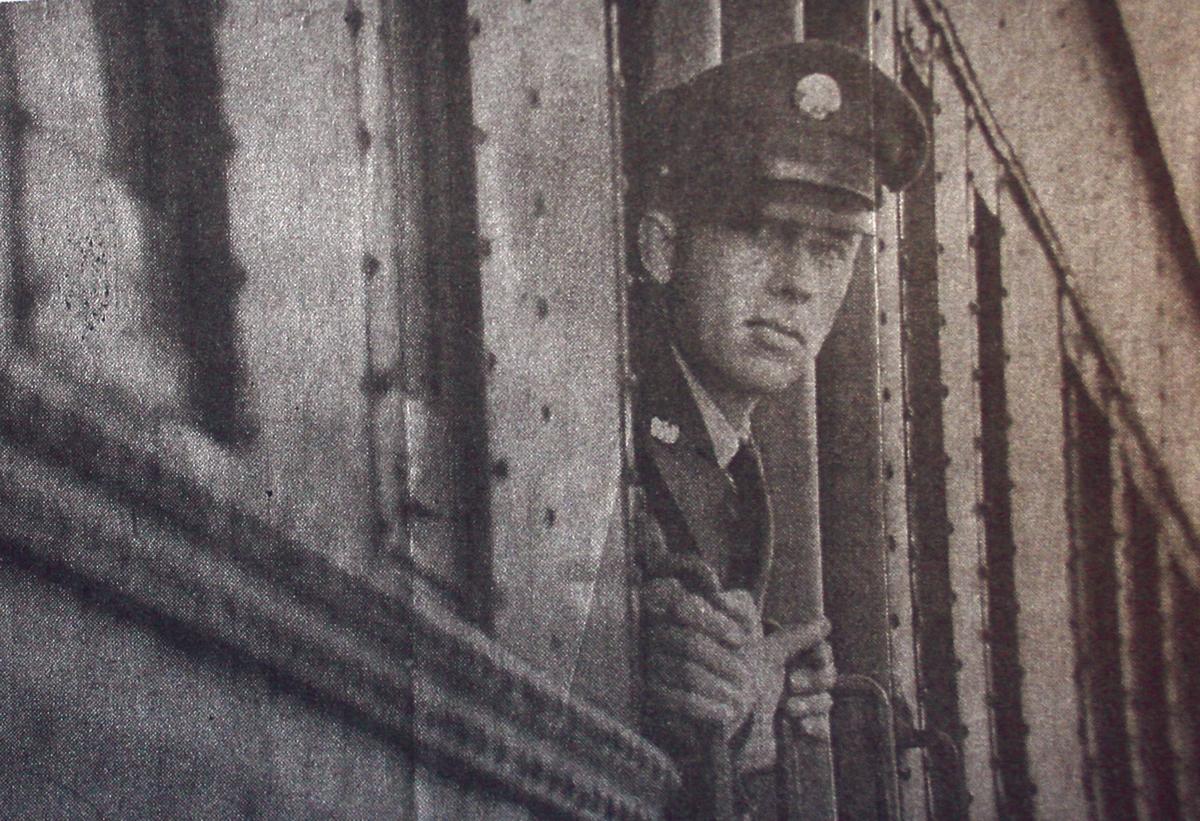 Dick Reiter looks out the train window before it pulls out of Madison. 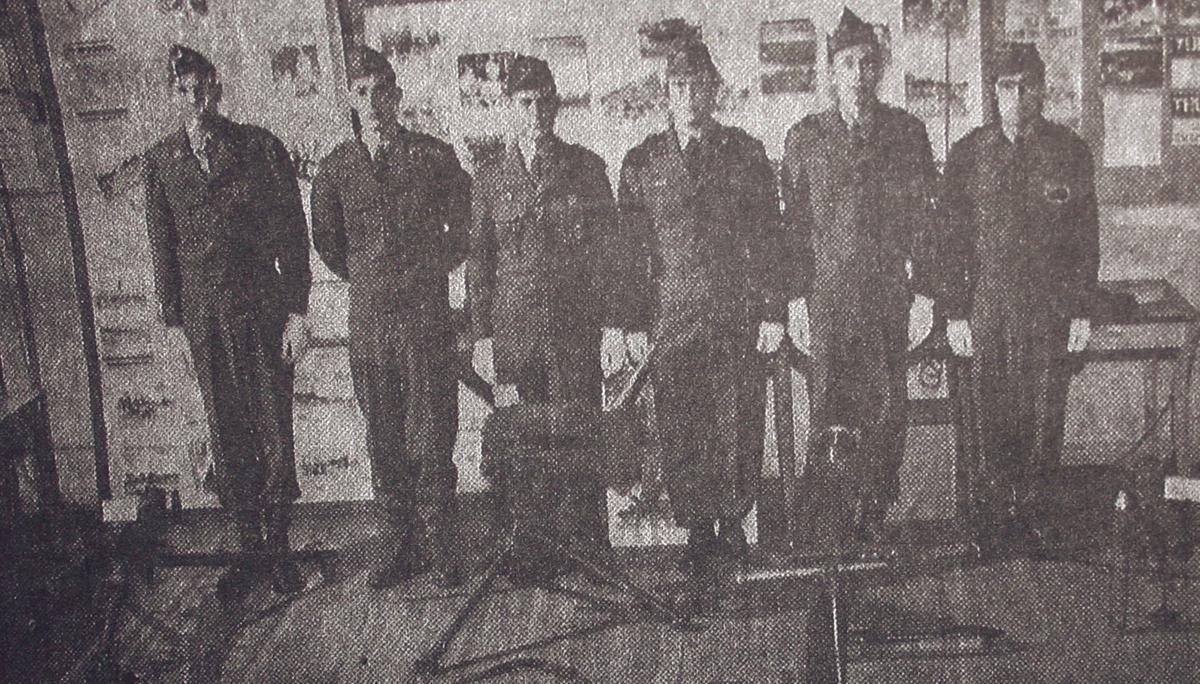 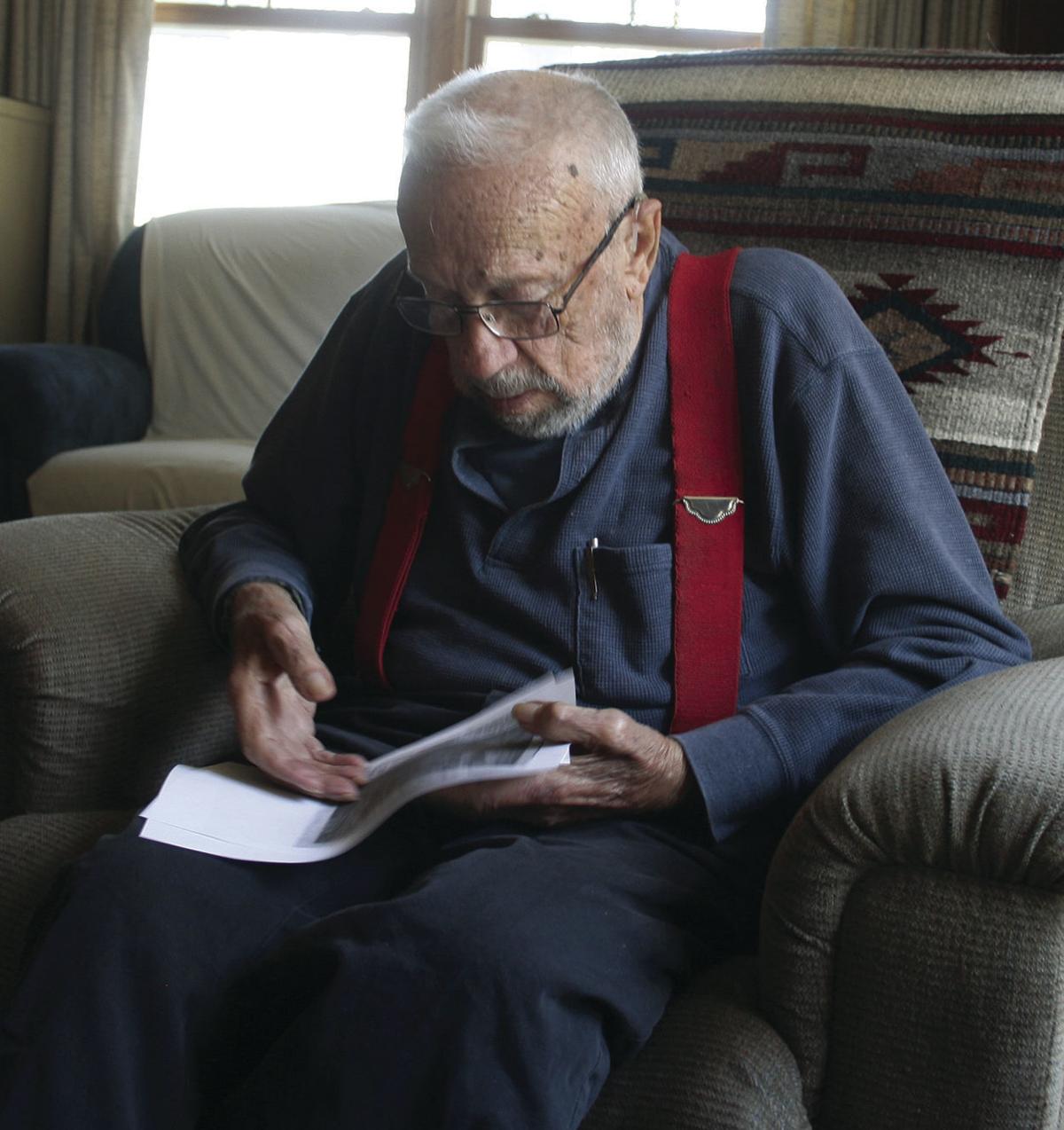 Dick Reiter looksover photographs taken of him for the newspaper during his time in service.

Several area veterans went on the Badger Honor Flight on Saturday, Nov. 2. Getting ready to board the flight are, from left, Terry Bender, Dick Metcalf, Mike Myers and Dick Reiter.

Dick Reiter looks out the train window before it pulls out of Madison.

Dick Reiter looksover photographs taken of him for the newspaper during his time in service.

Dick Reiter was excited to recall the time he spent on the weekend’s Badger Honor Flight.

Reiter had a 12-year career in the 32nd division of the National Guard where he was a platoon sergeant.

Reiter enlisted in the Wisconsin National Guard after several friends had joined. Upon enlisting, the thought he would be sent overseas.

“Because at that time the Korean War just started and everybody’s getting drafted,” he said.

He ended up not being deployed and spent his career in Wisconsin and Washington.

Reiter was born in Chicago and spent each summer at his grandparents’ cottage on Lake Waubesa. When he was 12, his parents purchased McFarland Dairy and he moved to McFarland.

The village did not have a high school at the time. He attended Madison East High School and joined the Wisconsin National Guard in December after graduation.

Reiter trained each Monday and for two weeks every summer as the National Guard did not yet send new recruits to basic training until four years after he enlisted.

“The first two years we went to Fort Ripley in Minnesota, and all I remember up there was the mosquitoes were so bad. They were as big as birds,” he said.

They later spent time at Fort McCoy, which was then called Camp McCoy.

He met his wife after moving to Wisconsin in seventh grade, but the two did not start dating until junior year. The high school sweethearts married in 1951 and had two sons, Tom and Jerry.

In 1962, he got called up to Fort Louis in Washington for the Berlin Crisis.

“I think it was harder on them than it was on me I’m sure,” he said.

His wife was working at McFarland Dairy while taking care of their two young sons.

“She had her hands full,” he said.

When Reiter first joined the National Guard, his unit was a rifle company.

“About halfway through, about six years into my service, they changed it to a truck company,” he said.

The company went from 80 members to 150 with 120 trucks. Every member became a truck driver.

“Which was good cause then we didn’t have to sleep on the ground anymore,” he said.

As the snow fell, officials realized that having Wisconsin truck drivers worked to their advantage.

“When we got out to Washington, it snowed a couple times, and we happened to be on the road going to the Mohave Desert on a maneuver, and we had all our trucks on the road,” he said.

While the snow caused accidents, none of the Wisconsin drivers were involved, because they were used to driving during Wisconsin winters.

Reiter returned after 11 months in Washington and spent the next three months in Madison.

When his 12-year military career ended, he went back to working at McFarland Dairy until it went out of business in 1975.

Suddenly, Reiter had to make a career change. He had been volunteering with the McFarland Fire Department since he was 21 and then joined the Maple Bluff Fire Department full-time.

He was part of that department for 25 years, spending 23 years as a fire chief.

“Now I have two sons, and two grandsons in the fire service,” he said.

On Saturday, Nov. 2, Reiter went on the Badger Honor Flight. His son and Marine Corps veteran, Jerry Reiter, accompanied him.

“It was a very moving experience to visit all the military monuments in Washington,” he said.

When he left at 4 a.m., he was escorted by three firetrucks from McFarland Fire and Rescue. The department was back around 10 p.m. with seven trucks for a homecoming reception. Maple Bluff Fire Department also made a sign for him, which now sits in his living room.

In total, the veterans visited seven memorials in Washington, D.C.

“They’re all so very important because of so many people that they represent that are no longer with us,” he said.

In addition to the jacket, T-shirt and hat veterans receive, Reebok and NFL player JJ Watt gave each veteran a pair of sneakers before their release on Veterans Day.

Reiter also received another surprise on the flight.

One of his platoon members from Fort Louis, Jim Zwettler, happened to be on the same Badger Honor Flight.

“I haven’t seen him since we got out of the military, which was back in ’62, so that’s quite a while ago,” he said.

Reiter said he would personally like to thank the volunteers that participated, medical specialists and anyone else who helped put it on.

“Also there are groups that you never even see or hear from that are raising funds for it,” he said.

“If nothing else, show respect of the people who never came home, because there are many of them,” he said.