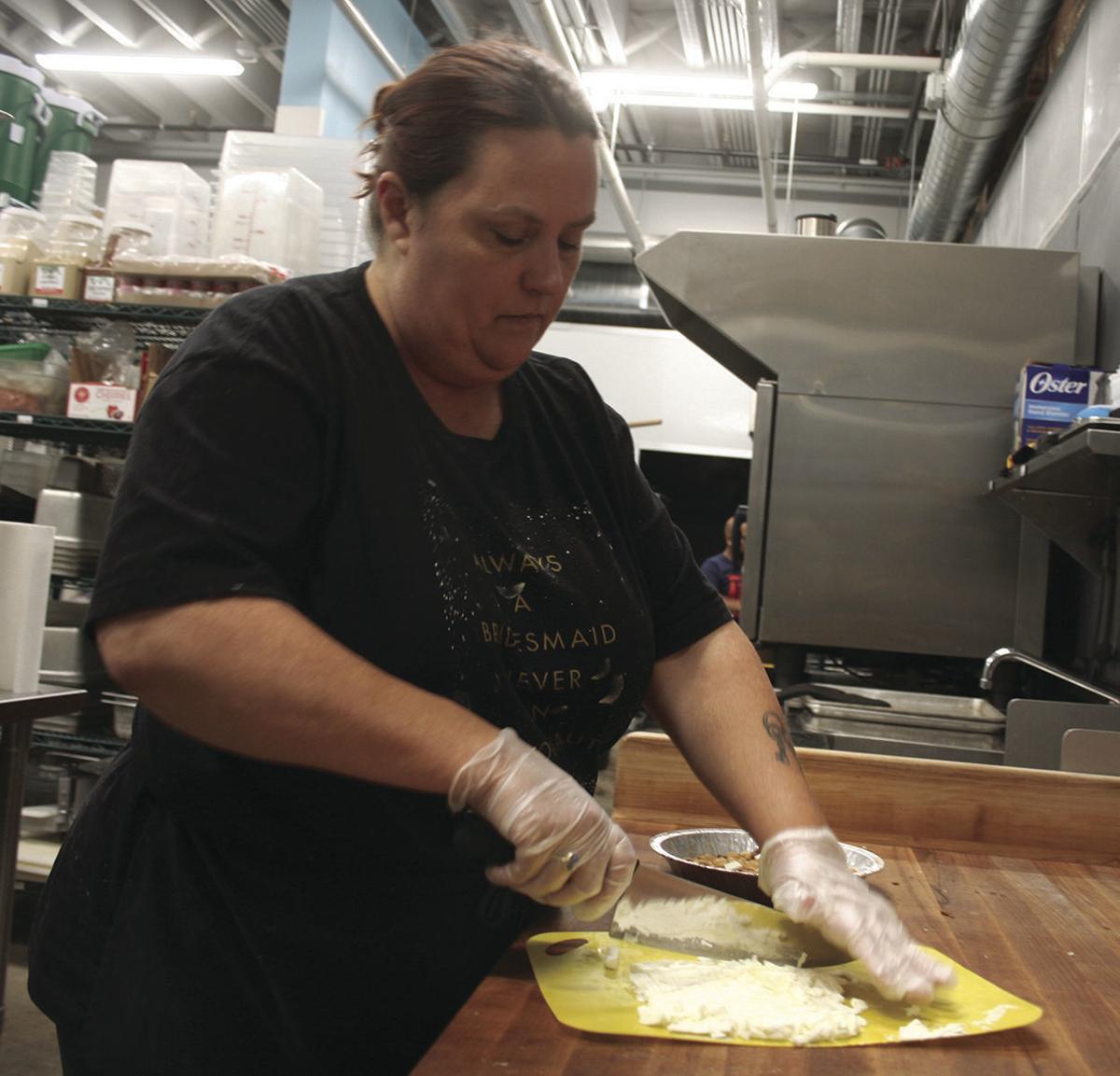 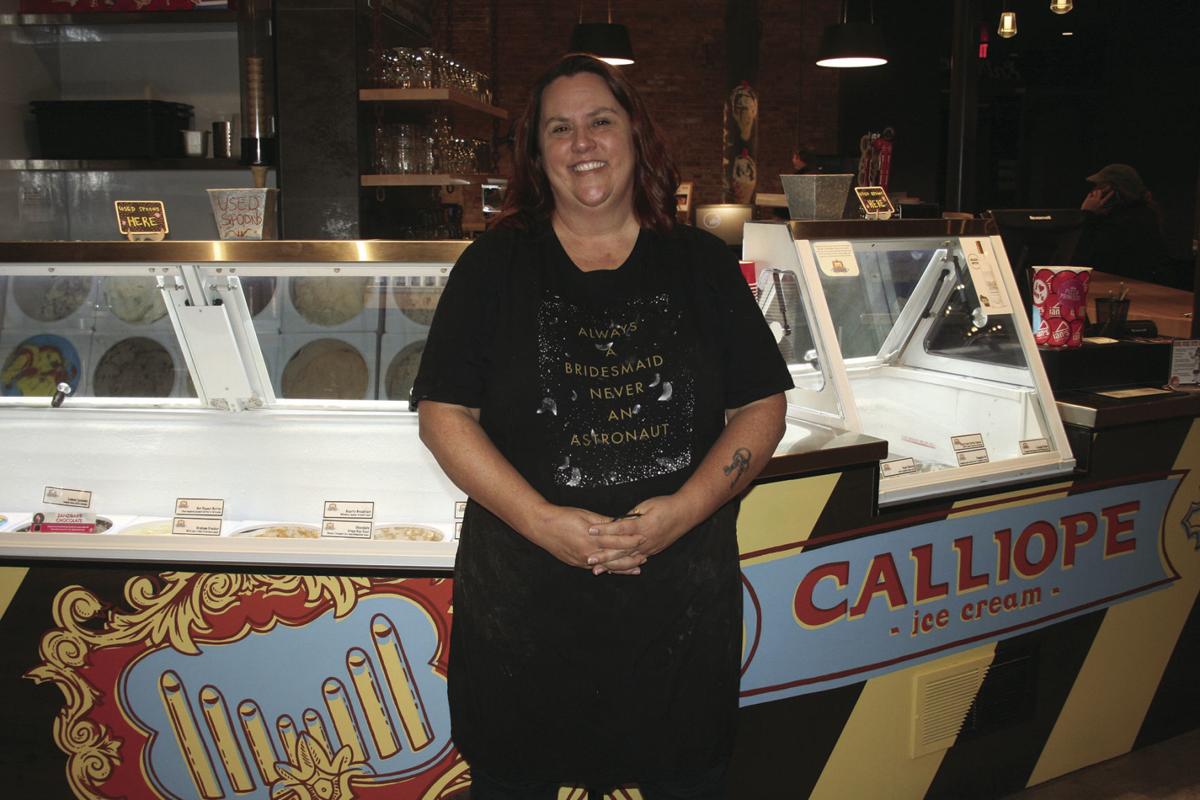 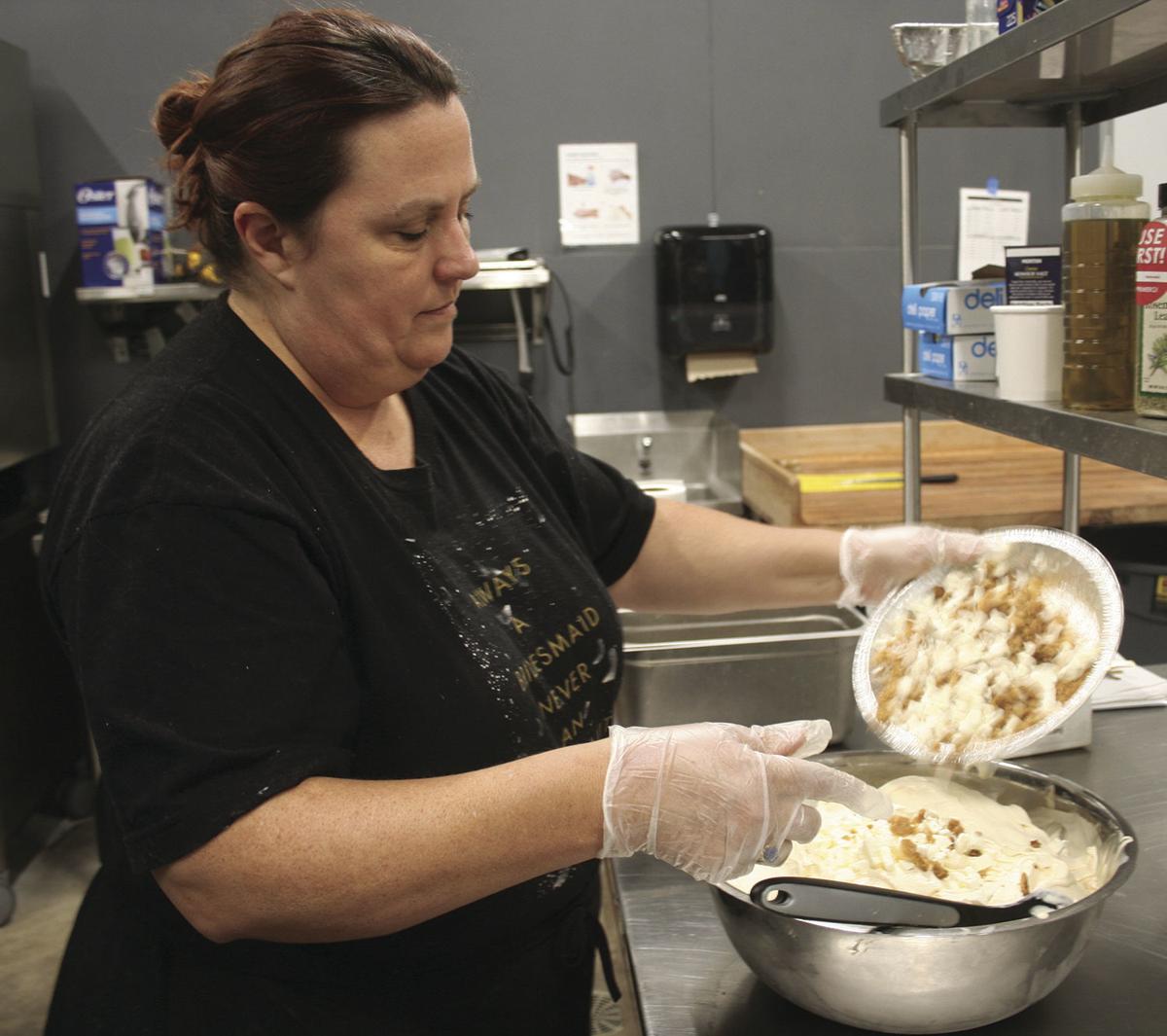 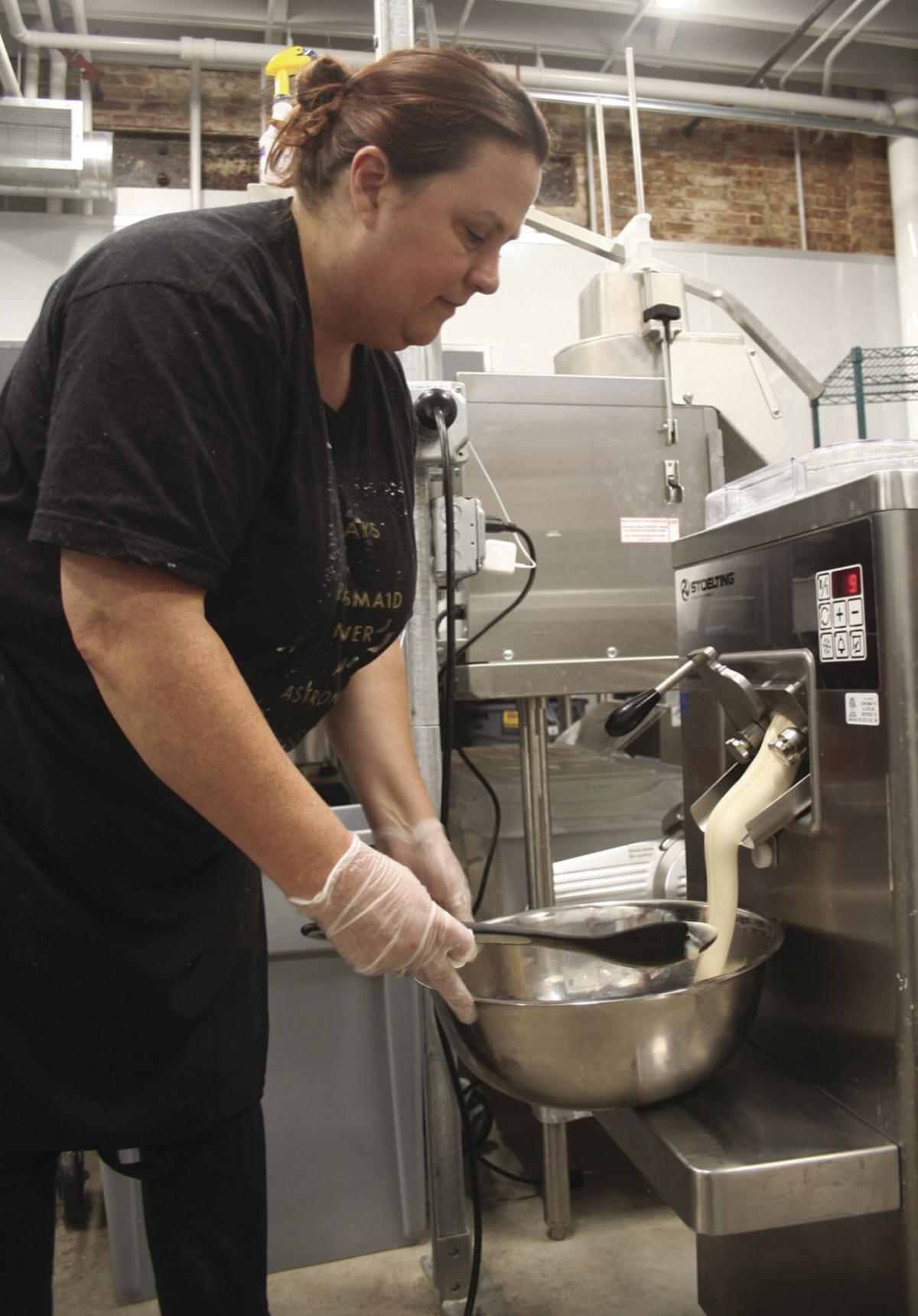 Staci Fritz collects pumpkin pie ice cream as it comes out of the batch freezer. 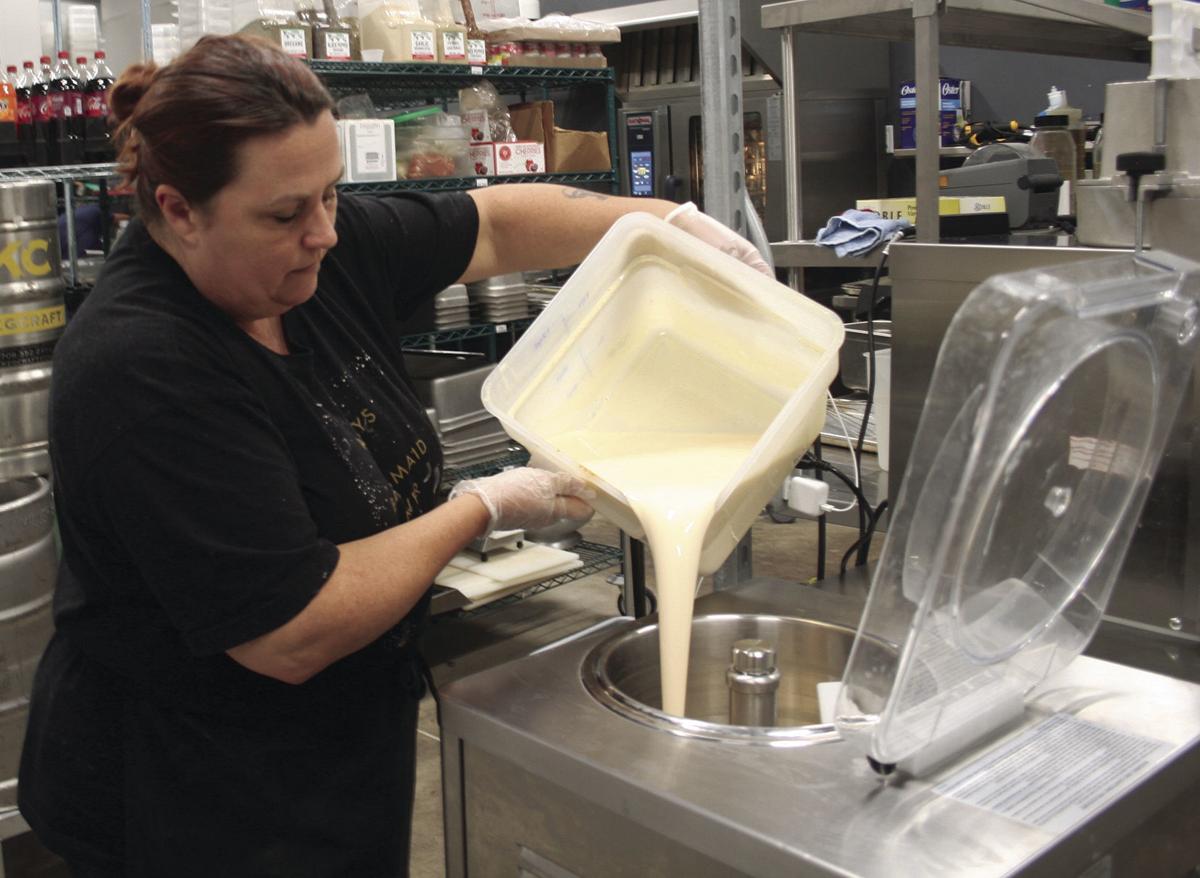 Staci Fritz pours the base of pumpkin pie ice cream into the batch freezer. In nine minutes, the machine will dispense ice cream she will later mix frozen whipped cream and graham cracker pieces into.

Staci Fritz collects pumpkin pie ice cream as it comes out of the batch freezer.

Staci Fritz pours the base of pumpkin pie ice cream into the batch freezer. In nine minutes, the machine will dispense ice cream she will later mix frozen whipped cream and graham cracker pieces into.

With flavors like spicy peanut butter, Mexican hot chocolate, sweet corn and Kringle cream, the next flavor coming from the mind of kitchen rule-breaker and Calliope Ice Cream owner Staci Fritz is always a not-too-sweet surprise.

Formerly sold by the pint, ice cream lovers can try the newest flavor combination from Calliope Ice Cream from the scoop shop at Ian’s Pizza in the newly opened Garver Feed Mill in Madison.

Other businesses in the collaborative, including a yoga studio, kombucha brewer, coffee shop and butcher, staggered their first days until each was ready for business during the open house.

Before the grand opening, Ian’s Pizza first opened its doors in July.

In the first three hours, they sold $3,000 worth of pizza. With no one expecting that number of sales, Ian’s Pizza and Calliope Ice Cream scoop shop closed down for a week.

Luckily for ice cream lovers, the restaurant and shop will be open seven days a week as of Monday, Nov. 25.

Fritz started working at Ian’s Pizza 13 years ago. When the business moved to a different location in early 2012, they learned they would be getting a freezer. She set out to find who was selling ice cream at the Weary Traveler and set up a meeting with him.

“I was used to selling the idea of something that was delicious but unexpected,” she said.

Before running the business as a pair, plans for the Garver Feed Mill began in 2014 with multiple plans and ideas from Madison businesses and politicians.

When the multiyear project was completed, Fritz had one week to move in, learn how to work the batch freezer and come up with four flavors for opening day.

Not only did she come up with four flavors but created five.

The original recipes he created intrigued her, and with an on-site batch freezer at the Garver Feed Mill location, Fritz is now to free to experiment with her own concoctions.

“There’s just a big world of food out there, and it’s amazing how much of it works with ice cream,” she said.

Ian’s Pizza in the Garver Feed Mill is the only location ice cream lovers can get Calliope Ice Cream by the scoop and for now, Fritz plans to keep it that way.

“If you want jalapeno cornbread or fruitcake or whatever goofy thing I’m making that week, you’re just going to have to come to Garver Feed Mill,” she said.

She does not see herself managing her own scoop shop and would rather see people try new flavors.

“It’s been seven years in business, and it wasn’t until this summer that we had this space,” she said. “It’s just been me carrying my pints around Madison on nights and weekends, you know, doing my side gig. You have to have a ridiculous belief in yourself or your product, probably both.”

She still holds demonstrations at grocery stores that sell her pints and encourages customers to try something new.

“It is having people having people try the ice cream and having them be so surprised and say things like, ‘This is the best ice cream I’ve ever had,’ and that keeps me going,” she said.