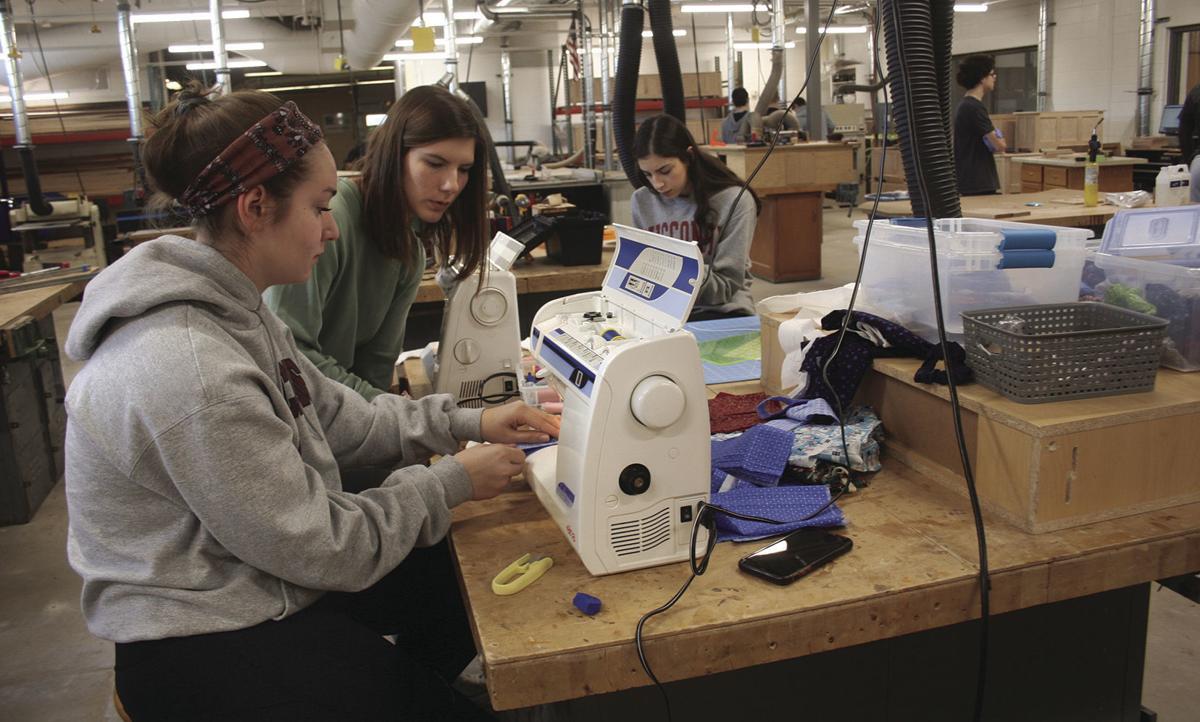 Sewing scrunchies to sell on the Spartan Manufacturing website are, from left, Rosalyn Phetteplace, Bella Dettmers and Lydia Pongratz. 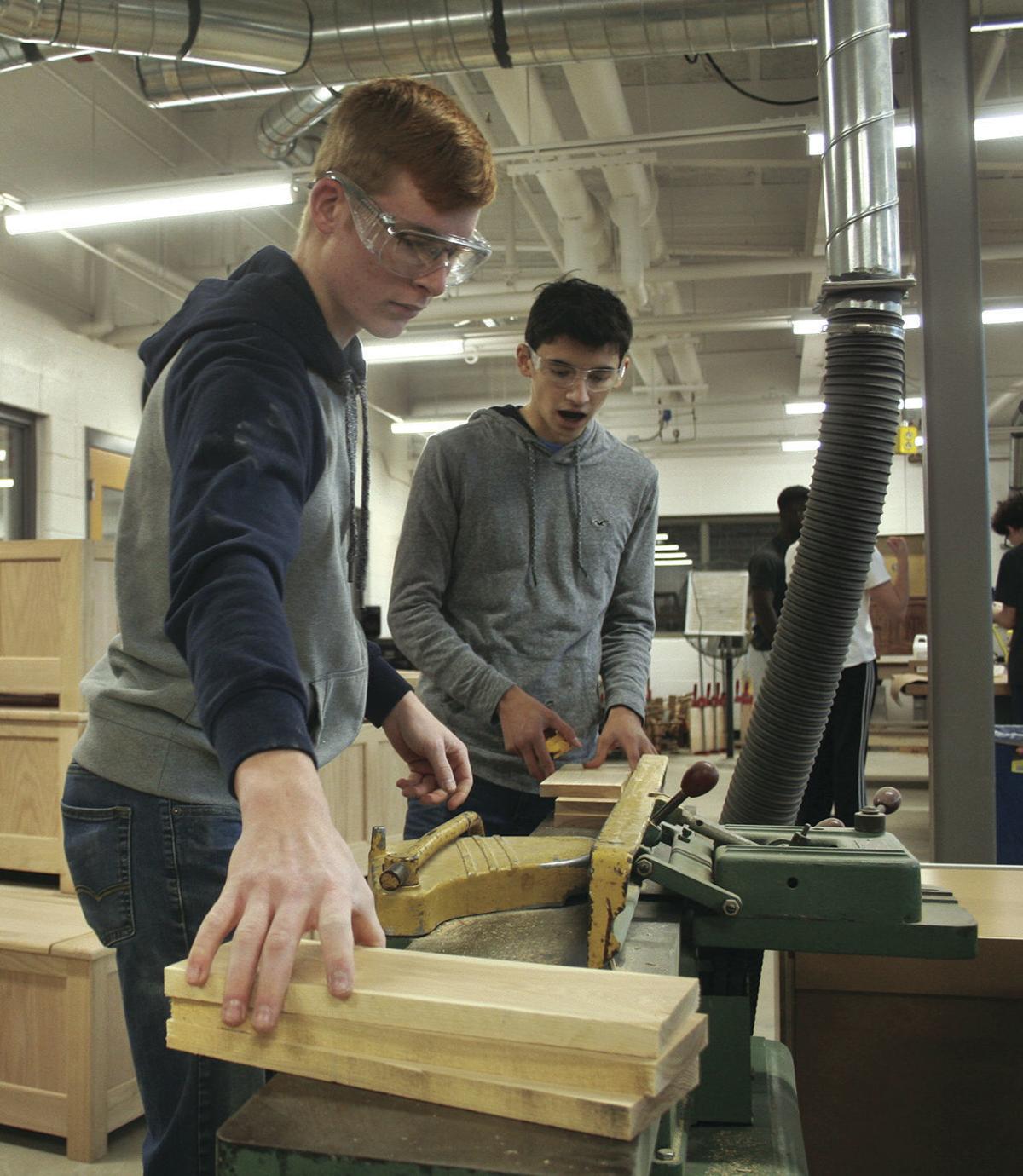 Roman Andrew, left, reaches for a piece of wood to create a cutting board as Zach Augustine stacks up finished pieces. The cutting boards quickly became the capstone’s most popular item and come in two designs paying homage to Wisconsin and the Madison chain of lakes. 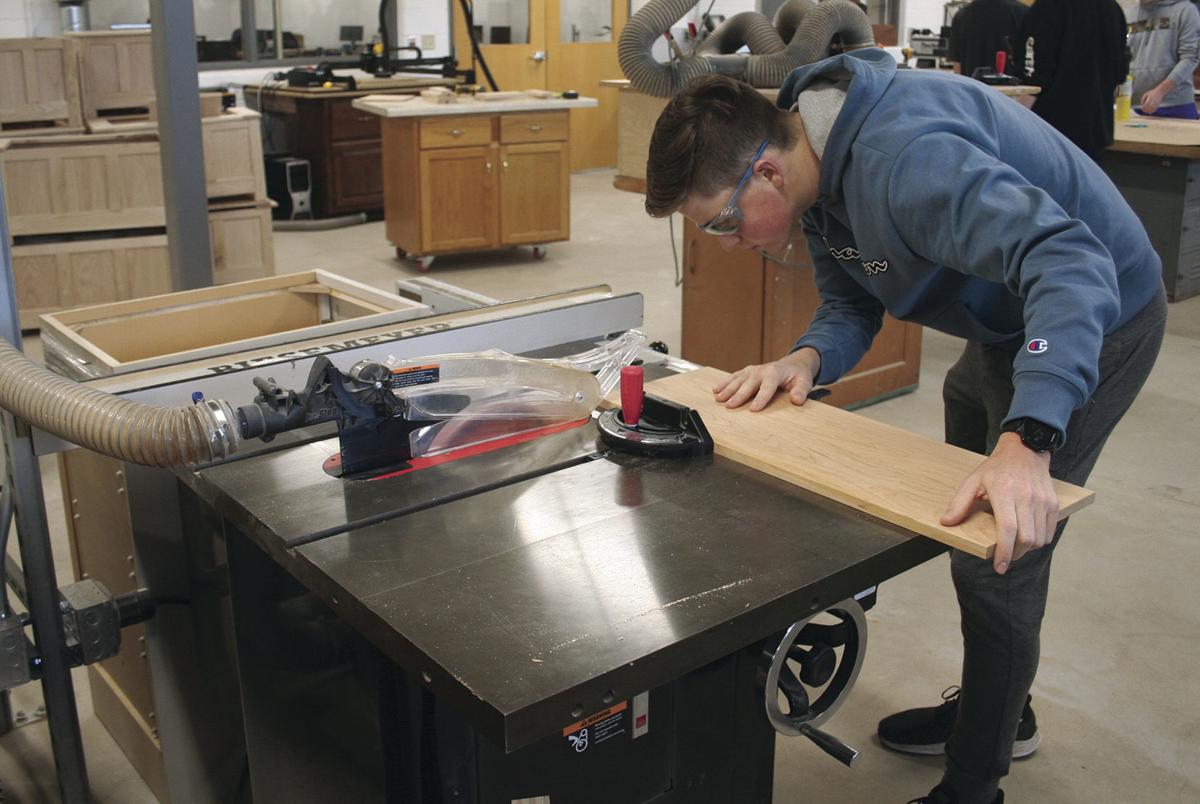 Sewing scrunchies to sell on the Spartan Manufacturing website are, from left, Rosalyn Phetteplace, Bella Dettmers and Lydia Pongratz.

Roman Andrew, left, reaches for a piece of wood to create a cutting board as Zach Augustine stacks up finished pieces. The cutting boards quickly became the capstone’s most popular item and come in two designs paying homage to Wisconsin and the Madison chain of lakes.

After a one-year hiatus, Spartan Manufacturing is back with brand new products and brand new insight from its second group of students.

Keychains and the website are the only repeats from the class’s first year in 2017. Cutting boards and cribbage boards are back with fresh designs. Products like scrunchies, snowmen ornaments and koozies are new this year.

“Projects are always interesting. You never know what you’re going to get, because it all depends on what the new round of kids bring in as interests,” career and technical education teacher Travis Ray said.

He describes the course as a “true capstone,” because students come in with the skills and teachers provide them an opportunity to use them.

“With it being a capstone class, we wanted to bring juniors and seniors together again to give it another run. We really do believe that this is one of the more dynamic classes that brings all departments together,” career and technical education teacher Steve Pennekamp said.

“We are a high school company, but we want to make sure people believe that we’re a real company, because we do make real products for real people and it’s real money,” student Callie Korth said.

Class instructors prefer to keep the number of students around 40 for enough group and company support. The class disbanded for one year after fewer than 30 students signed up last year.

Now, instructors feel the class is here to stay with higher sales and student interest.

“It’s pretty free range, and it honestly takes a lot of people who don’t engage well in a traditional classroom and provides them with an educational system to learn and be engaged,” student Matthew Klumpyan said.

He manages a subsection of the group that creates cutting boards.

After taking nearly all the business classes the school has to offer, Klumpyan wanted to see how these concepts would play out in a real-life scenario.

Students scoured Pinterest and Etsy for ideas at the beginning of the school year. They designed and tested products.

As students experiment with ideas, they find some work better than others.

“It’s interesting as a teacher because you want to stop the train wreck, but you can’t because it’s the same train wreck you saw the year before,” Ray said. “It’s a totally new group of kids, so you have to let them go down that path. They get right to the edge and they’re leaning over and just before they’re ready to fall, you grab them by the collar and pull them back and say, ‘OK, this would have happened,’ but they have to get to it and that’s the interesting part.”

He added that getting to the “edge” is not always a bad experience.

“You let them go up to that edge and it turns out it’s really going to work and you let them take that step and they get to see all the glory,” he said.

Initially, the cutting board group tried to make custom playing cards but found out they would need a $10,000 machine and had to scrap that idea.

A group member came up with the idea to use epoxy river table, but the project would also be expensive, so they settled on cutting boards, which allows them to learn to use a CNC router.

Group members learned how to use the program, sketch the outline and carve the design into wood. The design is filled with epoxy, oiled and sanded down to create a functional and fashionable project.

The cutting boards, which come in Wisconsin and Madison chain of lakes designs, are the best-selling product.

“We’ve been selling really fast, and it’s been kind of hard to keep up with the demand for it,” Klumpyan said. “We’ve gone out of stock almost three separate times now, so we’ve been able to make about eight to 10 boards a day.”

Students find a fit in areas other than production. An interest in graphic design guided Korth to the marketing side of the class.

“It’s just like where your niche is,” she said. “It’s very much just float where you feel like you would best be applicable to what you’re going to make.”

“Each of these groups has a personal buy-in to what they’re making as a personal appreciation for what it’s taken to get their product to market because it started with nothing,” Pennekamp said.

As products are sold, students step into different roles, changing focuses and helping other groups.

Products can be purchased at spartan.market.