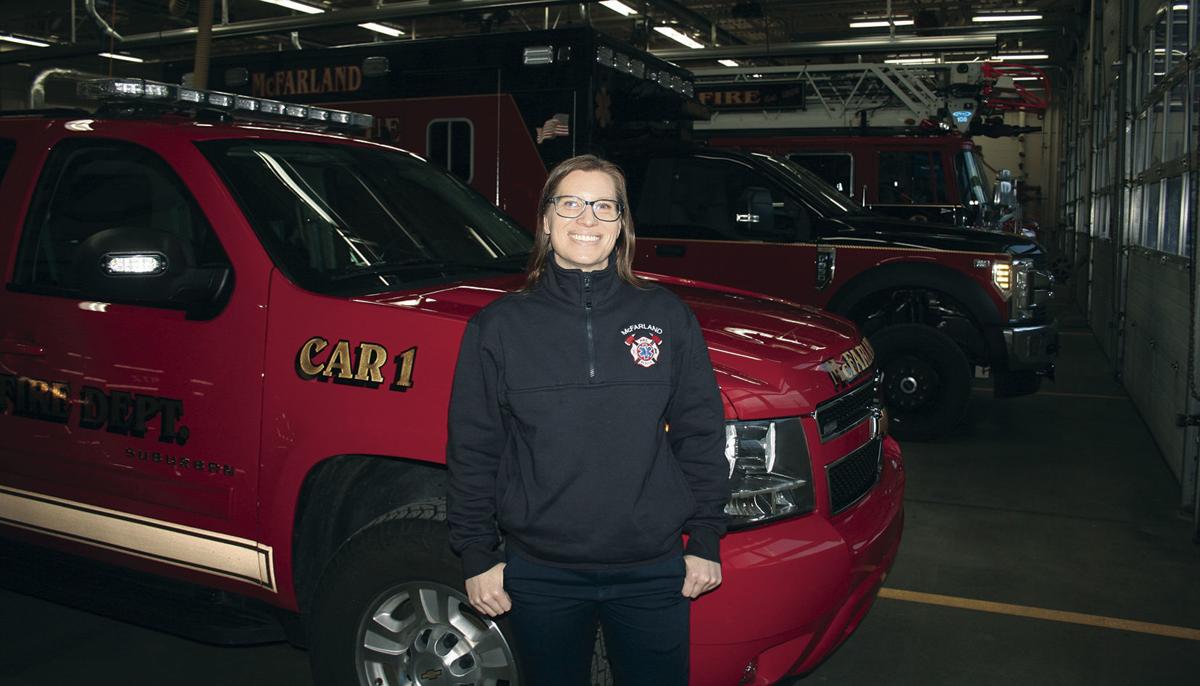 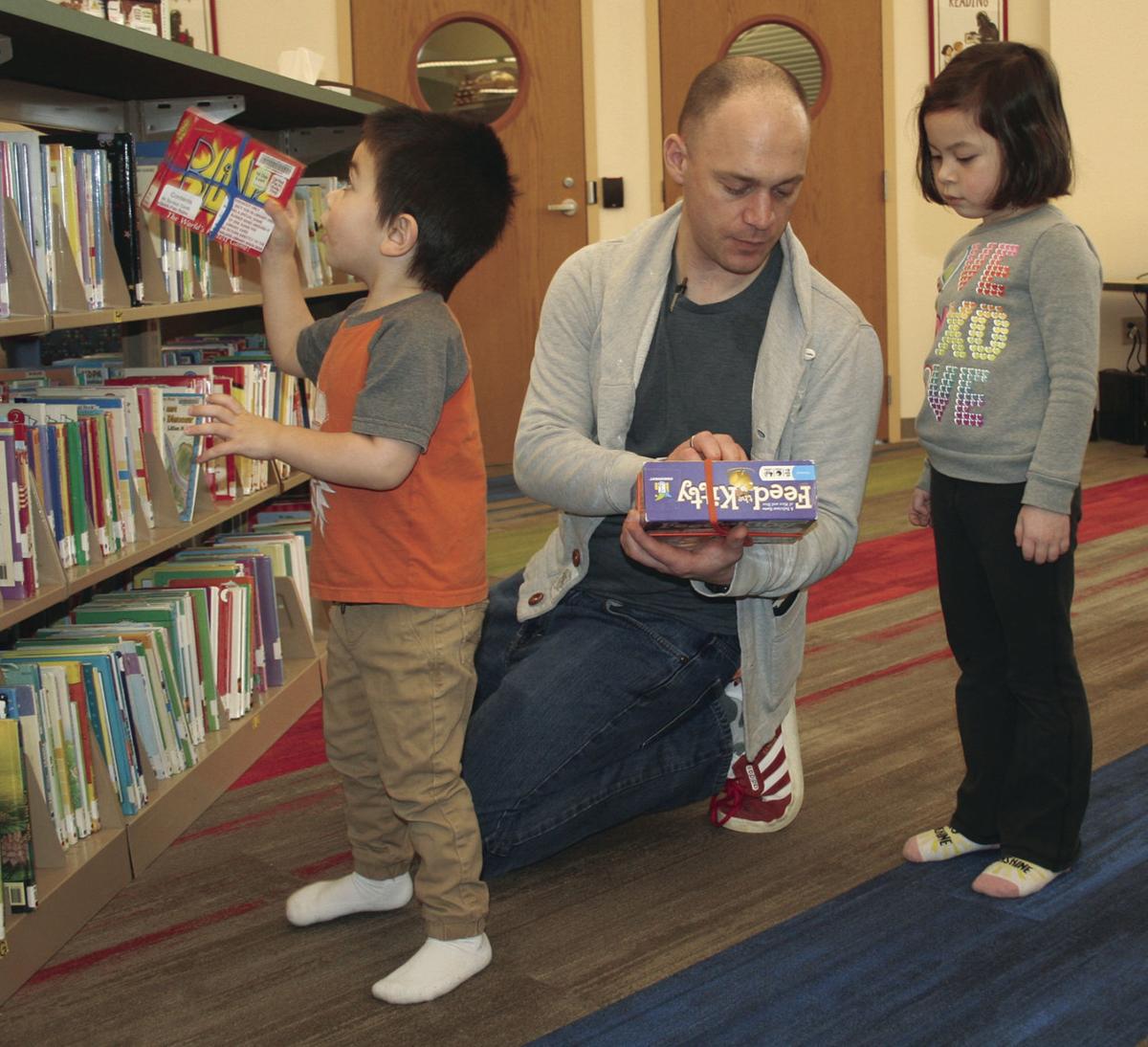 Nathan Horne, center, picks out a game with his son Jack Horne, left, and daughter Macrina Horne. Nathan Horne is a stay-at-home dad and volunteer firefighter with McFarland Fire and Rescue. He plans to answer late night calls others may not be able to get to. 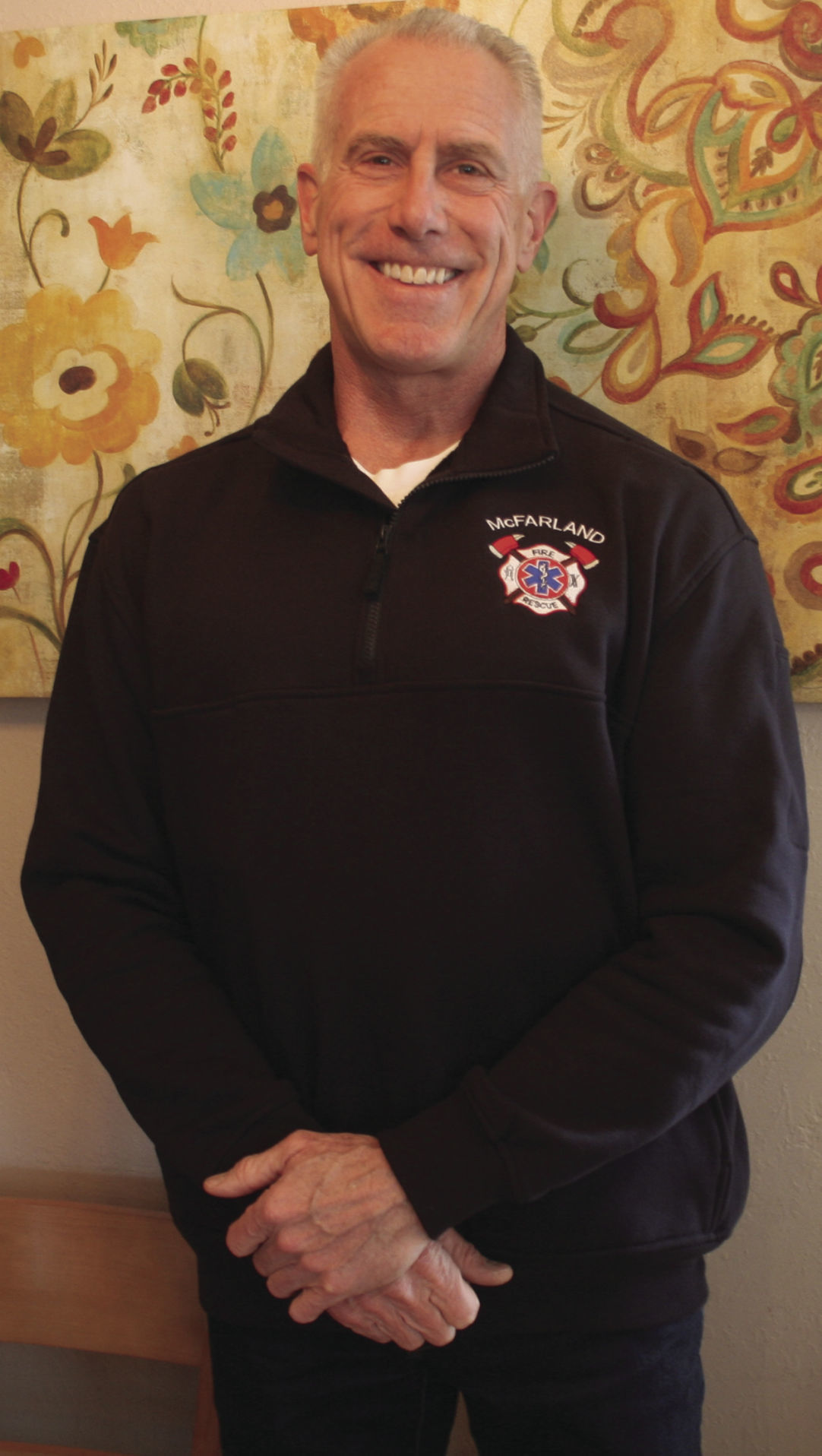 Volunteer firefighter Scott DeMario sports his McFarland Fire and Rescue quarter-zip. He has been volunteering for 30 years and stays physically active.

Nathan Horne, center, picks out a game with his son Jack Horne, left, and daughter Macrina Horne. Nathan Horne is a stay-at-home dad and volunteer firefighter with McFarland Fire and Rescue. He plans to answer late night calls others may not be able to get to.

Volunteer firefighter Scott DeMario sports his McFarland Fire and Rescue quarter-zip. He has been volunteering for 30 years and stays physically active.

Chief Chris Dennis said night calls can be wearing on individuals with full-time jobs when the same volunteers need to respond night after night.

“The ones that I feel like I can help out a lot are the midnight calls,” he said. “Somebody who has to get up and go to work the next day might not be able to respond to that call, but since I’ve got an easy-going schedule, that’s going to be an area where I can be an asset to the department.”

After moving to McFarland from Sacramento, Horne is a stay-at-home dad to his three children. He explains his day-to-day life involves making lunches, folding clothes and keeping the house clean – a substantial difference from firefighting.

“I’ve lived in some towns in the past, and I’ve just lived there,” Horne said. “I really don’t want that to be the case with McFarland. The community’s got a lot going on, a lot to offer, and we really want to be part of it.”

His father was a volunteer firefighter in New Richmond, where Horne grew up.

Horne is also an Air Force veteran, working as an airborne linguist to listen to Taliban communications, translate in real time and write summaries to pass off to units on the ground.

“Since I’ve separated, I’ve really wanted to be a part of something bigger than myself that really matters, and I haven’t really found that since leaving the Air Force,” Horne said. “The fire department, not to compare it too much to military service, I think that’s going to suite the bill.”

He describes the training as a blend of fun and serious.

“Our instructors, they remind us a lot that it’s not just a coat. It’s not just a big tank of air on your back. It’s all got a very serious purpose. It’s enjoyable, but it’s also kind of sobering,” Horne said.

While the majority of calls are not life-threatening situations, Horne said firefighters want to be ready when the time comes.

“Everybody that I’ve spoken to, they all said that they joined for the same reason. It’s all about serving the community, and that really struck me because everybody has said that,” Horne said.

Scott DeMario is familiar with serving the community after being a volunteer at various organizations for 30 years.

The physically active volunteer is eager to respond to his first calls.

“This whole aspect of actively volunteering to this level is really motivational for me,” he said. “I can’t wait.”

DeMario works in human resources at CUNA Mutual Group, a company with a volunteer program. His wife saw an ad on the internet to become a volunteer.

“It immediately felt like a great fit,” he said.

DeMario’s younger brother has been on the Charleston Fire Department for more than 20 years. DeMario tells him about training, such as putting on the gear and knowing when to snap buttons and pull together clasps.

Volunteers are currently getting used to the volume of calls by receiving texts during all times of the day and night.

“We’re all excited and can’t wait to start contributing, because we all see the need in the number of calls,” DeMario said.

DeMario also appreciates the sense of camaraderie within the department.

“In that type of environment, trust is everything. You’re trusting these people with your life,” he said.

April Suminski has also found a similar sense of camaraderie, being intentional in speaking with fellow recruits in class and veteran members at department dinners.

In the fall, Suminski got out of her car to take a picture of a recruitment sign along Holscher Road. A group of people were standing in a driveway and talked with Suminski about joining.

“It always makes me laugh how everything comes full circle all the time when you talk to people,” she said.

Suminski attended CampHERO in late October, a camp for women and girls interested in becoming a firefighter, paramedic or police officer.

She learned to gear up, climb ladders, crawl through windows and break down doors.

“As they say, I caught the bug, and I just loved every second of it,” Suminski said.

“It’s important, because you’re always working with people or a structure that you could come in contact with and you need to know how to handle those situations,” Suminski said. “There’s a lot more training that goes into it, but if you’re really passionate about it, you look forward to getting it all completed.”

When meetings wrap up, Suminski practices Latin dance and soccer, skills that require a similar passion and uniform vision.

Suminski hopes to pass down knowledge to future recruits.

“I’m going to take everything as it comes and try to be as well-rounded as I can and then continue to achieve,” Suminski said. “Once I get to a certain level, it’ll be nice to give back and be one of the ones who gives the new person the tips and tricks.”