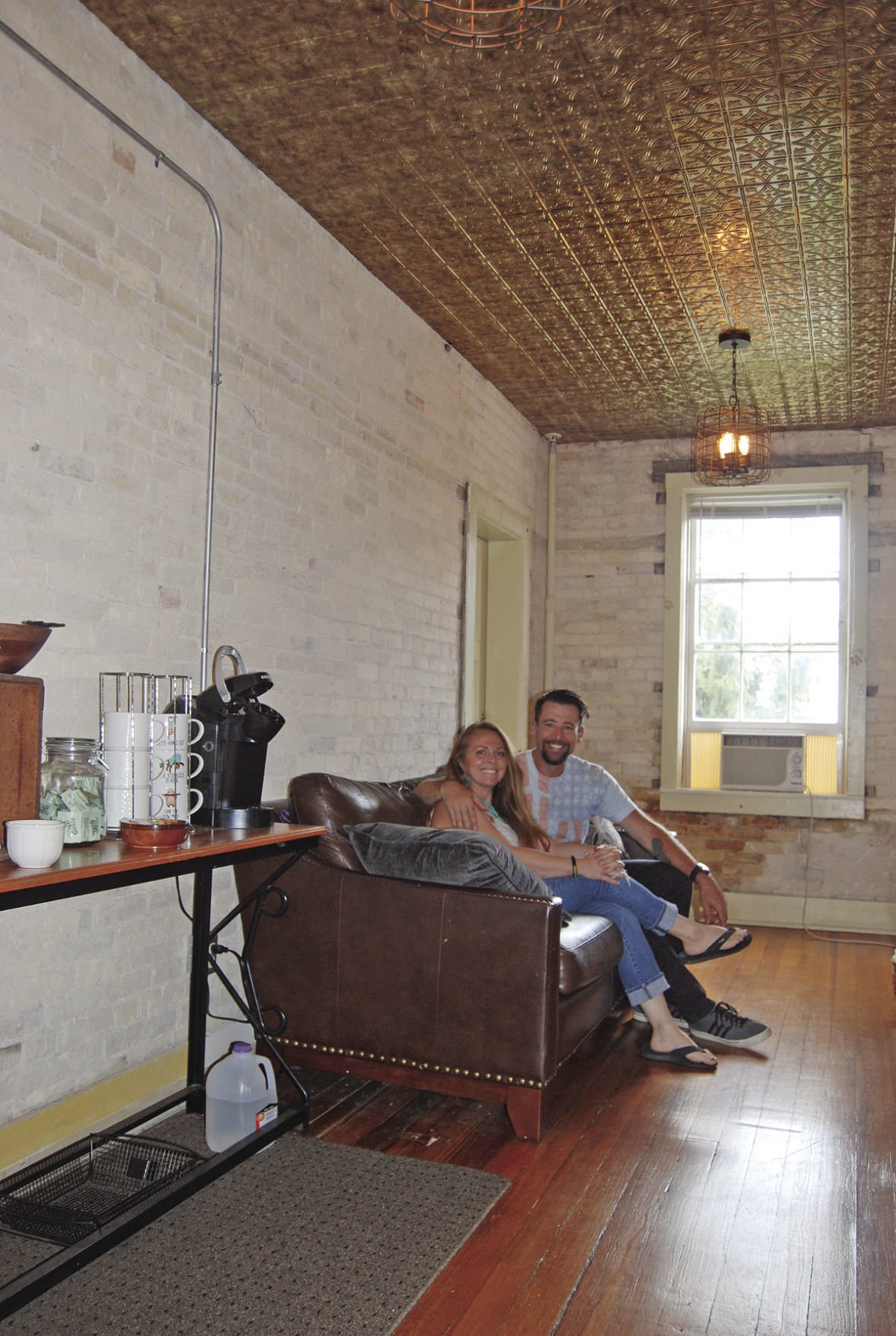 Goodrich Hall owners April and Nick Yohanek sit in the hallway of the building’s second floor which they have recently opened as an Airbnb. Updates within the space include a newly remodeled bathroom, exposed cream brick walls and tin ceilings. 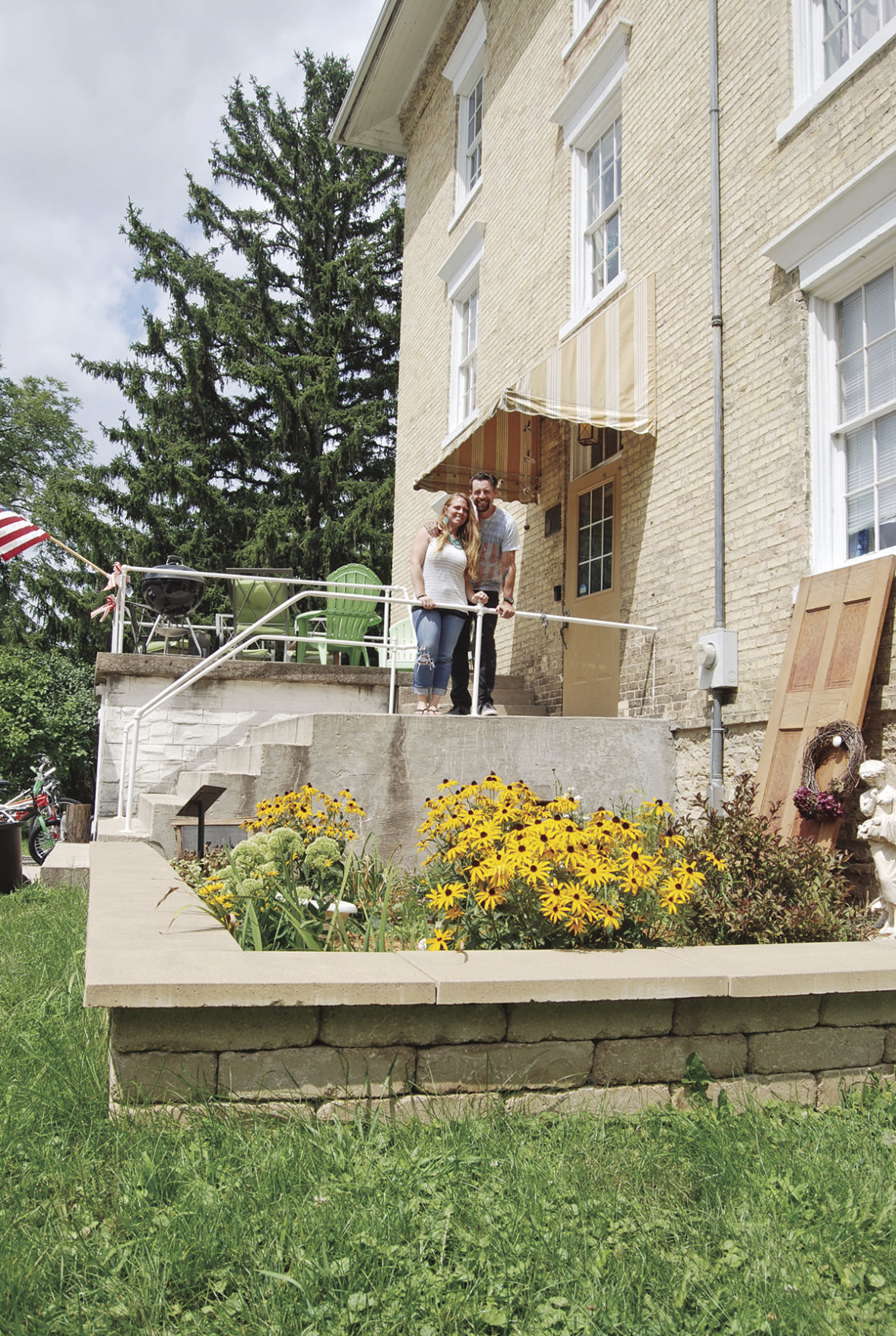 April and Nick Yohanek enjoy the view from the back door of Goodrich Hall. The historical building was built in 1857 as part of the former Milton College. The couple purchased the building last September. 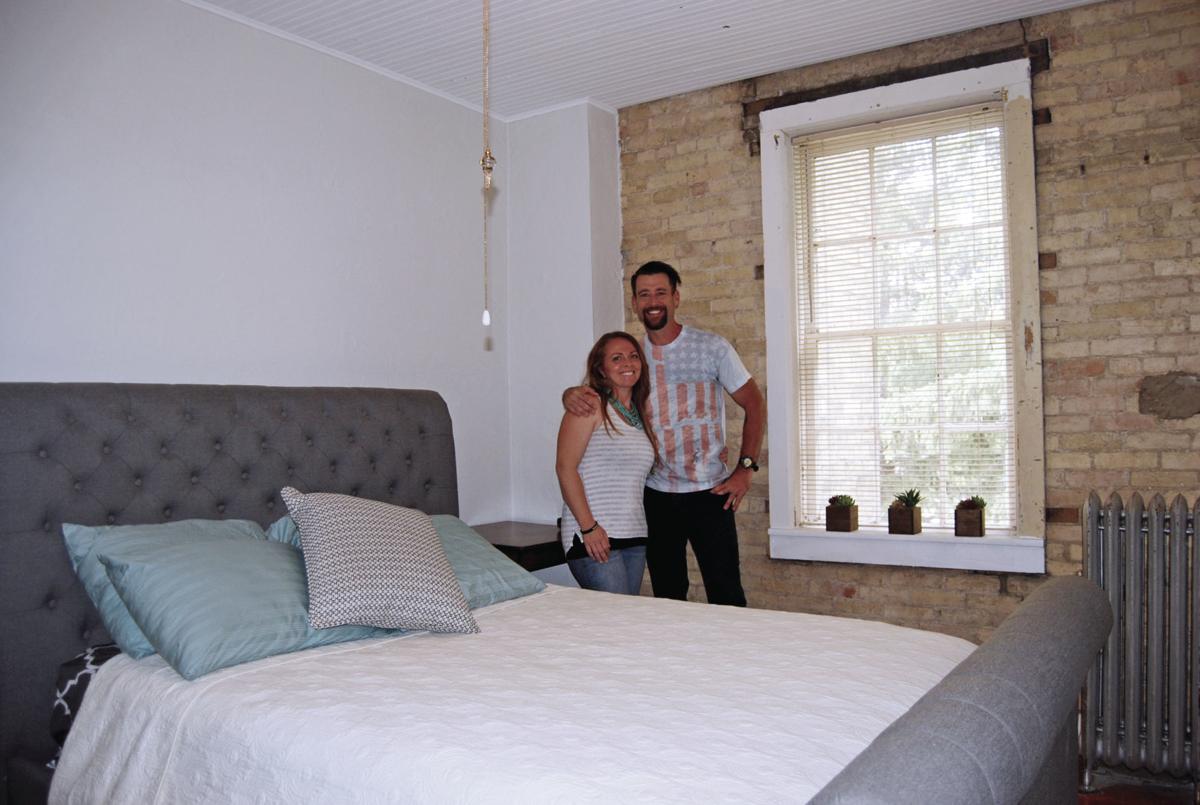 April and Nick Yohanek invite guests to stay in this room on the second floor of their 1857-built three-story cream brick home. The building once served as a dormitory for the former Milton College. 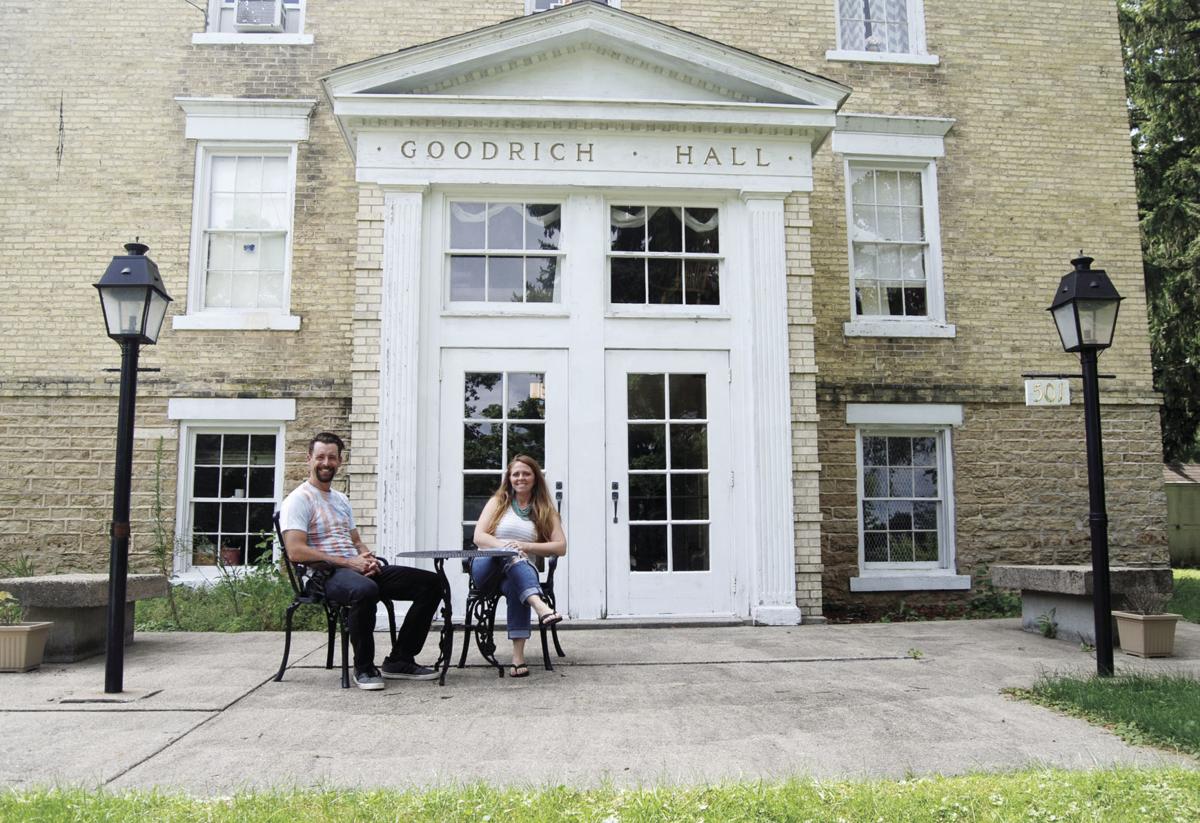 Nick and April Yohanek say people visiting the Milton College Historic District sometimes move these chairs on their front porch, using them as props while they take family photos. The couple said they see themselves as caretakers of the building they see as a community treasure.

Goodrich Hall owners April and Nick Yohanek sit in the hallway of the building’s second floor which they have recently opened as an Airbnb. Updates within the space include a newly remodeled bathroom, exposed cream brick walls and tin ceilings.

April and Nick Yohanek enjoy the view from the back door of Goodrich Hall. The historical building was built in 1857 as part of the former Milton College. The couple purchased the building last September.

April and Nick Yohanek invite guests to stay in this room on the second floor of their 1857-built three-story cream brick home. The building once served as a dormitory for the former Milton College.

Nick and April Yohanek say people visiting the Milton College Historic District sometimes move these chairs on their front porch, using them as props while they take family photos. The couple said they see themselves as caretakers of the building they see as a community treasure.

April and Nick Yohanek knew they had found home the moment they walked through the door of Goodrich Hall, 501 College Street, April said.

The family, including three children, 13, 10, and 9, had outgrown their 1,600-square-foot Whitewater home, Nick said.

The couple talked about building something more suitable, more durable, Nick said, describing his children’s interest in sports, which sometimes, by way of misplaced balls, caused accidental wear and tear.

“We had holes in the plaster,” Nick said.

Upon inspection of the 8,000-square-foot, three-story, cream brick building, Nick saw a home that could contain and accommodate his kids’ enthusiasm, he said.

The family moved into the building last September.

Built in 1857, Goodrich Hall has a rich history: it was a dormitory used by the former Milton College, which was founded in 1844 by pioneers, including Milton’s founder, Joseph Goodrich, and other early members of the Seventh Day Baptist Church, and closed under financial duress in 1982. Goodrich Hall was the second building constructed on what would become the sprawling downtown campus. The first was Main Hall, built in 1855 and used as a classroom building. It resides next door and is today used as a museum. Both buildings, along with four others from Milton College, are within the Milton College Historic District, formed in 1980.

Multiple years and owners later, Joe and Terry Williamson gave the building a second life as an antique shop. In recent years, the couple placed the building on the market and moved to a new location, Goodrich House, the former home of Ezra Goodrich, son of Joseph, located near the iconic Milton House Museum, another structure built by the Goodrich family, serving initially as an inn.

“Milton House is best known as being the only authentic Underground Railroad site in Wisconsin that can be toured,” said Milton House Assitant Director Doug Welch.

Goodrich House serves the Williamsons as their home and an antique shop.

April and Nick recalled their introduction to the Goodrich Hall property as an antique shop. Two floors teemed with items for sale, and a third floor had been remodeled into a residence. Nick focused on a brick wall in the residence, wondering if the brick remained throughout the building behind the plaster walls. He learned that it did, he said, and exposing it on the second floor became his first project, he said.

With so much to move, the couple offered the Williamsons extended transition time. For a month, the couple said, they lived in the building while customers still frequented the store.

“People still are not sure what the building is,” Nick said.

Some think it is a public building. Outdoor furniture in the front of the building is sometimes moved as people come by and photograph themselves or family members, he added.

People would just walk in, April said, and while a video doorbell has been installed to help monitor curiosity, the couple said they came to realize that the building was a community treasure, and they were caretakers. They wanted the community to enjoy the space and feel welcomed.

“It was a dorm, so I thought it needed to be filled with people,” April said.

Upon introduction to the building, a bed and breakfast entered her thoughts, she said.

“At the time, we had never stayed in an Airbnb. We had no experience, but we tell our kids to go out and do stuff; don’t be afraid. So we had to live that example,” she said.

Along with exposing brick on the second floor, April and Nick have built three rooms for guests. Two more are under construction, Nick said. Ultimately, there will be five guest areas to rent: three single rooms and two suites, which include a separate sitting area. The floor shares a large remodeled bathroom. The single rooms are 12- by 12-feet and the suites are 12- by 24-feet, Nick said.

April noted her affection for Milwaukee’s old factories many of which have been converted into apartments. It was a motif she thought could be borrowed while making the second floor guest space, she said.

Kinn Guesthouse in downtown Milwaukee has served as a model for what they would like their space to look like, April said.

Further plans call for a gathering area and kitchen, with a large meeting room and gallery on the first floor.

“Nick hopes to begin work on the first floor this year. The gallery will have a sports and political theme,” April said.

Nick collects sports memorabilia and items associated with past presidents, she said.

Both Wisconsin natives: April is from Milwaukee and Nick is from Green Bay, the couple met at UW-Milwaukee and graduated with undergraduate degrees shortly thereafter, Nick in 2001 with a criminal justice degree and April in 2002 with a degree in graphic design.

Married in 2004, the couple moved to West Allis, purchased a home, and began a family. Nick served as a Milwaukee County sheriff’s deputy and April worked in a corporate setting, although, she admitted, she had an entrepreneurial heart: she sold skincare products from home while the children were young. She also began working as a paraprofessional with special education students.

Seven years later, the family moved to Whitewater, after Nick was transferred to the Walworth County Sheriff’s Department. He has served in that capacity for six years.

April, too, has made a career move: she works at Milton West Elementary School in the early childhood development department. This is her second year.

“I think a lot of people want the typical place that’s easy. And so did we. Everybody has good ideas, but it is not always easy to bring those ideas into reality, and putting that money down and taking the risk,” Nick said.

“Lots of people walked through and wanted to buy it, but they thought about it too much. We didn’t focus on what could go wrong, we didn’t take that approach,” said April

Overthinking, she said, kept others from taking the next step, and while the project is big, and may keep them busy for the next 20 years, the couple said they have the energy and desire to make things work, “one room at a time.”

“When people hear about this project, they say: ‘oh, you got a lot of work,’” Nick said.

“I want to put a book together with updated history,” said April.

Said Nick: “The history gives an overview about how important the college and this building was to the community. People want to stay connected. They know it was a dorm and they know how old it is.

April and Nick opened the home as an Airbnb and booked their first guests over the Memorial Day weekend, April said. It was a family reunion, she added.

Since then, rooms have been booked, from June to July, 52 out of 60 nights, April said.

When the couple first opened, they worried because they did not offer their guests in-house options for meals, they said.

“That turned out to be a good thing: we send our guests to places in town, and they always come back and tell us they had a good experience,” said April.

While most of their guests have come from other states and countries, the couple said, plans are being made to create local packages with area wineries and other events. Situated equidistantly between Parkview Drive and Merchant Row, Milton’s two downtowns, a day of shopping and dining is easily complemented by an evening of entertainment, followed by an overnight stay in a unique and historical building.

Those interested in booking a room should make plans at least two weeks in advance, April said.

Rooms can be booked for $85 a night, with a $15 charge for additional guests over four.

For more information, visit Goodrich Hall Adventures on Facebook, or find the venue on Airbnb: www.airbnb.com.rooms/35131146?location=Milton%20Wis&adults=1&source_impression_id=p3_1566067083_bkFqTTK%2FhR0xR83e&s=n3di_oWD.