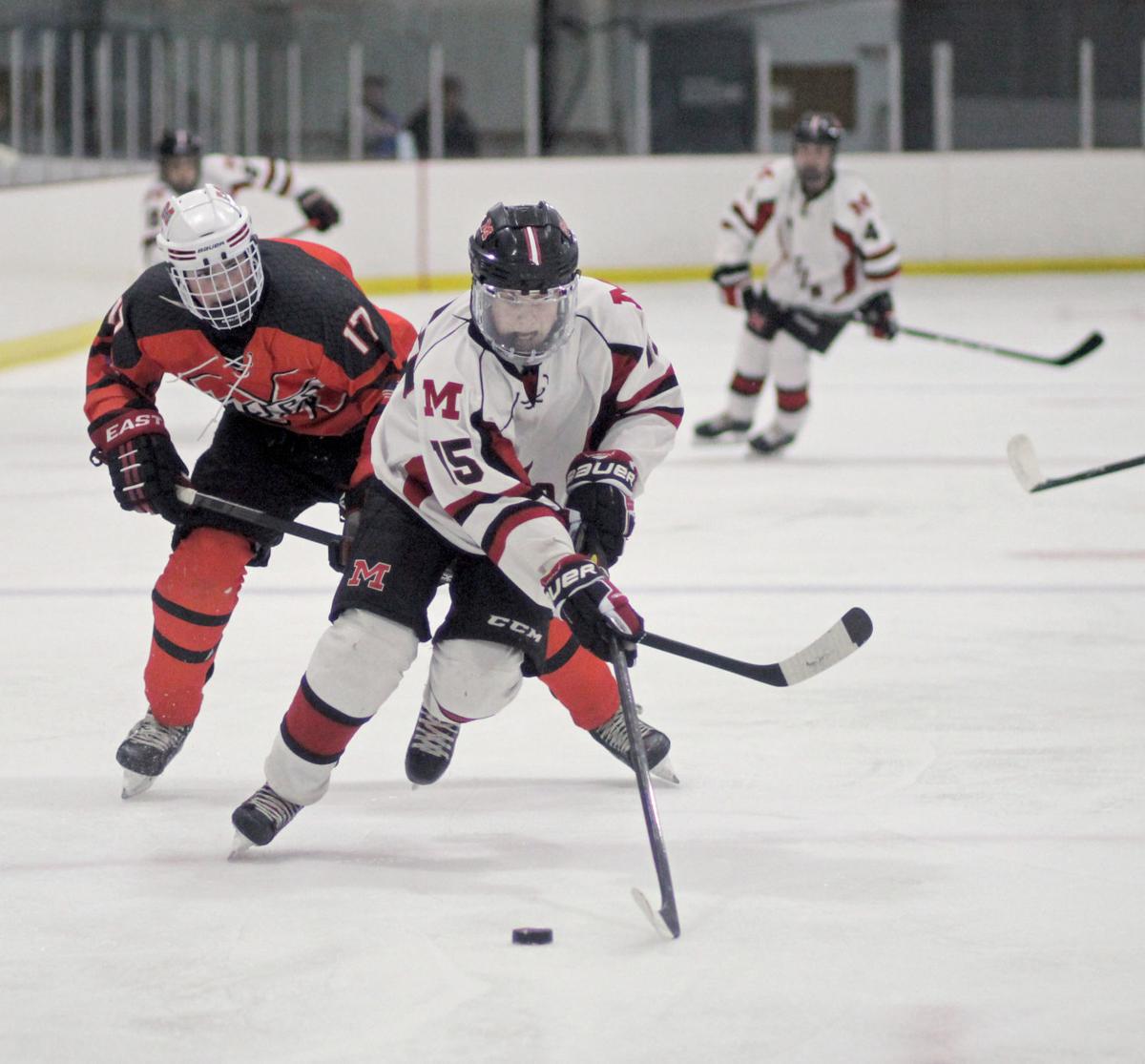 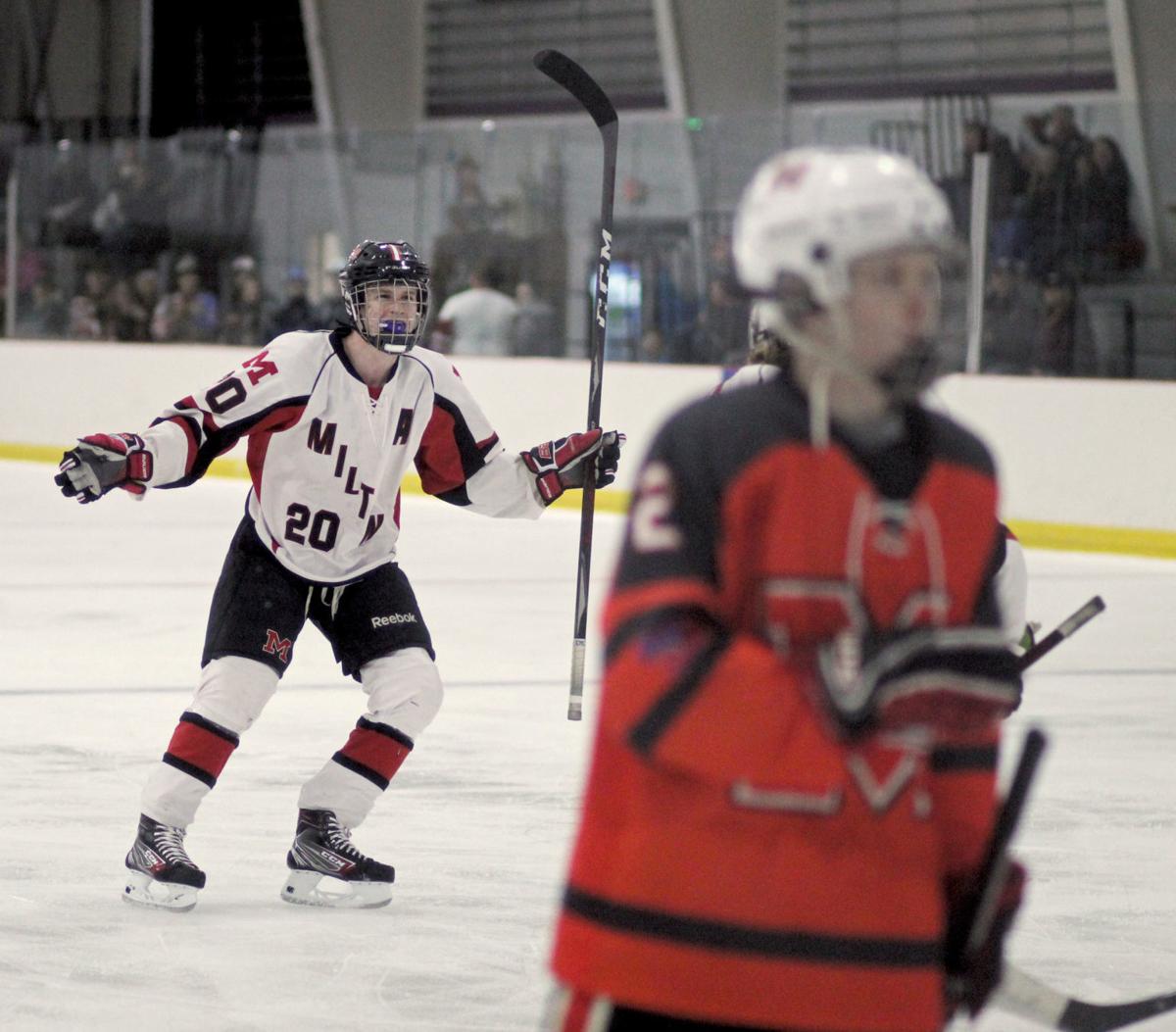 Senior Jakob Snow celebrates a goal in the first period of Milton’s 5-2 defeat to Monroe Friday, Jan. 3, at the Mandt Center in Stoughton.

Senior Jakob Snow celebrates a goal in the first period of Milton’s 5-2 defeat to Monroe Friday, Jan. 3, at the Mandt Center in Stoughton.

The Milton boys hockey team showed its ability to hang with one of the Badger South’s best Friday.

Milton and Monroe went into the final period knotted at 2-2, but three Cheesemaker goals in the final period propelled Monroe to a 5-2 victory over Milton in a conference game Friday, Jan. 3, at the Mandt Center in Stoughton.

The Cheesemakers moved to 11-1 on the season with the win and stayed undefeated in conference play (3-0). Despite the effort, Red Hawks dropped to 1-10 on the season and 0-5 in the Badger South standings.

“Monroe is having a great season, but it didn’t surprise me that we were able to skate with them,” Milton head coach Steve Zartman said. “When this group buckles down they can hang with anybody.”

Monroe took a 1-0 lead 4 minutes, 54 seconds into the game with a goal from junior Hayden Roth.

Less than six minutes later, Milton equalized with a score from senior Jakob Snow. The goal was assisted by sophomore Gannon Kligora and junior Mason Pusateri.

It looked like the Cheesemakers would go into the second period up 2-1 after a goal with less than two minutes to play in the first, but the Red Hawks once again equalized. This time it was junior Tyler Gilbertson, who scored with six seconds left in the period. Sophomore Mitchell Masters and junior Austin Sartell were credited with assists.

“We got the puck to the net and had guys crashing in to clean up. On that first goal we found Jakob out at the point and he just wristed it on net,” Zartman said. “Mason provided a little traffic and it just found its way through. Good things happen when we get the puck to the net. That second goal with six seconds left in the first looked like it was really going to get us some momentum heading into the locker room.”

The Milton defense stiffened in the second period, shutting out Monroe for the period, but the Red Hawk offensive couldn’t capitalize with any goals.

“When we play good position and everyone hustles and does their job we are tough to score on,” Zartman said. “Luke (Grote) does a nice job of stopping that first shot and then everyone finds a body and ties up a stick, that’s what you have to do.”

Monroe got going again in the third period with two goals inside under three minutes and added another score three minutes later to put the game away for good.

“We dug ourselves a hole early in the third that was just too big to get out of,” Zartman said. “Give some credit to Monroe, they outworked us for the better part of the third. Our margin for error is so slim right now.

“A let down here or a missed opportunity there has been the difference in these tight games.”