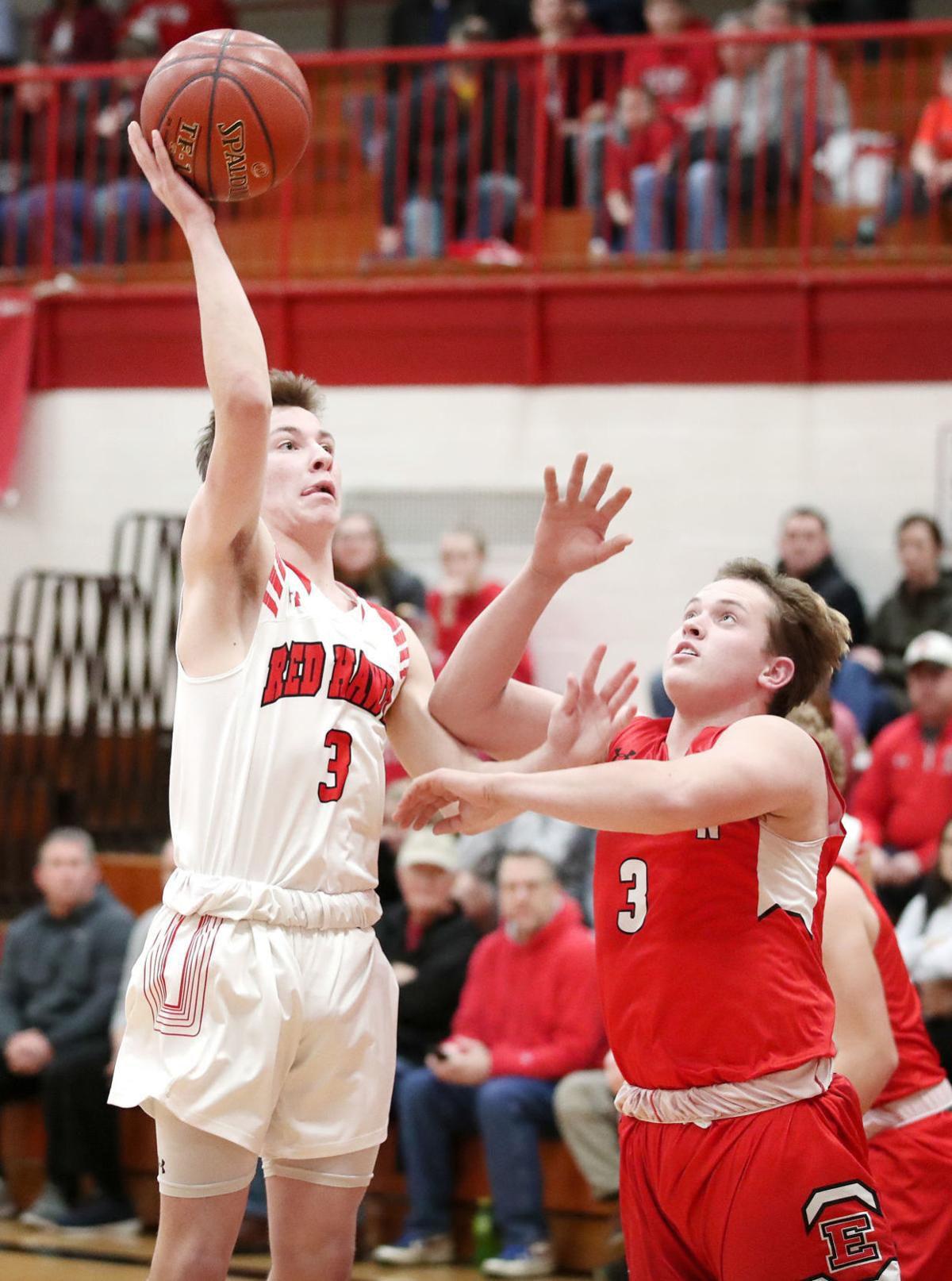 Sophomore guard Jack Campion puts up a floater during the first half of the Red Hawks’ 72-60 defeat versus Edgerton Dec. 9 in Milton. Campion ended with a game-high 26 points. 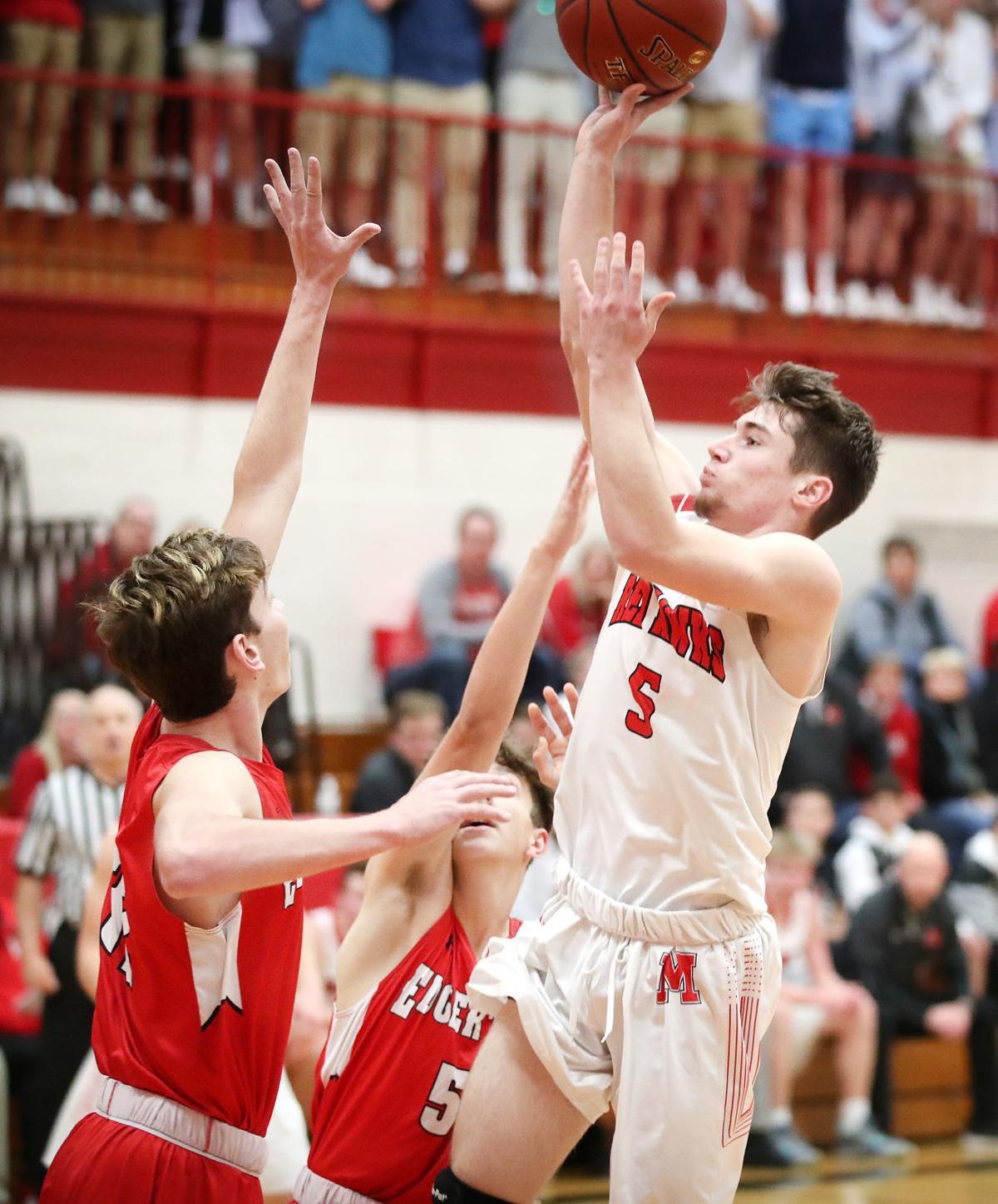 Junior guard Evan Jordahl goes up for a floater during the Red Hawks’ 72-60 defeat against Edgerton Dec. 9 in Milton.

Sophomore guard Jack Campion puts up a floater during the first half of the Red Hawks’ 72-60 defeat versus Edgerton Dec. 9 in Milton. Campion ended with a game-high 26 points.

Junior guard Evan Jordahl goes up for a floater during the Red Hawks’ 72-60 defeat against Edgerton Dec. 9 in Milton.

A couple of strong defensive stretches from Stoughton proved to be the difference in Milton’s conference opener on Saturday.

The Milton boys basketball team was held without a field goal for the first 7 minutes, 45 seconds of the game as the Vikings defeated the Red Hawks, 58-48, in a Badger South Conference opener Saturday, Dec. 7, in Milton.

On Monday, Dec. 9, the Red Hawks were defeated by Edgerton, 72-60, in a non-conference game at Milton High School.

“Stoughton has been a potent defensive team since I’ve been here,” Milton head coach Alex Olson said. “Everything is tougher against them offensively. A struggling start isn’t something we anticipated, but something we talked about. We knew there was going to be a point in the game where for four or five minutes we could be stuck.”

“We didn’t get discouraged, we made our run at the end of the first half,” Olson said.

The Red Hawks’ defense, which allowed just 16 points through the first 13 minutes, was key in the first half as the Milton offense found its footing.

Junior Sam Burdette scored nine of the 17 points during the first-half run, connecting on three 3-pointers.

“Jack’s a total spark plug, that’s why he’s circled on opposing coaches scouting reports every week,” Olson said. “If you relax for a second on him, he’ll take full advantage.”

Campion ended with a team-best 16 points.

But, the Stoughton defense staggered the Milton offense a bit down the home stretch, allowing just six points on two field goals the final 4:41.

“They made the winning plays and we didn’t,” Olson said.

Campion scored a game-high 26 points, but it wasn’t enough to hold off the Tiders.

The sophomore guard scored 12 points in the first half and added 14 after the break. He finished with four made 3-pointers.

Milton trailed 34-25 at half, and Edgerton used a 38-point second half to put the game out of reach for the Red Hawks in the late stages of the second half.

Junior guard Evan Jordahl came off the bench to score 11 points, including seven in the first half.

Campion scored 12 of his team-high 14 points in the first half as the Red Hawks picked up their first win of the season over Portage four days prior to their conference opener versus Oregon.

The Red Hawks separated themselves from the Warriors (0-3) with a 42-24 halftime advantage. Milton continued its efficient offensive play with another 42 points after halftime. Portage was held to just 15 points in the second half.

Jordahl finished with 13 points, all coming in the second half. Burdette and fellow junior Ethan Burrows scored 12 points each in the Red Hawks’ first win of the season.

Milton will take on Oregon in a conference road game Friday, Dec. 13 in Oregon at 7:15 p.m.