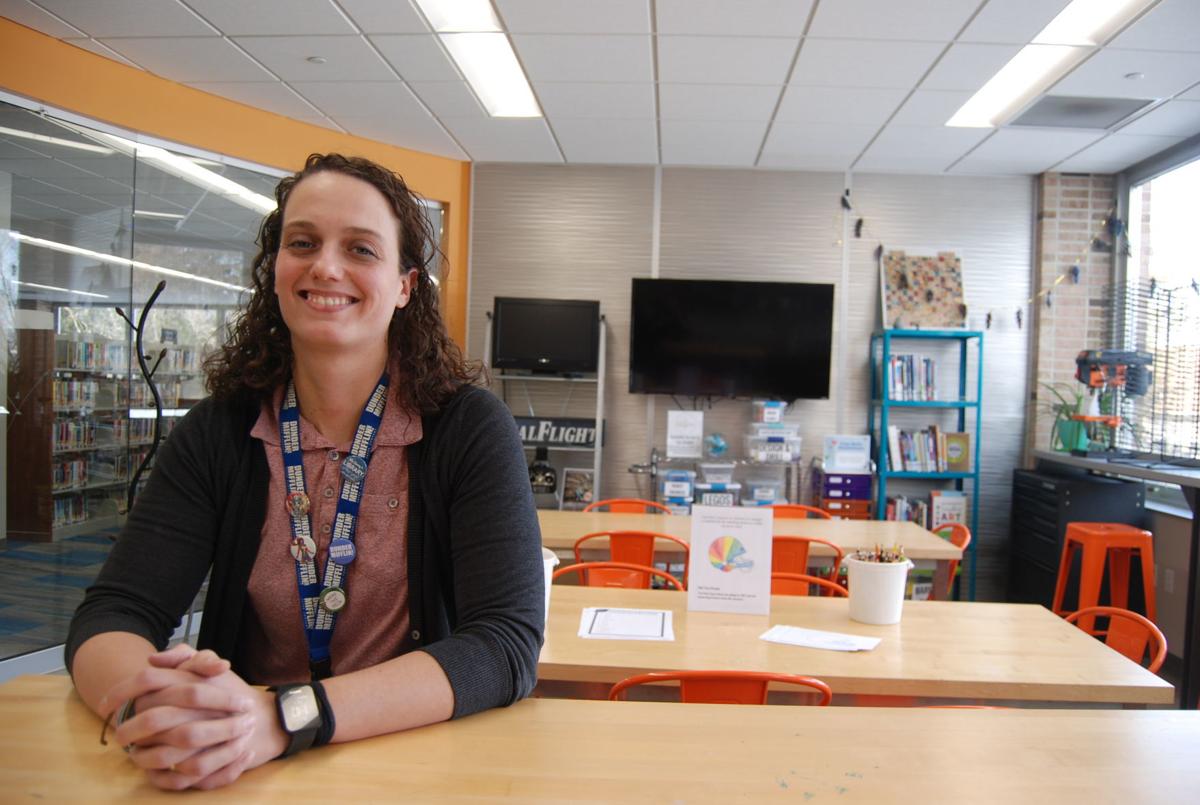 Milton Public Library Director Ashlee Kunkel sits in The Spark, a hands-on learning environment on the library's first floor. Community gathering spaces and learning areas are part of the modern library concept embraced in Milton through library renovations made in 2017. 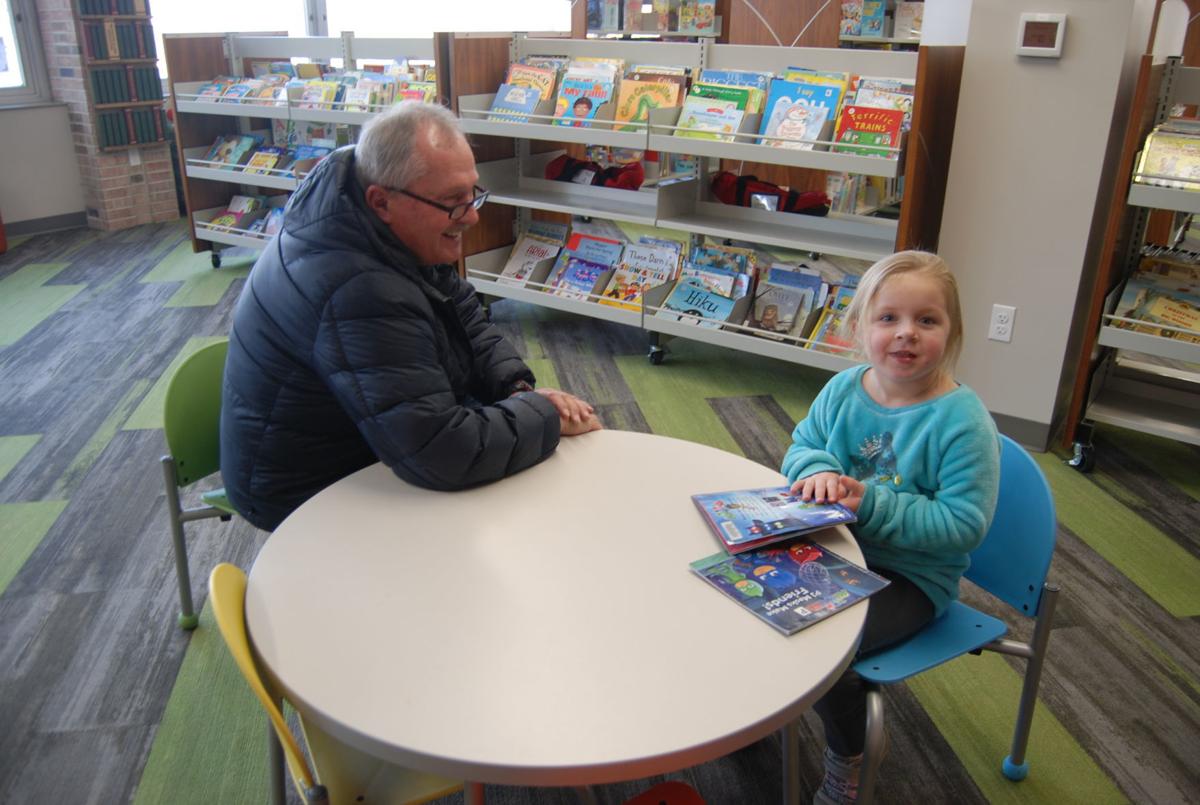 Larry Katwitz, Edgerton, and his granddaughter, Scarlett Hammon, 4, Orfordville, spend an afternoon in the library. Katwitz said the library is one of Scarlett’s favorite places. “She loves playing with toys and finding playmates,” he said, adding that the library remodel made the building “so nice for kids.” 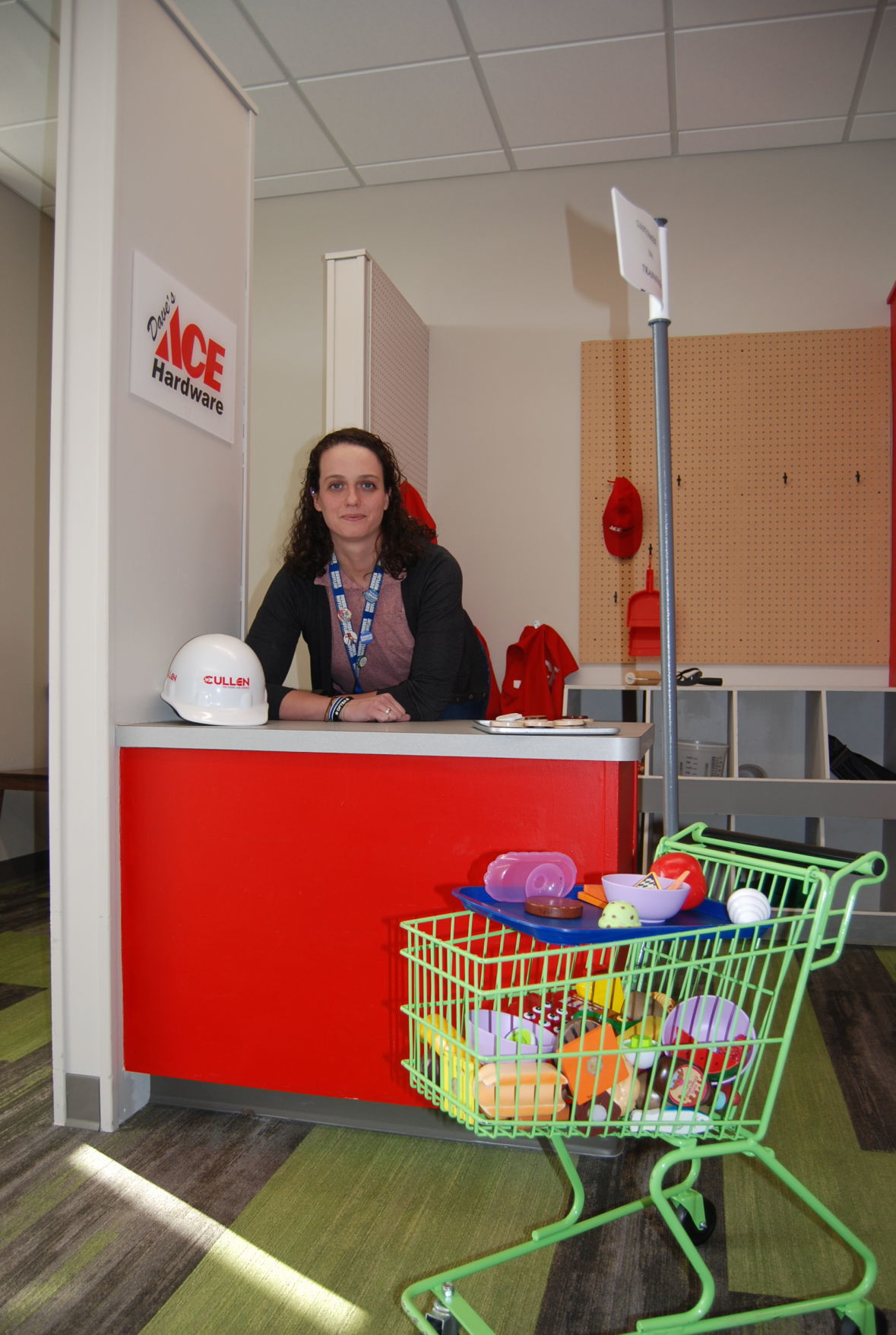 Milton Public Library Director Ashlee Kunkel sits in The Spark, a hands-on learning environment on the library's first floor. Community gathering spaces and learning areas are part of the modern library concept embraced in Milton through library renovations made in 2017.

Larry Katwitz, Edgerton, and his granddaughter, Scarlett Hammon, 4, Orfordville, spend an afternoon in the library. Katwitz said the library is one of Scarlett’s favorite places. “She loves playing with toys and finding playmates,” he said, adding that the library remodel made the building “so nice for kids.”

Prior to 2018, circulation of physical materials was going down, Kunkel said. Circulation of electronic materials has been increasing for at least six years, she said.

She cited community-oriented meeting and learning spaces, increased opportunities in programing, and staff engagement with the public as reasons for the increases.

Professional library consultant for over 30 years and a former Milton Library Board member and president Bill Wilson said the Milton Public Library is outperforming all previously held expectations and receives regular visits from library professionals from across Wisconsin and northern Illinois who are interested in learning about its upgrades.

A PEW Research Center series of studies called “The Internet and American Life,” parts of which, Wilson said, focused on the library sector, confirmed similar trends to those found by Gallup.

Looking at the relationship between visits and checkouts, one fuels the other. People come for programming, but also check out materials, Wilson said.

As early as the 1990s, Wilson said, trade literature began lamenting the end of libraries. Obsolescence was predicted for books in print, with future libraries housing banks of computers used to access online resources.

In his role as consultant, Wilson said, he often suggested libraries could adapt, likening potential changes to those absorbed by the radio industry. When television arrived, he said, many thought radio would become obsolete. Instead, radio changed its programming, carving a media space that could coexist with television. The library, he argued, needed to embrace changes brought by electronic media similarly and evolve.

Today’s evolution in libraries is really a return to their roots, he said, noting that the first libraries in America were in New England and called athenaeums, a Greek word meaning institutions of literacy and scientific studies.

Early libraries featured meeting spaces as key components and held public lectures. “It was a place where people would have opinions, and discussions, and explore ideas,” Wilson said.

Citing a book: “The Great Good Place,” by Ray Oldenburg, published in 1999, Wilson said it outlined the concept of “third places,” which, he said, is the philosophy behind Starbucks coffee shops.

According to the book, people have important places: the first is home, the second is work or school, and a third is where people come to gather, sit, stay and feel comfortable, he said.

“We always maintained that the library was in a perfect position to serve as a third place because it is owned by everyone in the community … it’s a place where people can come together,” Wilson said.

At the Milton Public Library, he said, the concept was embraced early, while Lisa Brooks was the library director. Brooks served between 2007 and 2018.

“When Ashlee (Kunkel) was hired as the teen librarian (in 2009), she took on the programming aspect that would capture teens.” Wilson said.

Kunkel was promoted to assistant library director and renovations began in 2016, she said. The library reopened in 2017.

Recognized as the Library of the Year in 2018, the Wisconsin Library Association wrote that the Milton Public Library was chosen for its “significant transformation” and “creative and unique facility improvements.”

Said Kunkel: “People were saying libraries were dying, but we’ve definitely proven that we’re not. They also said that nobody was reading anymore. But it wasn’t that they weren’t reading; they were just doing it differently, because everybody has an electronic device.

“We use apps like Hoopla and OverDrive, which allows patrons to download eBooks. All they need is a library card. The service is free,” she said.

“We sometimes hear from older patrons, and others, too, that they love the feel of a physical book in their hands. People tend to go back and forth between the physical book and the eBook,” she said.

Renovating the library provided more space for traditional uses while opening the door for new forms of programming. Last year, the library offered over 400 different programs, she said.

“Now we have a Makers Space. Libraries 10 years ago did not have a Makers Space. We offer one-on-one tech help, story time, our food truck rally. We have a teen advisory board and our STEAM program, and we have programs brought to us by other organizations like NAMI (National Alliance of Mental Illness), the Rock County Council on Aging and Hoo’s Woods (Raptor Center).

“All age groups use the library. Teens come in to study and hang out with friends, and the younger kids come to play in the children’s space on the second floor. That area is unique to our library,” Kunkel said.

“Kids like it here. We have youth services staff, like (assistant director) Jayme (Anderson). Kids like her programs, and her personality. Children love her and they love to come here and see her. She also does outreach through the schools. She visits pre-k and kindergarten classes. All of our staff members are out in the schools doing programs,” Kunkel added.

While the library has fewer bookshelves, there are 27,400 books in print, 4,000 DVDs and 1,200 audio books and CDs included within its collection.

“We also have some nontraditional materials like ukuleles, microscopes and disc golf sets,” Kunkel said.

In 2018, Kunkel said, the library joined the catalog service of the Lakeshores Library System, giving Milton’s patrons access to materials within 20 area libraries. The library is also part of the Arrowhead system, which includes the seven libraries within Rock County, she said.