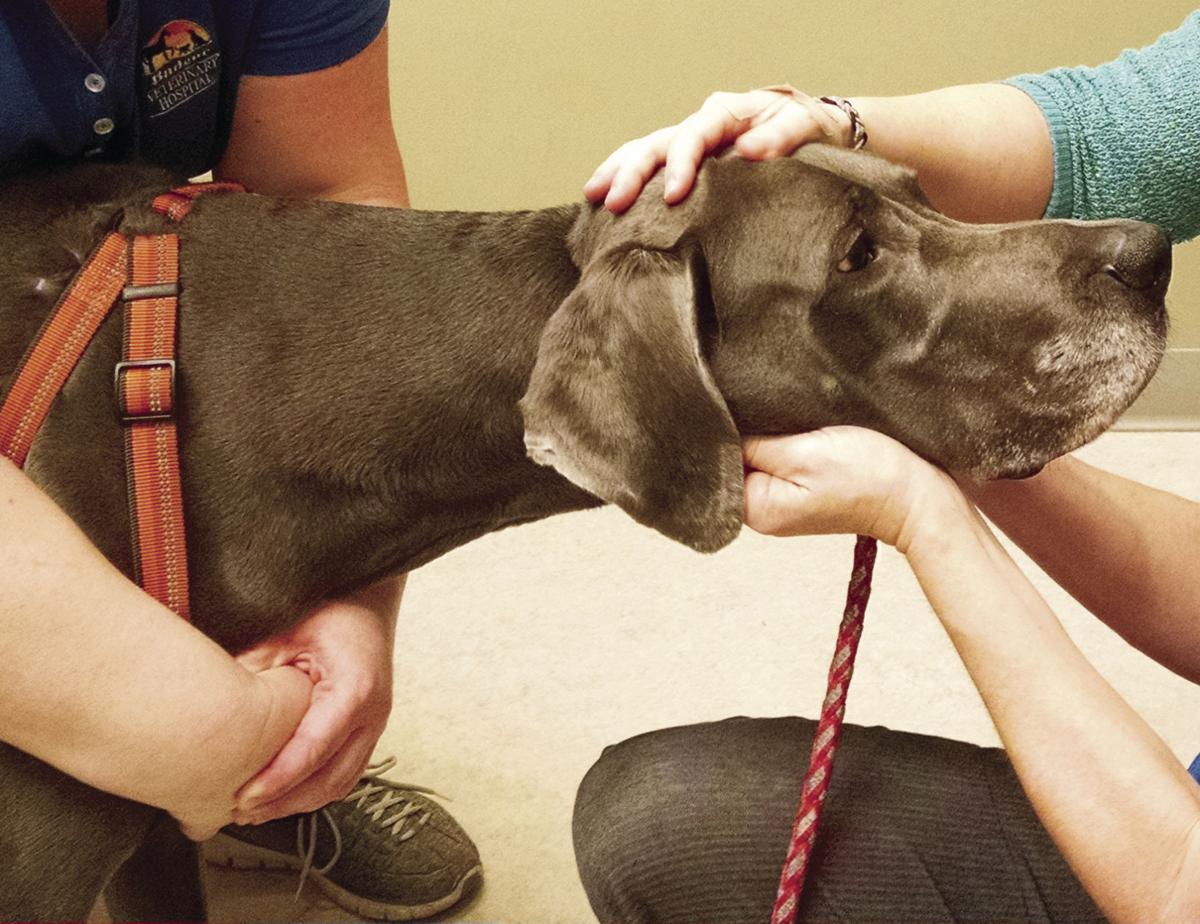 Tazz, a Great Dane, receives treatment to help his back that’s a combination of chiropractic care, physical therapy and massage. 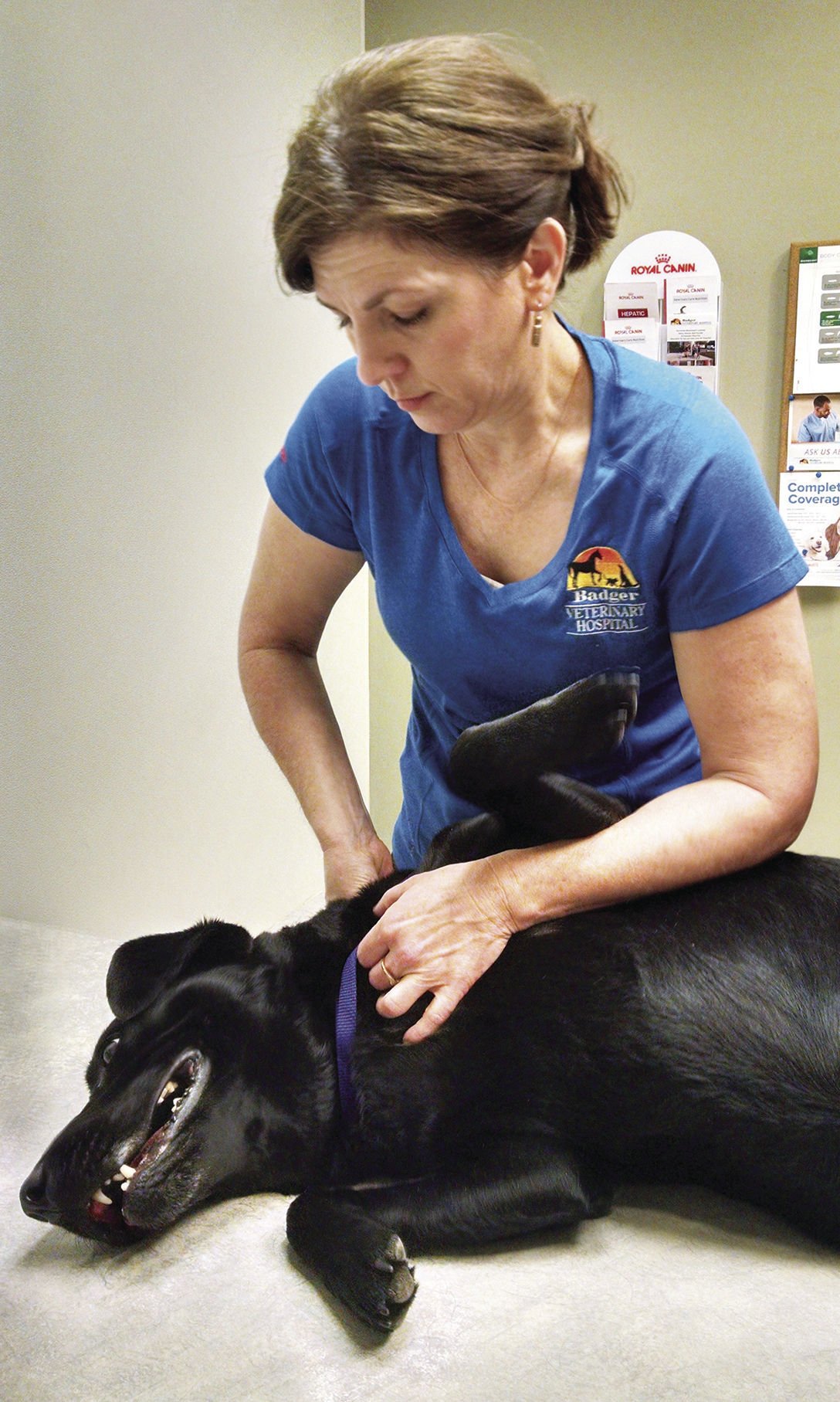 Mele, a British Black Lab, could barely walk the first time she was brought in for chiropractic care. Today, Mele, who once couldn’t carry a bird, is back to hunting.

Tazz, a Great Dane, receives treatment to help his back that’s a combination of chiropractic care, physical therapy and massage.

Mele, a British Black Lab, could barely walk the first time she was brought in for chiropractic care. Today, Mele, who once couldn’t carry a bird, is back to hunting.

If you’re experiencing pain in your joints, having problems with your spine or trouble moving your neck, there’s a good chance a trip to the chiropractor will help you recover. But what if your furry four-legged friend comes limping when you call, or yelps and can barely move after jumping off a piece of furniture? Or what if your canine hunting partner can’t retrieve a duck or goose because of an on-going problem with her neck? There’s a good chance a trip to a chiropractor will help them, too.

Margo Nolte is a chiropractic doctor at Badger Veterinary Hospital, 3113 E. McCormick Drive, Janesville. She started practicing on humans early in her career. Her focus turned to small animals after she experienced the satisfaction of working with and seeing a cat or dog regain their energy and agility after treatment. Her patients, happy with how she had helped them, began asking if she could help their pets, too. It started, Dr. Nolte recalled, when one of her patients had mentioned their dog had injured its back and asked Dr. Nolte if she’d take a look at it. She did, and before long, other patients came with similar requests. Usually, the patient said the pet wasn’t moving right or just didn’t seem happy.

“You can tell when a pet feels well,” says Dr. Nolte. “They have good energy, dogs will wag their tail and come running, and they want to spend time with you and do things. When that changes, you can tell that something’s not right.”

Making the leap from treating humans to treating animals is easier than you might think. When working on humans, a chiropractor relies on palpation. They will feel the joints and see how they are moving.

“They have a certain feel when they are moving right,” says Dr. Nolte, “and a different feel when they are not.” Similarly, muscles have a normal consistency. This changes when there is an injury or the person is not well. Through training and experience, the chiropractor learns to feel these differences with their fingers. The same is true whether they are treating a human or an animal.

While Dr. Nolte treats a number of conditions in the animals she sees, acute disks and age-related problems are the most common, especially in dogs. Acute disks occur in all breeds, sometimes leaving the dog paralyzed. But dogs respond positively to treatment and there’s a very high success rate. Results are quick and can be seen even after the first treatment. Dr. Nolte recalls one dog whose owners originally had their pet’s herniated disk treated with surgery. At that time, the owners were unaware that chiropractic treatment was an option. But after the dog ruptured a second disk, the dog was brought to Dr. Nolte. Not only was the problem with the second disk resolved solely through chiropractic, but lingering residual problems from the first injury disappeared as well.

In aging animals, it can take time before a problem is noticed by the pet owner. Usually, if a human feels pain or discomfort, they will seek treatment early, before the damage is too great. But a pet can’t communicate and their owners aren’t aware that the animal is having trouble until it becomes obvious. By then, the animal has likely been in pain a long time.

But once the animal is brought in and receives treatment, Dr. Nolte says, “it’s like the fountain of youth!” She says the animals are excited, engaging once again and moving quickly. “That’s why I like animal chiropractic,” she adds, “because the changes are so profound and quick.”

Dr. Nolte’s own dog, a Portuguese Water Dog, at age 15 has exceeded the usual life expectancy for the breed. Lively and active, the regular treatments Dr. Nolte has provided have given her pet a good quality of life as well as perhaps an extended one.

While traction for a human’s spine problem would require special equipment, traction to open up the spaces between the bones of a dog’s back can be accomplished in just a few minutes in the chiropractor’s office, no machinery needed. Tazz, a Great Dane, looked calm and relaxed as Margo, aided by an assistant, worked to loosen up his spine. Afterwards, Dr. Nolte worked on Tazz’s joints, moving on up to the shoulders and ending by stretching his toes. As Dr. Nolte explained, it’s a combination of chiropractic, physical therapy and massage.

Mele, a female British Black Lab, suffered from chronic neck and shoulder issues for about two years. After her owner tried multiple things, including seeing specialists in Madison and having Mele undergo numerous tests and even acupuncture, there was no improvement. As a hunting dog, Mele couldn’t carry a bird and by the time Margo saw her, she could barely walk. Treatments were weekly at first, with Dr. Nolte working on her muscles, spine and neck. Then the treatments went to two weeks and then four. Now, Mele hunts unrestricted.

While Dr. Nolte works mostly with dogs and occasionally a cat, she once was asked by a friend to take a look at a goat who had a swollen knee. The vet didn’t think it was infected and Dr. Nolte was able to treat the goat effectively. Often, animals with leg problems are put down. Chiropractic treatment can potentially save them.

It’s no wonder Dr. Nolte loves the work she does. Pets are loved by their owners and when an animal hurts, it brings pain to the family too. Dr. Nolte had goosebumps as she recalled one of the most dramatic cases she had experienced. A German Short-Haired dog was carried in by his owner and set down. Dr. Nolte asked to see the dog stand so that she could establish a baseline and gauge his abilities. The dog stood a moment, then collapsed. The owner had brought x-rays and other documents which showed a swollen neck disk. With no strength in all four limbs, and the passage of about three weeks’ time, the case looked dire. Dr. Nolte treated the animal and one week later, the dog and owner came back. The door opened, the dog bounded in, ran circles around Dr. Nolte and then jumped up and licked her arms. The owner cried as he told Dr. Nolte how, after leaving her office after that first treatment, he had stopped at the store. When he came back, the dog was sitting—something he hadn’t been able to do in weeks—in the front seat, waiting for him. After that, the dog got better and better.

While treatment is still usually effective even after time has passed or other options have failed, recovery will be smoother and quicker the sooner treatment begins. Dr. Nolte would love to see everyone bring their pet in for an occasional check. The pain might be there but they can’t let you know until it’s progressed to the point where they limp or cry out. Early intervention will keep your pet happy, healthy and youthful. Their owners will be happy, too.