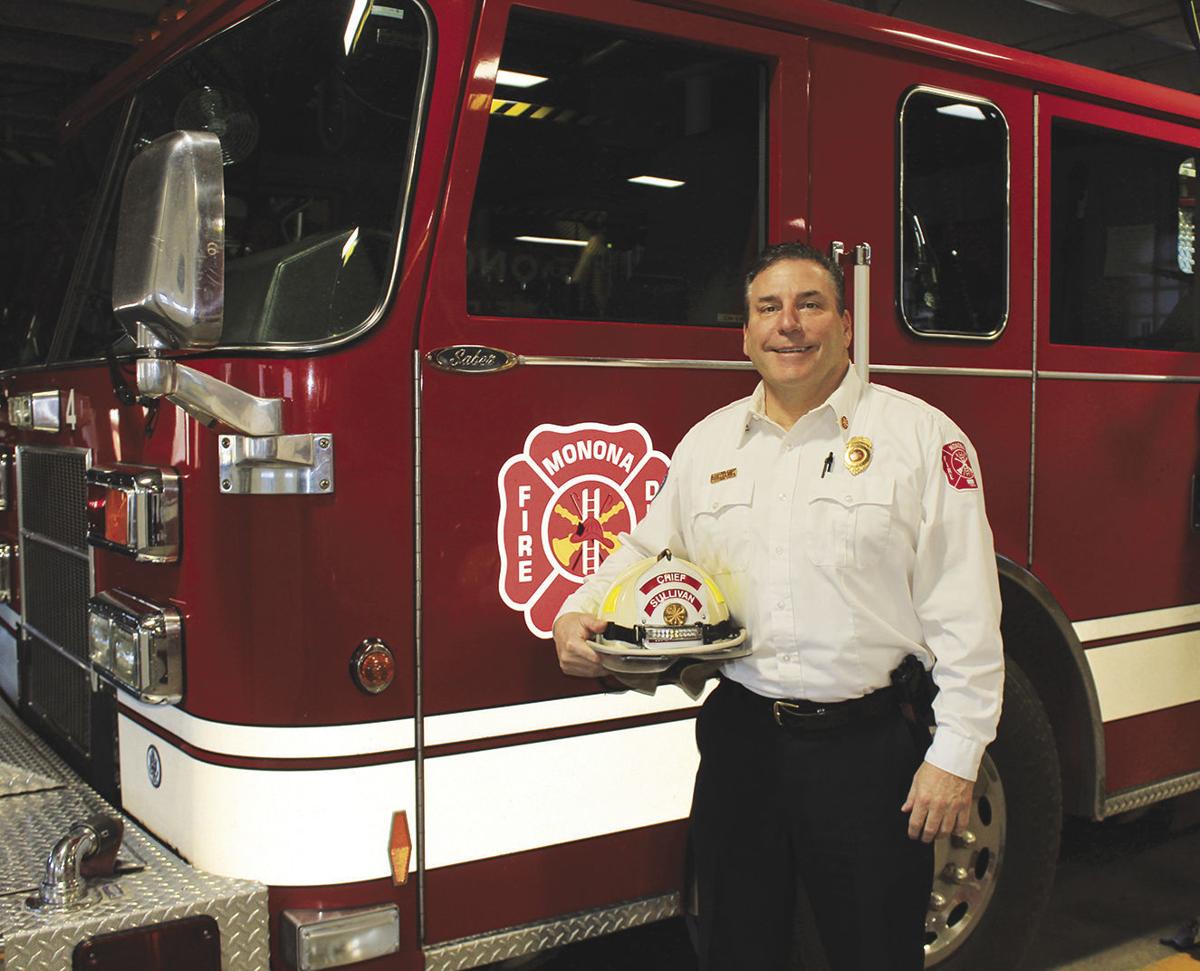 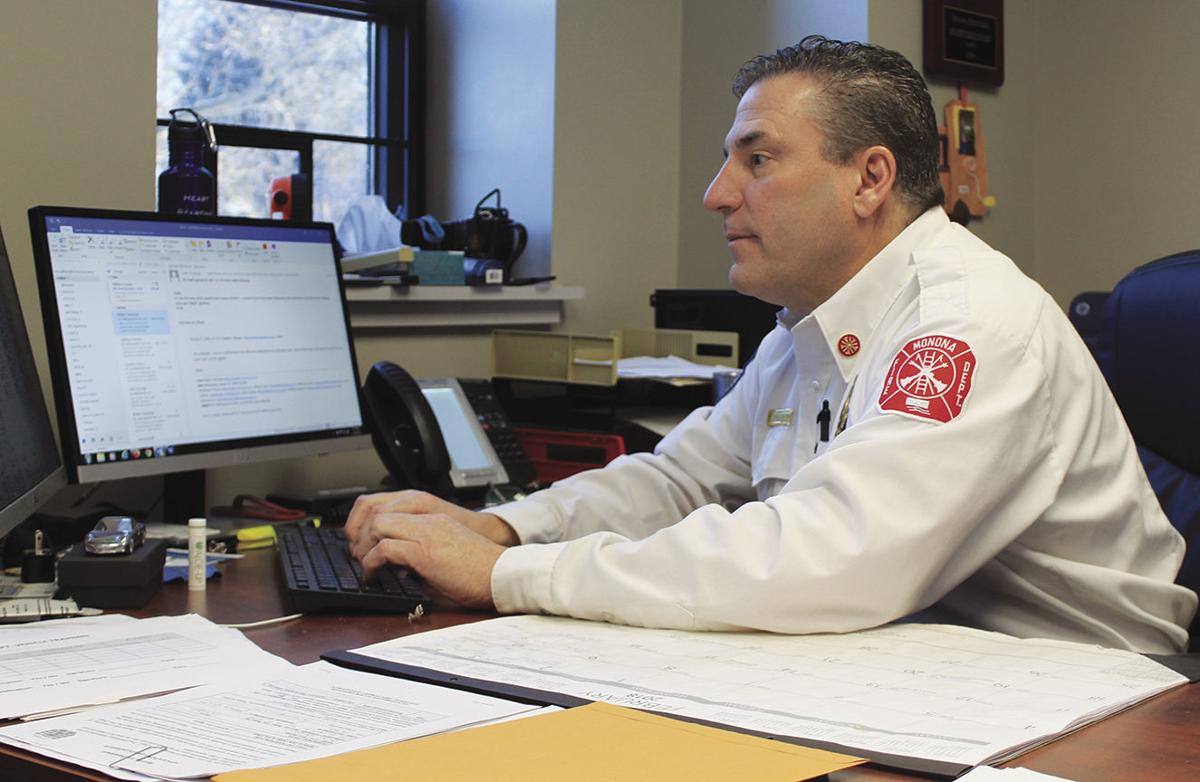 Monona Fire Chief Scott Sullivan will retire March 31. Sullivan has been chief for 10 years and served for 22 years with the Town of Madison Fire Department. 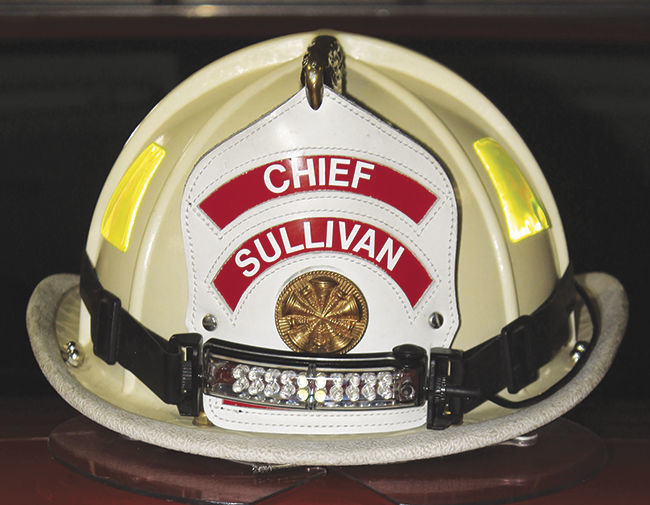 Monona Fire Chief Scott Sullivan’s helmet rests on the hood of one of the department’s vehicles. Sullivan will retire this spring. 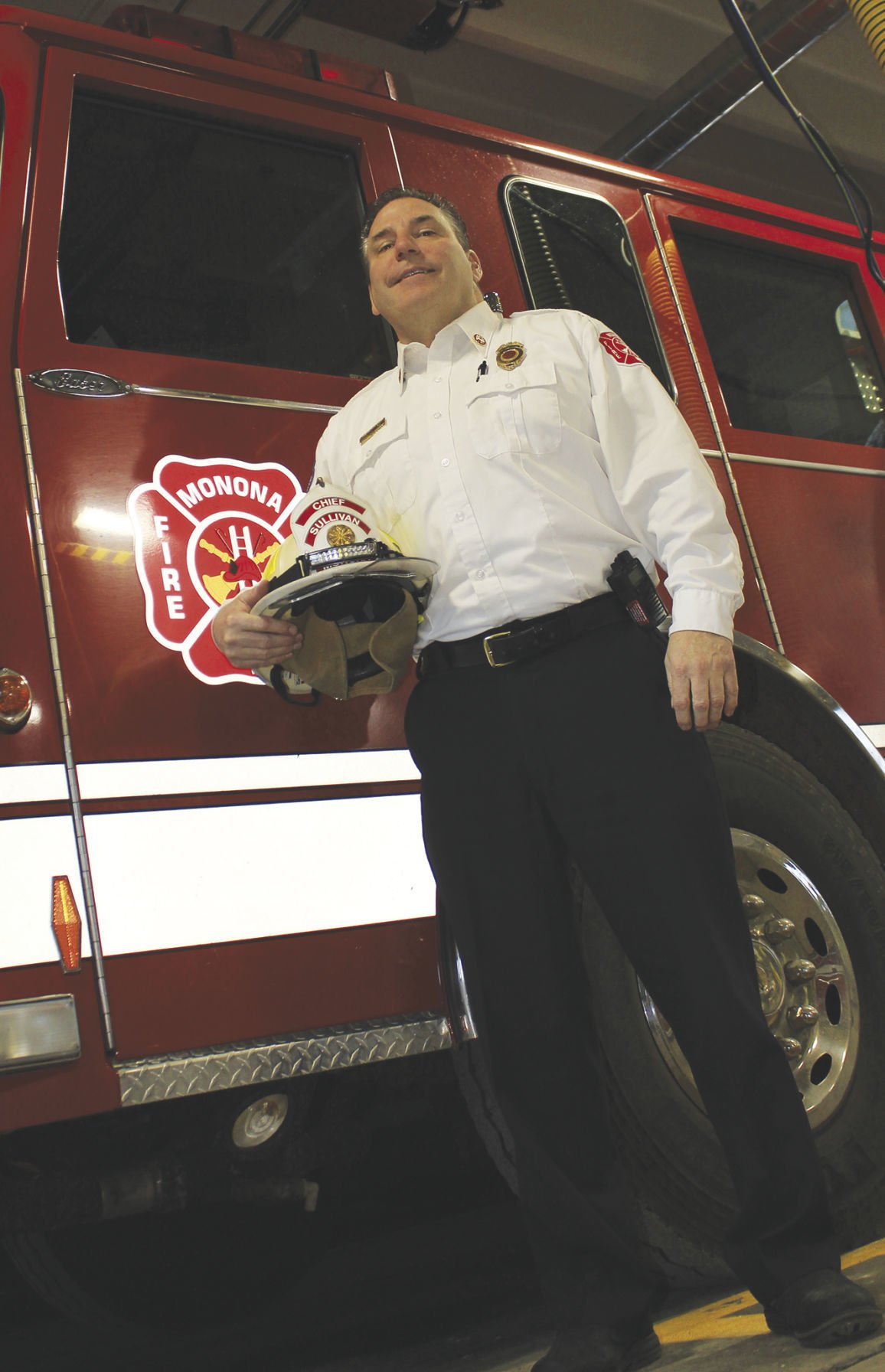 Monona Fire Chief Scott Sullivan will retire March 31. Sullivan has been chief for 10 years and served for 22 years with the Town of Madison Fire Department.

Monona Fire Chief Scott Sullivan’s helmet rests on the hood of one of the department’s vehicles. Sullivan will retire this spring.

It’s no April Fool’s Day joke. When April 1 rolls around this year, Monona Fire Chief Scott Sullivan will be retired. After a decade leading the department, his last official day will be March 31.

“I’ve always been a believer that the chief should be a chief in any particular department for 10-15 years and then take the next step,” he said. “I think it’s twofold. For the chief, it gives them new challenges, new department, new issues, new possibilities. For the department, both the one they’re leaving and going to, it’s new fresh blood, fresh thought processes, fresh excitement.”

In Sullivan’s case, though, it’s not a new department but a retired lifestyle that will greet him when he finishes up in Monona.

Those in the fire service can retire with full benefits at 53, Sullivan’s current age. He’s been a firefighter for 32 years, first with the Town of Madison and the last 10 years with Monona.

It’s no surprise there have been a lot of changes in the past 30 years, but it’s not in areas one might think.

“There’s more concentration on firefighter health and safety,” Sullivan said. “Years past, it was the machismo, the soot on your face showed that you were a firefighter. Now, we’ve realized that all that’s doing is killing our firefighters. Cancer is way up for firefighters and first responders. Those are big things.”

Stressed now among firefighters is the importance of cleaning the gear and themselves to remove any trace of carcinogens. Mental health is also a priority.

While there have been some improvements to equipment, high temperatures fighting fires prevents an overabundance of electronics. And the temperatures seem to be getting hotter.

“You go into somebody’s house now, everything’s got polyester and plastic. Plastic burns faster, hotter, produces more carcinogens,” Sullivan said. “Back in the olden days, everything was cotton, solid wood, so it took much longer for it to burn. It didn’t produce the carcinogens. Even the construction – years ago, it was heavy timber … now it’s all engineered lumber that’s put together with glue that once you add heat to it, it deteriorates, and now the structural integrity has been impaired.”

Even though Monona has nine full-time staff members, Sullivan’s position is still considered a working chief’s job. In addition to the administrative work, he still responds to calls.

“I’m driving the truck less,” he said. “I’m still getting in the truck and go on calls with them, depending what staffing is.”

Paid-on-call and paid-on-premise firefighters have replaced the volunteer staffing of the past.

After graduating from Madison East High School, Sullivan attended Madison Area Technical College with plans to be a vet tech.

“It just didn’t click the way I thought it would,” he said.

He stepped away from school for a year while he worked, but after six months, he realized he needed to go back to school.

“I was just flipping through the MATC catalog and came across firefighting and thought, ‘That looks cool.’ I’ve been kind of an adrenaline junkie,” he said.

He completed his firefighting training as well as EMT training.

Sullivan was injured twice in his career – both times when he was with the Town of Madison Fire Department.

An apartment fire on Somerset Circle in 1990 resulted in the deaths of five children.

“I burnt both feet, both knees and one hand,” Sullivan said.

The other time was when he was talking to a Town of Madison police officer who was sitting in his cruiser. Another car hit some black ice and collided with the squad car, which was pushed into Sullivan.

One of his most memorable calls happened in Monona. He and others responded with an ambulance to help an elderly man.

“He was a World War II veteran, and he started talking and telling us about his experiences. He was (at) Pearl Harbor when it was bombed,” Sullivan said. “Just hearing the firsthand experience from him … It was fun just to listen to him and see our crew. We went back in service but stayed there for probably a half hour, and everybody on the crew was completely listening to what he had to say.”

After enjoying the first few weeks of retirement, Sullivan will begin to fix up his house. With one daughter at Marquette University and the other a high school junior enrolled in online studies, he expects to be around for another 18 months before he sells his house and moves away.

“The grand plan is to move to the Caribbean, buy a boat and live on the boat,” he said.

On this, he’s just as serious as he is about his job.

“It’ll be a motor yacht,” he said. “I’ve owned boats – I got hired in 1989 on the fire department. The first thing I bought was a ski boat. I’ve owned a boat, since 1989, every day except for four days. It was driving me nuts those four days … right before the Fourth of July.”

The one thing Sullivan would have liked to see through in Monona is the construction of a new public safety building.

“There’s a committee working on it, so we’ll where that goes,” he said.

He continues to believe a location on Monona Drive is best, somewhere between Dean Avenue and Nichols Road.

Personnel is another challenge that will face the new chief.

“Staffing is always a challenge,” he said.

Sullivan said the addition of more full-time staff has helped. The paid-on-call and paid-on-premise is also helpful, but these men and women have other jobs to juggle as well.

Budgeting goes hand in hand with the staffing issues, he said.

While he won’t miss night meetings, he will miss the people he works with and the camaraderie with them.

“It’s basically a second family,” Sullivan said. “You spend a lot of time here with the group, and we have a great group of people. That’ll be what I miss the most.”

The Monona Police and Fire Commission will conduct a search for a replacement. When members choose someone, they will forward the name to the Monona City Council for approval.

With luck, the new chief will be hired in the middle of March and be able to work with Sullivan on the administrative parts of the job, such as payroll, purchases and budgeting. Day-to-day operations won’t be affected, he said.

“What I’m most proud of with the department are the accomplishments we’ve made,” he said. “We went from an intermediate level ambulance service to a paramedic level service. That was huge for the residents. Going from six full-time to nine full-time firefighters. The commitment of our paid-on-call, paid-on-premise, volunteers – these people are here day in and day out, putting their time in to do training, to respond to the calls so that the department can continue to operate.”