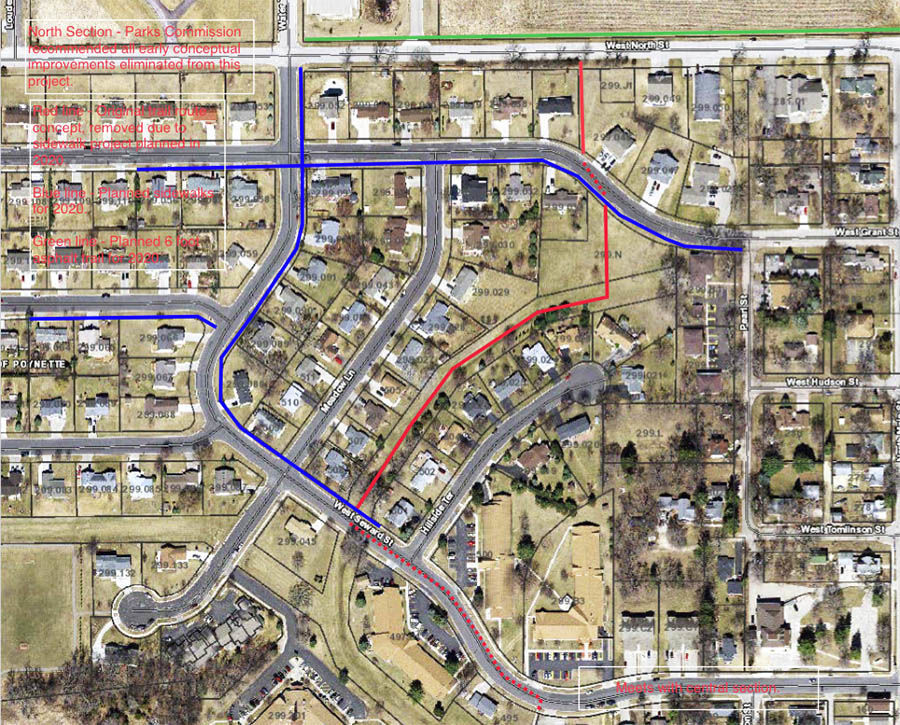 This graphic shows the plans for the north section of the North/South Trail in Poynette. 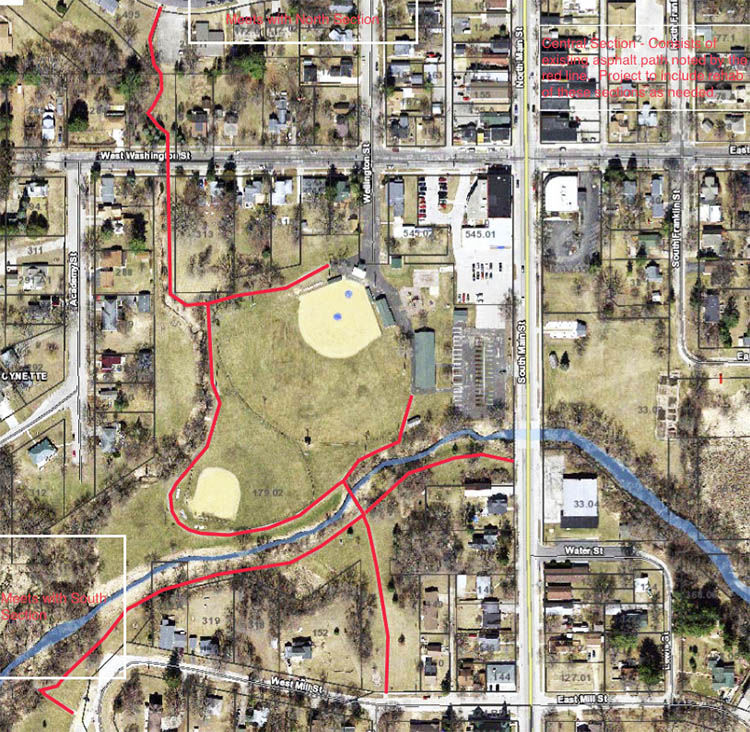 This graphic shows the central section of the North/South Trail project, which includes rehabbing existing trails. 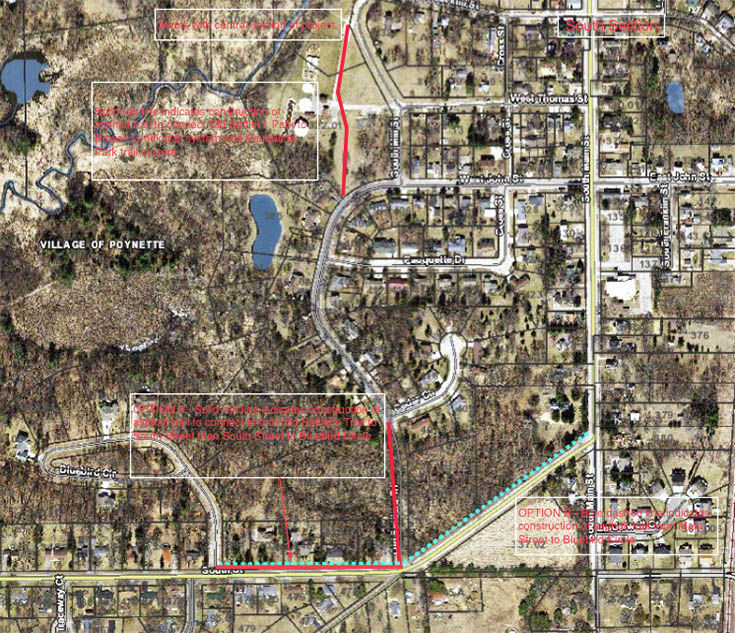 This graphic depicts the plans for the south section of the North/South Trail. The village's parks commission recommended two options for this portion of the trail. The Poynette Village Board approved option B (light blue dotted line) at its Monday meeting.

This graphic shows the plans for the north section of the North/South Trail in Poynette.

This graphic shows the central section of the North/South Trail project, which includes rehabbing existing trails.

This graphic depicts the plans for the south section of the North/South Trail. The village's parks commission recommended two options for this portion of the trail. The Poynette Village Board approved option B (light blue dotted line) at its Monday meeting.

An idea for the North/South Trail weaving through Poynette, conceived during the village’s parks commission’s five-year planning process in 2017, will soon become reality.

The Poynette Village Board approved one of two options recommended by the parks commission for the project’s scope at its meeting Monday night. Several residents spoke out against option A during the public comment portion of the meeting and after a discussion amongst trustees, the board voted 5-1 to approve option B. Trustee Chris Polzer was the only “no” vote; Trustee Judainne Stronach was absent.

After the parks commission did not receive grant funds from the Department of Natural Resources (DNR) last year to help offset the costs for a north/south trail connecting North Street to South Street, an attempt to receive the grant this year was successful. The village was awarded up to $133,060 or 50 percent of the project’s total cost. The project is included in the 2020 budget.

The trail project will incorporate rehabbing existing trails through Pauquette Park and constructing a trail from the Rowan Creek trail system to Old Settler’s Park. Along with that, the parks commission recommended two options for a south section to complete the North/South Trail.

Option A included constructing a piece of trail from the end of Old Settler’s Trail to South Street. The parks commission preferred this option, according to Village Administrator Martin Shanks, who explained the section of trail would be constructed where Old Settler’s Trail terminates, leading users through a forested area, past the village’s lift station. The trail, with option A, would have then come out on South Street and continued west to Bluebird Circle.

Instead of connecting the path from the end of Old Settler’s Trail, option B has a connection from Main Street to Bluebird Circle made possible by the construction of an asphalt path. Parks commissioners drafted option B as an alternative to their preferred option A, because they were unsure if the DNR would accept option A, due to its lack of connectivity down Old Settler’s Trail, according to Shanks.

Polzer, who also serves on the parks commission, said he did not see option A as a loss of connectivity in the trail. Although he said he was comfortable moving forward either way, Polzer voted against option B in favor of option A.

“I’ve appreciated the public input (on this topic) and the civil decorum has been refreshing,” Polzer said. “However, the bottom line is, you tasked the parks commission with making a decision.”

Village President Diana Kaschinske had multiple reasons why she preferred option B for the south section of the trail.

“One of the things that I do not like about option A is that it’s a trail that goes nowhere,” Kaschinske said. “It stops.”

She also noted that since the DNR had not yet accepted option A, the board would be approving it based on knowledge that it might not be permitted.

From a timeline standpoint, to move forward with the DNR grant, the project’s scope had to be finalized by the end of this month, according to Shanks. The village had originally budgeted $266,000 for the trail project, but option B will only cost approximately $263,000. The DNR grant will fund half of it. In the first part of 2020, the project will be bid out. Construction on the trail is anticipated to begin in the late spring and last into the summer.

Maps of the proposed south section options and trail project are included with this article on www.poynettepress.com.

In other Village Board business, the board unanimously voted to keep Jamieson Park open during the winter months so individuals may utilize the dog park, trails and future amenities. Before the change, the park was closed from Nov. 15 to April 15. Now it will be open daily like all other village parks, which are only closed overnight from 10:30 p.m. to 4:30 a.m.

The village’s public works crew will plow an area for people and cars to access the dog park after snow events, according to a memo submitted to the board by Shanks.

In addition, Kim Sopha from Hickory Woods Development Company, Inc., appeared before the board Monday night to discuss the future of the undeveloped West Ridge subdivision. Currently the development costs of the subdivision are more than can be supported by the sale of homes, according to Sopha.

Sopha presented a few options to encourage the subdivision’s development, including potentially increasing the density of lots or creating a tax increment finance district (TIF). After a brief discussion by the board and Shanks, it was determined the topic should be further explored by staff and taken up again at a future board meeting.