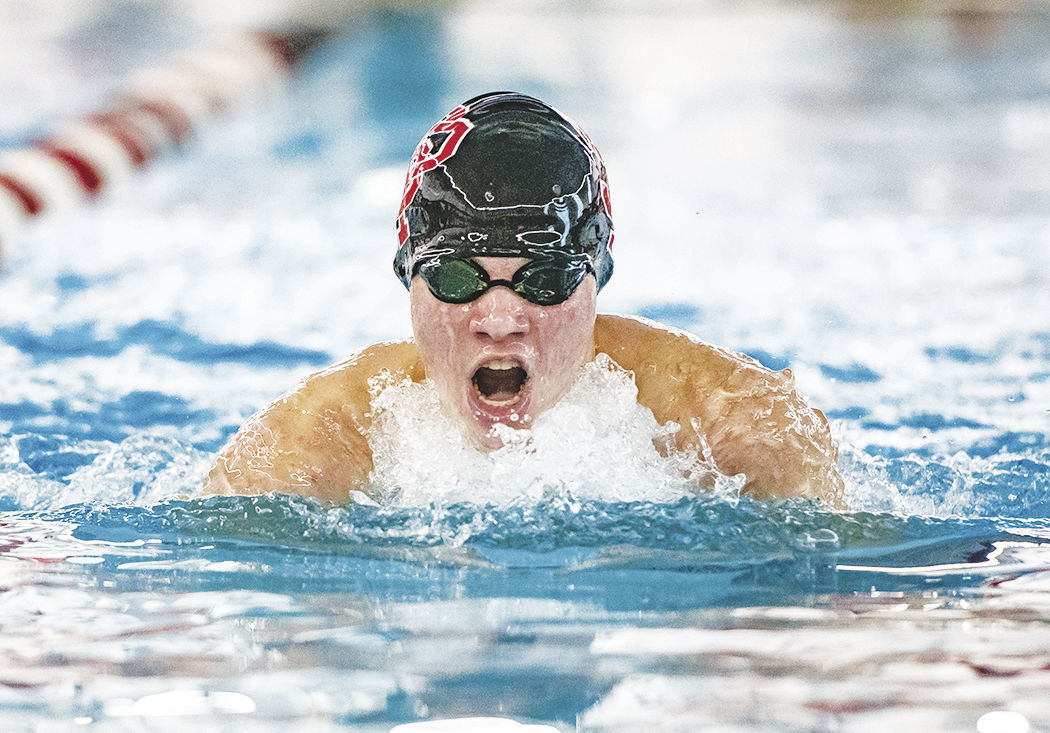 Sun Prairie’s J.P. Anhalt finished seventh in the 200-yard IM with a time of 2:06.08 during Saturday’s Sun Prairie Invitational. The Cardinals blew away the field taking first place.

Sun Prairie’s J.P. Anhalt finished seventh in the 200-yard IM with a time of 2:06.08 during Saturday’s Sun Prairie Invitational. The Cardinals blew away the field taking first place.

Talk about a great start.

“We could not have scripted it any better,” said Sun Prairie head coach Joel Coyne. “We exceeded even our expectations; it’s a very encouraging way to start.”

The host Cardinals dominated the field finishing with 524.5 points, over 157 more than runner-up Madison Memorial (367).

The day was dominated by Ben Wiegand. The junior standout earned the maximum of four wins, two individually and two on relays.

Wiegand began his day swimming the second leg of the 200-yard medley relay, teaming up with Jonathan Schluesche, J.P. Anhalt and Ethan Braatz with a winning time of 1 minute, 36.44 seconds.

That was just the tip of the iceberg as Wiegand then shattered the school’s 50 freestyle record with a remarkable early-season time of 20.55 seconds, breaking the previous mark of :20.91 which he set at last year’s WIAA State Meet.

“You can’t underestimate Ben and how much he’s going to impact this team, he’s a special kid,” said Coyne. “It’s hard to put a projection on just how fast he can go, we don’t really know what his ceiling is. He just gets faster and faster.”

Wiegand missed Friday’s season opener as he was just returning from competing in the U.S. Open Olympic Trials in Atlanta on Thursday and Friday.

“Just getting back on Friday and then jumping back into the pool on Saturday morning, that’ s pretty grueling turnaround. Then to do what he did was pretty remarkable,” added Coyne.

Sun Prairie won all three relays both Friday and Saturday. On Saturday, the 400 freestyle quartet of Schluescher, Jonah Gunnink, James Werwie and Roggenbauer completed the Invite sweep winning in 3:17.96.

“It’s always a challenge to find the right mix to maximize points, it’s kind of like moving the chess pieces around,” said Coyne in reference to assembling relay teams. “Relays are worth double points and when it comes to invites and relays and eventually the state meet, it’s going to be the driver.”

Roggenbauer added the team’s other first, winning the 100 freestyle in :48.31.

Roggenbauer, Werwie and Gunnink each won two races leading the Cardinals to a convincing win over visiting Madison La Follette in its season and Big Eight Conference opener Friday.

Another record to fall was the 100 butterfly mark as Schluesche’s time of :53.88, breaking 2013 record of :53.98 set by current Cardinals assistant coach Konrad Plomedahl.

“He had a remarkable weekend,” said Coyne of the sophomore. “There’s no question that he’s going to be a player this year. Last year he had a great season, but between his freshman year to now he’s gotten so much stronger — he worked his butt off in the off-season

“I think we’ve got something pretty special moving forward and the way we’re going to be able to reach our goals is if we start working extra hard; the off-season workouts are paying off, but there’s still a lot of work to do,” Coyne said.

The Cardinals will have a pair of events again this upcoming weekend. On Friday, they travel to Madison Memorial for a tripledual with the Spartans and Madison East. Swimming begins at 5:30 p.m.

“Memorial has been the perennial powerhouse of the Big Eight,” said Coyne. “We beat them on Saturday, now we’re going to have to do it again in a dual meet.”

On Saturday, Sun Prairie travels to Fort Atkinson to take part in the Fort Invitational at 10 a.m.

“We could not have scripted it any better. We exceeded even our expectations; it’s a very encouraging way to start.”