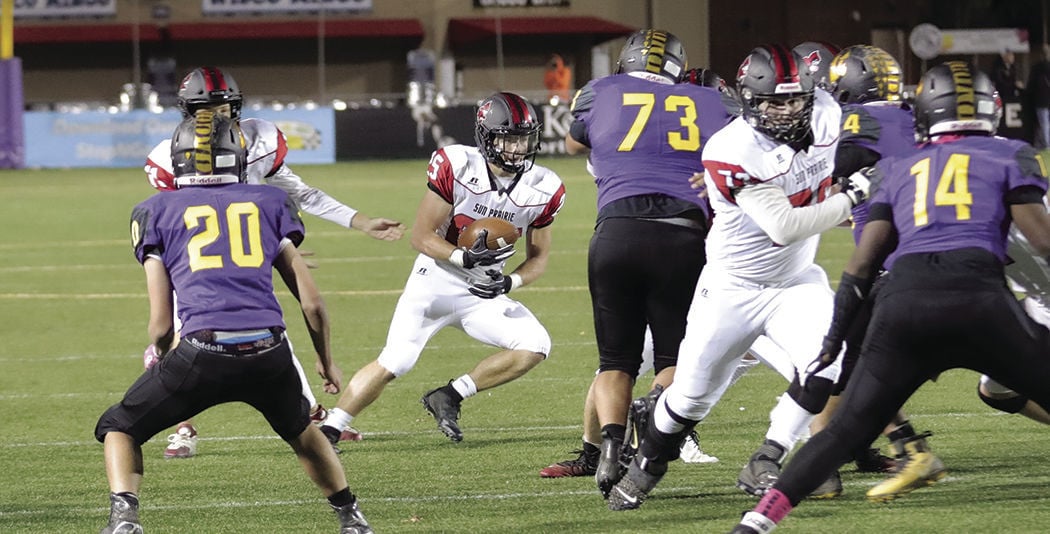 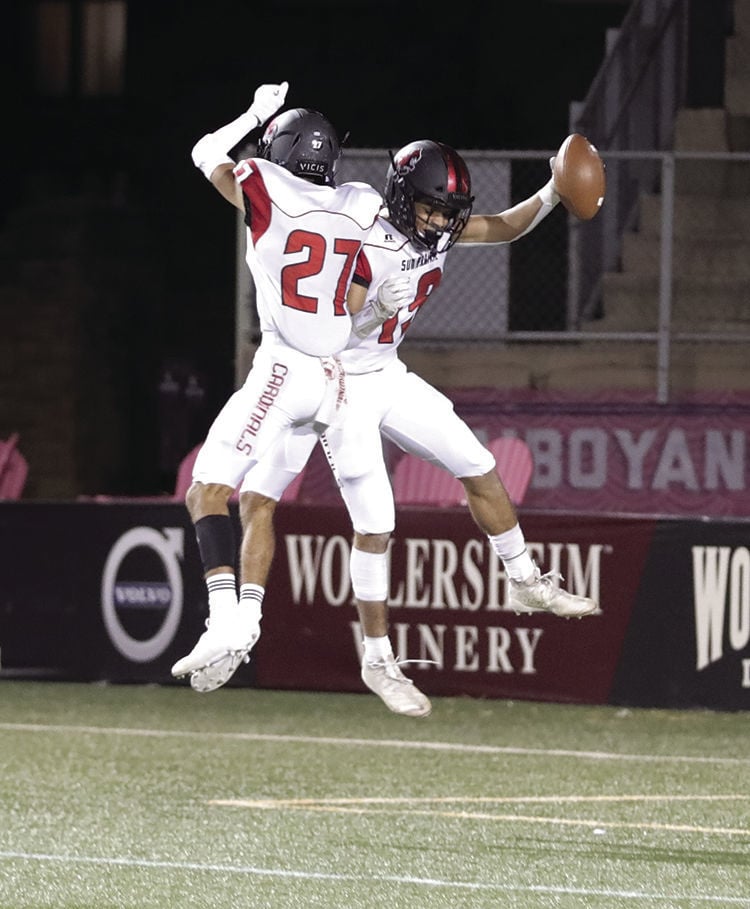 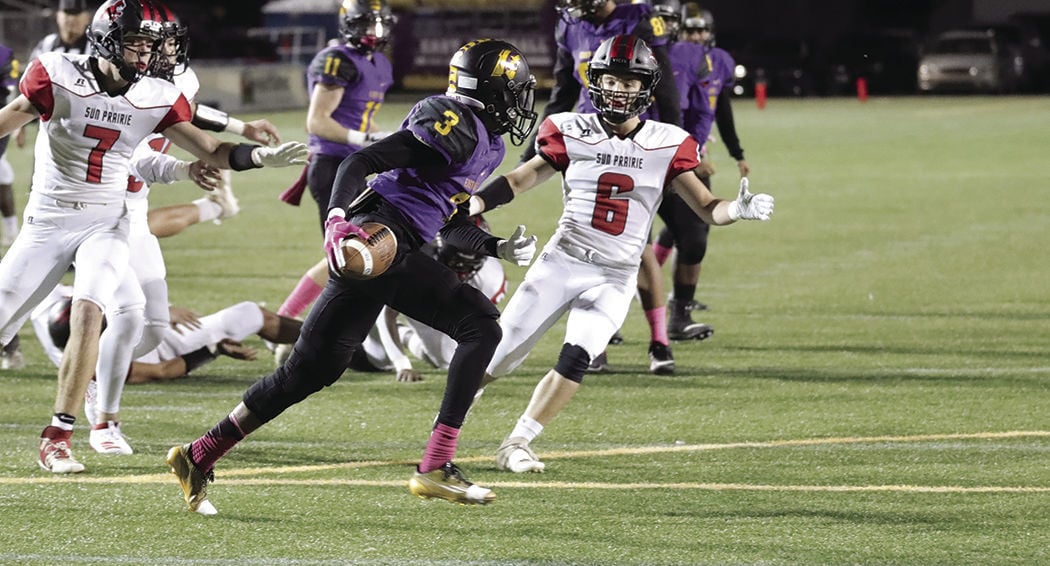 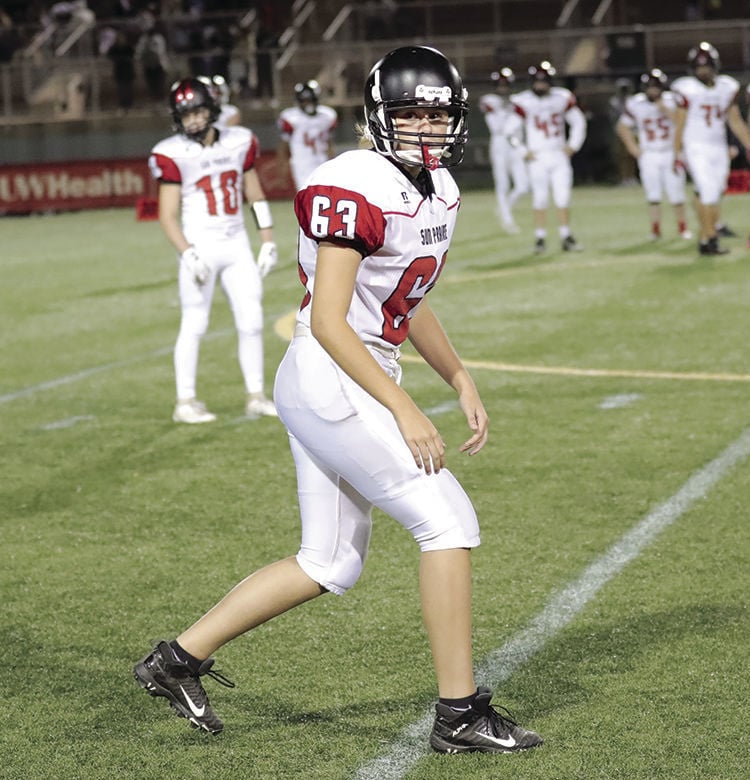 MADISON — The sting of last Friday’s loss to Madison La Follette weighed on the Sun Prairie football team for an entire week, but a 40-point first half and eventual 47-14 win over Madison East Friday night at Breese Stevens Field took some of that hurt away.

The Cardinals’ fifth win in Big Eight Conference play made them WIAA playoff eligible for the 16th straight season, and 29th time in program history.

“We faced some adversity here the last couple of weeks, so we are glad we could get that fifth win,” Sun Prairie head coach Brian Kaminski said. “The message is either you’re on board or you’re not: if you’re on board, lets go have a heck of a ride. I’m proud of the kids that were here tonight, they did a tremendous job.

“The losses always sting, but all you can do is learn from them and decided to get better and our kids did that this week.”

Sun Prairie (5-2 both overall and in the Big Eight) built a 21-7 lead on the Purgolders (3-4, 3-4), but really put the game away in the final five-plus minutes of the first half scoring three times.

Scoring runs of 10 and 7 yards by senior running back Nathan Schauer — his third and fourth of the game — occurred in a span of 1 minute, 17 seconds and broke the game wide open.

Schauer’s 10-yard run capped off a seven-play, 48-yard drive, while his second was set up by senior Jamel Stone’s interception off a deflection of East wide receiver Jevan Boyton.

It was the first of a career-high three interceptions for the senior captain.

“I guess I was in the right place at the right time,” Stone said.

Stone would intercept Purgolder quarterback Phil Roh III again on the very next series, and again off a deflection this time from wide receiver Keonte Jones, setting up senior Colin Schaefer’s 4-yard reception from Stevens that gave the Cardinals a 40-7 halftime advantage.

Stone intercepted Roh III once more in the second half. After intercepting just two passes last season, he now leads the team with four.

Stone was part of a defense that limited East to just 8 yards rushing.

“I’m thankful for the linebackers and D-line, they work their butts off every week,” he said.

Junior linebacker Mekhi Gullens led the way with eight tackles (six solos) while sophomore Addison Ostrenga had five tackles, including two tacklers for a loss and one quarterback sack.

“We were able to get a lot of pressure and create some different things. They do a lot of RPOs (run-pass-option), but we really created some havoc,” Kaminski said.

Madison East tried surprising Sun Prairie with an onside kick to open the game. However, the Cardinals were ready for it as senior Caleb Triebel recovered it at the 48-yard line.

“We actually talked about it, we just had a feeling,” said Kaminski. “They had three wins in a row and they feel like they’re going to take it to us, but we told them to be ready and not be surprised if they did try an onside.”

Eight plays later Schauer took a screen pass from junior Brady Stevens to the end zone for a 23-yard touchdown and 6-0 lead.

Sun Prairie struck again with 3:03 left in the second quarter when Stevens hit senior Dominick Landphier for a 51-yard score, upping the lead to 14-0.

Schauer capped off a six-play, 45-yard drive with a 1-yard plunge early in the second half. He finished the game with 75 yards on 14 carries.

Freshman quarterback Jerry Kaminski capped off the Cardinals’ scoring with a 1-yard run in the fourth quarter.

Landphier had a team-high 91 yards receiving on just two receptions, while Schaefer caught nine passes for 85 yards to raise his team-leading season total to 639.

Stevens missed just one pass, completing 10-of-11 throws for 172 yards and two touchdowns to raise his Big Eight-leading totals to 1,437 and 20, respectively.

Roh III finished with 309 yards passing, but threw a total of four interceptions. He and the Purgolders need to win their final two games to become WIAA playoff eligible.

“The loss last week hit us really hard, so we really wanted this one bad,” said Stone. “It’s the playoffs and we got it!”

It’s Homecoming Week and on top of that, Middleton Week as the Cardinals host their namesake.

“We have to worry about the football game,” said Kaminski. “All that other hoopla is just that. We know it’s going to be a rivalry game and a game that always is a slugfest.”