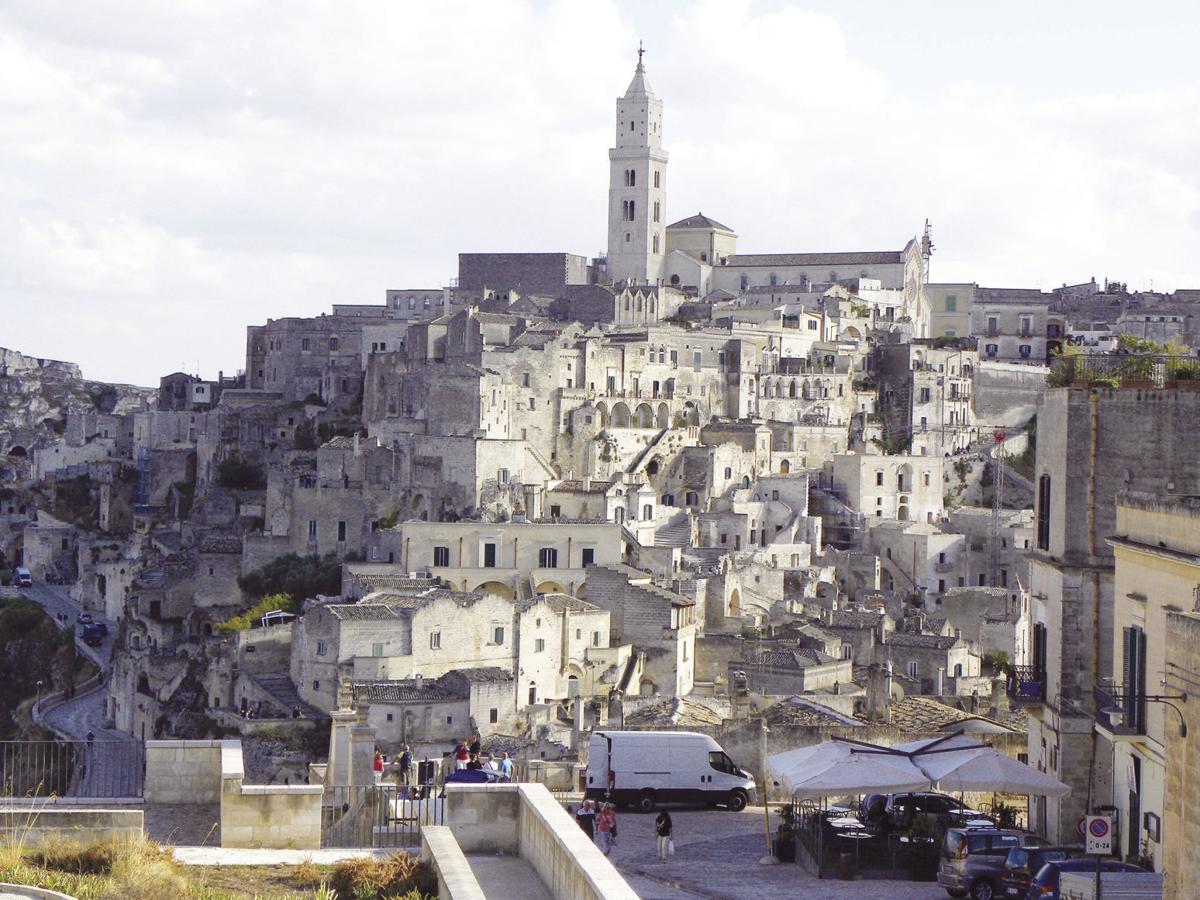 Ancient Matera, where the new James Bond movie was filmed, is jumble of caves, pathways, steps and mystery. 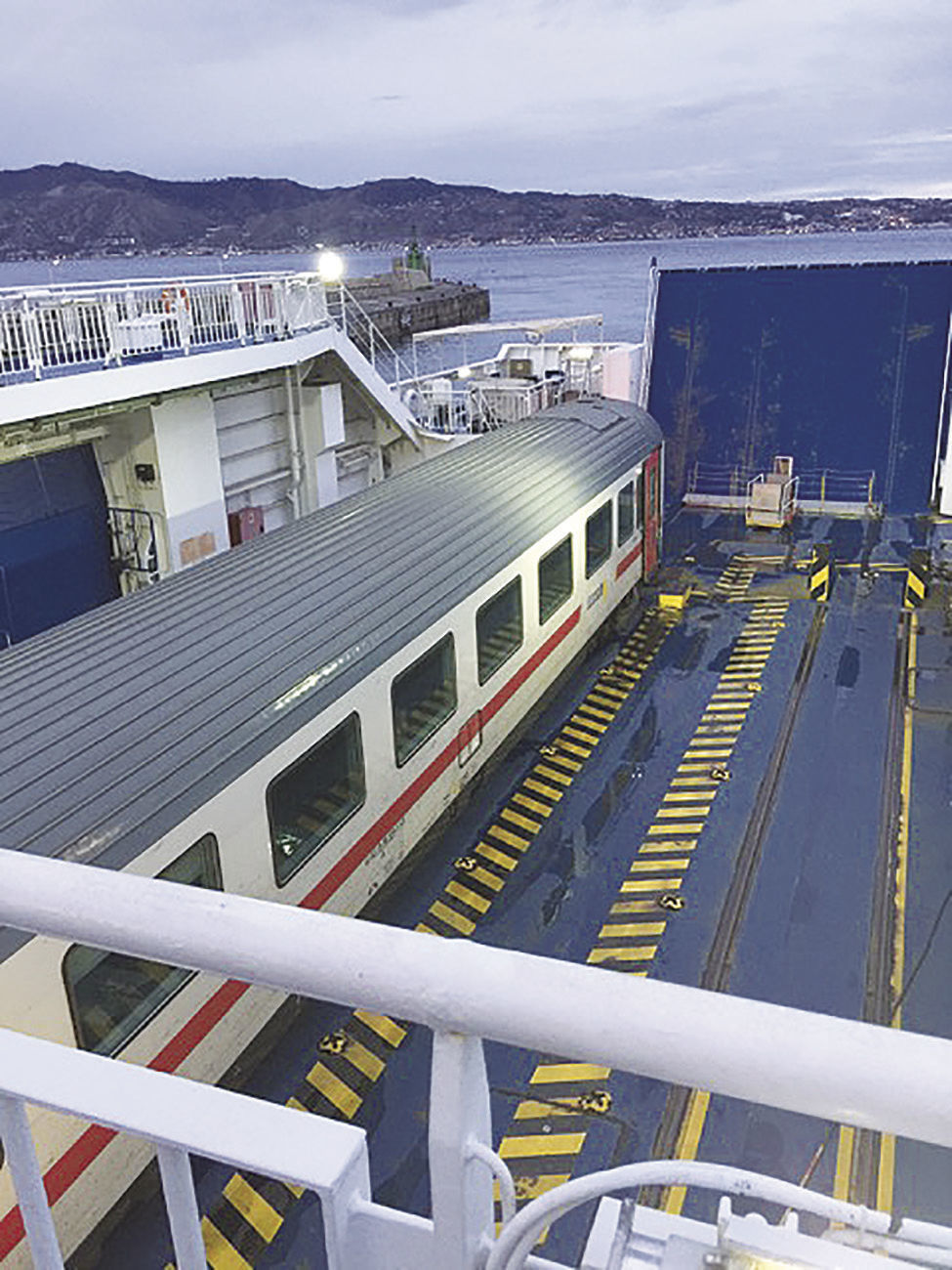 Train cars are loaded onto the ferry on the mainland and reassembled in Sicily. 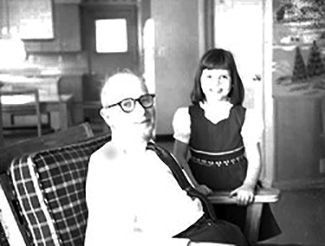 As a child, Debbie Meyer loved spending time with her grandfather, Ignazio Gagliano, who left his village of Santo Stefano at the age of 16 to build a new life in a new world. 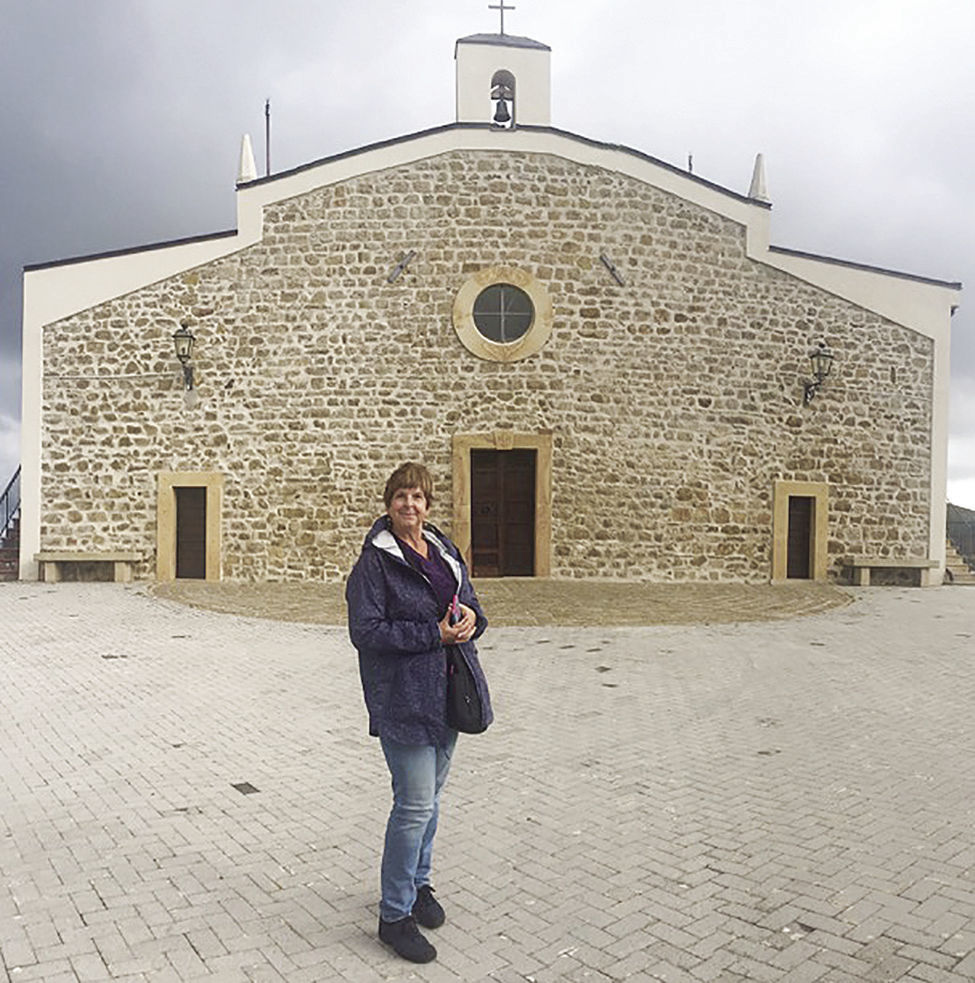 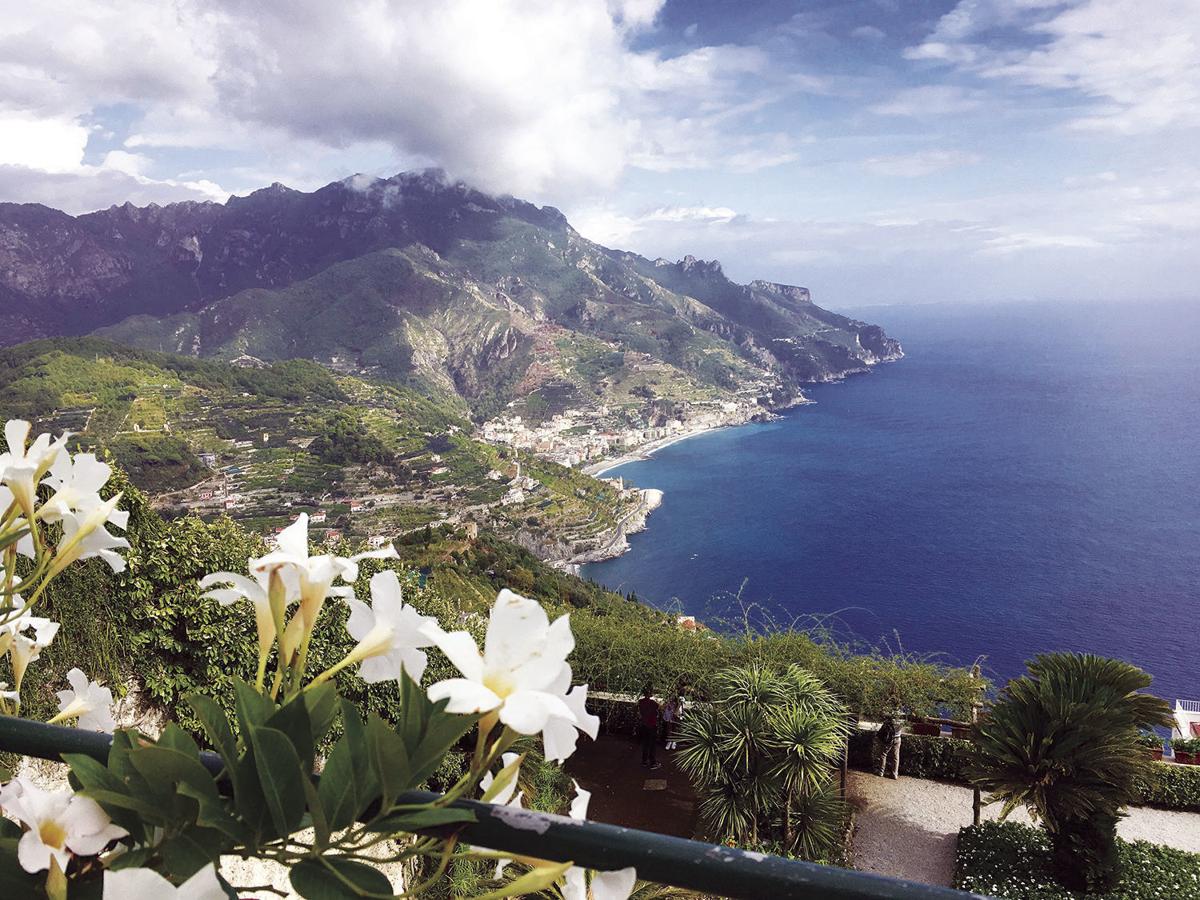 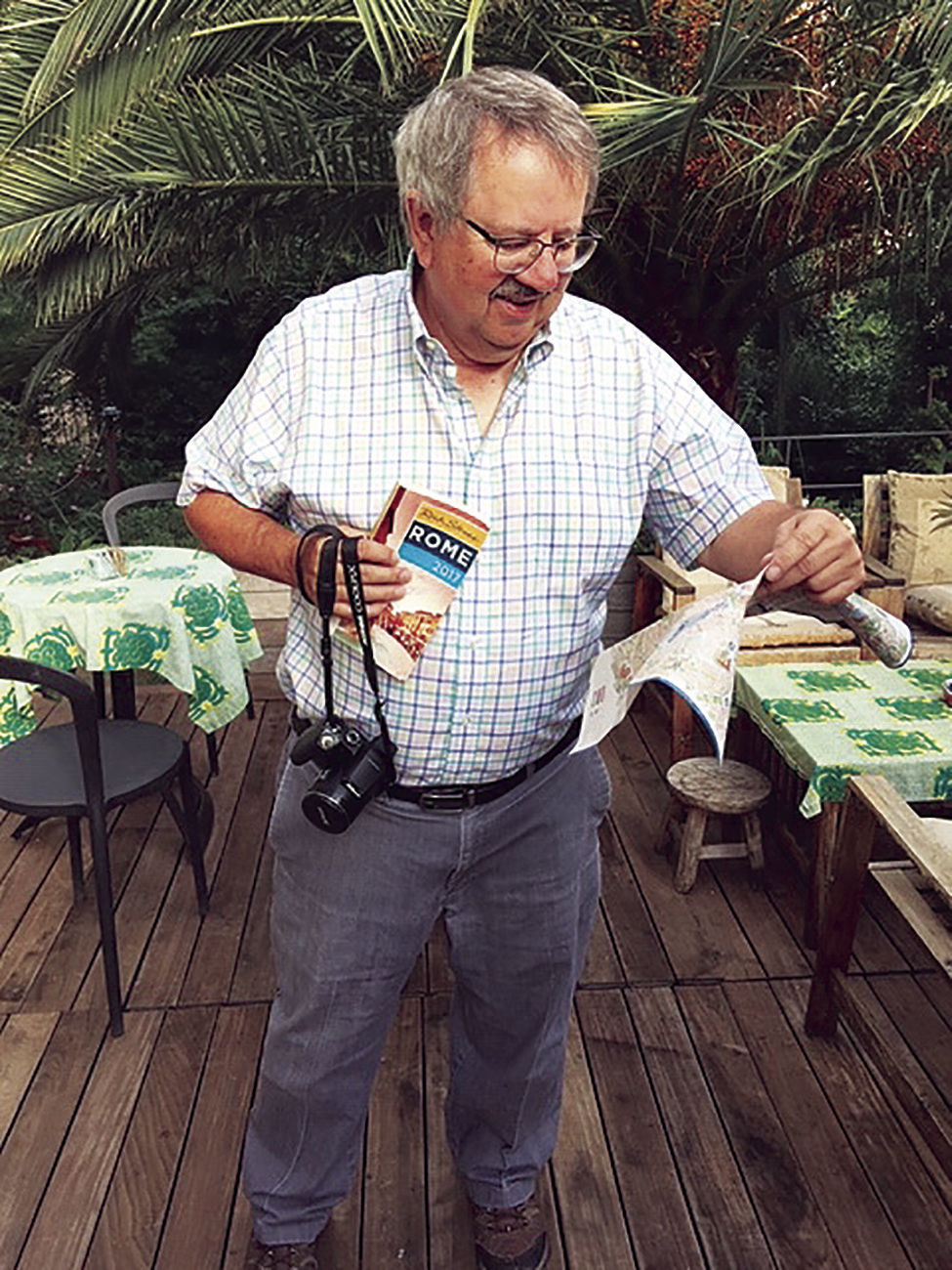 Glenn Schmidt prepares for a day of sightseeing in Rome. 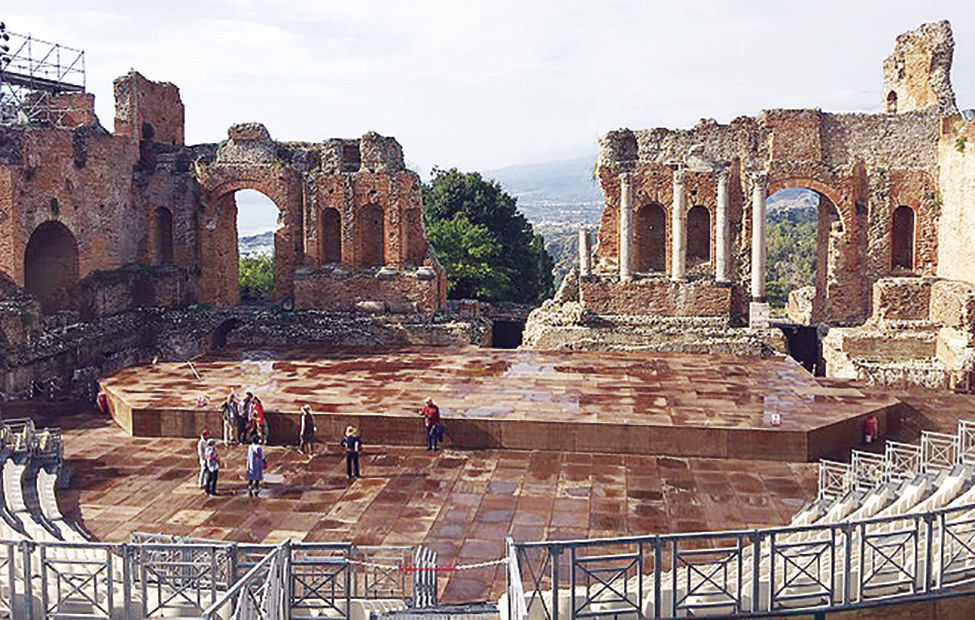 This ancient Greek Amphitheater in Taormina, Sicily is still used today for theatrical performances and concerts. 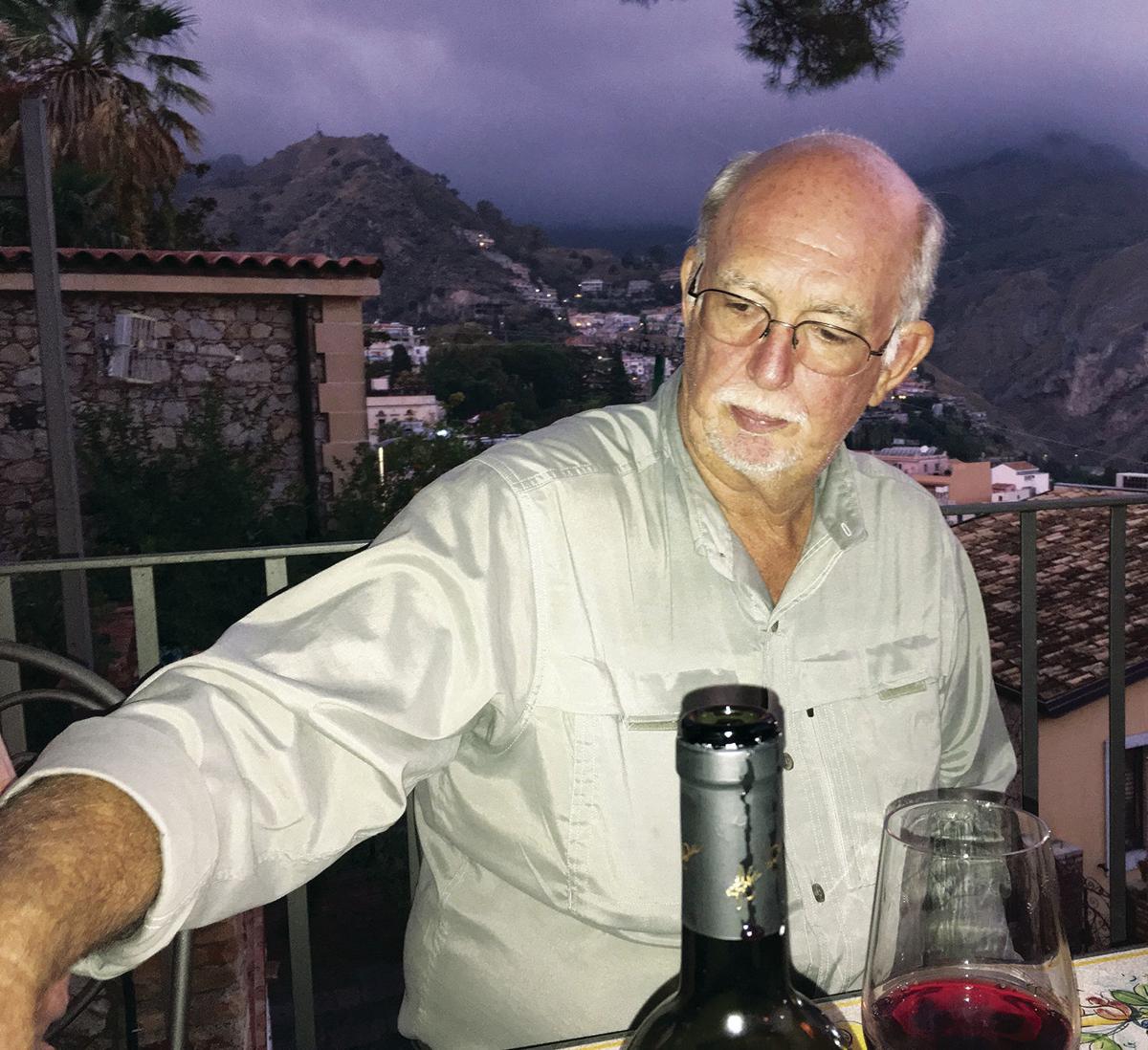 Steve Meyer pours another glass of wine while clouds descend on the Sicilian town of Taormina. He also Meyer savored the mussels in Trani, Italy, as “the best he’s ever tasted.” 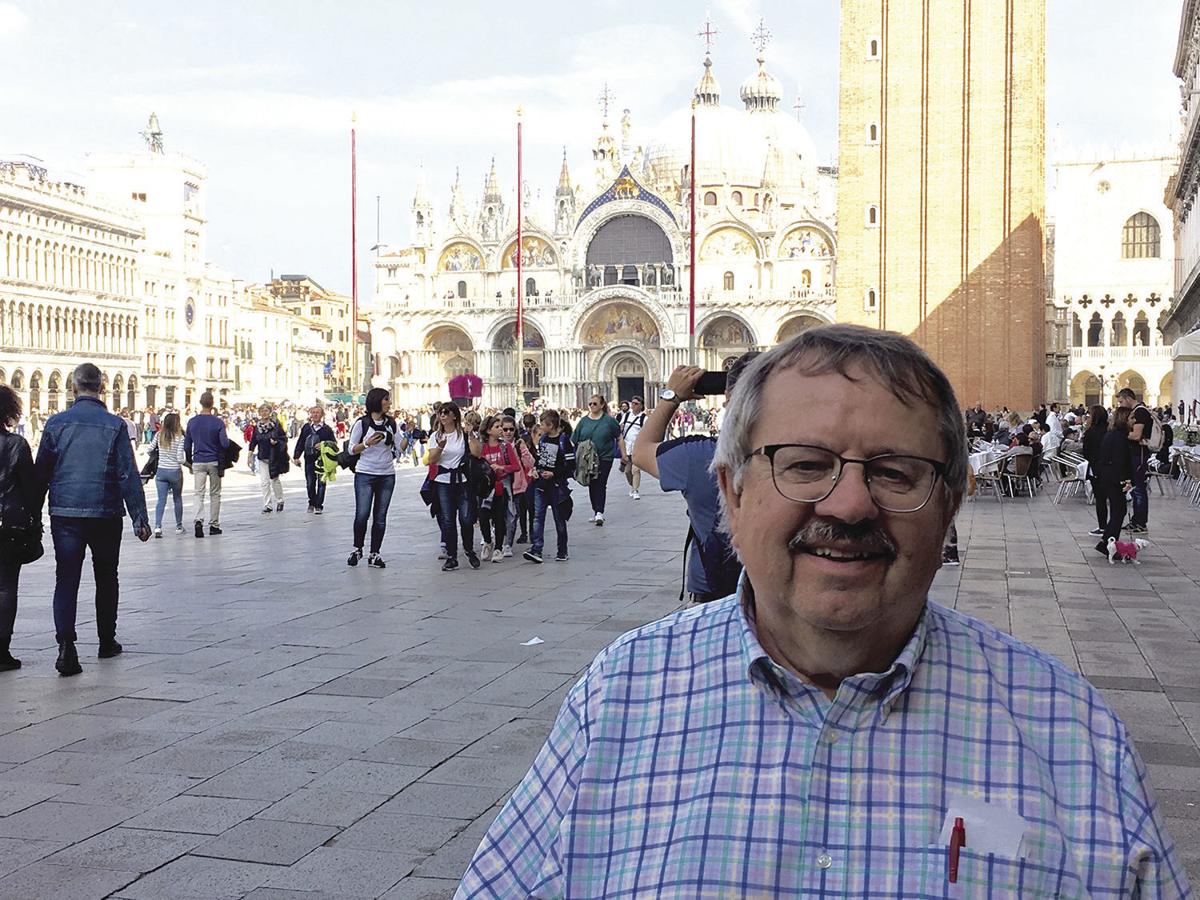 Glenn Schmidt takes in St. Mark’s Square in Venice in October (before the latest floods).

Ancient Matera, where the new James Bond movie was filmed, is jumble of caves, pathways, steps and mystery.

Train cars are loaded onto the ferry on the mainland and reassembled in Sicily.

As a child, Debbie Meyer loved spending time with her grandfather, Ignazio Gagliano, who left his village of Santo Stefano at the age of 16 to build a new life in a new world.

Glenn Schmidt prepares for a day of sightseeing in Rome.

This ancient Greek Amphitheater in Taormina, Sicily is still used today for theatrical performances and concerts.

Steve Meyer pours another glass of wine while clouds descend on the Sicilian town of Taormina. He also Meyer savored the mussels in Trani, Italy, as “the best he’s ever tasted.”

Glenn Schmidt takes in St. Mark’s Square in Venice in October (before the latest floods).

It’s a long way from Sun Prairie to southern Italy. For Debbie and Steve Meyer and Glenn and Kris Schmidt, the 16-day journey in October with friends spanned thousands of miles and more than 100 years.

Following is a question-and-answer discussion about the trip featuring Glenn, a veteran traveler and travel planner who has been to about 50 countries, and Debbie, who was on just her second trip overseas.

Q. Debbie, this trip was partly about finding your roots in Sicily. Did you find them?

Debbie: Absolutely. I set out in search of the village of Santo Stefano, on the northern coast of Sicily where my grandfather, Ignazio Gagliano, grew up. My goal was to wander through the same streets he knew so well as a young boy. I wanted to breathe in the sea air and take in the views of the Mediterranean Sea where he once fished with his father and brothers.

With the aid of a family biography, I was able to find not only his village, but also the small mountaintop church where he was baptized in 1888. It was an incredible moment I will always cherish.

Glenn: I love getting off the tourist path occasionally. While we were having lunch in Santo Stefano, the townspeople would wander past, giving us the kind of curious glances you never get where tourists congregate. It took us a half hour to drive to the mountaintop above Santo Stefano where Debbie’s grandfather’s church was. I can’t imagine how long it took them 130 years ago. They certainly built the church as close to heaven as they could get.

Q. Describe the planning process that went into your trip.

Debbie: I am a project-oriented person, and completely threw myself into helping with the planning of this trip. Once Glenn gave me a list of potential locations, I enjoyed hours of previewing accommodations, places of interest and local restaurants.

I also delved into learning to speak Italian, so I could communicate basic needs, get directions and of course order from delis or restaurants. I also familiarized myself with euros and cultural differences we might encounter.

Glenn: We flew United direct from Chicago to Rome, about 8.5 hours. On the way home, we also flew direct, clearing customs at O’Hare then flying to Madison. I put a lot of time into the hotels and apartments we rented, with an emphasis on location.

The Borgobeltrani Hotel in Trani, on the Adriatic coast, was so central that athletes in the annual Night Run pounded away under our balcony for what seemed like hours. The hotel was ranked number one by TripAdvisor, my most indispensable tool in selecting the places. Debbie turned out to be a natural at travel planning. As a direct result of her research, we spent a delightful afternoon of wine tasting at the Gambino Winery on Mount Etna.

Q. Your itinerary took you to Rome, Sorrento, Taormina (Sicily), Venice, Matera, Trani, and Bari. Which one impressed you the most?

Debbie: Sorry, can’t pick just one. Rome was incredible and larger than life in so many ways. Sorrento and the Almafi Coast were breathtaking. But if I had to be specific about the most impressive areas we visited I would include the ruins of Pompeii, the ancient Greek amphitheater in Taormina, and the stunning cavernous mountain village of Matera, which is where both, The Passion of the Christ, and the new James Bond movie were filmed.

Glenn: Matera. The pictures I saw ahead of time didn’t do justice to the ancient jumble of caves, rock, and mystery. It looked like an MC Escher print, with stairways to nowhere and impossible passages. Our maps and GPS units were useless. I had to ask three different inhabitants to direct us to the main square.

Q. Did all your many transportation connections work out? What did and didn’t?

Debbie: Yes, most of the time. However some presented more of a challenge than our group would have liked.

Our scheduled five-hour train ride from Naples to Taormina, Sicily started well as we successfully rendezvoused with another Sun Prairie couple, Brion and Cathy Pagel. But it stretched into a 10-hour trip due to an earthquake in the outlying area.

On the plus side, when our train arrived at the tip of the Italian boot, they took the train cars apart, loaded them onto a ferry, then reassembled the train across the bay.

Glenn: Our unexpectedly late arrival at the train station in Taormina, Sicily was greeted by darkness, a driving rain, and an empty taxi stand.

I hate renting cars, but both times we did it, it turned out well. At the Avis office two blocks from our Taormina hotel, I assumed command of an imposing Mercedes station wagon with a standard transmission. Steve was a little reticent about driving at first, but I never drove another mile once he slid behind the wheel two hours later.

Debbie: He was a pretty happy guy. Seriously, how can you have a bad meal in Italy? We made it a point to seek out restaurants that the locals enjoyed as often as possible.

One of the things I discovered is that most restaurants offer house red and white wines that are both delicious and inexpensive. Steve loves fresh seafood, and in Italy, it’s plentiful. He claimed he had the best mussels he’s ever tasted when we dined in Trani.

Crusty bread is another favorite food group of Steve’s. One morning in Matera, three of us made a run to a local bakery. It was bread heaven, filled with the fragrance of mountains of freshly baked breads and rolls. We returned to our apartment with several loaves of crusty local perfection, which Steve enjoyed immensely with his morning cappuccino.

Steve: Once I ordered a pasta course with sea urchin and octopus, which our waiter nervously accepted. After we had eagerly polished it off, he shared with us that this was the dish most often sent back to the kitchen by foreigners. He was obviously very proud of the food he served and truly happy when we enjoyed our meal. Debbie ate her own way around the country. Her goal was to eat a cannoli every day she was there. Every. Single. Day. And, she did.

Glenn: I’ve never eaten better on a trip. In Sorrento, we ate at a restaurant that made us feel like we were in a terrarium. Steve had gotten a tip from a taxi driver that a fish called pezzogna was the thing to order. It wasn’t on the menu. When Steve asked the waiter about it, they were suddenly best friends and the waiter started bringing us dead fish to look at before their transformation in the kitchen.

Q. What were your basic costs for the trip? Did you add any luxuries?

Debbie: We stayed at a combination of hotels and rented apartments. I was surprised at how reasonably priced accommodations were in Italy. I think our most expensive hotel room was $150/night.

We focused on three or four-star properties, usually in the center of town. The hotels provided wonderful European style breakfasts. Mid-afternoon we stopped for a beverage of choice and a snack, which curbed our appetites until our late dinner.

If we splurged on anything it was probably our dinners. As foodies, we wanted to try new foods and wines, and did so at every opportunity.

Glenn: I’m a sucker for splurging on a great view. The top floor, three-bedroom apartment we rented through Booking.com in Sorrento had a deck overlooking the magnificent Bay of Naples with Mount Vesuvius looming over it.

Each bedroom cost $132 per night when we broke it down, so maybe it doesn’t qualify as a splurge, especially considering that the hotel down the street with the same view charged about $500 per night for a room.

Trip costs were $936 for air, about $900 apiece for accommodations, and about $600 for internal transportation and tours. You can buy a cheap tour for less than $2400, but you probably won’t end up in front of your grandfather’s church on top of a mountain.

Q. Looking back, what would you change?

Debbie: This trip was an incredible experience. However, if I were to do it over again I would probably visit fewer places and stay longer in each one. We only had one day in Rome and a few hours in Venice between flights. I could easily spend a few weeks simply romping through the hills and valleys of Sicily.

Glenn: Europe’s cheap airlines entice you into doing unusual things, such as the Venice stopover Debbie mentioned. I’ve been to Venice before and the best time to experience it is in the morning before the crowds come and in the evening when the reflections give it a magical touch.

Instead, we mainly fought the crowds at St. Mark’s Square (before the most recent flooding) and tried to avoid getting lost (although getting lost is the point of Venice).