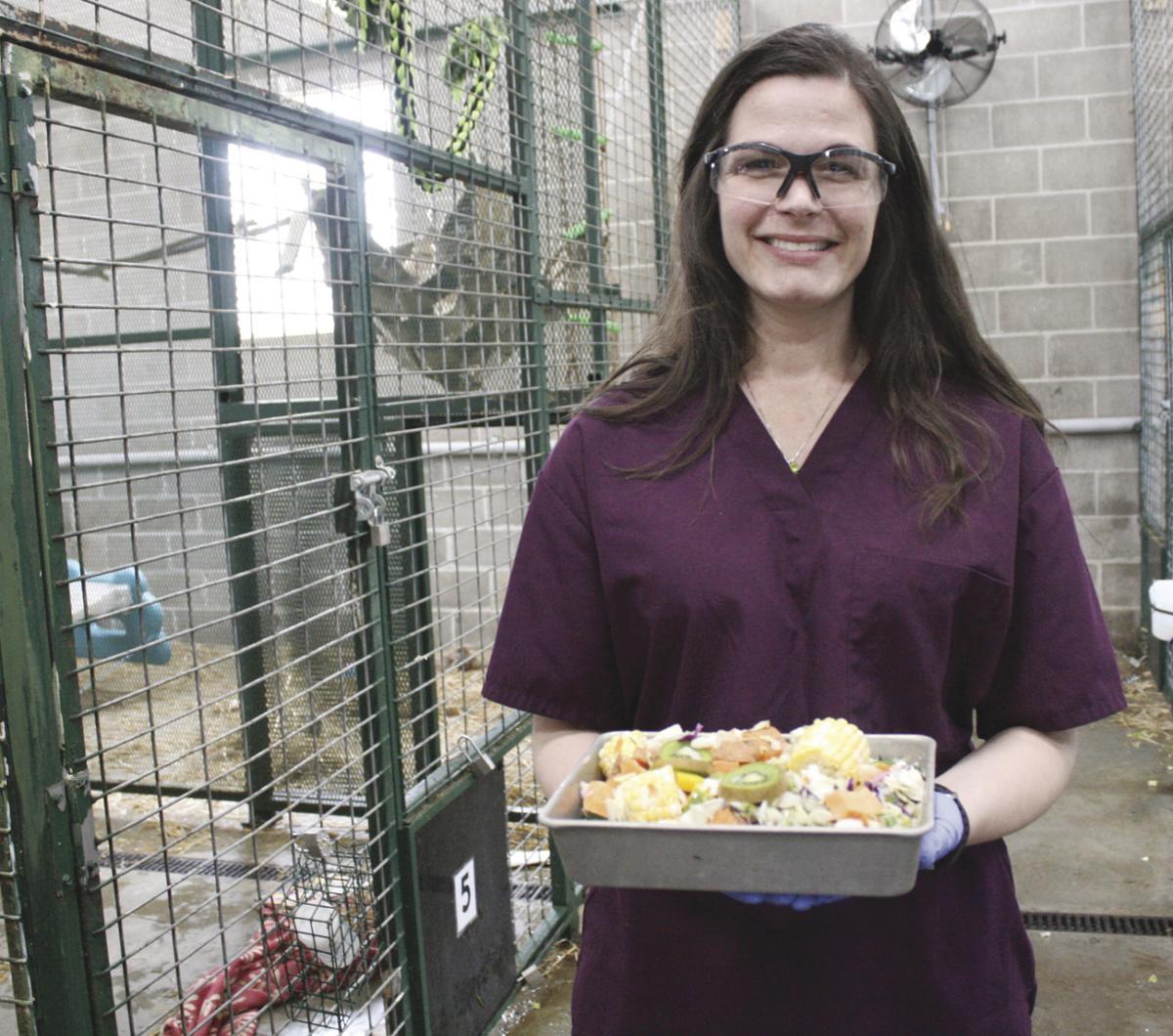 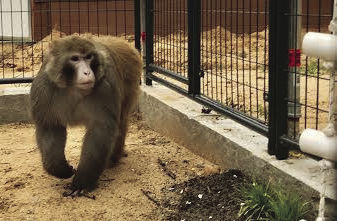 Mars, a rhesus macaque, is just one of the retirees of Primates Inc. 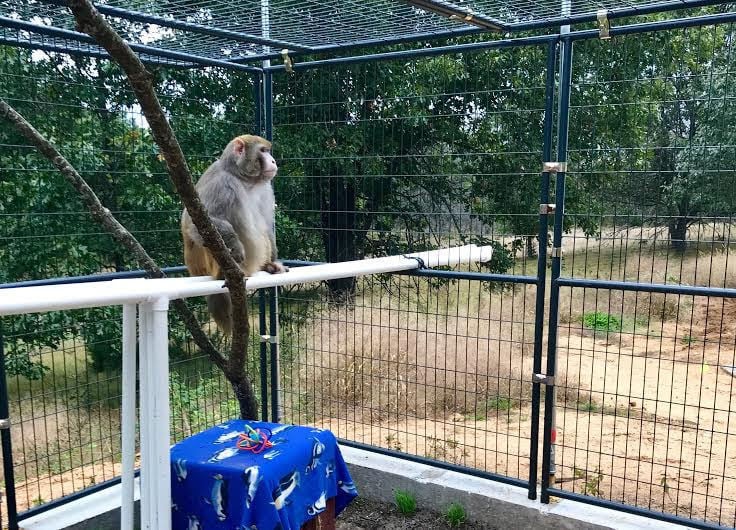 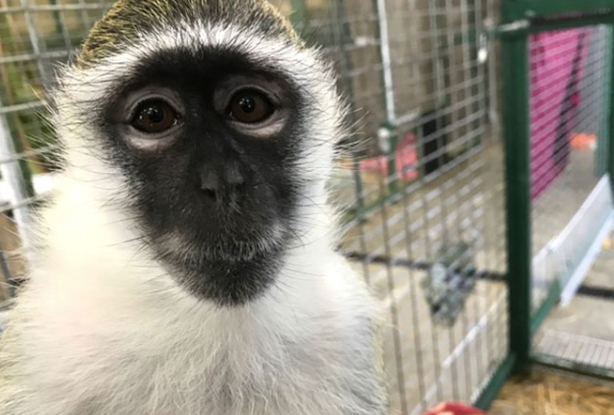 Bella, a pet who was surrendered by her owner, is a 17-year-old vervet monkey. 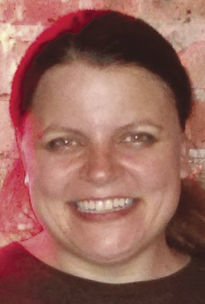 Mars, a rhesus macaque, is just one of the retirees of Primates Inc.

Bella, a pet who was surrendered by her owner, is a 17-year-old vervet monkey.

River playfully peeks from underneath his blanket to catch the eye of visitors, quietly sitting in his outdoor enclosure.

Izzle uses his mirror to get a look at someone’s face, shying away from direct eye contact and when Mars saw his first hummingbird flittering outside, he was mesmerized.

Sun Prairie resident Fallon Mullen counts River, Izzle, Timon, Mars, Batman, and Bella, as some of the most intriguing characters in her world.

“Really something happens every day that makes your heart smile or surprises you when working with these monkeys,” said Mullen, the Animal Care Manager at Primates Incorporated.

Primates Inc. is a sanctuary for research monkeys, and the ones who find a spot at the rural 17-acre facility, in the Town of Springfield in Marquette County, are considered lucky.

There are more than 110,000 monkeys involved in research in the U.S. according to the United States Department of Agriculture (USDA). If the study doesn’t end in the monkeys’ death, they are turned over to another research project.

Mullen, a 2003 Sun Prairie High School grad who worked in a research laboratory previously, was torn between a job that provided a paycheck and seeing the impact the research was having on the animals.

“Working at the lab was definitely difficult for me,” Mullen said. “But I loved working with the monkeys and I offered them the best animal care that I could to make sure that they were happy as possible.”

After working with monkeys both in a research lab and a Louisiana sanctuary, Mullen started volunteering with Primates Inc. in 2013, and then eventually landed a staff job—where finally she was able to turn around the lives of former research monkeys.

“They are cared for every day and they are loved immediately,” she says. “And once they start to trust their caregivers, the wall comes down and you bond right away.”

Doing more for the monkeys

Amy Kerwin was an up-and-coming undergrad with an eye on veterinary school when she got a job as a research assistant at the Harlow Center for Biological Research at the University of Wisconsin-Madison.

Kerwin was well liked and was promoted to a full-time research specialist, became more involved with the monkeys and attempted to implement practices for better care. But when she brought up the subject about retiring monkeys, she was labeled as an animal activist and was restricted from coming into the lab after-hours and on weekends.

Realizing that she wasn’t going to change the lab management’s mind about primate care and possible retirement, in July 2004 Kerwin started Primates Inc. and resigned from her UW-Madison position after working there for five years.

Kerwin earned an MBA and visited sanctuaries, with the goal to open up a sanctuary herself. After 15 years of working on the plan and raising more than $385,000, Primates Incorporated opened its doors in 2018, welcoming six monkeys to the facility.

At Wisconsin’s only primate sanctuary, Kerwin, who is the Primates Inc. Executive Director, is creating a model that others can follow when establishing a cold climate facility.

There’s an all-weather main enclosure and four outdoor enclosures where the monkeys can go back and forth from inside to outside—as long as it’s 55 degrees or warmer. This winter, Kerwin hopes to open two geodomes that will allow the primates to get sunlight year-round.

“It is more extensive to set up a sanctuary in Wisconsin, rather than Florida, but I thought we really need to do it because there is such a need to help monkeys,” Kerwin said.

Izzle, River, Mars, Batman, Timon — all rhesus macaques — range from 6 years old to 15. Bella, a pet who was surrendered by her owner, is a 17-year-old vervet monkey. The sanctuary focuses on retiring old world monkeys because Kerwin said those are the species most rejected from sanctuaries.

Kerwin estimates that it costs around $12,000 a year to retire a monkey. The five rhesus monkeys at Primates Inc. were laboratory favorites, with researchers getting close to them and that accounts for why they are at the sanctuary.

But, Kerwin said, many more can be retired.

“Whether they are named River or No. 47, all monkeys are deserving of retirement,” Kerwin said.

There’s a lot of hurdles to retiring monkeys, Kerwin said, including cost, labs that don’t believe in retirement, distrust of sanctuaries and the care they give primates. Because of the high demand for research monkeys, and convenience—it’s just easier to euthanize them.

The Chimpanzee Health Improvement, Maintenance and Protection (CHIMP) Act signed into law in 2000 allows federal funds to retire chimps used in research. Kerwin would like to see that law amended to include all monkeys.

“It is a real challenge for labs—they are getting their livelihood and careers out of these monkeys but yet they can’t set aside $12,000 for retirement,” Kerwin said.

Kerwin’s focus has been to work with the nine other sanctuaries in the United States that are retiring monkeys. She also continues to connect researchers who are interested in retiring their monkeys with other laboratories that have.

Since the six monkeys have arrived at Primate Inc. and the word has gotten out, Kerwin has heard from more labs that want to retire their monkeys.

“The trend is on the rise,” Kerwin said, “and we are thankful for that.”

Primates Incorporated just received its USDA approval, following strict guidelines on how to care for the monkeys, and also has North American Primate Sanctuary Alliance accreditation.

Kerwin has hired Mullen, a UW-Madison zoology grad who previously worked with primates at the Louisiana based-Chimp Haven, and a primate behavioral/welfare manager to make sure the monkeys are being cared for properly and studied.

The monkeys have a very regimented diet that includes mostly produce (vegetables, fruits, leafy greens), supplemented with chow biscuits—and on recipe day they get noodles—which Mullen says is a real treat for them.

Mullen notes the intelligence of the monkeys. For example, River will seek out his food puzzle, intently trying to solve it before he gets his treat—even though there is food scattered about his enclosure.

Their “furniture”— benches and play sets — are rotated in the enclosures to keep the environment ever-changing with music and TV playing in the background. Mullen said holidays are a big thing—-the monkeys get to unwrap boxes and find treats and new toys inside.

The rhesus monkeys at Primate Inc. have previously only known life in a solitary cage, but are responding to their new world and are being paired up with others for companionship.

Once data on the six retirees is gathered and analyzed, Kerwin plans to share it with researchers. That may open the door for other laboratories to retire their monkeys.

“If they can see the successes, hopefully, they will change their policy on retiring monkeys,” Kerwin said.

“It’s the little moments like that take your breath away,” Mullen said.

For the first time since Primates Incorporated opened, the general public will be able to see the monkeys themselves and learn more about their care.

A ribbon-cutting ceremony/open house will be held from 11 a.m.-3 p.m. on Saturday, June 29 at the W8782 County Road M in Westfield. Visitors will be able to view the monkeys from a distance, check out the volunteer and education center, and walk the nature trails around the facility. The event is family-friendly and free, but donations are appreciated.

This summer is also the launch of Sunday afternoon supervised tours of the facilities by appointment for up to 10 people. Mullen said the goal is to educate the public but also not to disrupt the monkeys.

Kerwin, whose main focus is raising money to keep the facility going and growing—up to 100 monkeys someday—is looking for contributions from corporations, local businesses and individuals.

Bob Barker, the Price is Right host and animal advocate, donated more than $244,000 to Primates Inc. Locally, Mari and Patrick Buchholz of Cottage Grove donated money in 2013 to help purchase the land for Primates Incorporated. Others have donated items and their time to launch Primates Inc. — something that Kerwin is grateful for.

With the Primates Inc. opening, Kerwin feels her hard work is paying off.

“I do this in honor of the 97 monkeys that I could not help,” Kerwin said. “That is what keeps me going.”