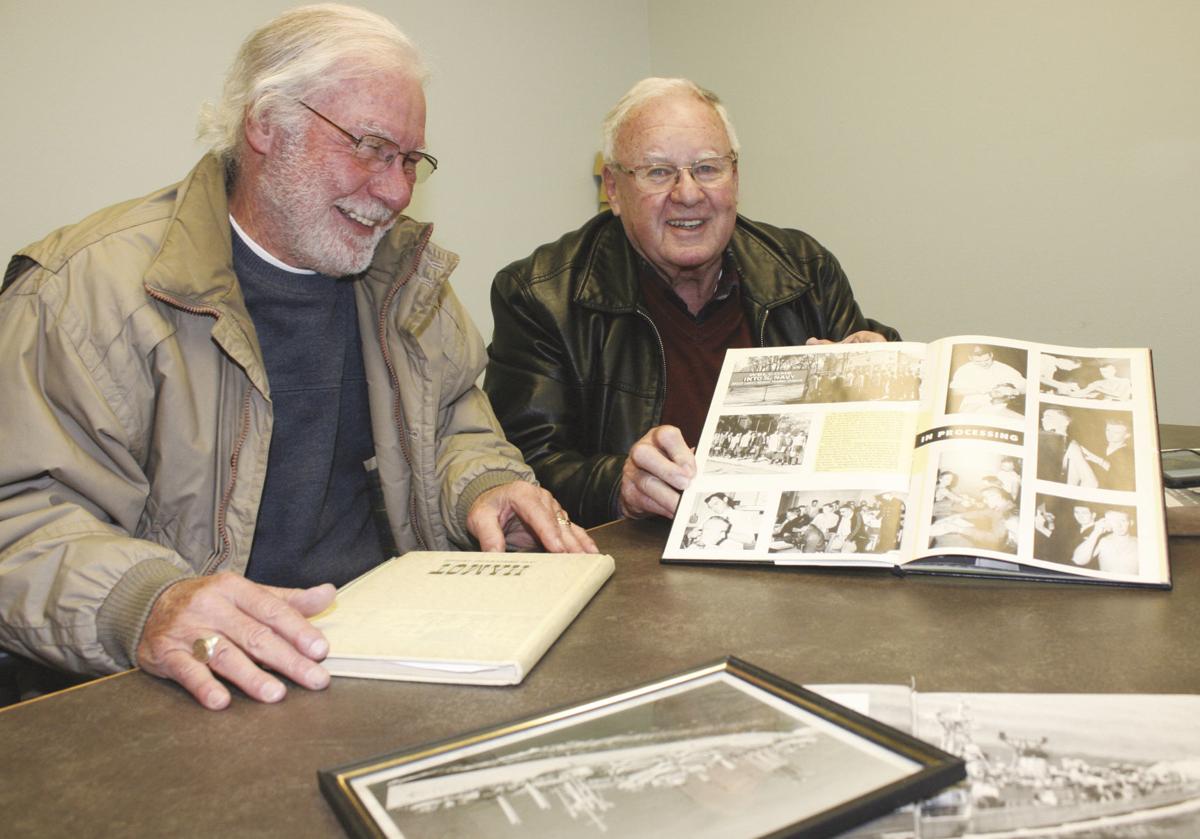 Dave Richmond (left) and Sy Heilman share a laugh while they look over photos from their time in the Navy. The two were part of a group of 15 teens from Tomah who joined the Navy together in 1955. 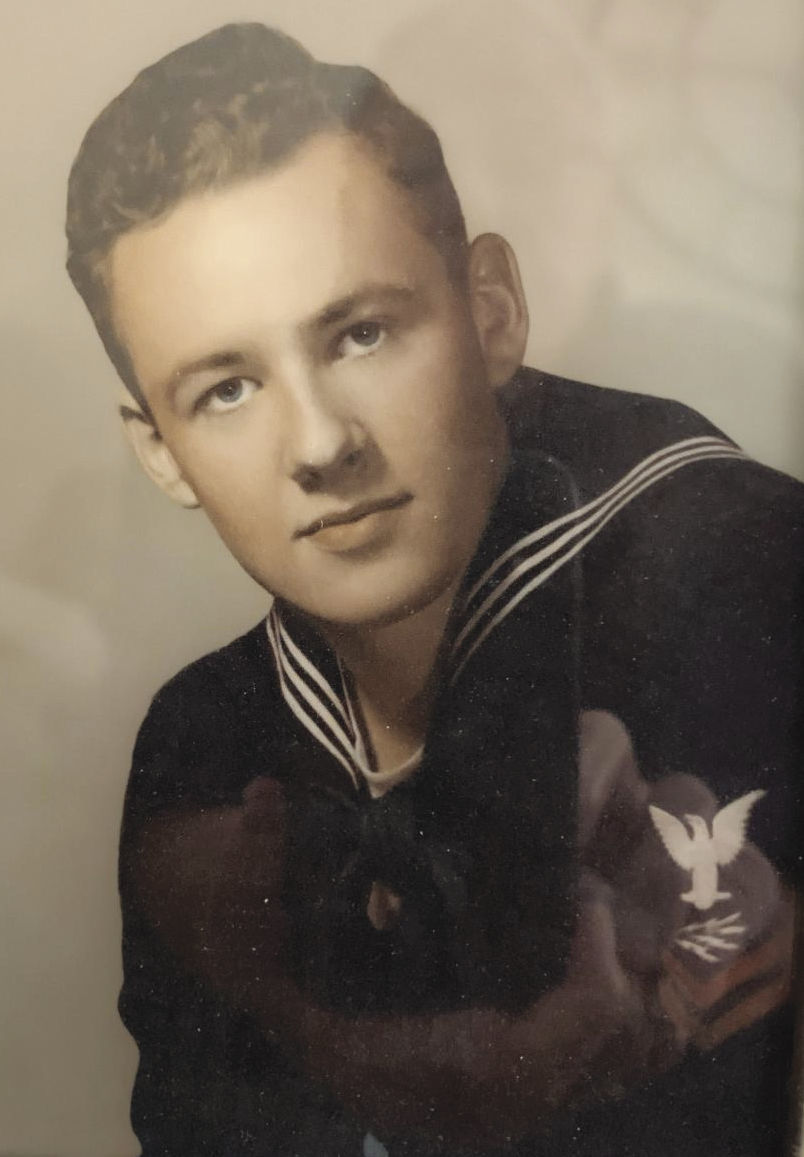 Sy Heilman had his eye on joining the military for years and organized a group of his Tomah High School classmates to join the Navy. 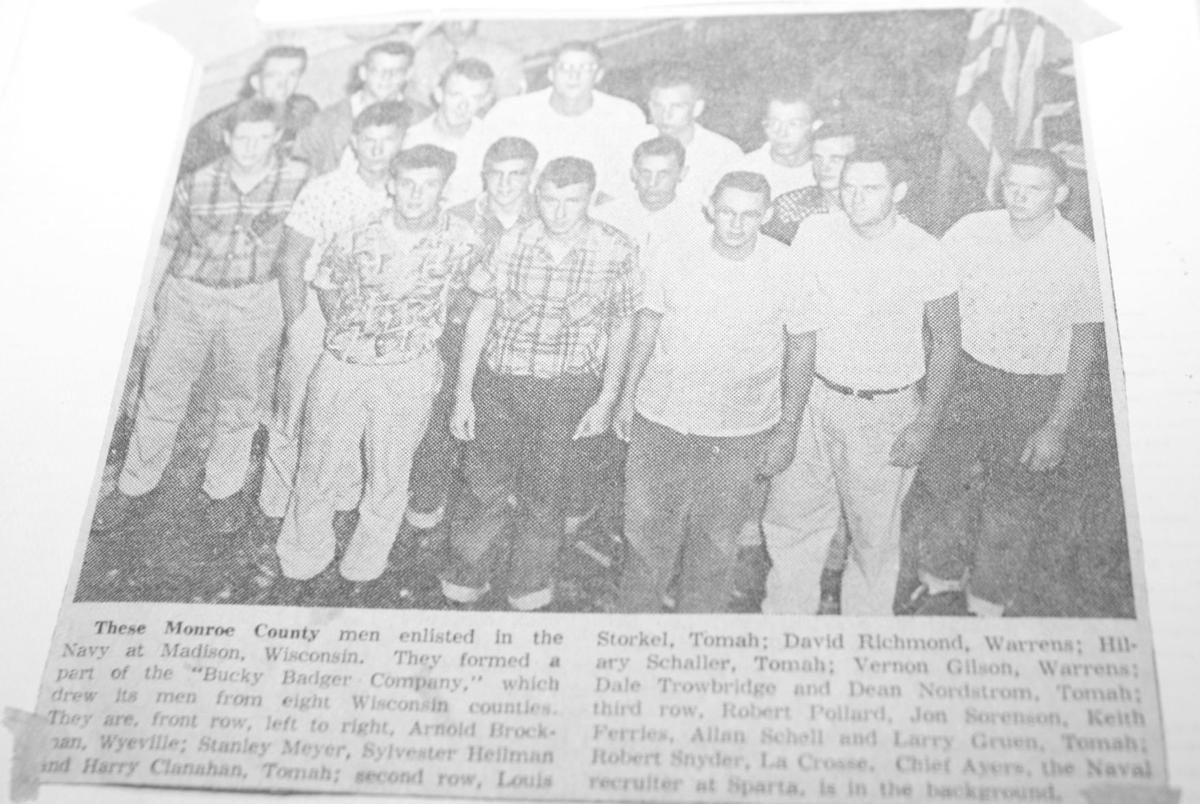 Sy Heilman helped persuade 14 of his Tomah High School classmates to join the Navy with him in 1955. Heilman, now a Sun Prairie resident, said the teens wanted the adventure and travel that the Navy could provide.

Dave Richmond (left) and Sy Heilman share a laugh while they look over photos from their time in the Navy. The two were part of a group of 15 teens from Tomah who joined the Navy together in 1955.

Sy Heilman had his eye on joining the military for years and organized a group of his Tomah High School classmates to join the Navy.

Sy Heilman helped persuade 14 of his Tomah High School classmates to join the Navy with him in 1955. Heilman, now a Sun Prairie resident, said the teens wanted the adventure and travel that the Navy could provide.

A bunch of teen boys hanging out on the street corner of a small Wisconsin town is nothing unusual.

But when Sy Heilman flagged his friend Dave Richmond passing by in a car, it was about to change both their lives.

Heilman had his eye on joining the military for years and organized a group of his Tomah High School classmates to join the Navy.

“Sy stopped me and told me to come, that is would be an adventure,” Richmond remembers, parking his car and going along. “Sy had it planned it out for two years and I had two minutes to make a life-changing decision.”

The two teens knew that they were off on an adventure.

Neither saw opportunities in the small Wisconsin town where there wasn’t much going on. Heilman didn’t want to go into his father’s bakery business and Richmond just saw a future of dead-end jobs ahead of him.

But the Navy meant training and travel.

“I wanted to get out and see the world,” said Sy, who is now 82-years-old and lives in Sun Prairie.

Along with 13 of their Tomah classmates and other recruits from central Wisconsin, they became part of the All Wisconsin Company 347 on June 29, 1955, and went through boot camp at Naval Station Great Lakes.

The ship was smaller than other vessels in the Navy fleet—it was designed to be fast maneuverable action on the seas. Heilman lived with hundreds of other sailors who were expected to live efficiently in the space given—a compact bunk and a tiny locker.

The crew didn’t have modern satellite technology to avoid storms, so the ship would be tossed around the sea during turbulent weather. Heilman said it was so bad a couple of times that he thought the USS Zellars might sink. But they survived the storms, with the only casualties being the equipment on board.

“During one storm a typewriter broke loose from its post and when a wave hit, it flipped over itself and kept rolling across the floor,” Heilman recalls. “Nobody got up to retrieve it—we were just hanging on for dear life—but that typewriter never did work again.”

The USS Zellars was Heilman’s home for 39 months sailing from the Arctic Circle with NATO cruise operations and making ports of call in Ireland, the Netherlands and throughout the Mediterranean Sea.

The US Navy sailors were greeted with friendly smiles when they disembarked into port, except for the countries that had ties to the Soviet Union—it was the Cold War after all.

“Sometimes we would see “Yankee go home” signs when we got in port, and we thought maybe we shouldn’t get off the ship because there might be trouble, but that was the exception,” Heilman remembers.

The young sailor would soon be transferred to the destroyer USS Mullinex, spending four months in South American waters.

The “Tomah 15” were separated after boot camp, and Richmond was assigned to the USS Montrose, an attack personnel transport Navy vessel. The USS Montrose could carry up to 1,500 Marines, who practiced landing drills off the ship’s sides climbing down rope webbing and onto waiting boats.

“It was just like in the old movies,” Richmond remembers. “We hauled the same Marines around so many times we got to know some of them on a first-name basis.”

For the Wisconsin teens who grew up in a small town, the Navy was an eye-opener.

Heilman remembers a time when he was at Norfolk Naval Base in Virginia.

He caught a city bus and got comfortable in the back seat. The bus driver began to yell at him “Sailor, get upfront where you belong” and stopped the bus in the middle of the street and refused to go until Heilman followed the command. The young sailor noticing as he inched forward the white line along the bus floor that separated white folks from black folks.

“I was in shock,” Heilman remembers. “Coming from Wisconsin you didn’t go along with that, but that was the segregation of the south in the 1950s.”

The people in Asia who lived in poverty struck Richmond the most. He would see people gathering near the Hong Kong coasts, shifting coal out from the waters where it had fallen off the pier. Richmond also remembers a local woman, “Hong Kong Mary”, who would scavenge through the military chow hall garbage cans for food to take home to her family.

Both Heilman and Richmond say they adapted easily to life in the military. Richmond said shoes had to be spit-shined, hats worn just right, bunks made up with no wrinkles in the sheets—all to enforce conformity and discipline.

“Life aboard ship was pretty routine,” Richmond said. “We did our job and tried to make things run smoothly.”

Heilman advanced so quickly in ranks to a first-class radioman that he even thought about making a career out of the military. But he decided against it.

“Things went really well for me in the Navy, so I wanted to see what I could do on the outside, Heilman recalls thinking.

Soon after Heilman was discharged in June 1962, Heilman married Sherry and the couple eventually had two sons and one daughter.

He made a career in the computer industry working for more than 40 years at Burroughs Corporation and Unisys.

Richmond embarked on a teaching career after he was discharged from the Navy. After he received his degree, he started teaching in a two-room country school and soon moved to other schools. He worked his way up to principal, and then school superintendent at the Waterford School District, before retiring and become a trustee and village president for the village of Waterford. He married his wife Marge in 1965 and has two daughters.

Richmond, now 82, said the skills he learned in the military set him up for his career.

“Being in the Navy taught me how to get along with different people and work with them,” Richmond said. “It was life-learning skills that set me up for life after the Navy.”

Seven out of the “Tomah 15” are still living and Richmond and Heilman, who live a mile apart in Sun Prairie, see them occasionally at class reunions.

Decades later, Richmond still remembers being on the USS Montrose deck with the other sailors during morning call, looking out into the ocean.

“It was a reminder that we were part of a ship in a great Navy and part of a great nation, “he said.