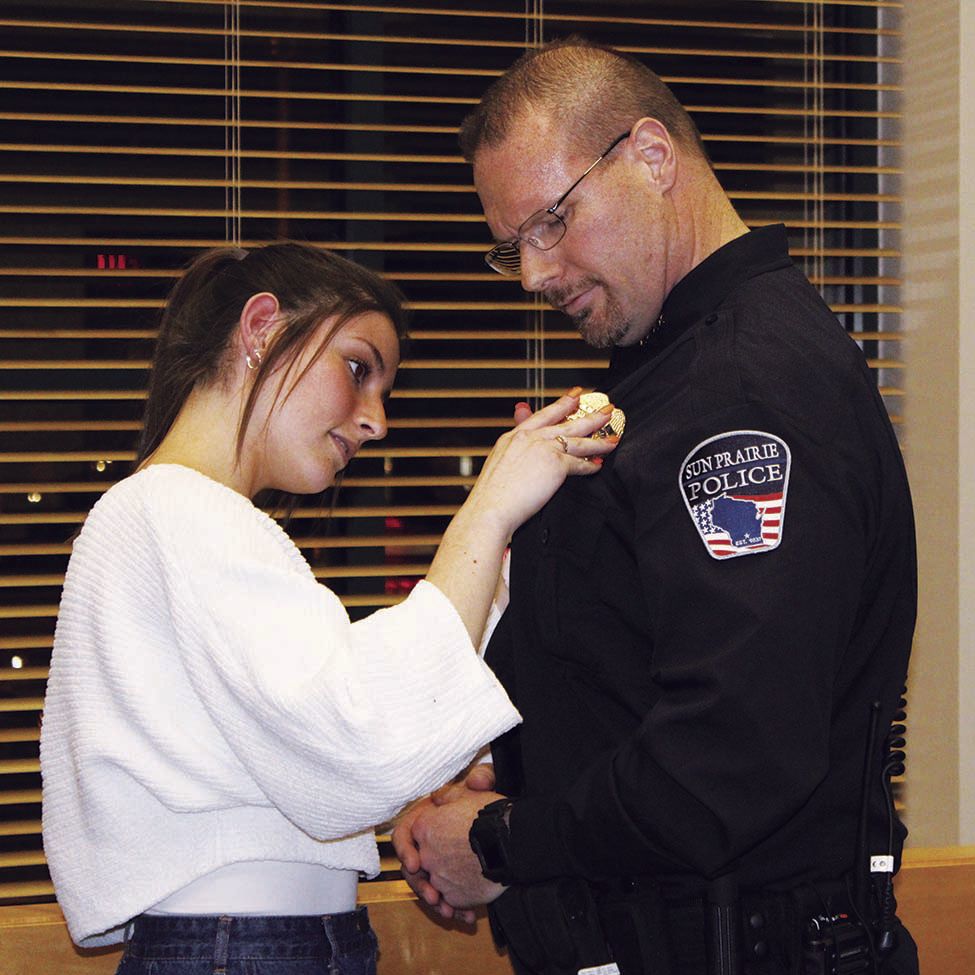 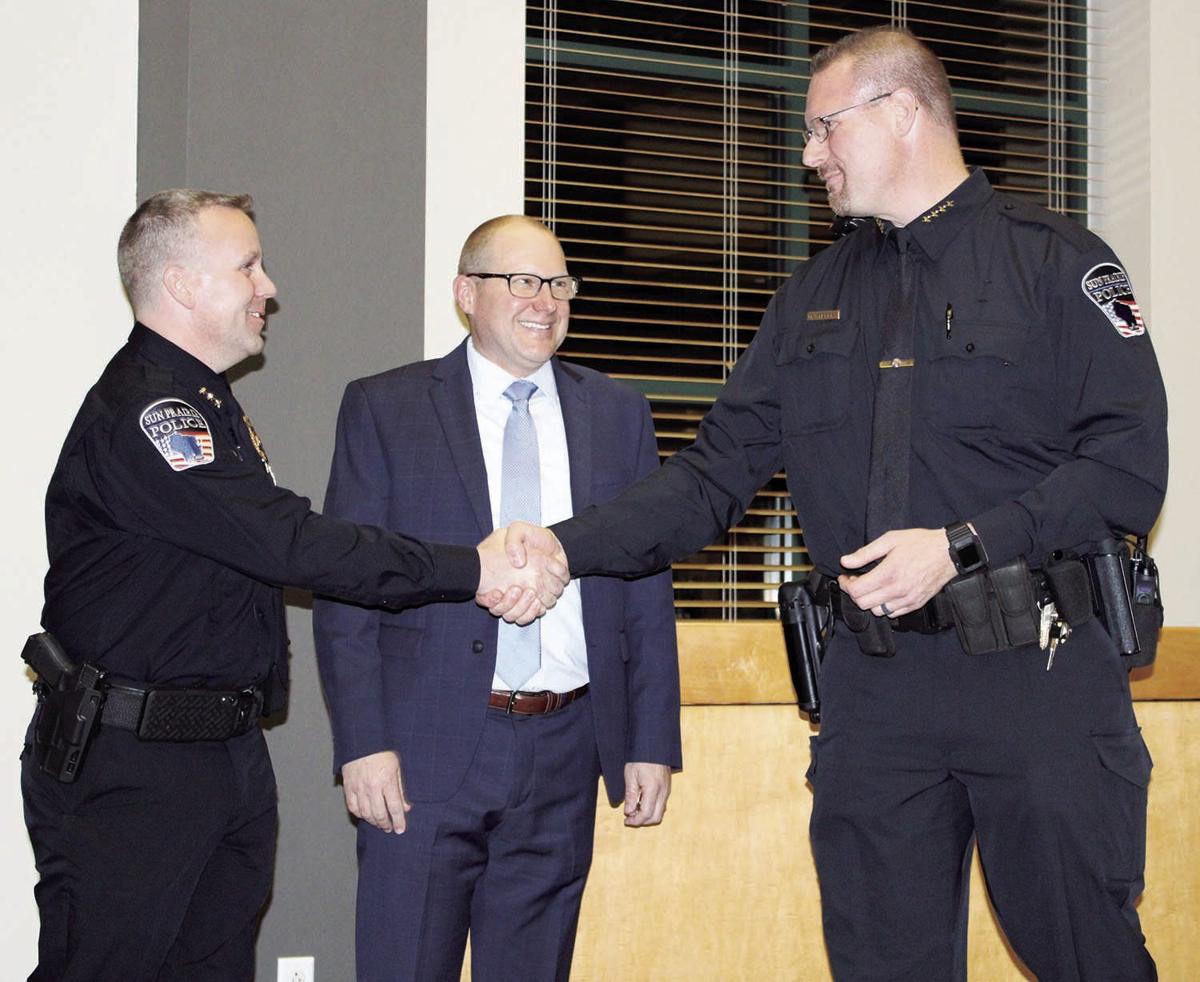 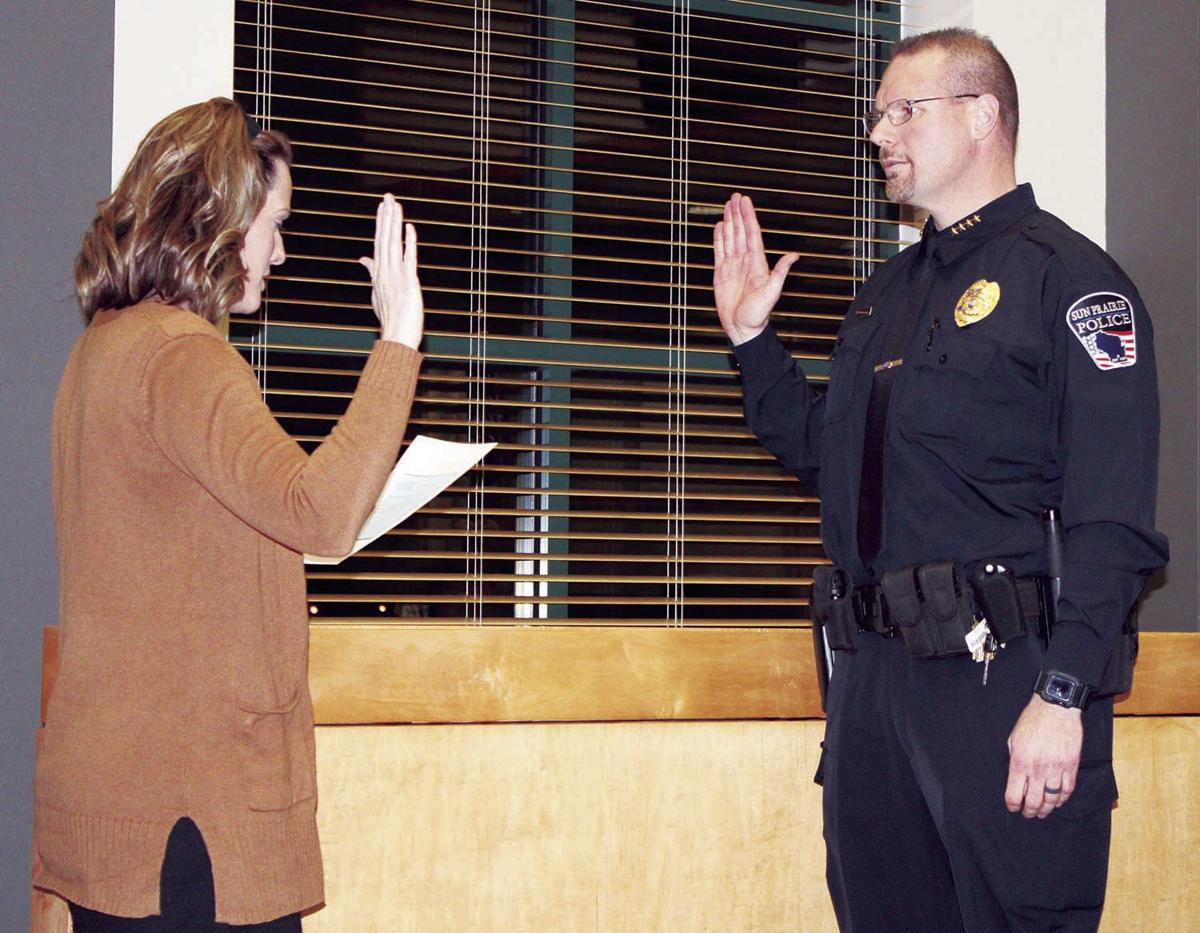 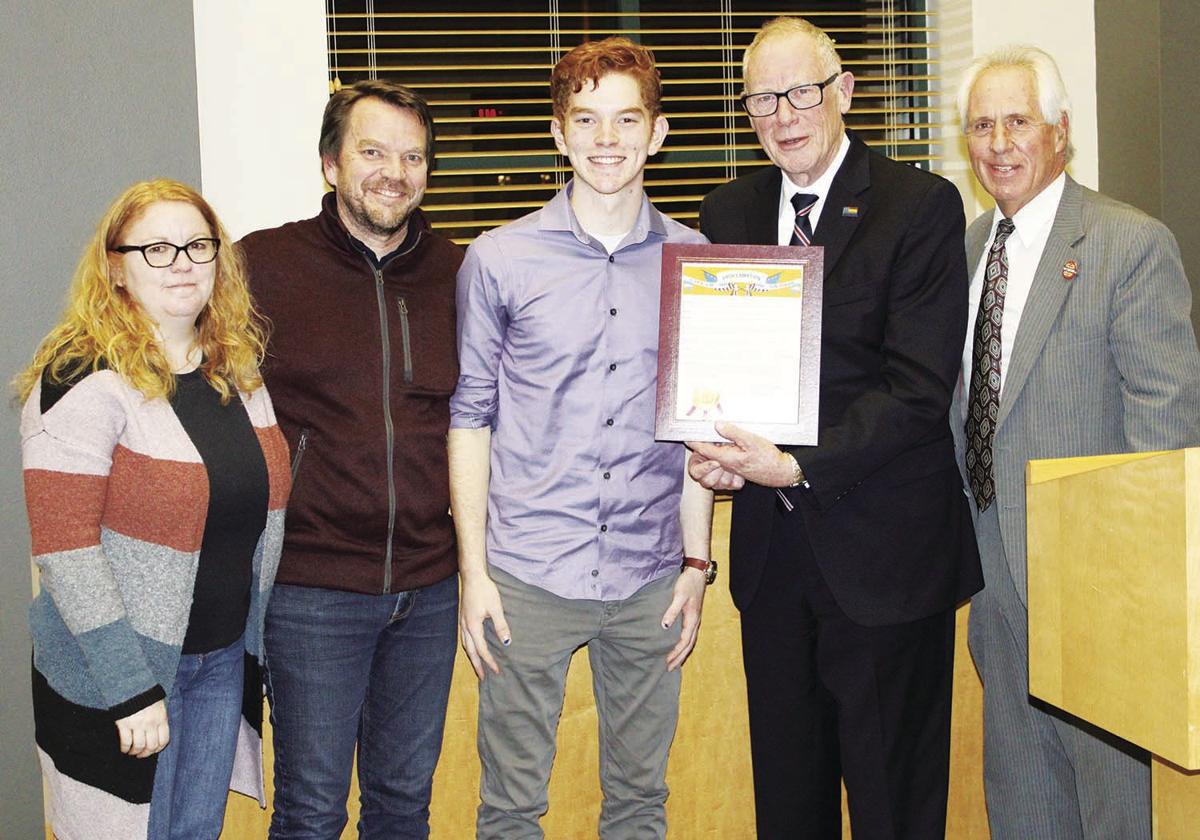 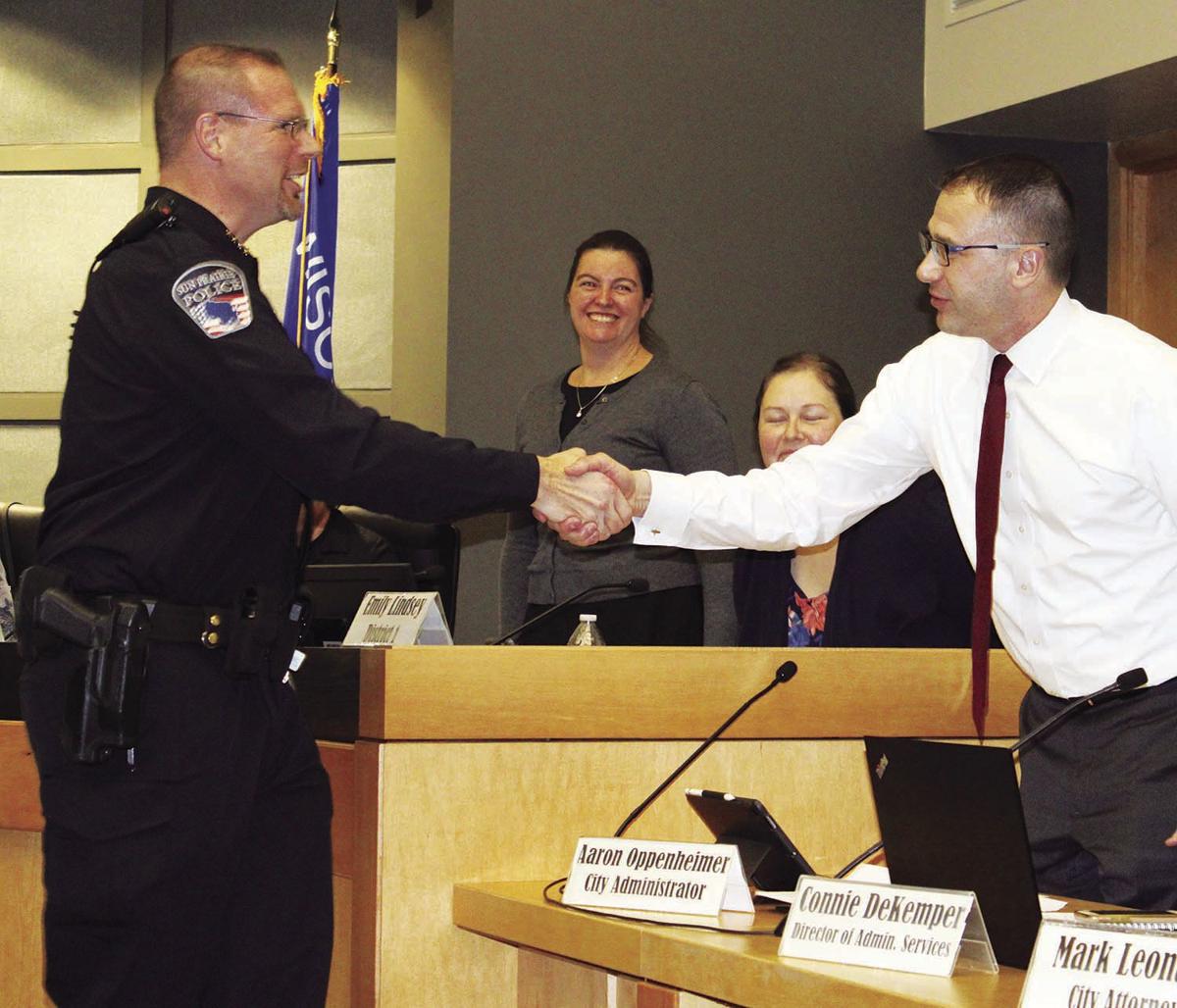 At the meeting, Steffes took the ceremonial oath of office from Deputy City Clerk Jennifer Wood, and participated in a badge pinning ceremony featuring his daughter, who recently enlisted in the Army.

But Steffes — who was officially sworn in and began his new position Dec. 30th — also had kind words for his parents, his wife, fellow Sun Prairie police officers who attended the badge pinning and ceremony and previous Acting Chief Brian Teasdale as well as his predecessor, Patrick Anhalt, who was also on hand at the council meeting (watch the video of the pinning and Steffes’ remarks, and a separate video saluting Teasdale at sunprairiestar.com).

Esser also explained that he first met Chief Steffes at the Incident Command Center during the response to the July 10, 2018 natural gas explosion in downtown Sun Prairie that claimed the life of Sun Prairie Fire Capt. Cory Barr and destroyed four commercial buildings and a single family home.

Esser said he was impressed by the resources Steffes offered from the Wisconsin Department of Justice, and that Steffes was fortunate to have applied for the job of chief of police. He explained that two other Department of Justice personnel who volunteered during the explosion response have been appointed to other governmental entities in the city, and that now, Steffes’ “number was up” in being the new chief (view all of Esser’s remarks in the same video at sunprairiestar.com). Esser said Steffes’ appointment as chief relieves Steffes from serving on any boards or commissions.

The event concluded with Steffes shaking hands with the city council and receiving the oath of office from Wood.

Thanks largely to neighbor and District 1 Alder Steve Stocker, Aidan Schutter received recognition in the form of a mayoral proclamation recognizing his accomplishments as a former member of the Sun Prairie High School boys tennis team.

Schutter became the first Sun Prairie Boys Tennis Player to finish the season on the podium, placing fourth at the State Finals in May 2018; and ended his Sun Prairie High School Tennis career as the record holder for most wins at #1 singles with a record of 98 wins.

A four-year team captain, Schutter was also a two-time All-Area first Team selection, made three appearances in the round of 16 at the State Finals and graduated as an AP Scholar with Distinction and is currently attending and playing tennis at Whitman College in Walla Walla, Wash.

This fall, Schutter received the Frank Parker Junior Award from the Wisconsin United States Tennis Association, which presents the award annually to recognize one outstanding male and female from Wisconsin who best displayed good sportsmanship on and off the court and served the interests of tennis.

Schutter thanked his parents, his neighbor Stocker, everyone at Sun Prairie High School and the council and Esser for the recognition (watch the video on the Sun Prairie Star website in the Videos section at sunprairiestar.com).

Stocker asked Transit Commission Chair Al Guyant to examine any possible alternatives to Madison Metro bus service after Metro imposed an estimated increase of between $10,000 and $11,000 to provide service to Sun Prairie.

After an accelerated timeline in May to construct a Metro transit station and encountering larger-than-anticipated costs for the construction of the park-and-ride lot, service began in August with a ribbon cutting ceremony at the lot located near the corner of O’Keeffe Avenue and Reiner Road.

“I don’t know how the other council members felt, but I was a little PO’d, when I found out about this,” Stocker said. “It’s almost like we’re being held hostage by Madison Metro.”

While agreeing the timing of the increase was not ideal, City Administrator Aaron Oppenheimer said he believed the city’s increase will be able to be accommodated through fares. Oppenheimer also pointed out Sun Prairie’s increase is not as great at Middleton or Verona’s — an estimated $50,000 to $60,000.

Stocker asked Guyant to examine other alternatives for service, including the possibility of contracting with Kobussen Bus Company and even approaching the Colonial Club about the use of its mini-bus.

Guyant said he does not want to cut service because the current Metro ridership for the looped bus service into Madison and back to the city’s park and ride lot averages about 100 riders per day.

Guyant said he would accept the request as a referral to the commission and talk with City Planner Phil Gritzmacher Jr. about the possible alternatives and costs associated with alternative transit service options.