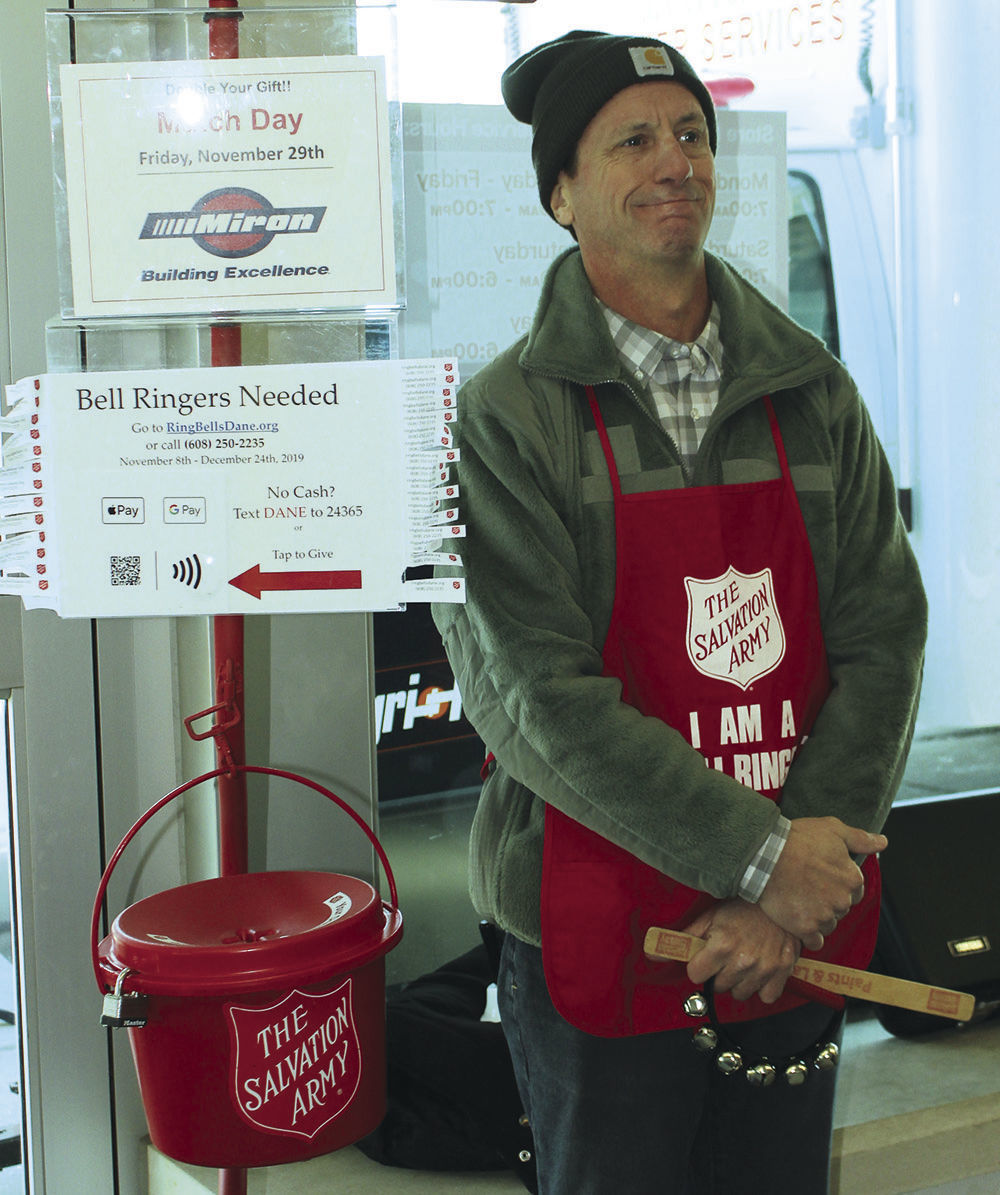 Christopher Kearney rang in the 2019 red kettle campaign for The Salvation Army Dane County on Friday, Nov. 8, at Blain’s Farm and Fleet on South Stoughton Road in Madison. The goal is to raise $600,000 before Dec. 24. 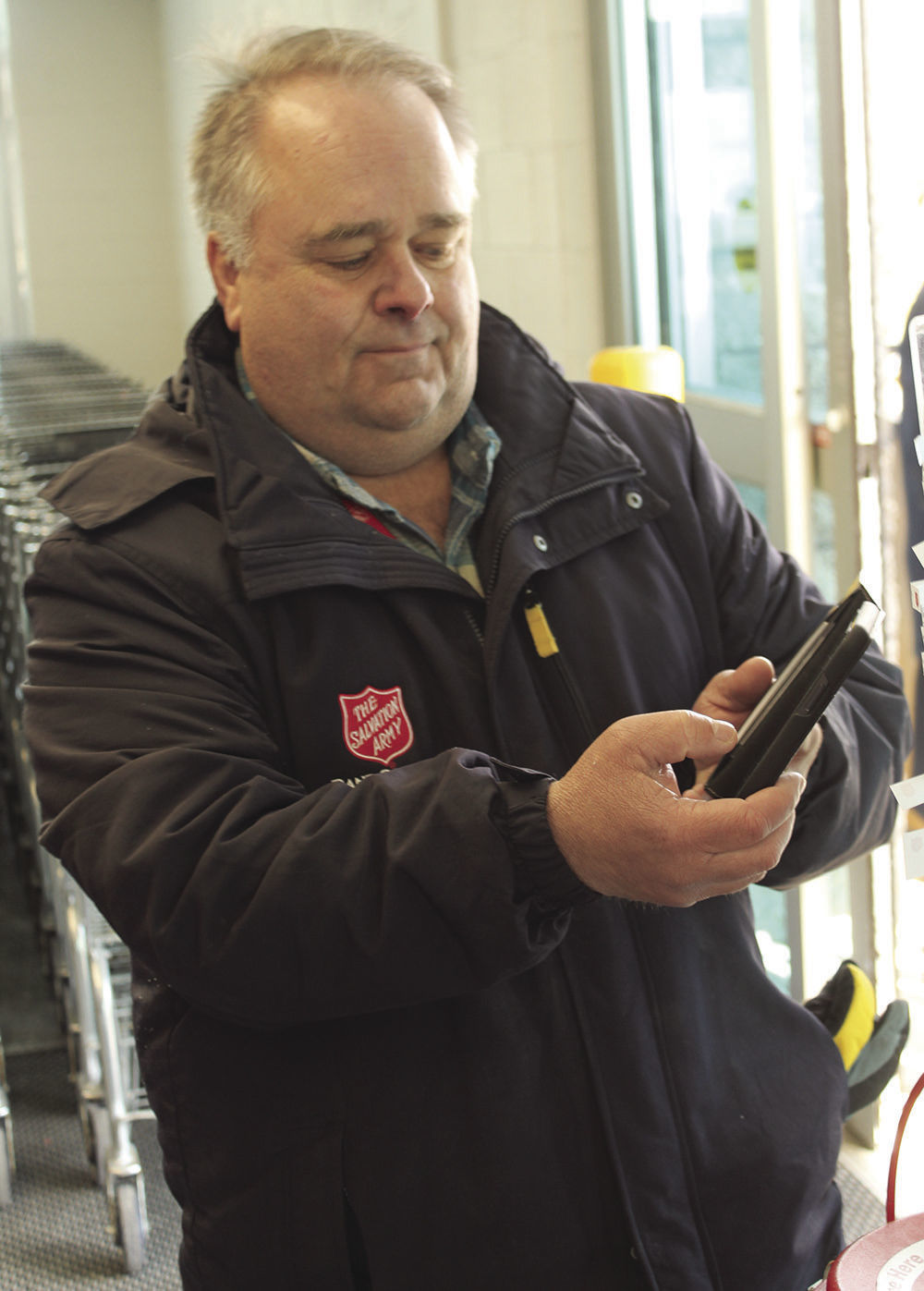 Steve Heck, director of operations and development for The Salvation Army Dane County, discusses the many ways to give during the annual red kettle campaign. In addition to cash and checks, people can give online, through mobile apps, with Google Pay and Apple Pay, with a QR code, by text and by credit card. 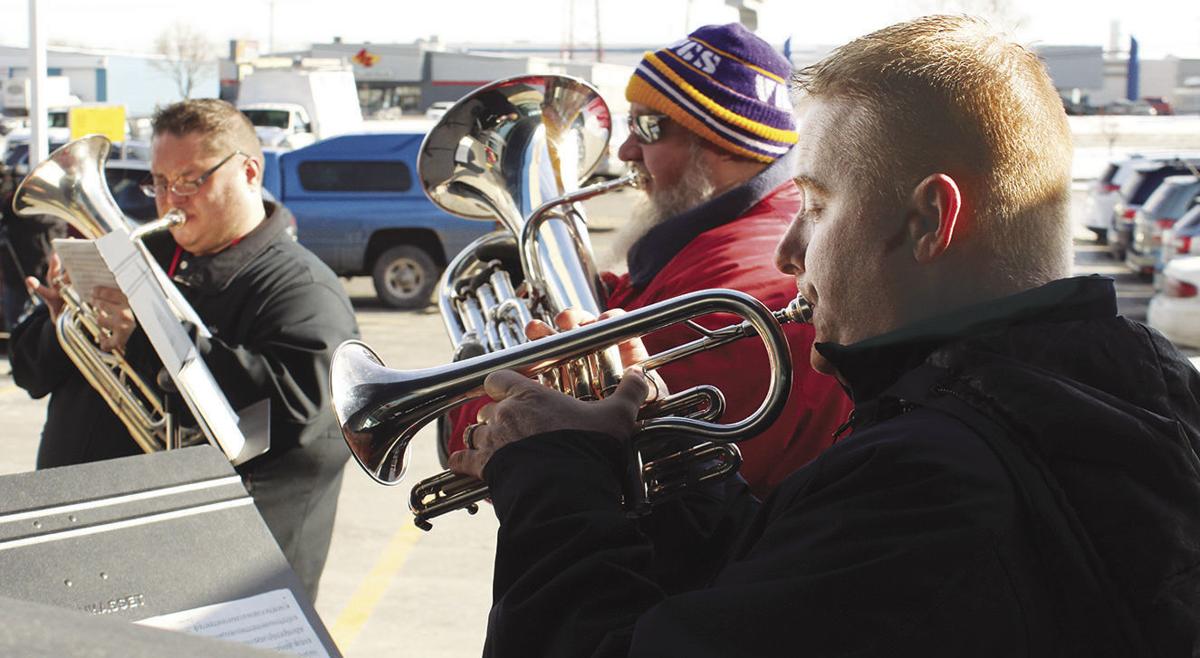 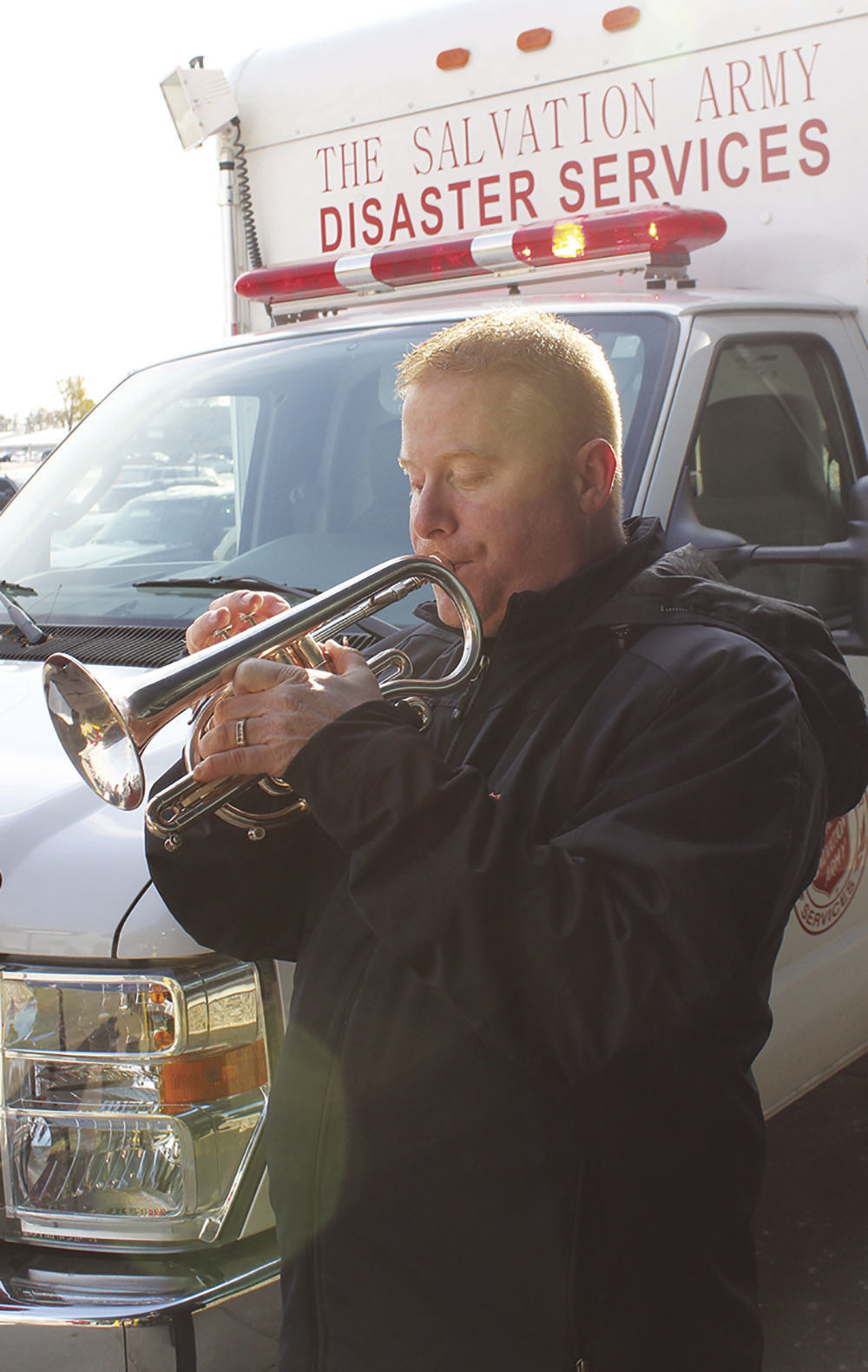 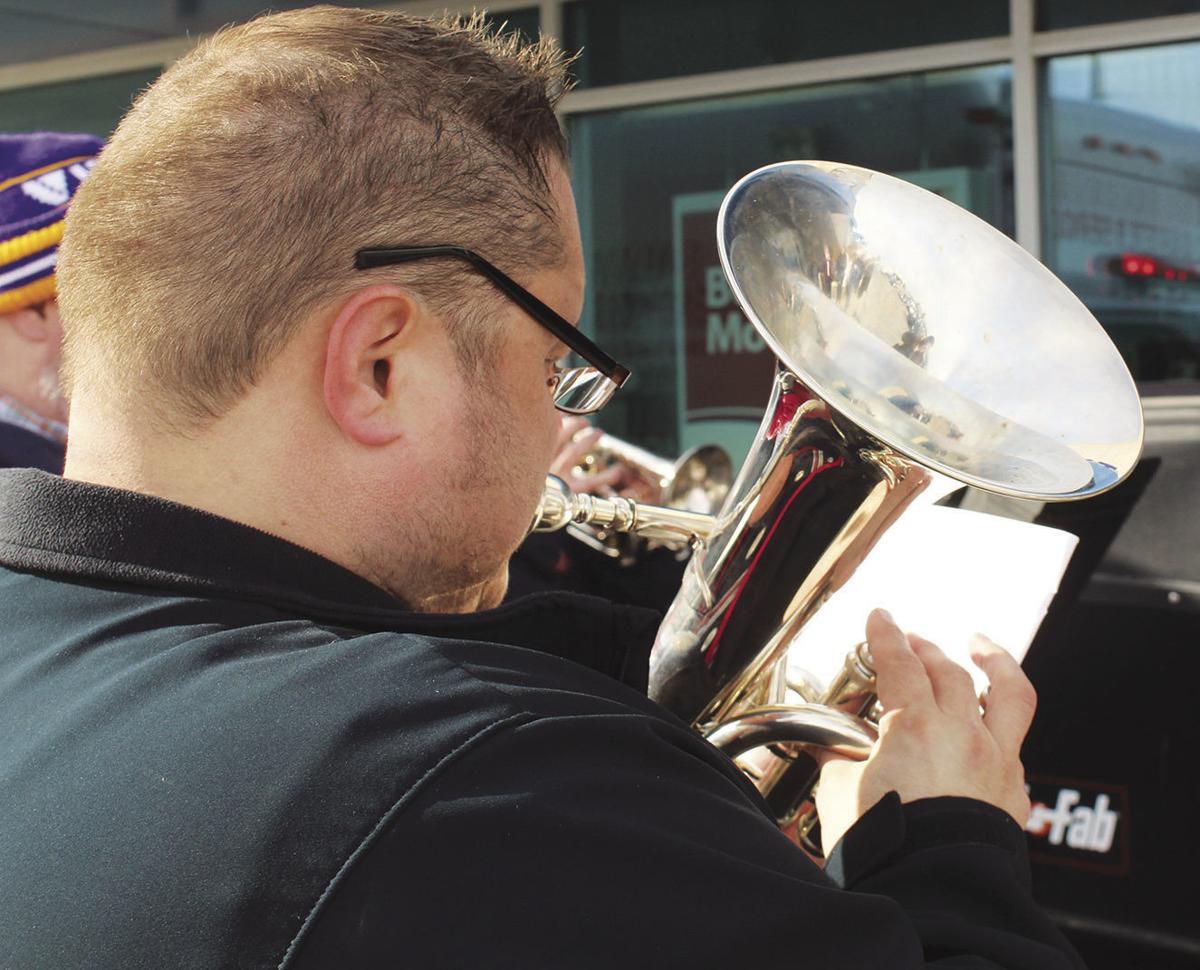 Christopher Kearney rang in the 2019 red kettle campaign for The Salvation Army Dane County on Friday, Nov. 8, at Blain’s Farm and Fleet on South Stoughton Road in Madison. The goal is to raise $600,000 before Dec. 24.

Steve Heck, director of operations and development for The Salvation Army Dane County, discusses the many ways to give during the annual red kettle campaign. In addition to cash and checks, people can give online, through mobile apps, with Google Pay and Apple Pay, with a QR code, by text and by credit card.

For Christopher Kearney, that’s mean a full-time job of volunteering to ring the bells and collect donations for The Salvation Army Dane County.

“Four years ago, I had a stroke, suffered some losses if you will,” said the eight-year U.S. Navy veteran. “The Salvation Army helped me greatly right after (to) stay on my feet. I’ve been giving back, helping as much as I possibly can ever since.”

Fittingly, Kearney pulled the first shift of the 2019 red kettle season, ringing the bell at Blain’s Farm and Fleet for eight hours Friday, Nov. 8, when The Salvation Army kicked off its winter campaign.

The Salvation Army, an evangelical part of the universal Christian church, has been supporting those in need since 1865. Nearly 33 million Americans receive assistance from The Salvation Army each year through an array of social services that range from providing food for the hungry, relief for disaster victims, assistance for the disabled, outreach to the elderly and ill, clothing and shelter to the homeless and opportunities for underprivileged children.

Steve Heck, of Sun Prairie, is the director of operations and development with The Salvation Army Dane County.

Every hour of ringing brings in about $60, which is enough to feed and shelter a mother and child in the family shelter for three nights.

“They do such great things,” Kearney said. “They help so many people.”

Bell ringers are needed at dozens of stores across several communities in the county. Right now, less than 20 percent of the time slots are filled.

Volunteering can be done as singles, couples, families, groups. At certain locations, bell ringers can bring their dog or play a musical instrument.

Heck said bell ringers are often thanked by those who donate and hear stories about how the Salvation Army helped them or their family.

“You never have a bad experience with it,” Heck said.

Shifts are either one or two hours, depending on the location and whether the ringers are inside or outside.

“A husband and wife used to ring together all the time down at the Walgreens on Monona Drive,” Heck said. “They noticed there weren’t a lot of shifts filled, so they split. One rang, and then the other would come so they could do more shifts to try to make sure we were covered and raise the money.”

Kearney gives much more of his time.

“This winter, I will work five eight-hour shifts a week now through the season,” he said. “(I enjoy) the smile and the joy I see in people when they donate, especially when they teach their children and explain to them what it’s for.”

Locally, 87 cents of every dollar raised is used to directly support programs and services in Dane County. The goal this year is to raise $600,000, Heck said.

“Without success in (the red kettle campaign), we’re going to struggle, and we can’t afford to struggle,” he said. “People are counting on us. Our biggest challenge really with the kettle campaign is getting more people to ring. If people are there ringing, people will give. Last year, we ended the campaign with about 32 percent of our shifts filled, and we did over a half a million dollars. Imagine if we had 60 percent.”

People can donate with cash or checks, as well as a few new options this year.

At the red kettle locations, donors can give through Apple Pay or Google Pay, give with a credit card, donate by using the QR code or text DANE to 24365 (24 hours a day, 365 days a year). People can also donate online at SalvationArmyDaneCounty.org.

The Salvation Army Dane County red kettle campaign runs now through Dec. 24. Shifts are from 8 a.m. to 8 p.m. every day except Sundays at 63 locations across Dane County. To sign up, visit ringbellsdane.org or call 250-2283.