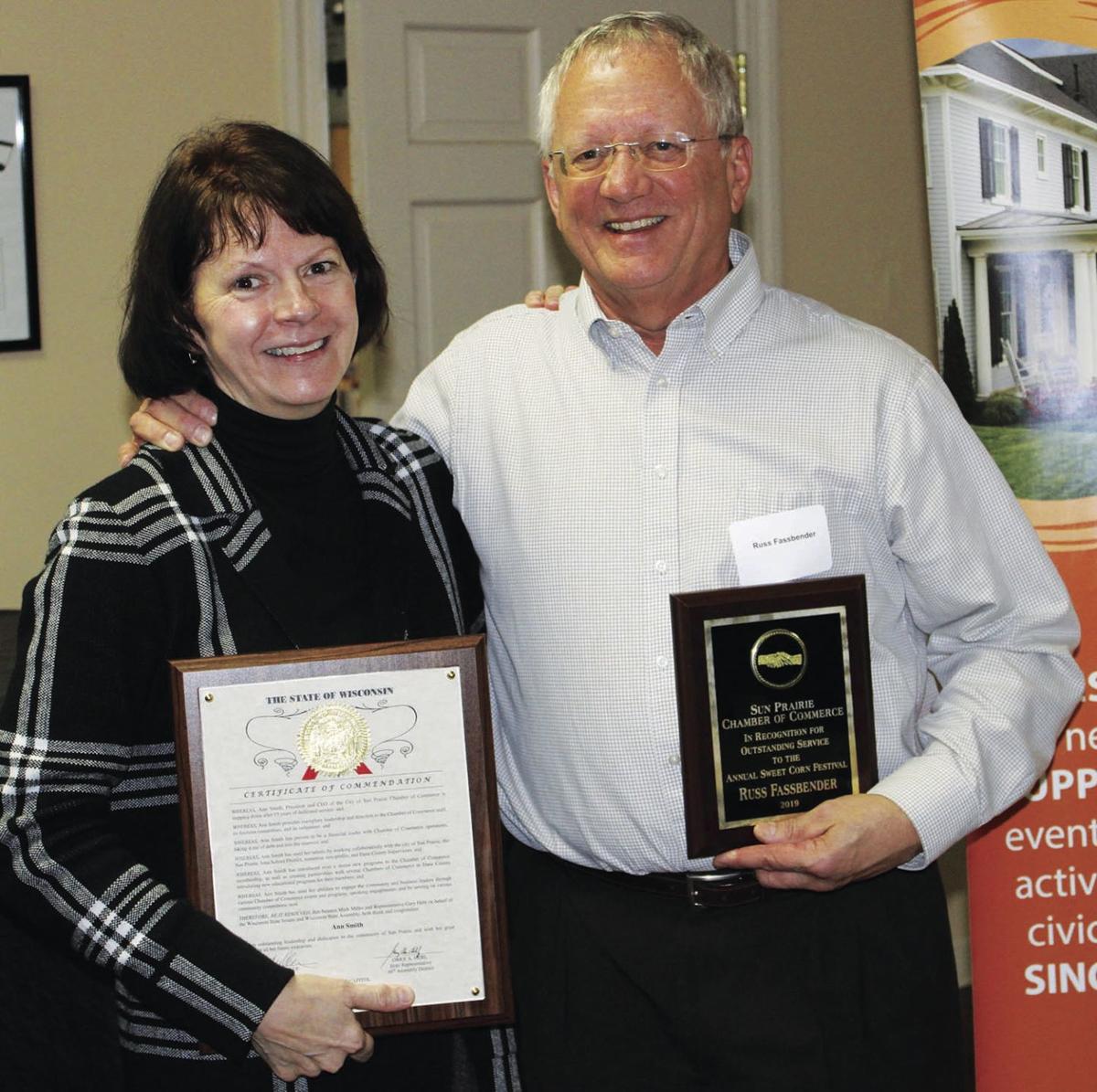 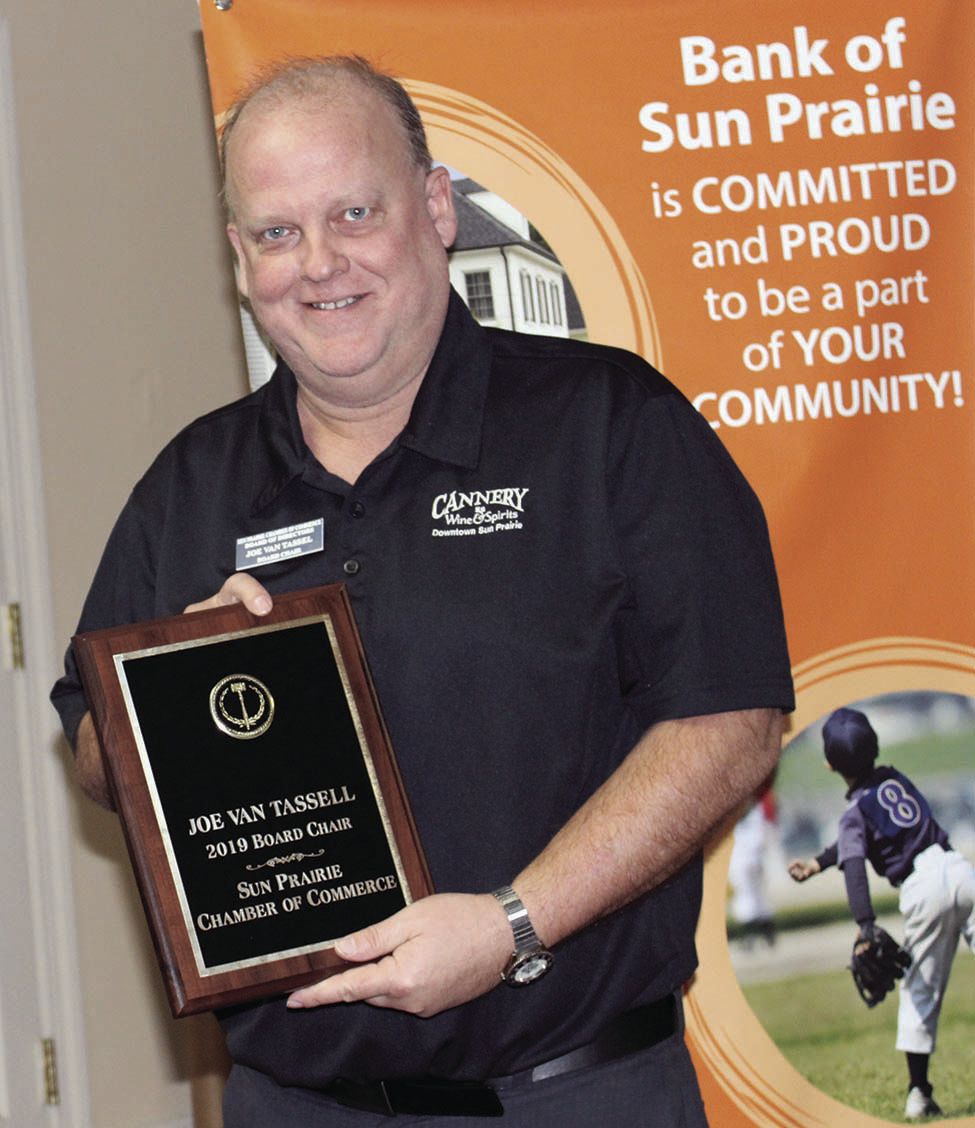 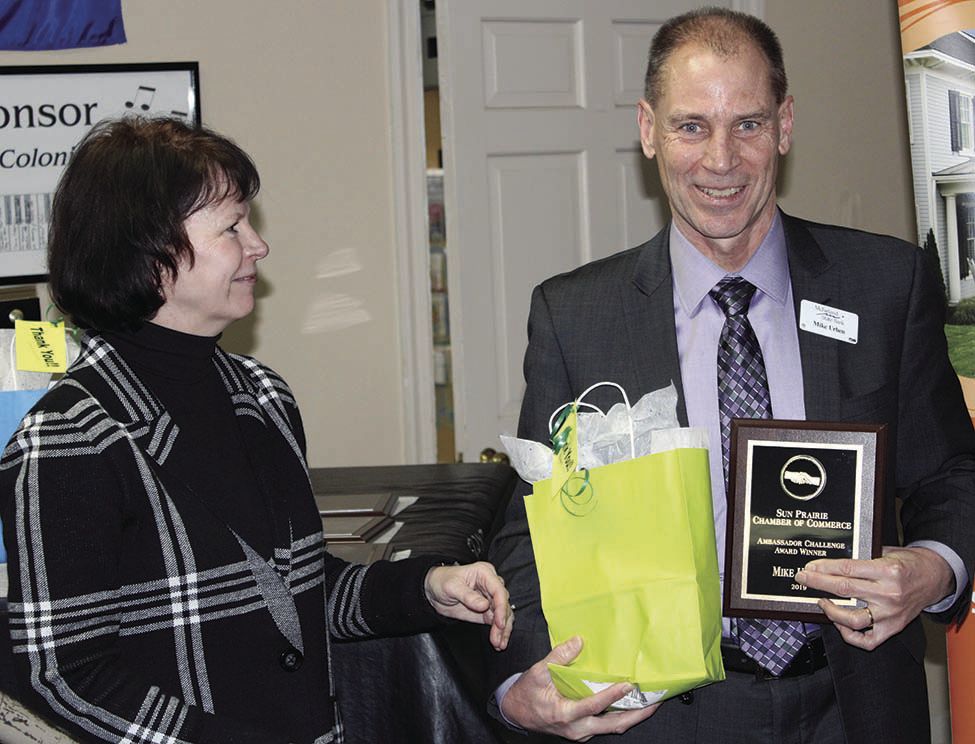 Mike Urben of MdFarland State Bank won the Ambassador’s Challenge Award from the Sun Prairie Chamber of Commerce. The award, presented by Sun Prairie Chamber President Ann Smith (left), recognizes the chamber ambassador with the most visits to chamber members during the previous year. 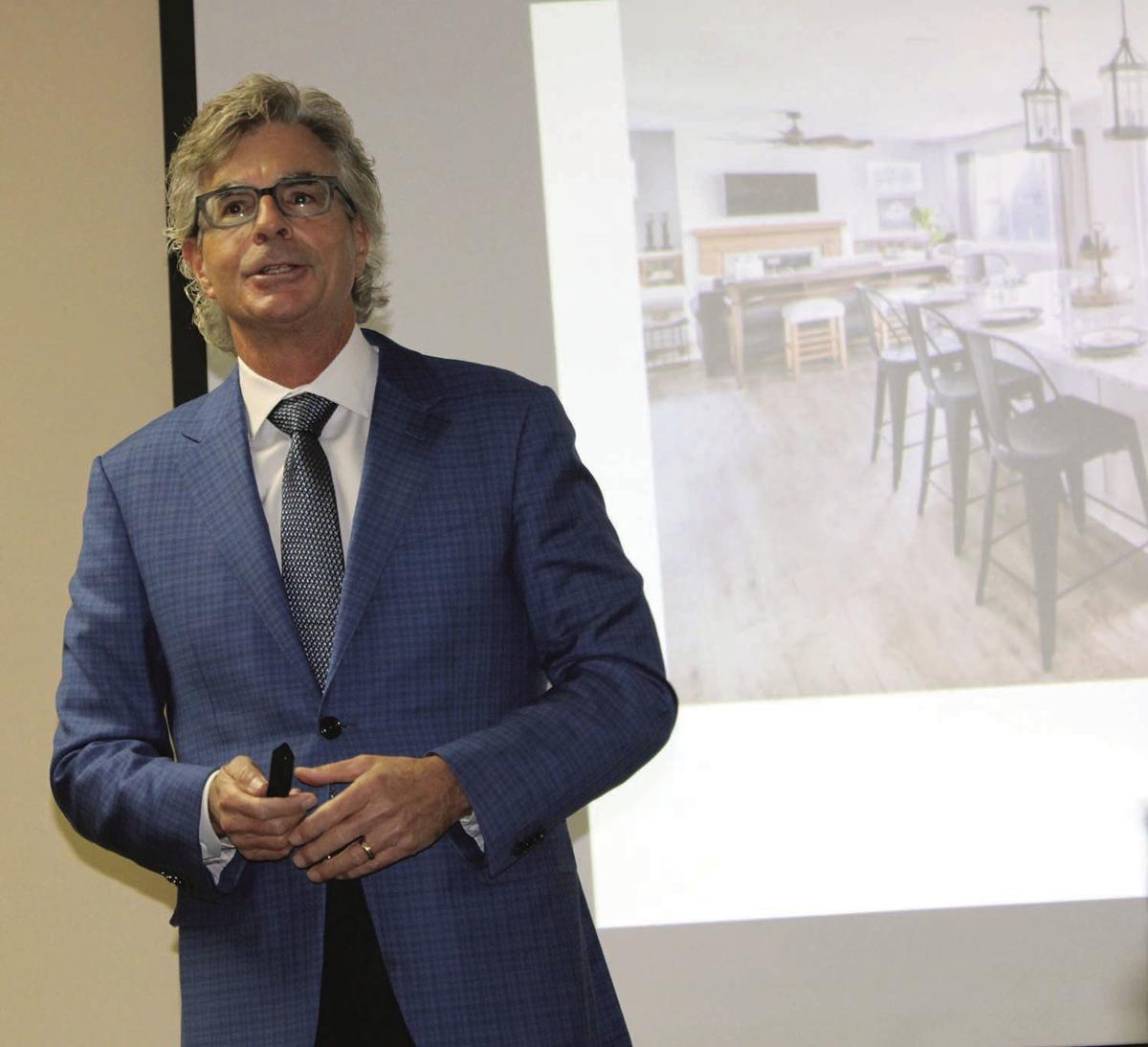 Sun Prairie native David Simon of Veridian Homes was the keynote speaker at the Sun Prairie Chamber of Commerce’s annual meeting on Thursday, Jan. 30 at the Colonial Club. Simon spoke about how he believed the housing industry is a major driver of the U.S. economy and the secret to Veridian’s success which he said begins with communication and above-market compensation.

Mike Urben of MdFarland State Bank won the Ambassador’s Challenge Award from the Sun Prairie Chamber of Commerce. The award, presented by Sun Prairie Chamber President Ann Smith (left), recognizes the chamber ambassador with the most visits to chamber members during the previous year.

Sun Prairie native David Simon of Veridian Homes was the keynote speaker at the Sun Prairie Chamber of Commerce’s annual meeting on Thursday, Jan. 30 at the Colonial Club. Simon spoke about how he believed the housing industry is a major driver of the U.S. economy and the secret to Veridian’s success which he said begins with communication and above-market compensation.

The jam-packed Cremer Auditorium at the Colonial Club applauded after Smith received a plaque honoring her 20 years as executive director, president and chief executive officer of the chamber, but also a proclamation from Assembly Rep. Gary Hebl honoring her service with the chamber.

Some chamber members received an email notification on Jan. 15 that Smith’s final days of service with the chamber would be Jan. 27 in the office and Jan. 30 at the annual meeting.

“I would like to announce that our President, Ann Smith has decided to pursue a new career opportunity and has accepted a position with another organization,” Sun Prairie Chamber President Joe Van Tassel wrote in the Jan. 15 email. “Ann has been with the Sun Prairie Chamber of Commerce for 20 years and has dedicated a tremendous amount of her time to this city and surrounding communities.

“Her passion for Sun Prairie and her loyalty to the chamber over this time cannot go unrecognized,” Van Tassel added. “On behalf of the Chamber Board of Directors, we sincerely appreciate all of Ann’s hard work and accomplishments. Sun Prairie has been on a fast-paced high-growth track over Ann’s command, and I would like to thank Ann for all she has done.”

Hebl, whose proclamation was from State District 16 Senator Mark Miller and himself, noted Smith’s presence during the community’s largest period of growth.

“As many of you now know, Ann has taken a new job and we’re going to miss her here at the chamber. Well I tell you, she’s been the director during the biggest growth spurt that Sun Prairie has ever experienced over the last 20 years and people who left 20 years ago and came back, do not recognize the city,” Hebl said. “And the chamber is such an important part of the growth of our city.”

Smith struggled to keep back tears during Hebl’s presentation and was choked up during the presentation.

Fassbender, who received his award for 30 years of volunteering to steam the sweet corn for the annual Sweet Corn Festival, thanked the room full of chamber members and guests, too, but mentioned a few individually.

“I want to say thank you to Nick Conrad. He was my good partner in everything. We always work together with John Muller, who couldn’t be here. He had himself a stroke a little bit ago, but he was always one of our big helpers. I have my boys who saved me so many times over,” Fassbender said. He recalled the history of the steaming operation from its days at the Stokely Canning Company just a few feet from Angell Park, to its current location in a building constructed specifically for steaming in Sheehan Park.

Fassbender also thanked his wife, Joe Kott, and revealed one more thing: “It’s been a lot of fun. Thank you.”

Other awards included recognition of outgoing and retained board of directors members, and Mike Urben from McFarland State Bank, who won the Ambassador’s Challenge Award for making the most Chamber Ambassador visits to new chamber member businesses during 2019.

Using a series of slides, Simon said during his talk at the annual meeting that the right kind of housing and the housing industry drive growth in the U.S. economy.

“There just isn’t enough product being built. And right now we’re in what, a growing economy? So when we’re approving housing, when the mayor and the teams approving housing options, we need housing to house what — our workers, right? I don’t think anybody goes into a business saying, ‘Hey, this year I want to propose that I drop my revenue.’ No, you’re growing revenue and when you’re growing revenue, you need what good people need to run your businesses,” Simon said. “And typically we’re finding is housing is lagging — the ability for the economic growth within the United States.”

The same thing applies to Dane County, according to Simon, who showed a slide of housing starts pre-recession in 2003 with roughly 2,500 single family housing starts in the market.

“The recession bottomed out, [housing starts] came back, but it’s never come back,” Simon added. “We’re still 50% below the housing starts that were in this county pre-recession. In fact, it went down a little bit.”

Simon outlined the secret sauce for success at Veridian begins with communication — several opportunities for employees to give input each year. “I look at it as this way: I say communicate early and often — it is a team sport. It isn’t just top down, it’s how do you listen to your employees.”

Veridian, which uses a personality profile in hiring new associates also conducted a salary survey and pays associates at or above what the market place bears. Company-wide meetings are aimed at improving employees through education and communication, and employees also receive profit-sharing.

Simon also said the housing business more than just building houses. “That’s what this business is all about — building relationships with your prospects, with your consumers. And the last couple of lines is how we hire — we’re focused on, we want to have innovators and individuals who have pride and are passionate about life and hopefully passionate about the job that we’re involved in.”