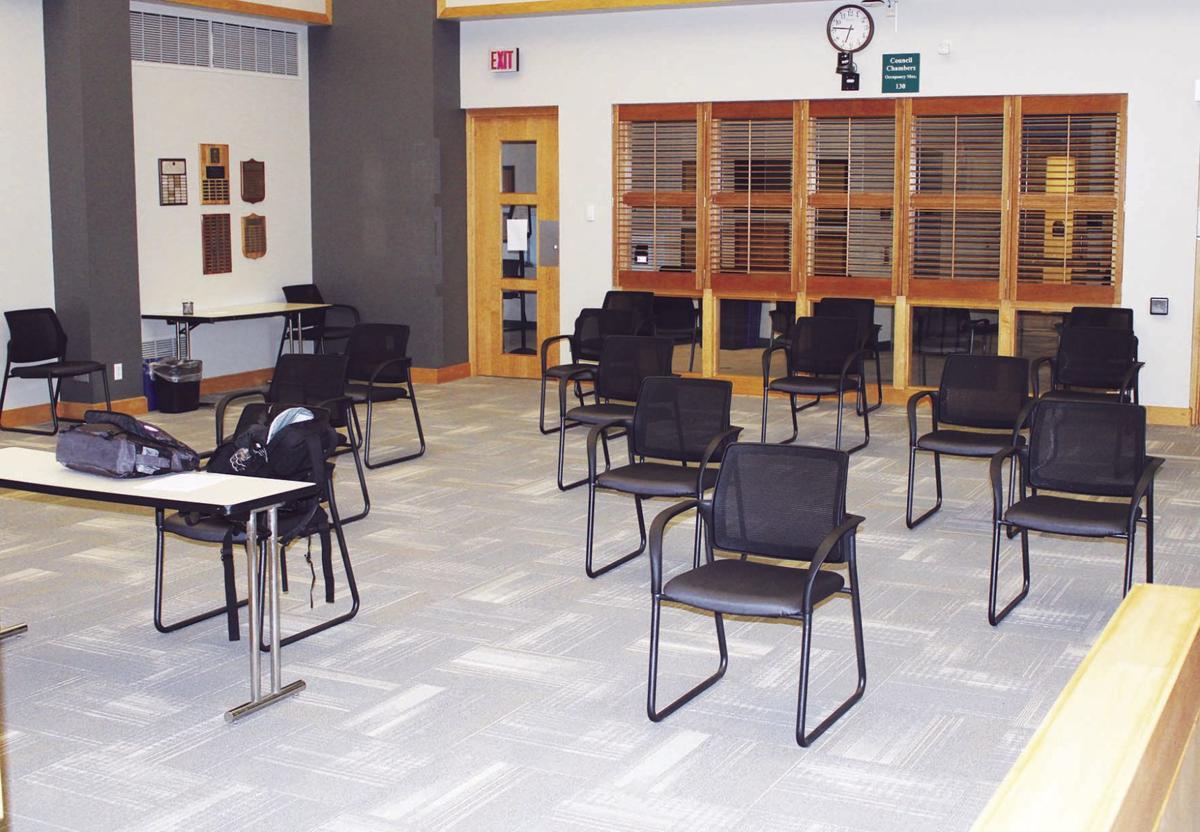 Set up in a checkerboard pattern, the chairs in the council chambers audience area were placed to adhere to “social distancing” guidelines issued by the Centers for Disease Control (CDC) which state people should be six feet apart. 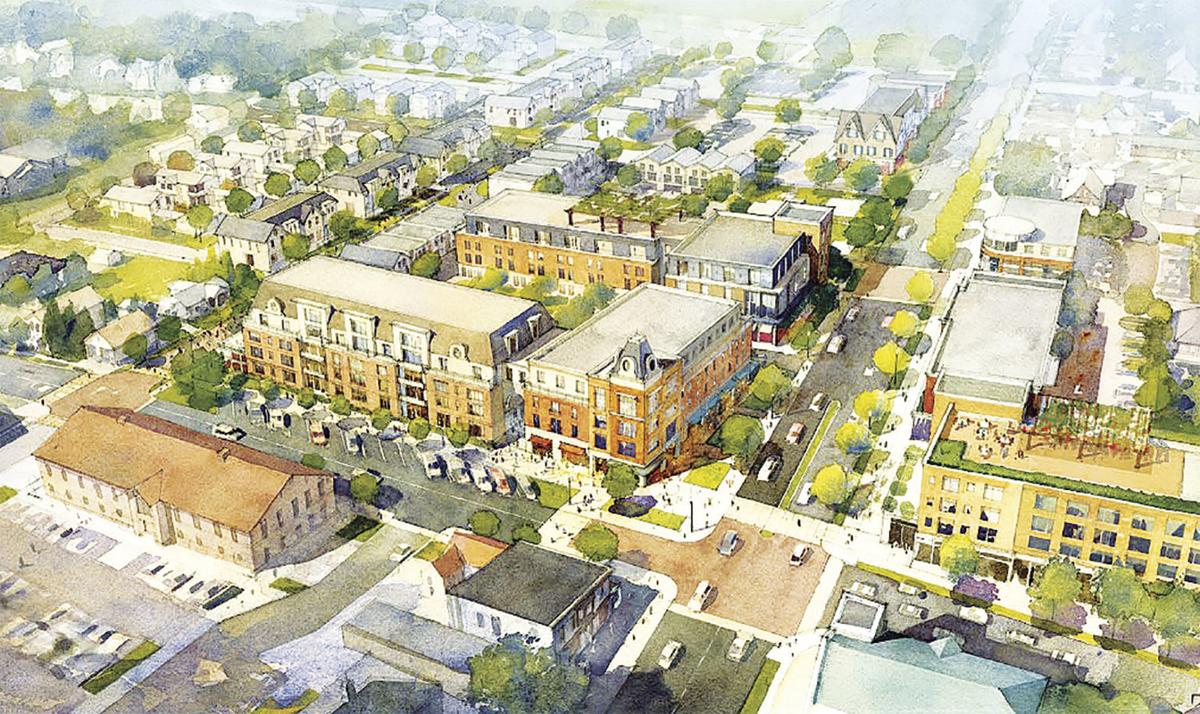 Alders voted Tuesday March 17 to establish the city’s 14th tax increment finance district (TID) for the Bristol-Main redevelopment. This concept sketch shows Bristol Street in the foreground with the proposed five-story building set back from the intersection (left) and a boutique hotel (right).

Set up in a checkerboard pattern, the chairs in the council chambers audience area were placed to adhere to “social distancing” guidelines issued by the Centers for Disease Control (CDC) which state people should be six feet apart.

Alders voted Tuesday March 17 to establish the city’s 14th tax increment finance district (TID) for the Bristol-Main redevelopment. This concept sketch shows Bristol Street in the foreground with the proposed five-story building set back from the intersection (left) and a boutique hotel (right).

During a meeting when two alders demonstrated “social distancing” by not being at the council dais, the Sun Prairie City Council on March 17 approved a new affordable housing fund and the city’s 14th tax increment finance (TIF) district.

According to a resolution from Community Development Director Scott Kugler, TIF District #14 would be created as a blight-elimination TID to facilitate additional redevelopment in the downtown. The existing downtown TID #8 was created in 2001 and does not have enough time remaining to cover any new redevelopment efforts at Main and Bristol, 402 E. Main, or other remaining potential redevelopment sites.

Kugler wrote in a memo that the new district TID 14 will contain portions of the current TID #8 as well as new areas included in the Sun Prairie Stronger Plan. It would also clean up known boundary issues in several areas where the current TID #8 boundary does not align well with parcel lines and property ownership. In drafting the proposed boundary, city staff specifically aimed to keep already redeveloped parcels with TID #8, and focus only on areas that might be subject to additional redevelopment or other potential TID investment.

By keeping prior redevelopment areas in TID #8, the existing district would retain enough increment to close on schedule and cover any remaining project costs, because TID #8 is currently projected to close in 2025, Kugler added.

City Administrator Aaron Oppenheimer said staff needed an enabling motion to begin the process, and that alders will see the item several times before final approval.

The city housing fund, approved as part of the city’s recently adopted Comprehensive Plan 2019-39 document, will take the final year of proceeds from TID 6, which will retire this year.

TID 6, located along Marshview Drive, is an industrial TID that is scheduled to close at the end of this year, according to Kugler.

Until recently, projections indicated that it would likely be closing with a deficit. However, with the closing of financial records for 2019 the Finance Department discovered that TID 6 will end up closing with a positive balance, according to Kugler’s memo.

“This means that the potential exists to keep the district open longer to provide funding of approximately $165,000 that can be used to support affordable housing,” Kugler wrote. “The appreciation of property values and increment added in recent years contributed to the change in outlook for this TID.”

District 2 Alder Theresa Stevens said she did not want to approve the use of the final year of TID 6 proceeds without a framework in place.

Oppenheimer said the resolution enables the establishment of a fund, and the council will establish the procedures allowing use of the money from the fund.

District 1 Alder Steve Stocker said he was opposed to the use of city funds. He said he’s already heard from some of his constituents about this, and that some of them are on fixed incomes and having trouble paying for their property taxes. He opposed the use of the TID 6 proceeds for a housing fund.

But District 4 Alder Mary Polenske questioned the use of the money.

When she asked Oppenheimer about where the money would go if it does not go to a housing fund, Oppenheimer and Kugler replied that the proceeds would be returned to all of the taxing jurisdictions that allowed the establishment of TID 6. Those taxing jurisdictions include Dane County, the Sun Prairie Area School District and the Madison Area Technical College Board in addition to the city.

Polenske said she doubted that District 4 residents would support the use of the TID 6 proceeds for an affordable housing fund.

The city’s portion, far less than the $165,000, would be used for general fund expenditures, according to Oppenheimer.

Alders Emily Lindsey (District 1) and Al Guyant (District 4) were not in the council chambers from the meeting, instead choosing to following the Centers for Disease Control (CDC) Guidelines about social distancing by appearing at the meeting by phone (which is allowed by the state’s Open Meetings Law). Audience chairs were also conspicuously placed six feet apart in a scattered pattern to encourage social distancing among spectators in the council chambers.

District 3 Alder Mike Jacobs — admitting he was “channeling his inner Bill Connors” — reminded alders the money has not been designated or even spent yet, and favored establishment of the fund. He also said the city uses TIF dollars to bring businesses to the city, and that this was no different.

The council voted 6-1, with Stocker voting no, because Connors’ District 2 council seat is unfilled.