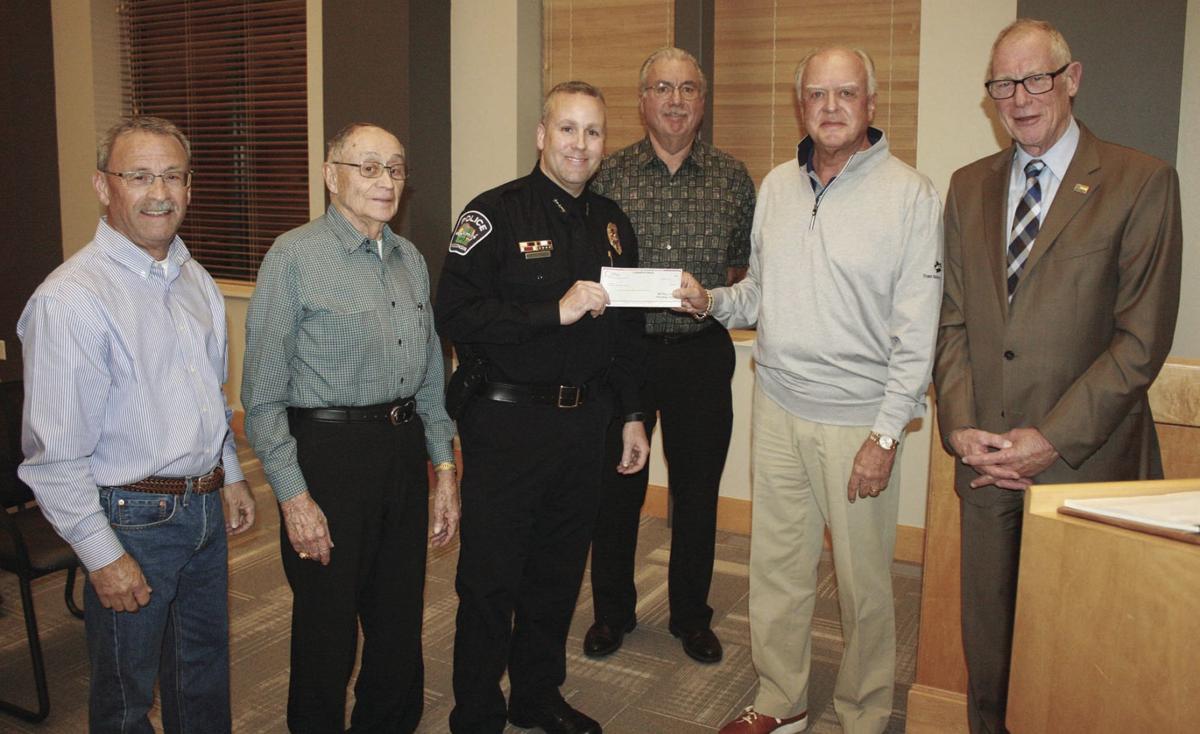 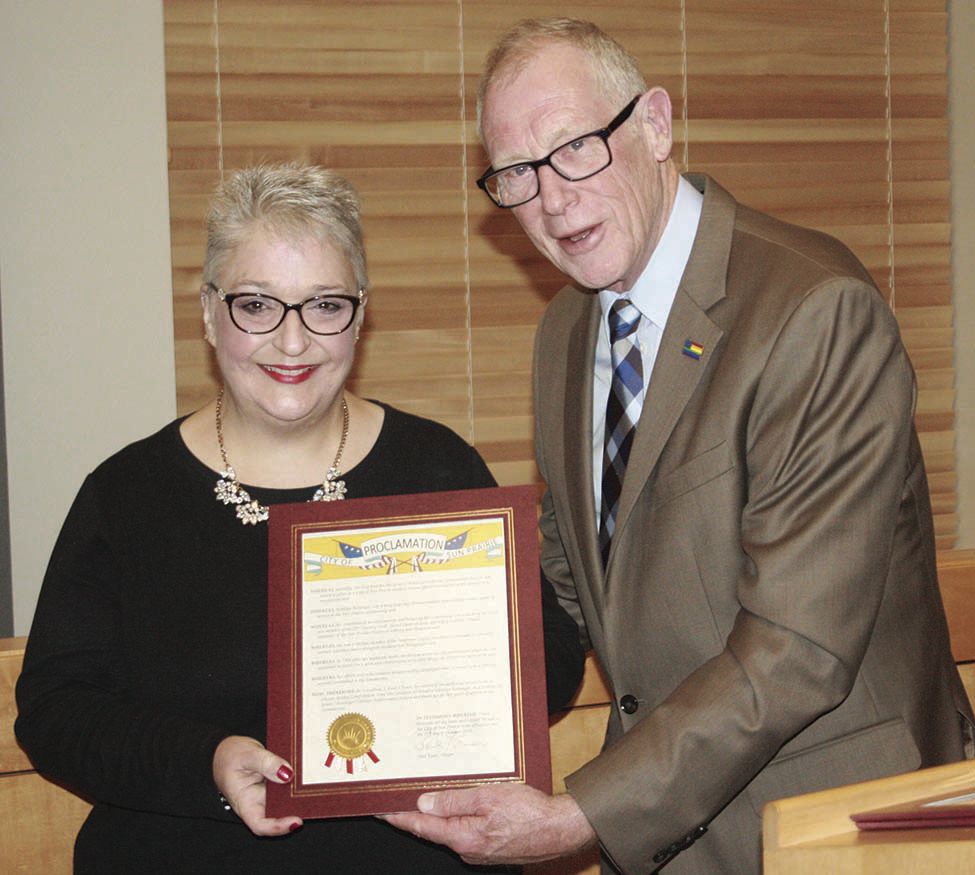 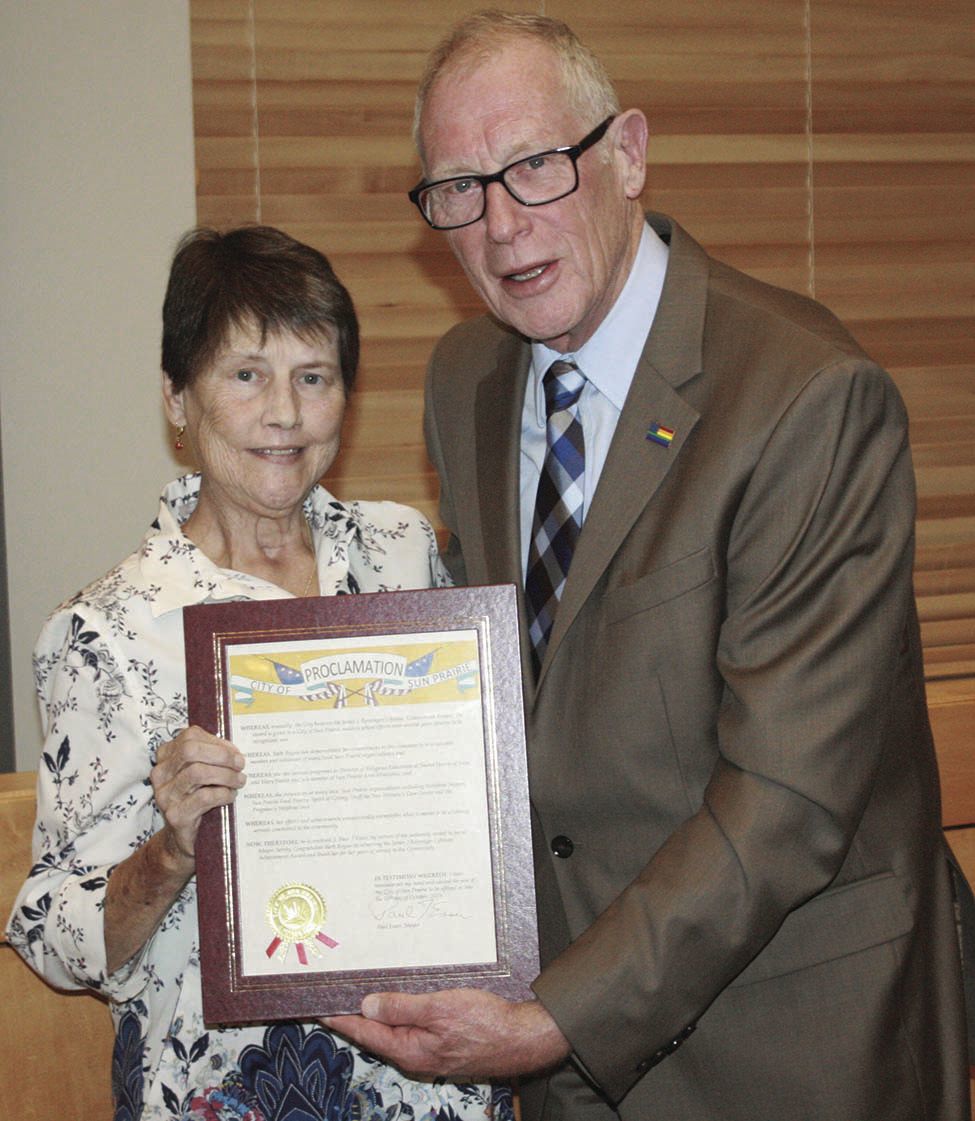 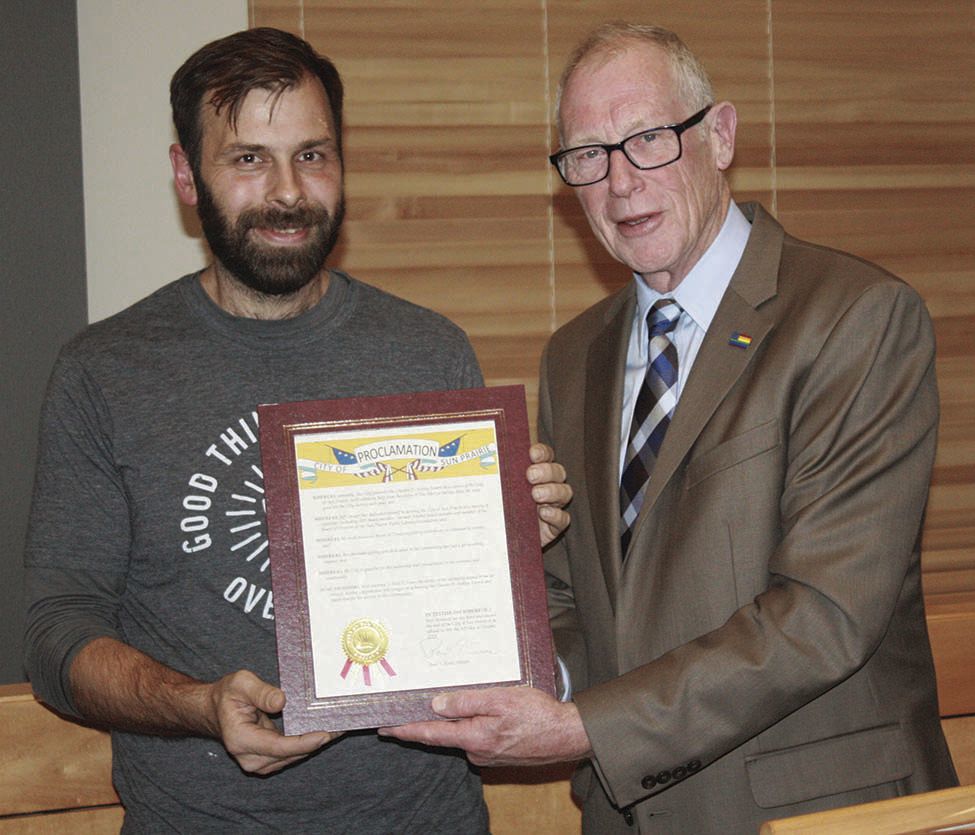 Jeff Gauger accepted the Charles D. Ashley Award — presented to a recipient judged to have done the most good in the city during the past year — from Mayor Paul Esser during the Tuesday, Oct. 15, 2019 Sun Prairie City Council meeting. 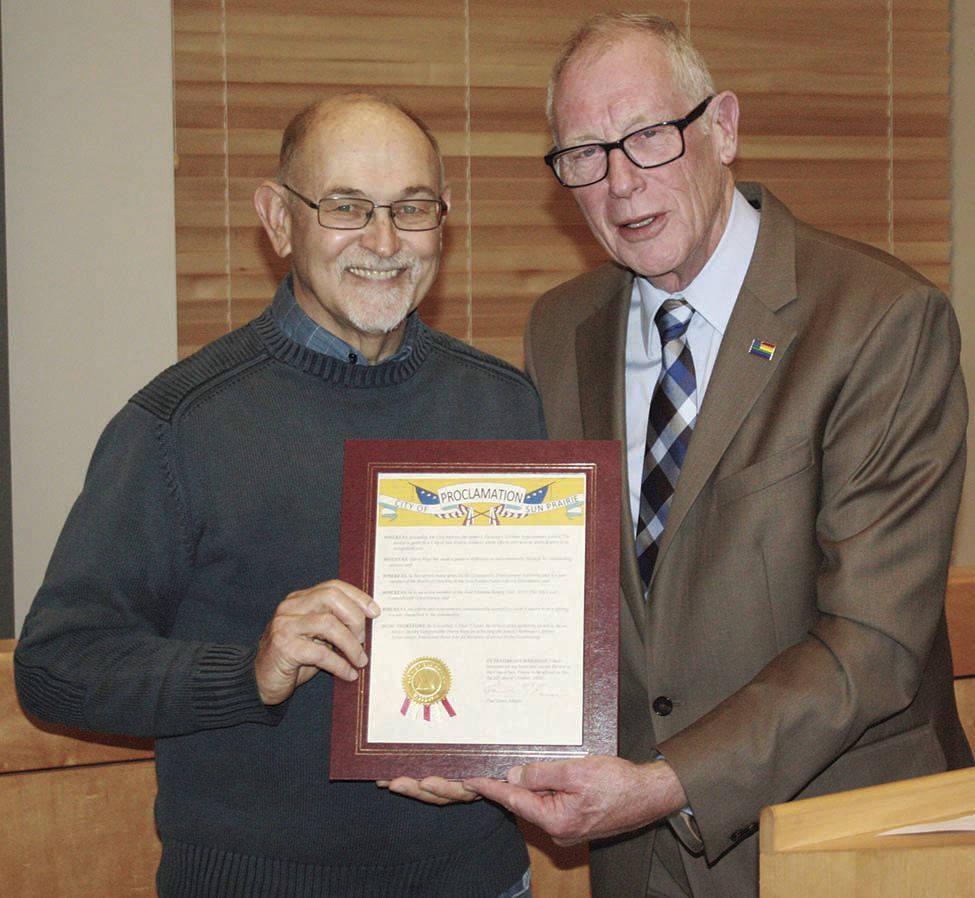 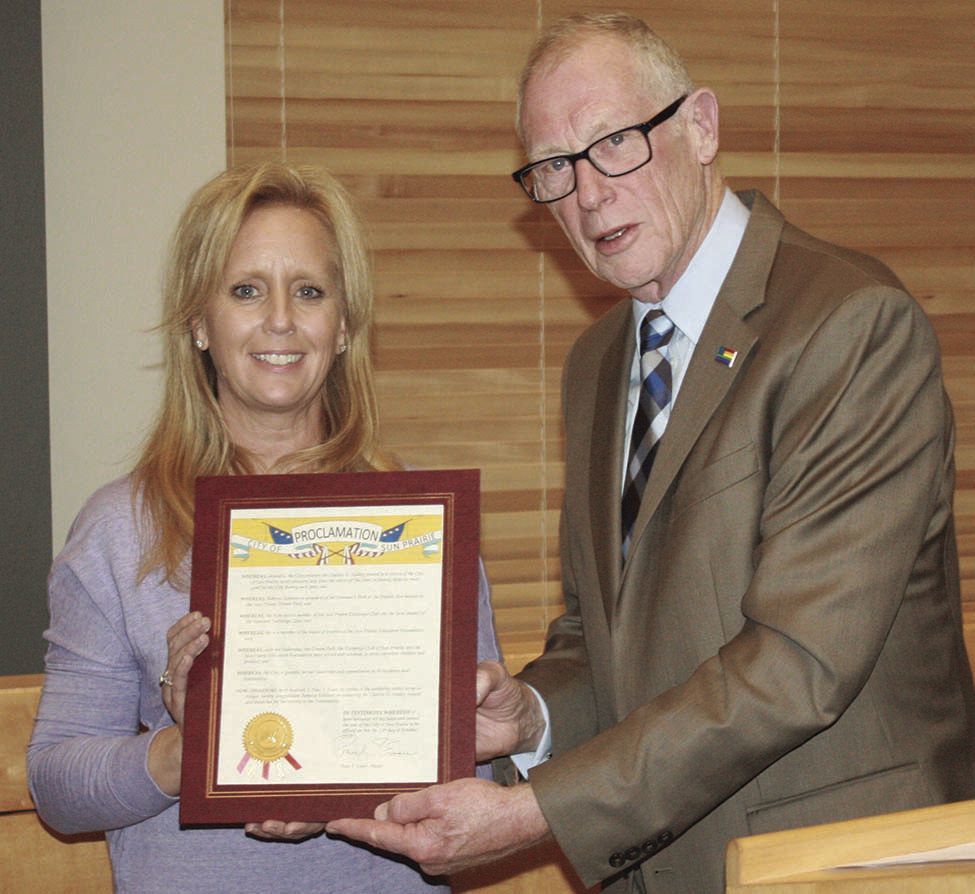 Jeff Gauger accepted the Charles D. Ashley Award — presented to a recipient judged to have done the most good in the city during the past year — from Mayor Paul Esser during the Tuesday, Oct. 15, 2019 Sun Prairie City Council meeting.

During the Oct. 15 meeting, the Sun Prairie City Council learned what it was like to give and to receive.

That’s because the Sun Prairie Improvement Council presented Acting Sun Prairie Police Chief Brian Teasdale with a check for $207,000 to cover the cost of a second K-9 unit — including vehicle and equipment — as well as the replacement K-9 for current Sun Prairie Police K-9 Lasko.

But the council also approved the presentation of the Charles D. Ashley Award and the James J. Reininger Lifetime Achievement Award.

Given to the individuals who do the most good for the city during the past year, the Ashley Award was presented to Jeff Gauger of Beans ’n Cream Coffeehouse, and Rebecca Ketelsen, who is active with several organizations.

Gauger has dedicated himself to serving the City of Sun Prairie in a variety of capacities including BID board member, Farmers Market board member and being a member of the Board of Directors of the Sun Prairie Public Library Foundation.

Beans ‘n Cream regularly contributes to community events — including being involved with the annual Sun Prairie Library Foundation Spring Gala in preparing food and coffee. Gauger’s charitable giving and dedication to the community through local schools and at other charitable functions like A Night of Heroes has had a far-reaching impact.

Ketelsen spear-headed the effort to remember Lee Buske, a longtime Exchange Club member, for his gift to the club and several community causes. The club remembered Buske, with members of his family present, during the Taste of Sun Prairie at Angell Park in late July.

For the first time, a member of the Reininger family received the award named for its patriarch, former alder James J. Reininger. Marilyn Reininger, who was Jim’s wife, received the award posthumously. Accepting for her mother, Amy Reininger McCutcheon recalled that her mother was a long time Sun Prairie resident who dedicated many years of service to the Sun Prairie community — many times, right next to her husband, Jim.

A member of the 20th Century Club, Reininger was also a member of Sacred Hearts of Jesus and Mary Catholic Church, a volunteer for the Sun Prairie Historical Library and Museum, a lifetime member of the American Legion Auxiliary, and co-leader in 4H.

In 1995, after her husband Jim’s death, Marilyn Reininger became active in city government when she was appointed to finish Jim’s District 1 aldermanic term and continued to serve after being elected for one more term on the Sun Prairie City Council.

Barb Rogan received the Reininger Award for her volunteer work through many organizations, including operation of various programs as Director of Religious Education at Sacred Hearts of Jesus and Mary Parish, being a member of Sun Prairie Area Ministries, volunteering at Sun Prairie organizations including Sunshine Supper, the Sun Prairie Emergency Food Pantry, the Spirit of Giving, Stuff the Bus, the Women’s Care Center and the Pregnancy Helpline.

Harry Ripp received the award because of his community service that includes many years on the Community Development Authority board; a past member of the Board of Directors at the Sun Prairie Public Library Foundation, being a member of the Colonial Club Board of Directors, as well as being an active member of the East Monona Rotary Club, VFW Post 9362 and Groundswell Conservancy (watch videos of the award winners as well as the Improvement Council presentations with this story in the Videos section on sunprairiestar.com).

A portion of Angell Street — the portion between Bristol and Columbus streets — has been renamed for the late Cory Barr. Alders expressed a desire to recognize the natural gas explosion event of July 10, 2018 and the loss of Sun Prairie Fire Dept. Capt. Cory Barr. Angell Street between Bristol Street and Columbus Street is the site of Sun Prairie Fire Station #1, where Barr was stationed and where a memorial statue will be placed.

District 1 Alder Steve Stocker said following the unanimous vote that the change will not impact any street address or require any residential address change. The portion of Angell Street between Columbus and Church streets will remain Angell Street, which was named for Col. William Angell.

Despite objections from neighboring residents and questions from Stocker, alders voted unanimously to approve a General Development Plan (GDP) to develop lands located at the northwest corner of Town Hall Drive and East Main Street (STH 19) to include 118 single-family lots and associated open space.

Resident Jeanie Gilbertson, a frequent attendee of Sun Prairie city government meetings, said she supported Habitat for Humanity and the organization’s presence in Wisconsin. But in this particular case, Gilbertson said she believed the city should have required Habitat to develop on the city’s west side.

“In meetings that I’ve attended, too . . . as far as the people who speak, there seems to be a lot of opposition to it at this time,” Hoefer told the council. He also said that people in general seem frustrated with their representative local government because when they oppose something, it is approved.

After asking other questions relating more to the neighboring Gardens at Willowbrook neighborhood, Stocker asked about a Traffic Impact Analysis (TIA). “The answer I heard was it’s not needed . . . but what’s the plan B?” Stocker asked.

Any time a new development comes in, Community Development Director Scott Kugler said, city staff looks at the traffic issue to determine what the impact will be, especially on the intersections.

“Generally, if you look at this neighborhood,” Kugler said, “traffic is going to be dispersed pretty well.”

In total, there will be about an hour where traffic will be heavy — about 90 vehicles, or 1.5 cars per minute. A TIA to determine the impact on those five streets is not needed.

“The one thing that is warranted is perhaps a further study of the corner of Town Hall and 19,” Kugler said, adding that the intersection is not located within the connecting highway segment. “That is a study that really needs to be done by the [Wisconsin Department of Transportation].”