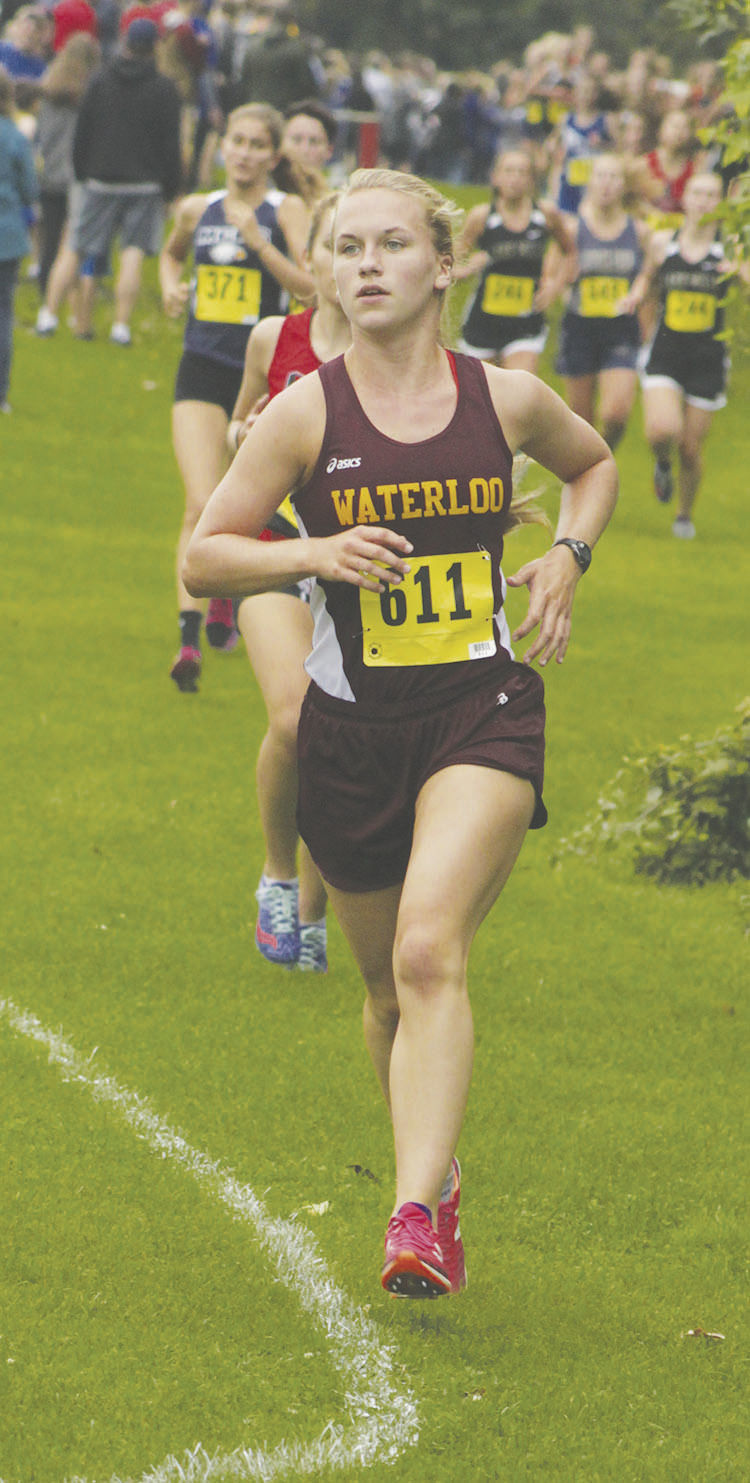 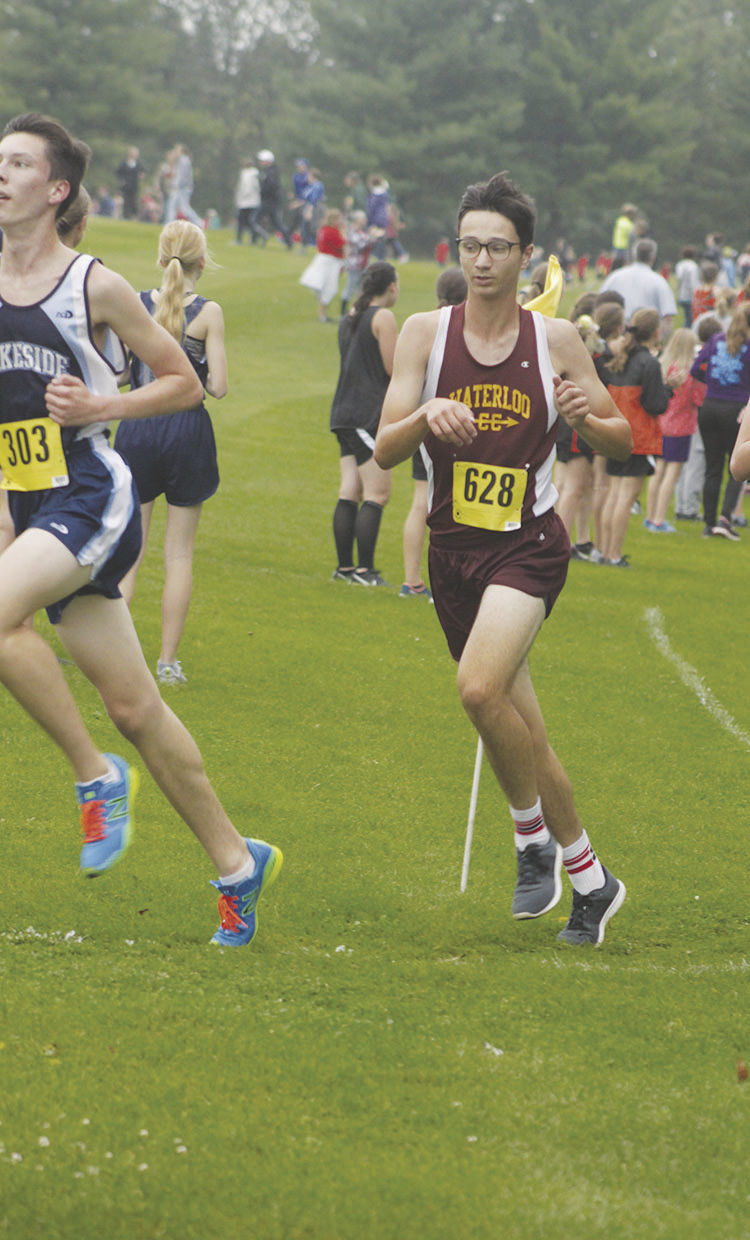 Waterloo’s Brody Tschanz makes the turn on his way to a 16th-place finish at the Poynette Invitational on Sept.12. 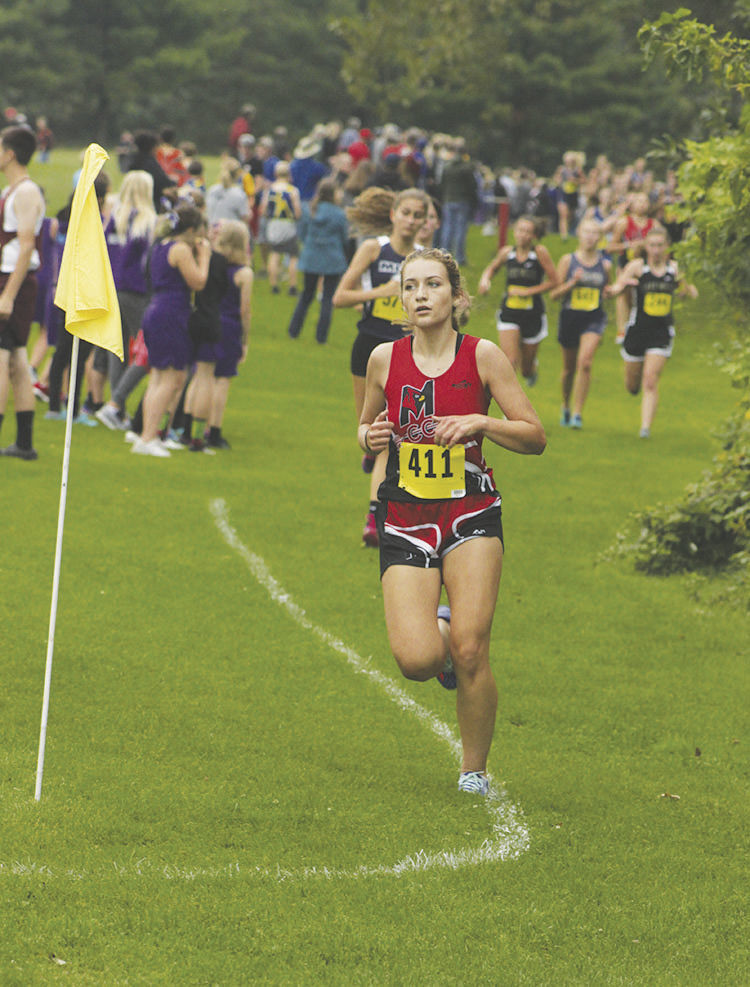 Marshall’s Gianna Dugan finished third in 21:02.7 at the Poynette Invitational on Sept. 12.

Waterloo’s Brody Tschanz makes the turn on his way to a 16th-place finish at the Poynette Invitational on Sept.12.

Marshall’s Gianna Dugan finished third in 21:02.7 at the Poynette Invitational on Sept. 12.

POYNETTE — Marshall had another pair of strong performances on Sept. 12 at the Poynette Invitational, with both its girls and boys teams finishing second in the Small Schools Division.

Gianna Dugan turned in the highest-placing performance of the day for Marshall, taking third place with a time of 21 minutes, 2.7 seconds. Dugan was followed by Mya Andrews in 22:06.9; Andrews crossed the line in fifth place.

Marshall’s boys were all grouped closely together, with only 51 seconds separating their first from fifth runners. Ethan Jennings and Justin Grady placed highest for the boys, crossing the line in fifth (19:37.5) and sixth (19:44.2) place, respectively.

“The boys ran a tight pack which should keep us competitive throughout the season,” said Marshall head coach Jeff Looze. “The kids are running well and coming together as teams.”

Marshall’s boys racked up a total of 45 points, which was also 20 behind first-place Poynette as a team.

After Friday’s Invitational at Rio was postponed to Sept. 20, Marshall’s next competition took place at McCarthy Park on Tuesday, the results of which were not available for this week’s edition.

The Cardinal runners will be back in action on Friday in Rio; start time is scheduled for 4:30 p.m.

Both the Waterloo boys and girls cross country team placed fourth in the Small Schools Division at the Poynette Invitational held on Thursday, Sept. 12.

The girls posted a team total of 127 points.

Senior Christi Forman led the way covering the 5K course in 20 minutes, 48 seconds, finishing behind only champion Poynette’s Katelyn Chadwick who posted a winning time of 20:23.

“We were actually confused, we though she finished first,” said Haberkorn of Forman. “But she actually finished second.”

“I’m really happy with how we did even though we were down a couple of runners,” said Haberkorn.

The Waterloo boys posted a fourth-place score of 92.

Juniors Jonathan Aguero led the Pirate pack with an eighth-place time of 19:54 and Brody Tschanz was 16th in 20:51.

“We were a little disappointed with their times, I thought we could have placed a little better,” Haberkorn said.

The Pirates will be without one of its top runners, Brenen Skalitzky, who will be sidelined with an injury for an undetermind amount of time.

Waterloo will compete in the Belleville Invitational Saturday. Running begins at 9 a.m.