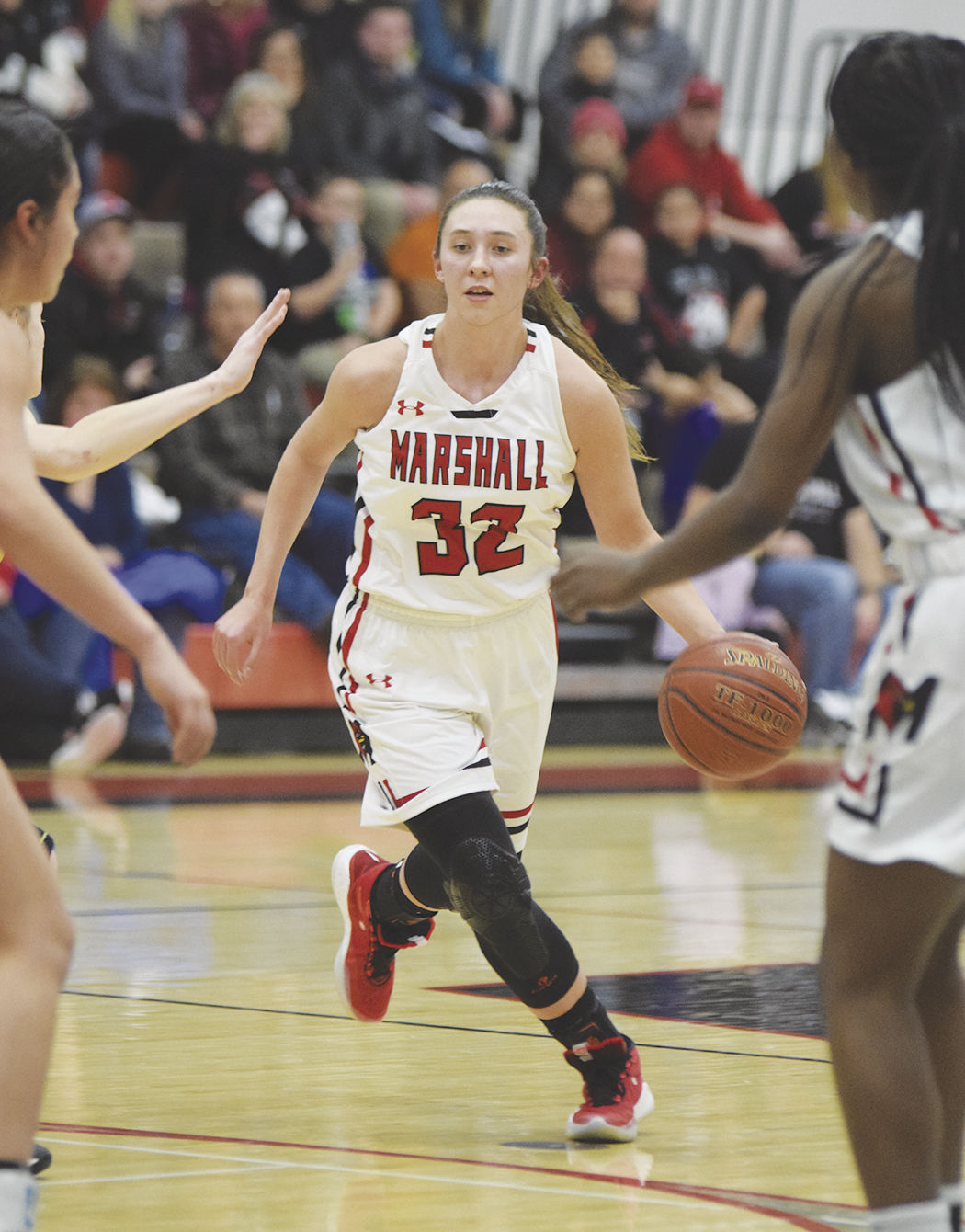 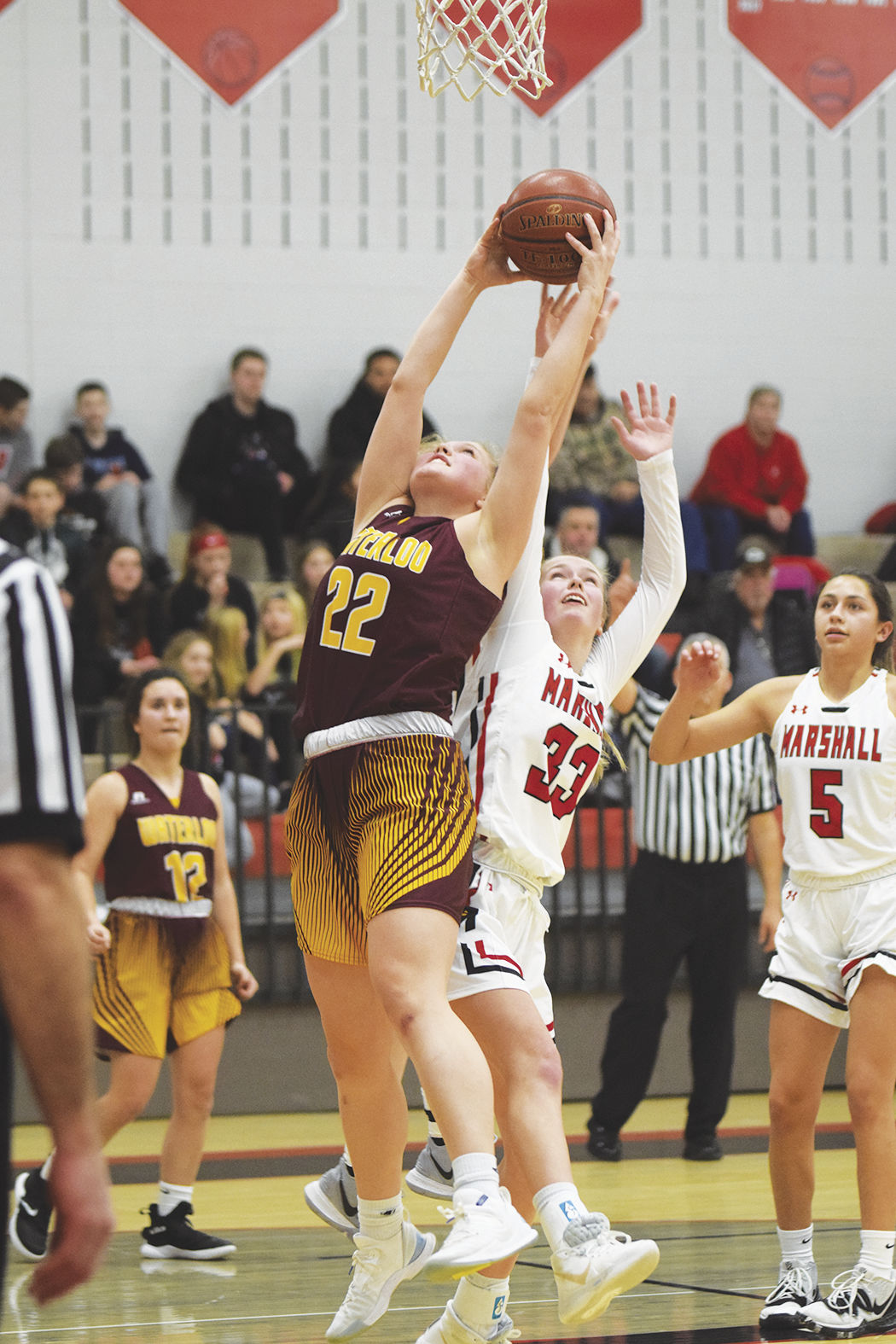 MARSHALL — Marshall had lost two of its previous four games heading into a Jan. 14 meeting with archrival Waterloo, and to say the Cardinals took out their frustrations on the Pirates would be a grave understatement.

“It demoralizes them,” said first-year Marshall head coach Doug Pickarts. “I thought our defense played a lot better in the first half, we limited their open looks, and then we got after them pretty well offensively. We ran a bunch of sets and kids were hitting the shots and we kind of set the tone early.”

Defending the outside shooting of Abby Ward and inside play of Anna Lutz and Laura Nickel was simply too much to ask of the young Pirates. Ward and Lutz each scored eight points as the Cardinals (8-4 overall, 2-0 Cap. South) exploded out to a 16-2 advantage.

“We were starting a young group playing in their first Waterloo-Marshall game; we were a deer in headlights,” said Waterloo head coach Gabe Haberkorn. “Chalk it up to inexperience and maybe the next time we play them it’s a different experience.”

Ward, a sophomore guard, buried three 3-pointers in the game’s first six minutes and finished with 11 of her 13 points in the first 18 half. Her outside shooting helped open up the middle where Lutz (6-1) and Nickel (6-0) used their size to dominate in the paint.

“Abby’s done that for us from time-to-time, she can do that, and that really opens up the inside and then Laura and Anna really got after it. Mya (Andrews) did a really good job of running the offense too, she also got a few offensive rebounds and a score. I thought overall our kids played pretty well tonight,” said Pickarts.

Trailing 9-0 early junior Skyler Powers got Waterloo (7-4, 0-2) on the board with a pair of free throws at the 15-minute mark. Meanwhile, the Cardinals held the Pirates without a field goal until junior Brooke Mosher connected at the 13:08 mark.

“We were changing our looks defensively to try and confuse them and make them make some bad decisions, so I thought we did a pretty good job of that; we went all man (to man) and tried to work on something we need to get better at,” said Pickarts.

Lutz, just a junior, scored 22 of her game-high 29 points in the first half and in the process moved past her older sister, Elizabeth (1,141 points) and Kiana Canon (1,155) into third place on the program’s all-time scoring list. Lutz’s total is now 1,169 as she trails only Pam Walters and the program’s all-time leader Kelsey Bakken (1,273).

“In my opinion UW-Milwaukee is getting a steal,” said Haberkorn of Lutz, who verbally committed to the Panthers in December. “She’s the real deal. You can’t defend (her), she’s just that good.”

Nickel, also a junior, finished with 22 points and scored her 800th career point in the process. She now has 815 points in only 68 career games played.

Waterloo trailed by as much as 36 points and was down 47-13 at the half to the Cardinals, ranked eighth in the latest Associated Press D3 poll.

“We turn the page,” Haberkorn said. “We’re 7-4, it’s one game and it’s Marshall: they’re the D3 champs and ranked. We’ll keep plugging away.”