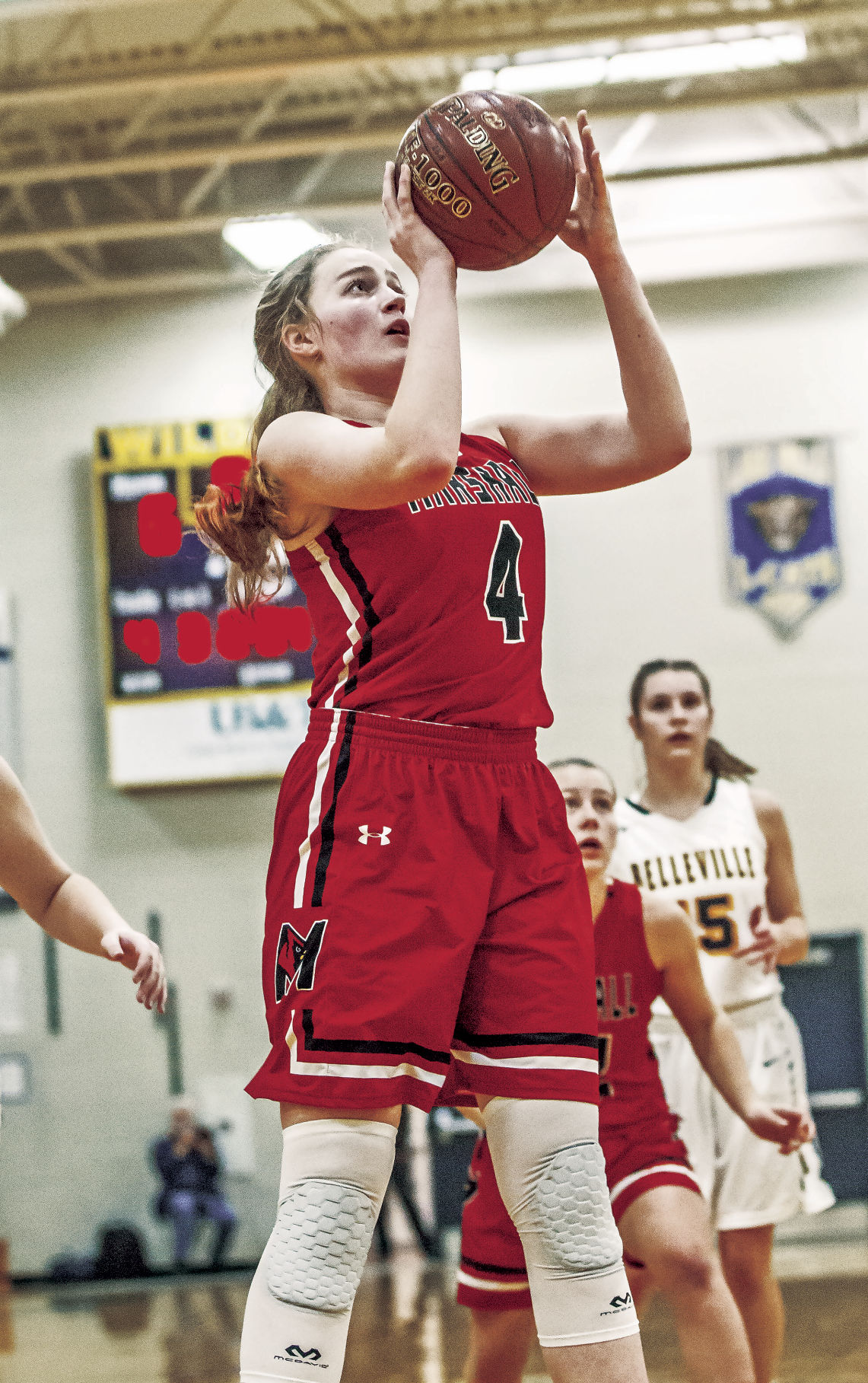 With this basket late in the first half, Anna Lutz set the new scoring record for the Marshall girls' basketball program. Lutz scored 28 points on the night to lead the Cardinals to a 70-33 victory over the Wildcats of Belleville. 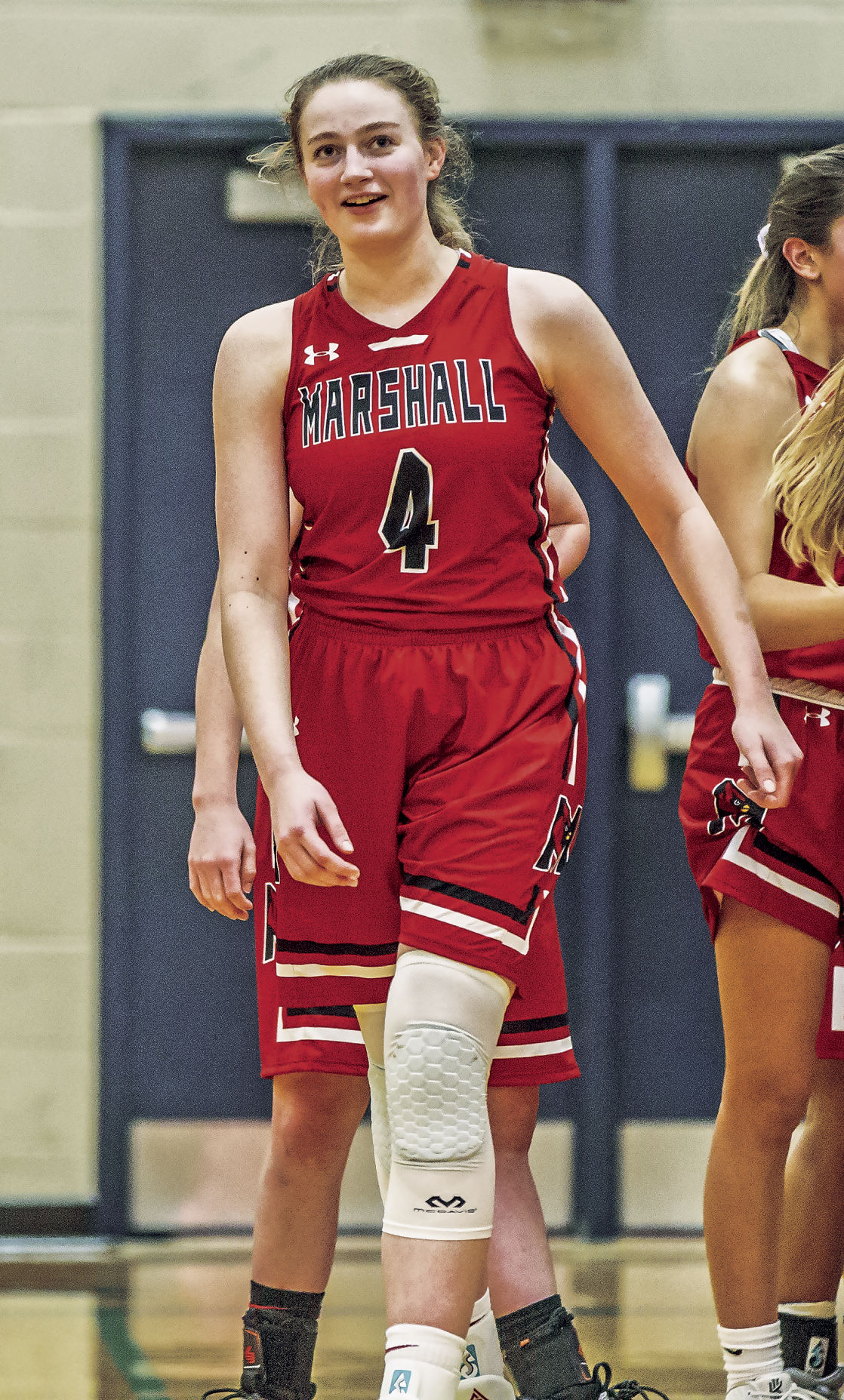 With this basket late in the first half, Anna Lutz set the new scoring record for the Marshall girls' basketball program. Lutz scored 28 points on the night to lead the Cardinals to a 70-33 victory over the Wildcats of Belleville.

Anna Lutz surpassed Bakken’s mark of 1273 tonight, scoring 28 points in a blowout win over the Wildcats of Belleville.

Lutz got the Cardinals off to a hot start, scoring 11 of the team’s first 18 points as Marshall jumped out to a 30-4 lead. Marshall thoroughly controlled the game at both ends of the court, ensuring Belleville never had a chance to get anything going.

“Defensively, we really stopped what they wanted to do… I thought out kids were very active and forced turnovers,” said Pickarts. “On the other end, I thought our movement was so much better. We were passing the ball and made things happen.”

With Marshall holding a big lead, it was only a matter of time before Lutz – needing 17 points to set the new record – surpassed Bakken. The moment came with 5:05 left to go in the first half on a shot from the right side of the paint, followed immediately by a timeout from the Cardinal bench.

“We tried to keep it hush-hush as much as we could… So when I called the timeout, she didn’t even know,” Pickarts said.

“I wasn’t really paying attention to it very much…” added Lutz. “It’s super, super cool. To have my name up there with all those great players, it’s an honor. I really couldn’t have done it without my teammates.”

The Cardinals went into halftime with a commanding 49-15 lead, which only grew as play resumed in the second half. When Marshall pulled their starters with just over 10 minutes left to play, the Cardinal lead stood at 66 to 21; Lutz personally outscored the Wildcats by seven at that point.

With a running clock in place, the remainder of the game went quickly, and by the end, Marshall emerged with a 70-33 win.

“It’s really awesome,” Lutz said of setting the record in such a big team win. “When I scored my 1000th point, it was kind of a letdown because we lost. To do it in a game like this was amazing.”

Adding to Marshall’s total behind Lutz’s 28 points were Laura Nickel with 13 and Mya Andrews with 10. Abby Ward chipped in nine points, followed by Ally Rateike with five. Sandra Assaba and Rain Held tallied two points, while Grace Hellenbrand rounded out the scoring with one point.

The Cardinals, now 13-4 (6-0 Capitol South) will be able to savor tonight’s win until next Thursday, when they head to Waterloo to take on the Pirates. Tip time at Waterloo High School is scheduled for 7:30 p.m.