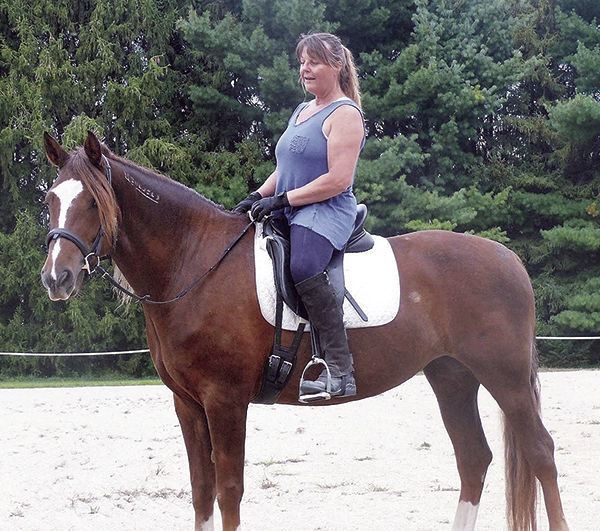 Lori Anderson rides her mustang mare, Adrija, who was adopted in 2016. Anderson said it took several months before the wild horse accepted Anderson’s touch. Now the horse, who is 6, and Anderson compete in dressage events.

Colt Khiimori was adopted by Lori Anderson in 2018. Though the young mustang was sick when he arrived in Waterloo, the animal was willing to be touched by humans. Anderson has not started training the equine, who is now 3, but plans to once he is older.

Lori Anderson rides her mustang mare, Adrija, who was adopted in 2016. Anderson said it took several months before the wild horse accepted Anderson’s touch. Now the horse, who is 6, and Anderson compete in dressage events.

Colt Khiimori was adopted by Lori Anderson in 2018. Though the young mustang was sick when he arrived in Waterloo, the animal was willing to be touched by humans. Anderson has not started training the equine, who is now 3, but plans to once he is older.

There are approximately 72,000 wild horses in the United States, according to the March 2019 estimate by the nation’s Bureau of Land Management (BLM). The BLM manages wild horse herds across 27 million acres of public lands located in 10 western states.

According to the BLM, part of the agency’s responsibility is to reduce the overpopulation of these wild horses to protect the health of the animals and land. Part of the strategy to thin the herd is to place the creatures up for adoption.

That is how a pair of mustangs came to live with Waterloo resident Lori Anderson.

While the phrases mustang and wild horses often can startle people into thinking the four-hooved animals can be difficult to train, Anderson has found success with her pair of mustangs.

Anderson, originally from Oconomowoc, adopted her first mustang, a mare named Adrija, in 2016.

“I have been riding her a couple of years now and she is awesome,” the Waterloo resident said.

However, Adrija, now 6, was not ready for riding when Anderson brought her home since wild horses have never been touched by people.

To help the mare get acclimated to her, Anderson spent time in Adrija’s stall but not touching the horse. Then she used her body language and voice commands to get the equine to move about the stall before Adrija allowed Anderson touch her.

“I was so careful with training her,” she said.

Now, the Waterloo resident competes with the older mustang in dressage events.

Her second mustang, a colt named Khiimori, was adopted in 2018. Currently 3 years old, he needed to be approached differently than Adrija. The horse was sick when Anderson adopted him and his feet were in bad shape.

“He was smaller and easier to walk up and pet his face,” she said. “I could pet him all over but when I tried to pick up his feet, he kicked a couple of times.”

Khiimori will begin his training once he gets a bit older, Anderson said.

“Once you train a couple of wild horses, you never look at a horse the same way,” she said.

Anderson had plenty of experience to prepare for training the wild horses since the Waterloo resident has been working with the animals nearly her entire life.

Anderson remembers that from the age of 4 until 6, she would cry to her parents to buy her a pony. At 6, she received her wish on Christmas.

“We trained it ourselves in the backyard, we were self-sufficient,” she said. “(Getting a horse) was just something that was going to happen. It was just a matter of when.”

The Waterloo resident recalls when family member or friends had horses when she was younger, Anderson would help determine what was preventing the equine from performing.

“I just had a knack for figuring horses out when other people couldn’t,” she said.

She moved to a farm just outside the Waterloo city limits in 2013 but has been operating Sport Horse Therapeutic Services since 2007.

One of her current missions is to help people keep the horses they have because “chances are you’re going to get another and the same thing is going to happen again. You need to figure out what’s not working.”

Anderson said training problems could stem from a variety of causes such as the horse’s environment, a difficulty in connecting with a person, an improperly fitting saddle, a sense of fear, or a horse who doesn’t want to listen.

Anderson has been involved in more work with horses beyond training; she is certified in equine massage and as a saddle fitter. She studied equine massage therapy in 2007 where she learned many horses were having problems due to ill-fitting saddles.

“The more I learned, the more I thought ‘I need to learn saddle fitting,’” she said, noting at the time there was only one person in the state who was a certified saddle fitter. “I went to school, I traveled all around the United States … and learned saddle fitting and English saddle reflocking, which is when you put the wool in the panels and make it fit the horse’s back better.”

Anderson said while some people think having a saddle fitting is a luxury, the correct or incorrect saddle can impact the horse’s performance.

She’s also served as a therapeutic riding instructor; a field Anderson is hoping to get back in to.

“There are a lot of things I want to do to this place and open it up to other people so they can enjoy it as much as I am,” the Waterloo resident said.