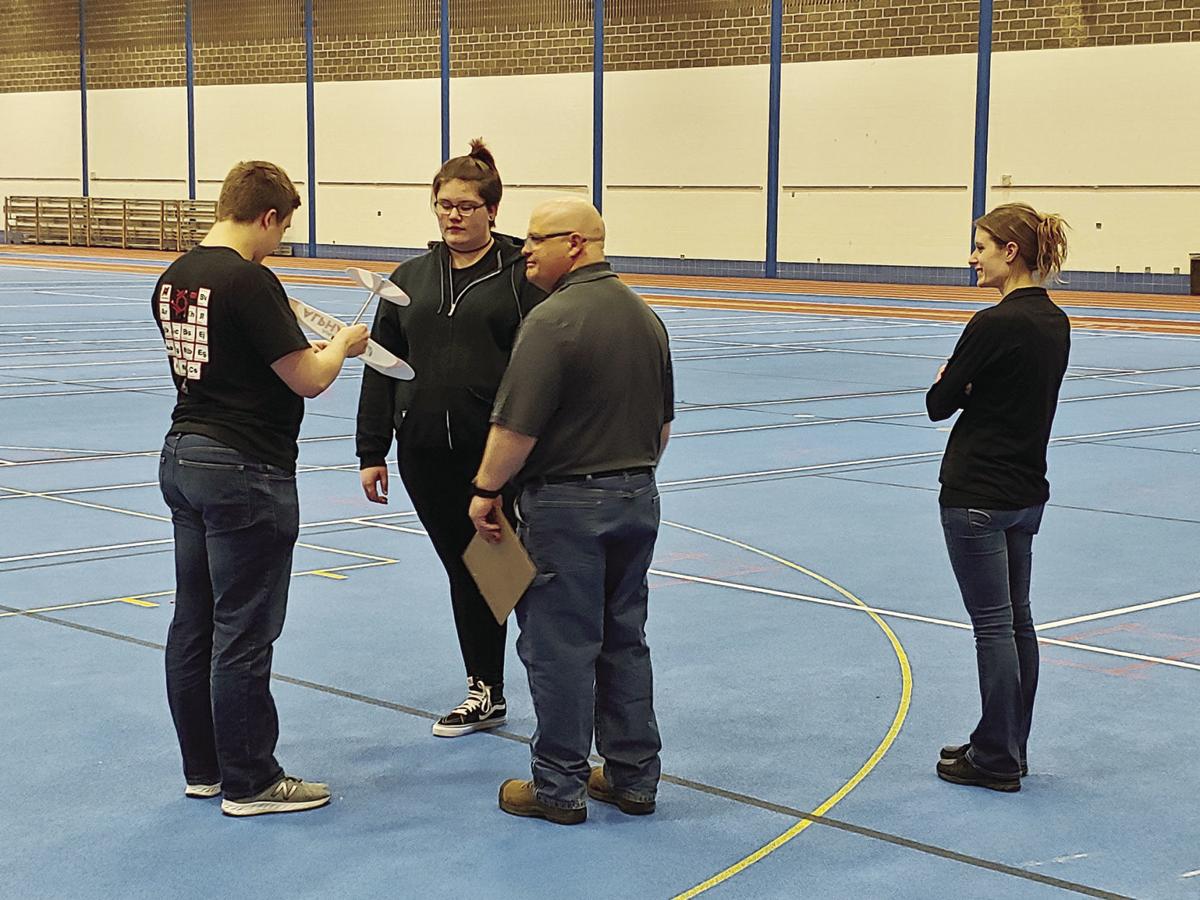 Marshall students Burke Vukasovic, left, and Kasey Guild, right, meet with event supervisors in the aerial scramble at the state Science Olympiad competition. The students placed ninth in the category. 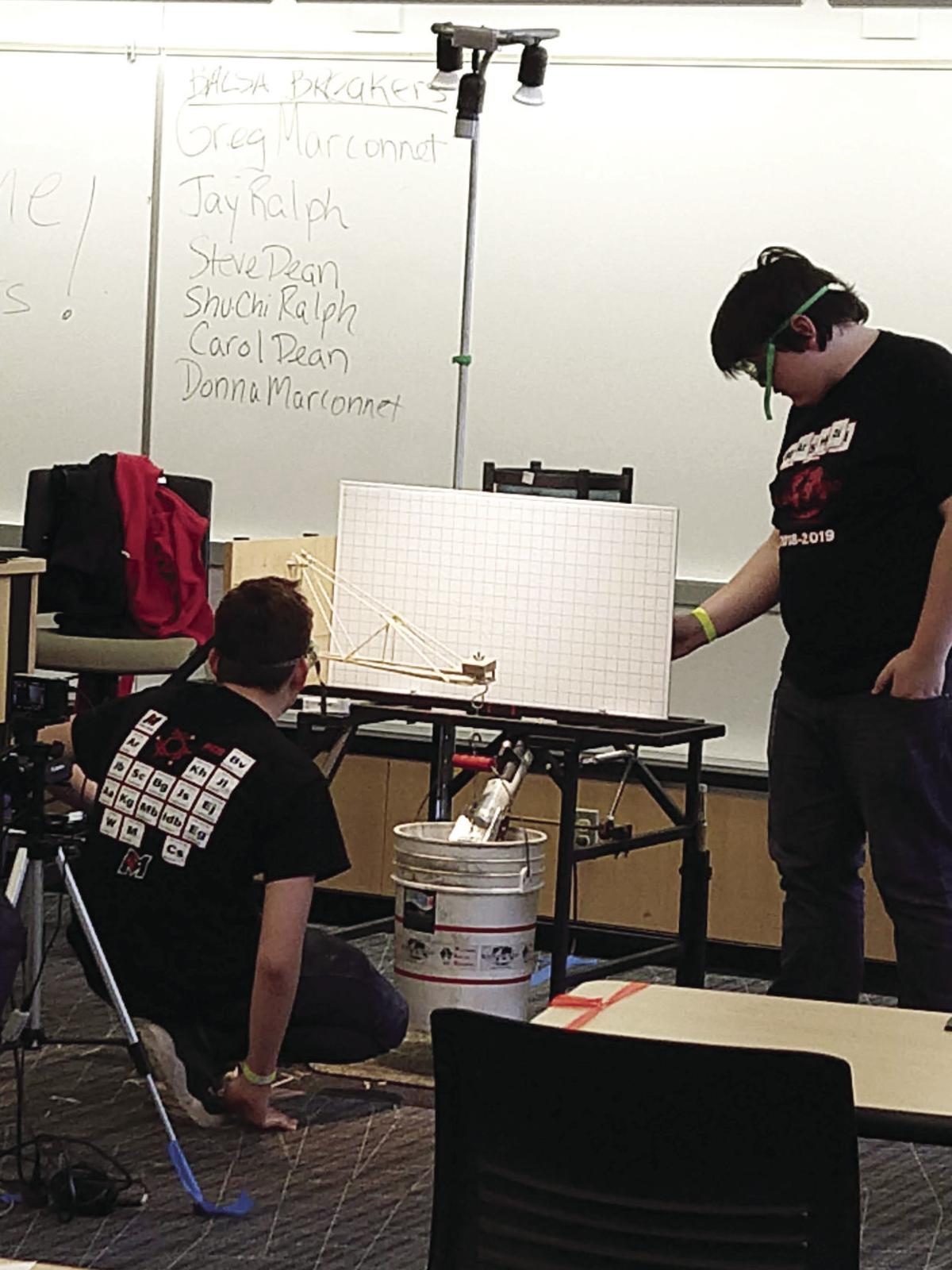 Jacob Burke, left, and Alex Roll, both from Marshall High School, competed in the boomilever category at the state Science Olympiad competition March 16. 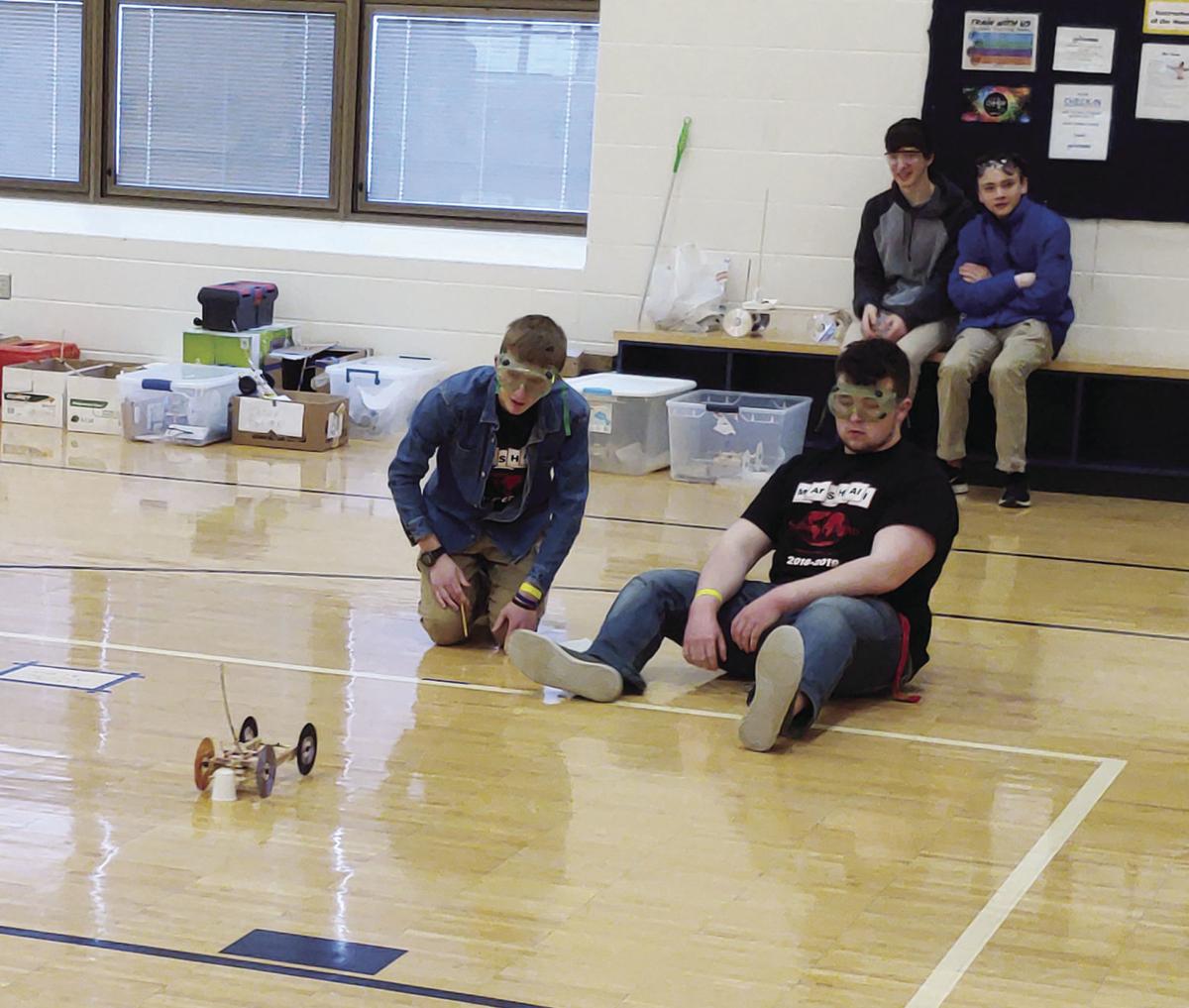 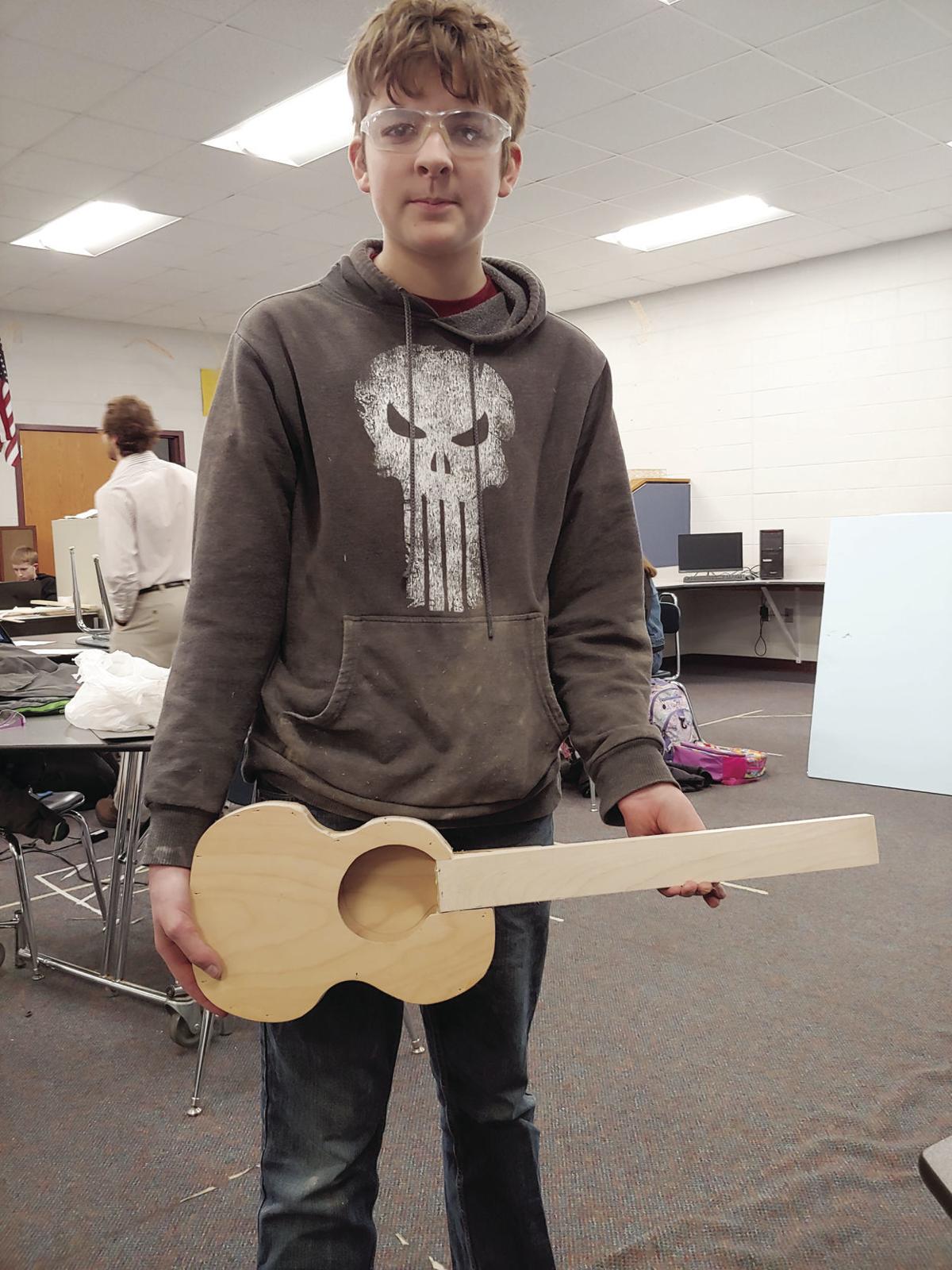 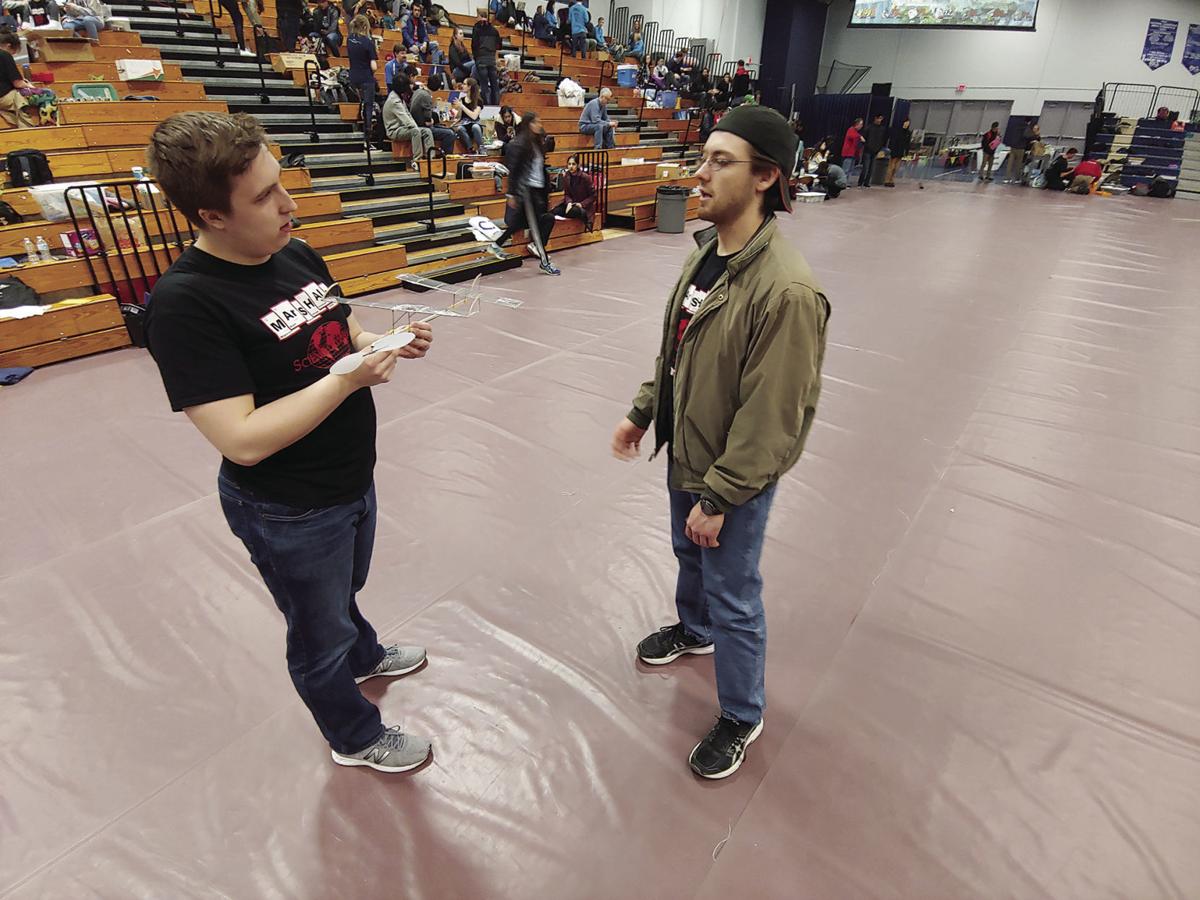 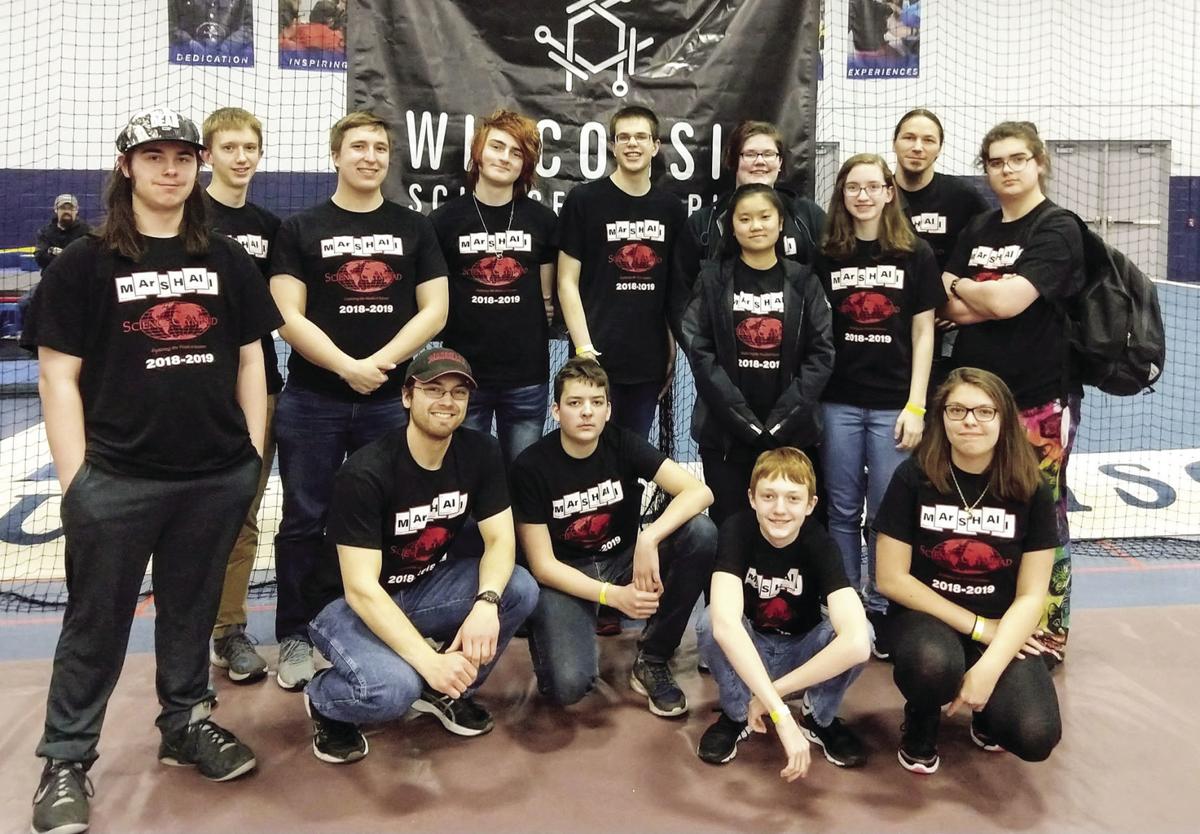 Marshall students Burke Vukasovic, left, and Kasey Guild, right, meet with event supervisors in the aerial scramble at the state Science Olympiad competition. The students placed ninth in the category.

Jacob Burke, left, and Alex Roll, both from Marshall High School, competed in the boomilever category at the state Science Olympiad competition March 16.

Each year the Marshall High School Science Olympiad team has categories that usually need a little bit of explaining such as codebusters, aerial scramble or the circuit lab competition. And this year was no different.

“Mousetrap vehicle?” Debbie Frigo, school board vice president, asked at the Feb. 20 meeting before approving the organization’s overnight trip request at the University of Wisconsin-Stout.

“The object (of the mousetrap vehicle competition) is to not catch a mouse,” Ethan Jennings, high school participant, explained.

It is not actually for trapping but the mouse trap is used for powering the vehicle with energy stored in the mouse trap, he said.

“This is the opportunity to do something different,” Jennings said. “It is just fun.”

While the mousetrap vehicle event is not necessarily a new category, they don’t offer it each year, high school science teacher and Science Olympiad coach Joe Wells said.

According to the Science Olympiad website, mousetrap vehicle is a competition where the vehicle is powered by one or two mousetraps, and that the vehicle pushes a 3-ounce paper cup eight meters down a track, it reverses direction and then having it stop as close to the vehicle target point as possible. There is a judging criterion used. The construction parameters need to be met and the cut and the vehicle needs to be measured.

Wells said that the students work all year to learn their vehicle inside and out and to make adjustments. There are kits that can be used, but students can experiment, make adjustments and look at, if available, what other students did in the past.

“It is physics, engineering and fun to watch,” Wells said. “These kids spent months doing this.”

The 14-member team perfected their competition projects and applied skills they learned in leadership, teamwork, chemistry, biology, physics and engineering. For some students, it is good preparation for college and a career. And for others, it is just plain fun.

Joshua Link, who wants to be a forensic scientist, participated in the forensics competition for the Science Olympiad at the state level.

Link explained it as a crime scene investigation, where he did finger print investigation, made some DNA investigation and used his advanced placement biology and chemistry background to figure out who did the crime.

“I love the application of physics, chemistry and biology to figure out the questions,” Link said. “I very much enjoy it,” he said.

The goal the team sets for themselves is to finish in the top 10, but with the level of competition, it can be tough.

Kasey Guild, Matthew Brodbeck, and Sandy Chen took ninth place in codebusters. In the aerial scramble, the students had to construct and fly two rubber-powered monoplanes while in the codebusters, students had to decode or encode encrypted messages with certain advanced ciphers without using a scientific or graphic calculator.

“It is all really problem-solution, figuring out a solution and testing it to determine which one is best,” Wells said.

The Science Olympiad season runs through October though the state competition is held in the spring.