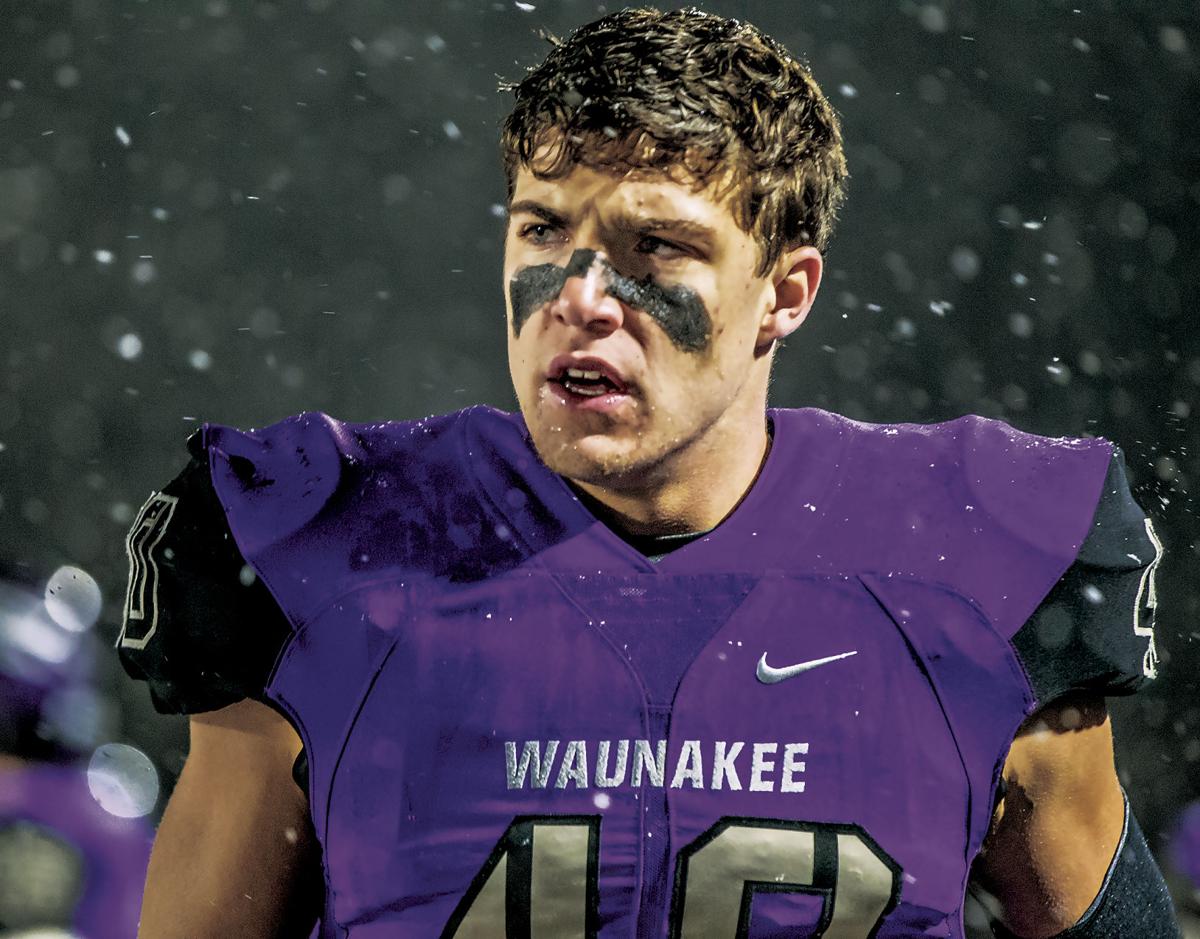 Jeb Frey looks on as the Warrior offense takes the field early during the first quarter of Waunakee's Level 2 contest against Milton. 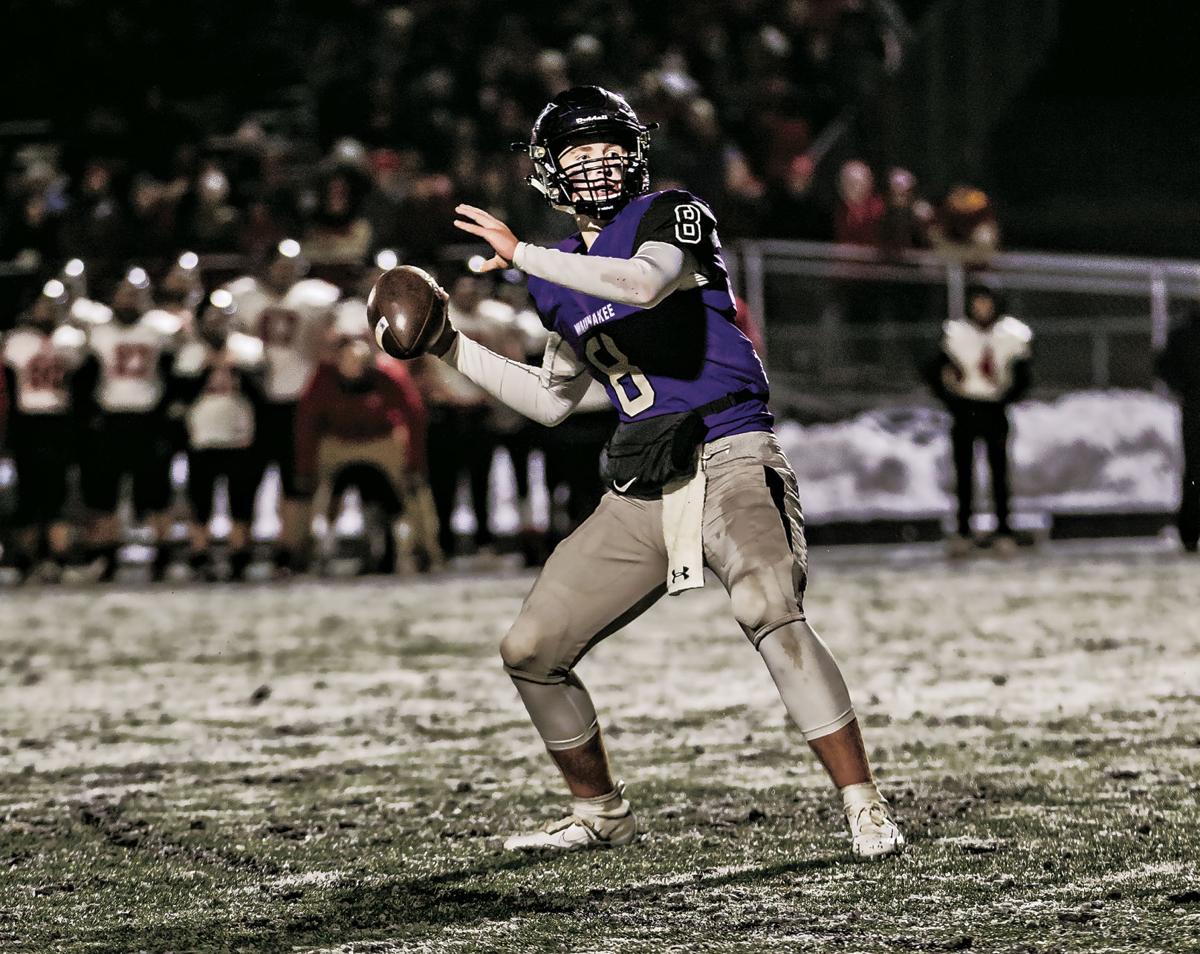 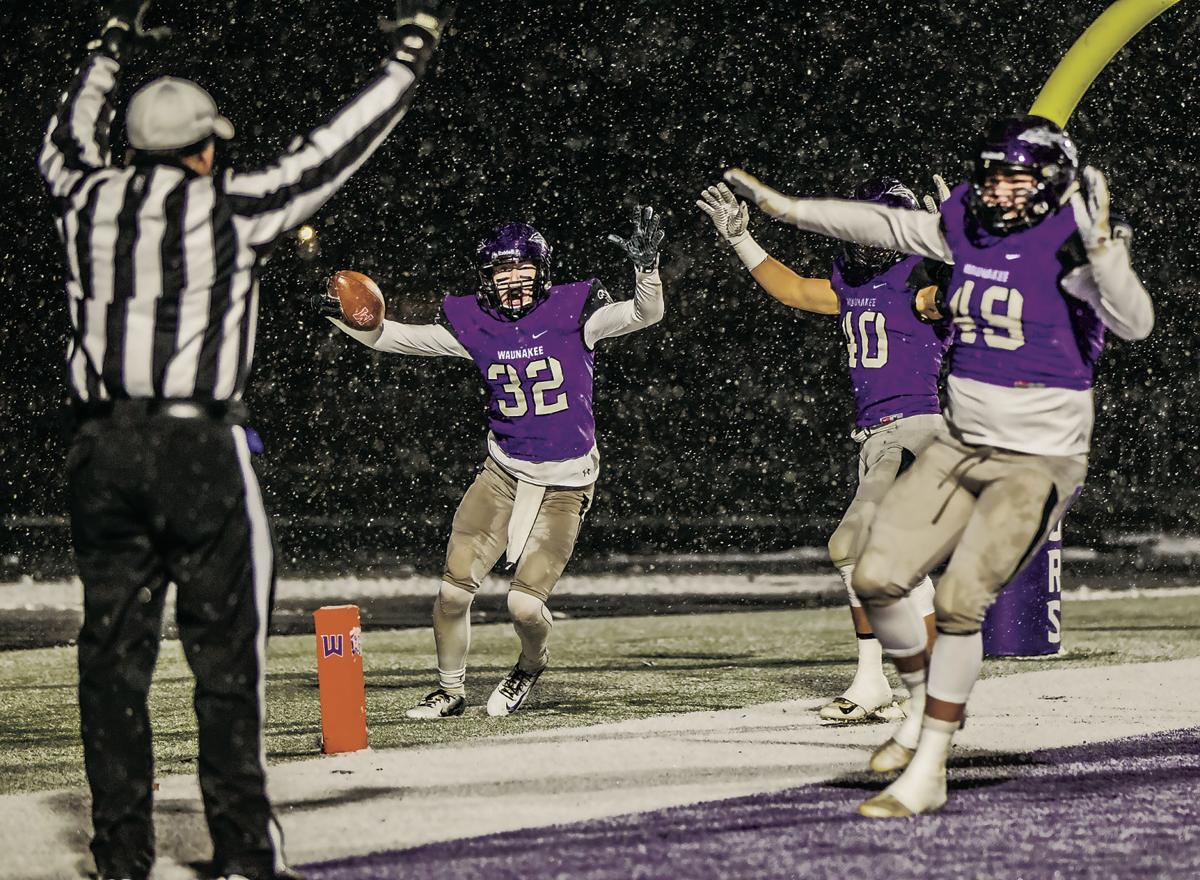 Randy Vojtisek and the Waunakee punt return team react after Vojtisek recovered a blocked punt in the end zone, tying the game 7-7 in the first quarter against Milton.

Jeb Frey looks on as the Warrior offense takes the field early during the first quarter of Waunakee's Level 2 contest against Milton.

Randy Vojtisek and the Waunakee punt return team react after Vojtisek recovered a blocked punt in the end zone, tying the game 7-7 in the first quarter against Milton.

It’s been the Waunakee football team’s mentality all season, but the stakes have yet to be so high as they were for the Warriors tonight. The Warriors endured a handful of injuries Friday night, but found a way to overcome them all in a come-from-behind victory over the Milton Red Hawks in their WIAA Level 2 contest.

“There’s been some really big wins up at Warrior Stadium: signature wins,” said Waunakee’s Head Coach Pat Rice. “This one was big… It was one of the special nights.”

Milton’s typically run-heavy offense caught fire through the air in the first half, connecting on a handful of deep passes.

Both teams traded punts on their ensuing possessions; it was on Milton’s first punt of the game where Waunakee’s special teams struck for the first time. Joe Hauser blocked the Red Hawk punt, and there to recover in the end zone was Randy Vojtisek. After Aidan Driscoll’s PAT, the score was tied at 7 heading into the second quarter.

Once in the second, Milton’s wasted no time making fireworks. Jordahl found Dane Nelson twice in less than four minutes – on scoring passes of 81 and 97 yards – to give the Red Hawks a commanding 21-7 lead over the Warriors.

The teams traded punts once more; a short punt from deep within their own territory put Waunakee within striking distance: on Milton’s 36-yard line with 4:45 until halftime.

With starting quarterback Caden Nelson forced to the sideline with an injury, backup Quentin Keene stepped in, facing a two-score deficit.

“I’m nervous, obviously…” said Keene of his thoughts stepping into the tough situation. “Then again, I’m comfortable with the guys around me. They’re confident in me; I’m confident in them. Andrew Keller, Caden Lewis, Hayden Blang. All the linemen: Forrest [Anderson], [Ben] Benusa, Wyatt [Ziegler], [Jordan] Burrell and [Thomas] Meffert: it’s easy to make plays around them.”

Alec Morgan found paydirt with 2:18 to go before halftime, bringing the Warriors within one score of the Red Hawks.

Milton’s air attack struck again late in the quarter, putting the Red Hawks in position for a field goal with only seconds left. For the second time, Waunakee’s special teams came up with a block – this time from Jacob May – to preserve the 21-14 score.

A rejuvenated Warrior defense took over in the second half. Waunakee forced three straight three-and-outs to open the half, giving their offense a chance to make the comeback.

“Really proud of how we made adjustments in there, kept business-like in there, stayed together in there, and made plays,” said Rice. “It was a group of kids that grew up and really deserve a lot of credit for what they were able to accomplish together.”

Keene – who returned to the game after enduring a minor injury himself – punched in the tying score on fourth and goal from inches away, capping off a 77-yard drive where he found fellow sophomore Andrew Keller a pair of times to jump-start the offense.

“We’re best friends off the field, so it’s easy to have that chemistry on the field…” Keene said of the connection between him and Keller. “You’ve just got to know where he’s going to be, and we’ve got that down now after two years of playing together.”

Waunakee’s second score of the quarter came on a 16-yard scamper by Cole Mobley – who was filling in for the sidelined Morgan – to give the Warriors their first lead of the night. When time expired in the third quarter, Waunakee was riding a wave of momentum after turning a seven-point deficit into a seven-point lead.

“In particular, [I was] proud of the offensive line and how they really did some stuff that was pretty impressive against a good front,” added Rice.

In their first possession of the quarter, Keene directed one final drive into the end zone. This time, he capped the drive with an eight-yard scoring toss to Caden Lewis to put the Warriors up 35-21.

Milton wasn’t quite finished, though. Down 14, Jordahl and company converted on a fourth and six on their ensuing possession to stay alive. Just a handful of plays later, Jordahl found the end zone with his feet for the second time of the night to pull the Red Hawks back within one score.

Down 35-28, Milton’s defense scored a stop on their ensuing possession to give them one final chance to tie the ballgame. Confronted with a fourth and eight, Jordahl’s final pass of the night fell incomplete.

Waunakee took over with 1:57 to play and the defense was able to run the clock down to zero to secure the win.

Keene racked up 141 yards through the air on five of seven attempts passing, while Keller led the Warriors with 96 receiving yards on three catches. Cole Mobley was the game’s leading rusher, racking up 110 yards on 21 carries.

“I could not be more proud of these guys…” said Rice. “A lot of adversity, a lot of things we had to play through. A lot of teams would have tapped out; we did not tap out. We found a way to stay in there. It’s a pretty cool win for us.”

The Warriors, now 10-1, advance onto next Friday’s quarterfinal matchup at Hartford. Kickoff in Hartford is scheduled for 7 p.m.