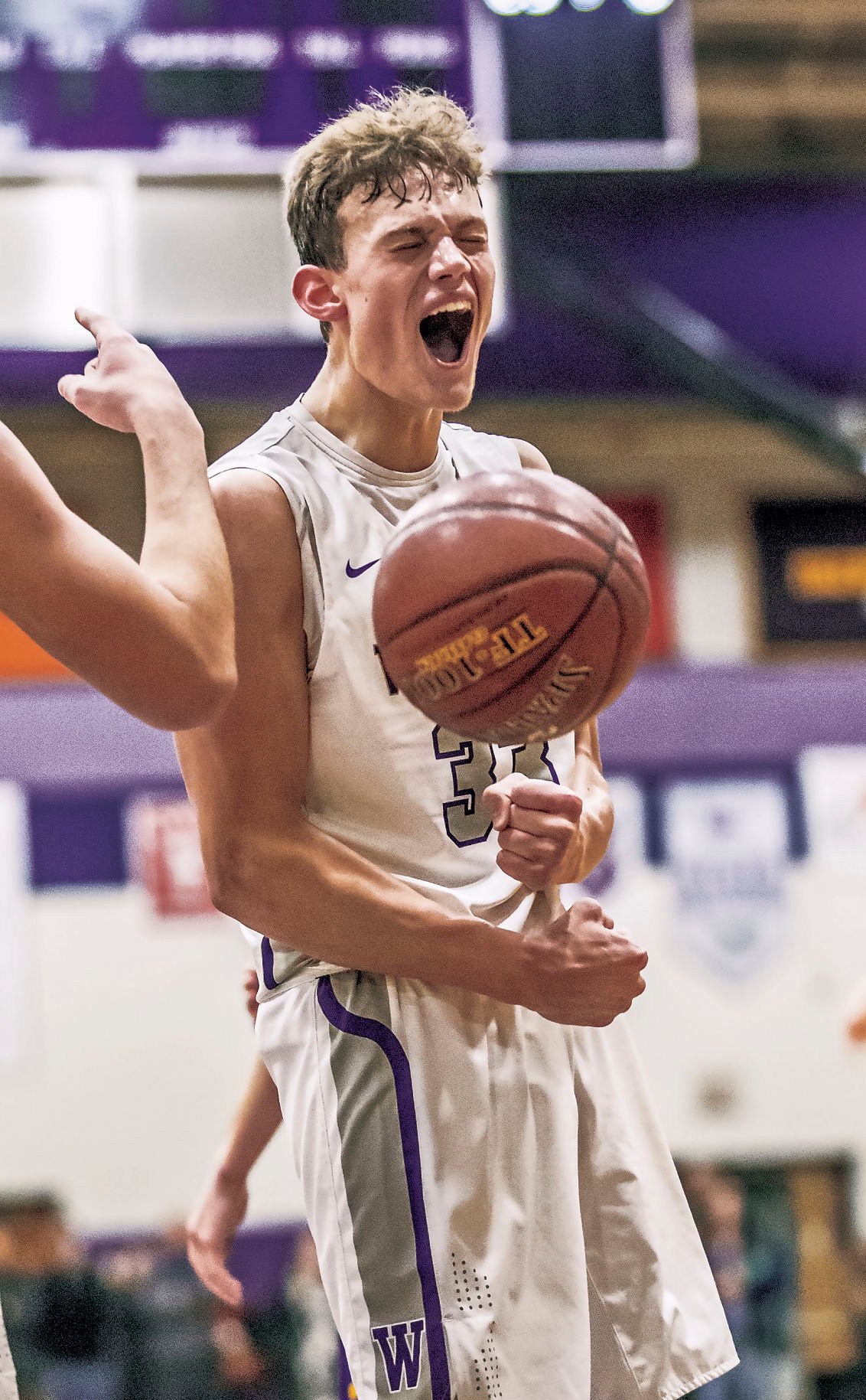 Andrew Keller celebrates after sinking a late basket through contact and a foul against the Norskies on Saturday. Keller led all scorers with 22 points in Waunakee's 57-54 victory. 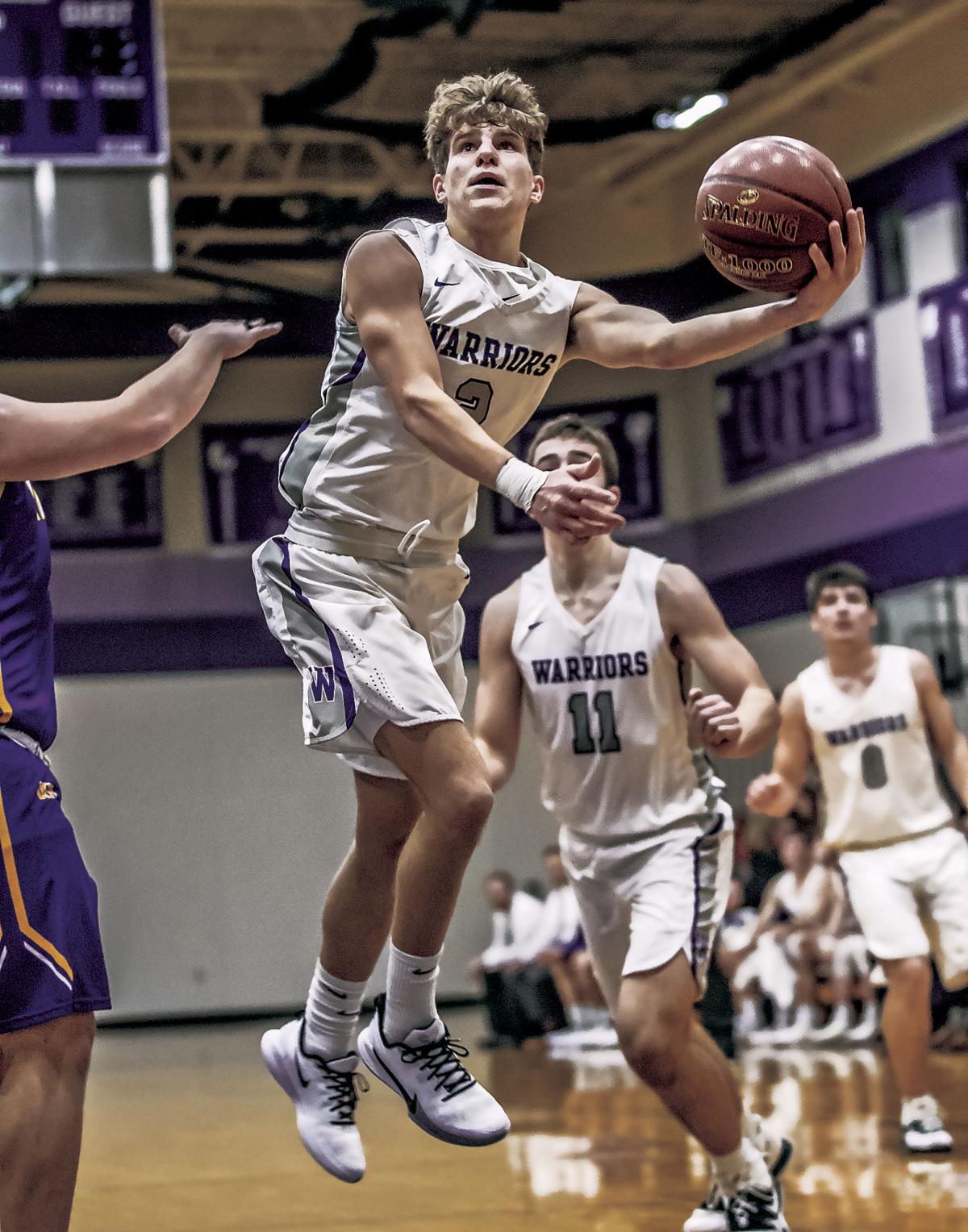 Jaxson Zibell puts up a shot late in the first half against DeForest. Zibell tallied 14 points on Saturday in Waunakee's 57-54 victory over the Norskies.

Andrew Keller celebrates after sinking a late basket through contact and a foul against the Norskies on Saturday. Keller led all scorers with 22 points in Waunakee's 57-54 victory.

Jaxson Zibell puts up a shot late in the first half against DeForest. Zibell tallied 14 points on Saturday in Waunakee's 57-54 victory over the Norskies.

Any time DeForest steps into Waunakee’s gym, it’s going to be a battle.

Add in the fact that both teams came into Saturday’s boys’ basketball contest tied atop the Badger North, and the stakes were raised even further. In the end, The Warriors pulled out a close game to remain atop the conference standings.

The Warriors consistently held a narrow advantage throughout the first half; though they never trailed after the first four minutes, the lead was never substantial.

With three minutes to go until halftime – with Waunakee up 24-21 – Jaxson Zibell ensured the Warriors took a lead into the locker room. Zibell hit a pair of threes in the final two minutes to give his team a nine-point advantage.

DeForest shaved the lead to seven points in the final seconds of the half, however, making it a 30-23 game at the break.

Coming out of halftime, the Warriors looked like a team on a mission. Waunakee opened the half on an 8-2 run, extending their lead to 13 points: 38-25.

“Get to the rim, attack and get them on their back feet,” Waunakee forward Andrew Keller said the team’s mentality was coming out of halftime. “Keep the pedal to the gas and keep going hard.”

A 6-1 DeForest squad – ranked eighth in the state in Division 2 – refused to go away quietly. Their high-scoring duo of Trey Schroeder and Max Weisbrod – averaging nearly 30 points per game entering Saturday’s contest – was held in check by Waunakee’s defense, limited to just two points in the first half.

“We sagged off a lot of guys and really focused on [Schroeder and Wiesbrod],” Keller said of Waunakee’s defensive strategy. “We made other guys beat us; we knew they were the top two scorers, and we knew that they could be special with the ball.”

The Norskies elevated their defensive pressure as the second half wore on, forcing a handful of eight-second violations. That, in addition to finding the bottom of the basket on difficult shots, allowed the Norskies to cut Waunakee’s lead to just five points with four minutes remaining.

Needing a play to slow DeForest’s momentum, Keller delivered. Waunakee’s sophomore forward drained a shot through contact – and a foul – with 3:43 to go, and went on to hit the ensuing free throw, putting Waunakee up 53-47.

“It was a big momentum turner…” Keller said of the three-point play. “They were going on a little run, and that stopped it. We were able to finish it out from there.”

The Norskies came as close as one point, but could never quite complete the comeback. Some clutch defensive plays – including a charge drawn and last-second defensive stop – in the final minute sealed the victory for the Warriors.

Keller led all scorers on the night with 22 points, followed by Jaxson Zibell with 14. Casey Fischer chipped in 10 points, while Caden Hough added nine. Caden Nelson rounded out the scoring with two points.