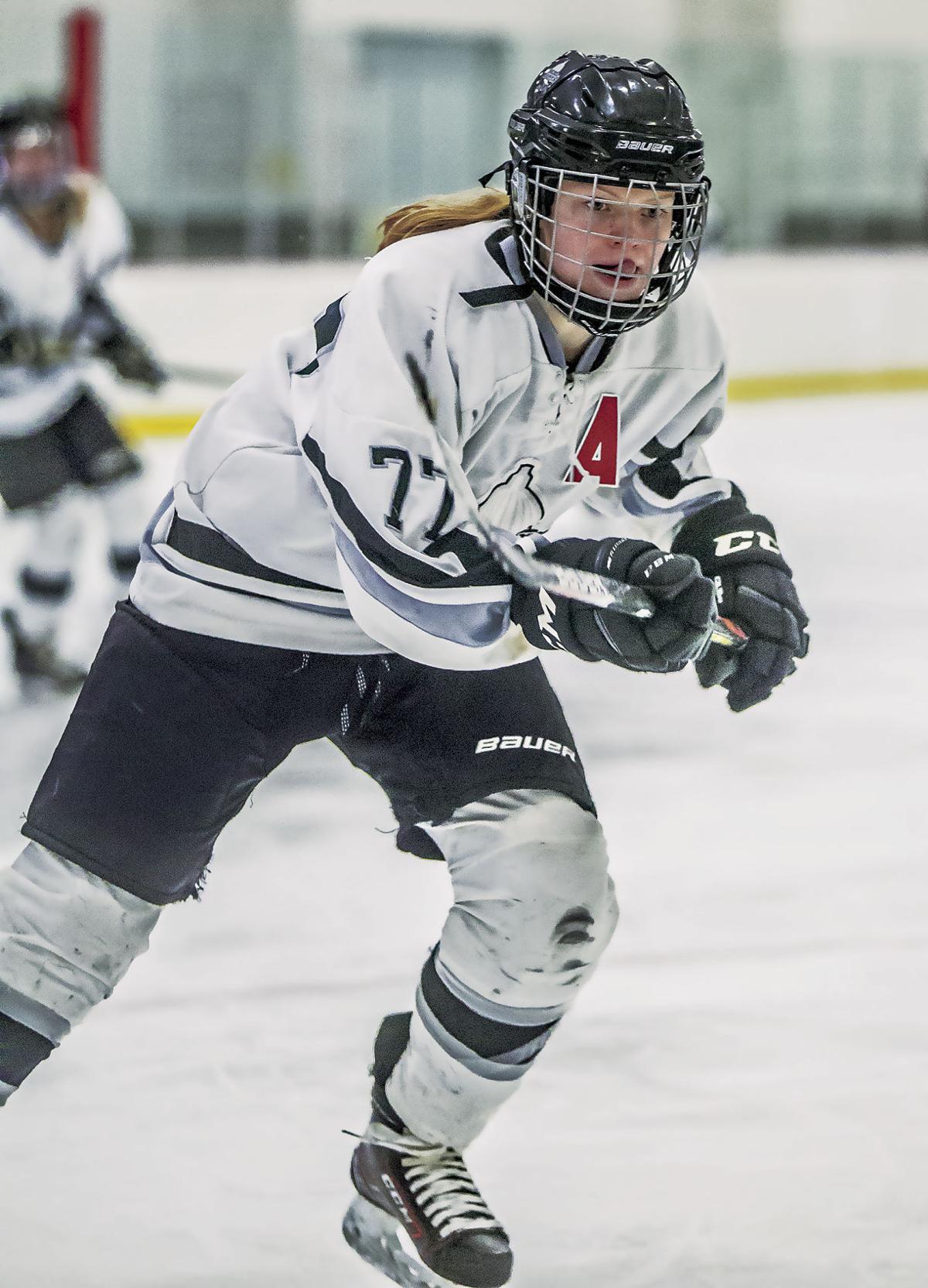 Amanda Bauer skates toward the puck during the first period of Cap City's contest against Brookfield on Saturday. Bauer recorded a hat trick in the Cougars' 8-2 win. 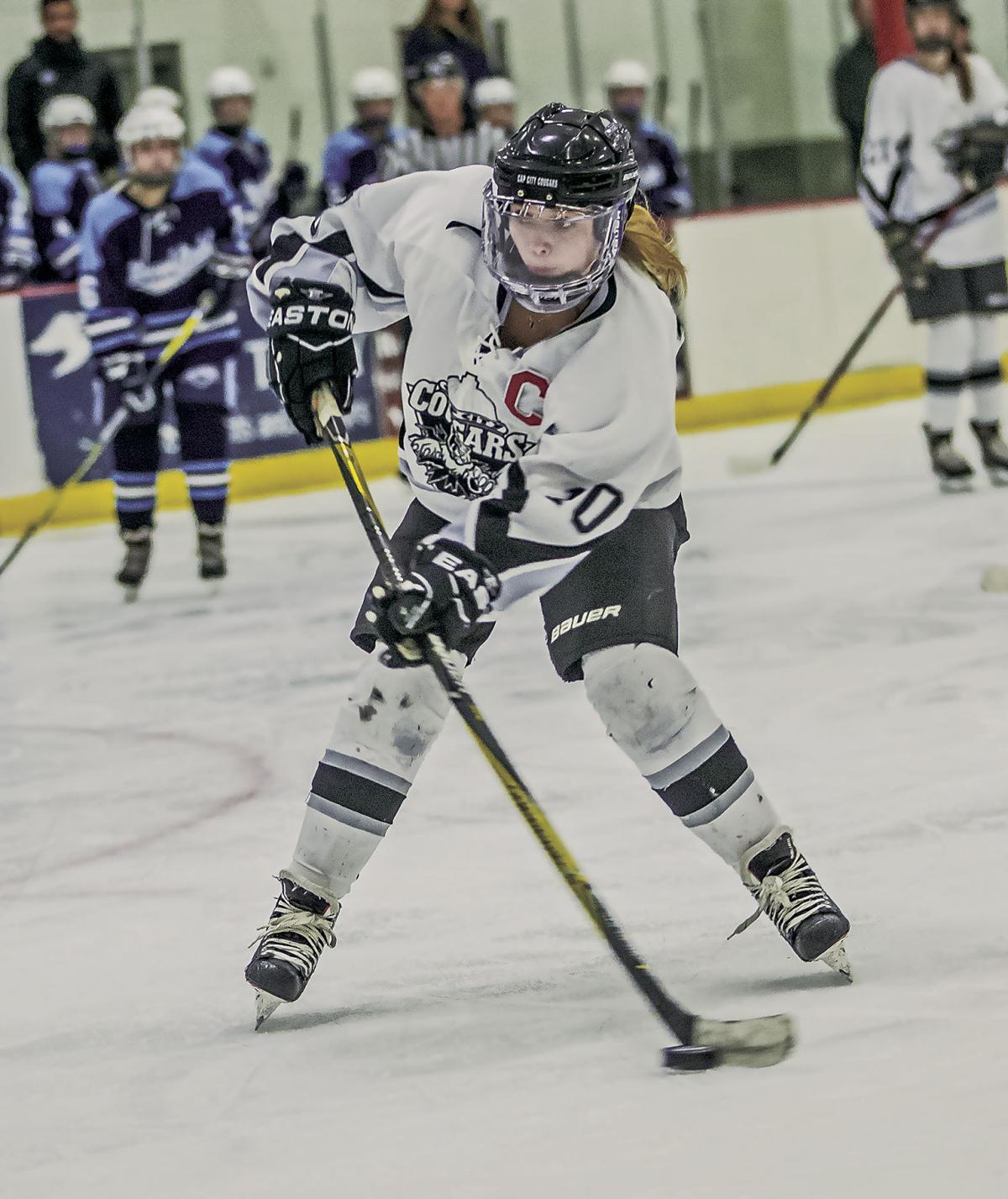 Zephryn Jager fires a shot towards Brookfield's goalie in the third period of Cap City's 8-2 win. Jager was one of two players to record hat tricks for the Cougars on the night.

Amanda Bauer skates toward the puck during the first period of Cap City's contest against Brookfield on Saturday. Bauer recorded a hat trick in the Cougars' 8-2 win.

Zephryn Jager fires a shot towards Brookfield's goalie in the third period of Cap City's 8-2 win. Jager was one of two players to record hat tricks for the Cougars on the night.

The phrase “trap game” was made for matchups like the Cap City Cougars’ contest on Saturday night against the Brookfield Glacier.

Brookfield came into the game with a 1-14 record. The Cougars, on the other hand, were riding a four-game winning streak and had a date with the Madison Metro Lynx looming. Suiting up for the Glacier, however, is one of the state’s top goal-scorers: Hadley Malcolmson, making them a dangerous team if overlooked.

Cap City’s typically prolific offense – averaging more than eight goals per game – was quiet early. The Cougars went nearly the entire period without finding the back of the net, giving the Glacier a chance to stick around.

“We tend to start slow; our second period has been our best period all year,” said Cap City’s Head Coach Jeff Thornton. “We’re trying to fix it, but in games like this when the girls to a little bit of scoreboard watching before the game, we play down sometimes.”

The Cougars finally did beat Brookfield’s goalie, scoring twice in the final three minutes before the first intermission. Amanda Bauer scored the first – with assists from Zephryn Jager and Camille Baker – while Jager scored the second on assists from Kallen Gil and Mack Rosin.

True to form, the second period was where Cap City turned on the jets and pulled away from Brookfield. Starting with a goal just nine seconds after intermission, the Cougars scored five in the period, going up 7-2 in the process.

In the second, Cap City saw Bauer score twice to complete the hat trick, followed by goals from Jager, Brynna Banuelos, and Baker.

Twice in the period, Brookfield’s Malcolmson managed to find the back of the net to prevent a shutout for the Cougars.

“She’s a really prolific scorer; you have to watch her hips and not watch her hands,” said Thornton. “A couple times, we were puck-watching, and she made us look silly and put a couple pucks in. She’s the real deal.”

A quick third period – with a running clock – saw Jager record her third goal of the game, giving the Cougars a pair of hat tricks.

In goal, Lexi Holman made a total of 11 saves to earn the victory.

Recording assists on the night for the Cougars were Jager and Rosin with two apiece, followed by Rachel Robbins, Magnolia von Bauer, Gill, Baker, Riley Ledford, Lauren Bliefernicht, and Bauer with one each.

Cap City, ranked second in the state, now boasts a 14-1 record heading into Tuesday’s contest against the Madison Metro Lynx, who are ranked third.

The puck is scheduled to drop for Tuesday’s contest at 7:30 p.m. at Madison Ice Arena.