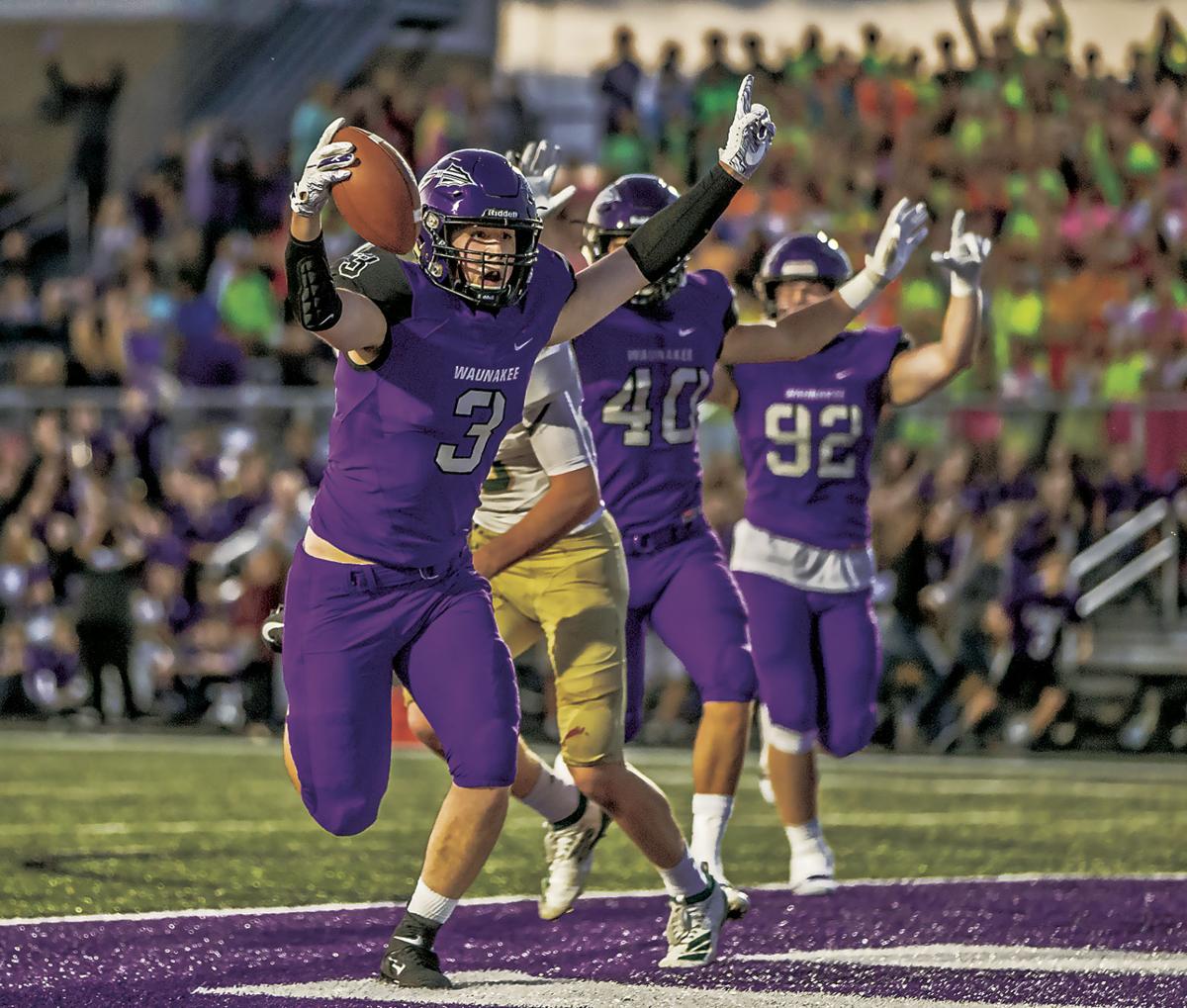 Conner Loy celebrates after returning an interception for a touchdown in the first quarter of Waunakee's contest against Beaver Dam. 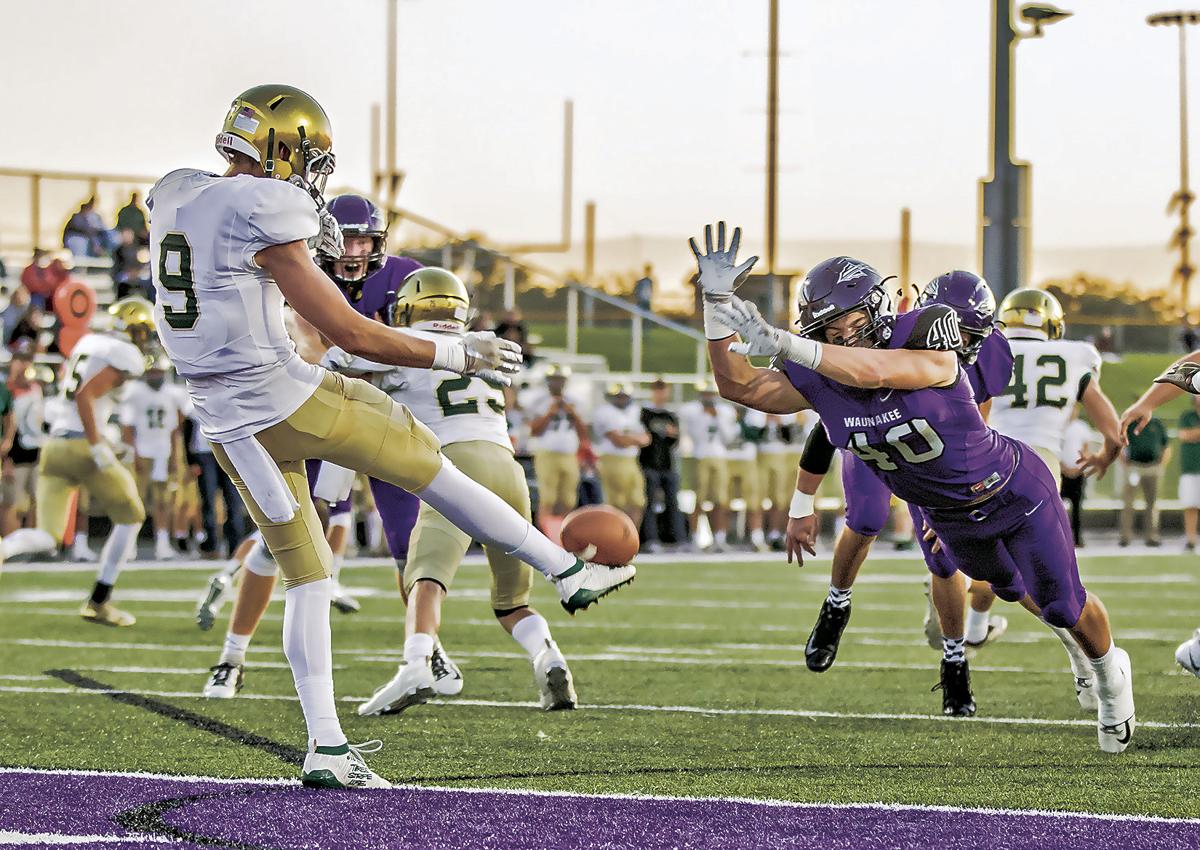 Jeb Frey extends to block a Beaver Dam punt midway through the first quarter. The blocked punt bounced out the back of the end zone, putting two points on the board for the Warriors.

Conner Loy celebrates after returning an interception for a touchdown in the first quarter of Waunakee's contest against Beaver Dam.

Jeb Frey extends to block a Beaver Dam punt midway through the first quarter. The blocked punt bounced out the back of the end zone, putting two points on the board for the Warriors.

Having scored 16 touchdowns the past two games, Waunakee’s offense is no stranger to the end zone. The Warrior defense and special teams wanted to join in on the action; with a safety on a blocked punt, a pick-six and a punt return touchdown, they did exactly that tonight against Beaver Dam.

“Coach Rice preaches it all the time; it’s not just offense and defense. Special teams plays a big role…” said Waunakee linebacker Jeb Frey. “It was great to have that defensive contribution this game: to perform at a level we knew we were capable of.”

After a touchback by Aidan Driscoll, the Warrior defense started out fast, forcing a quick three-and-out to begin the game.

Waunakee’s offense took little time finding the end zone from there, scoring on a 38-yard pass from Caden Nelson to Hayden Blang on their second play. The touchdown was one of three by the Warrior offense in the first quarter; Alec Morgan added a 51-yard touchdown run, and Nelson threw a 38-yard touchdown to Isaac Schaaf.

Sandwiched between Waunakee’s second and third touchdowns, Frey blocked a punt deep in Beaver Dam territory; the ball bounced out the back of the end zone, putting two more points on the board for Waunakee.

“We tried a few different pressures, a few different guys… When I got my call, it was great,” added Frey. “It felt great to have a stop like that and have everybody get hyped… It was everybody on the defense that got that block; it wasn’t just me. I was in the place to do it, but the guys up front pulled their guys the right way, the linebackers were in the right spot, and I just got to hit it at the right time.”

Before the first quarter was out, Conner Loy sniffed out a screen pass, intercepted it and returned it to the end zone to put the Warriors up 30-0.

The Golden Beavers had no luck slowing Waunakee down in the second quarter. Nelson connected on two more touchdown passes – both to Andrew Keller – and Morgan punched another run into the end zone on the ground. Midway through the quarter, backups started filtering into Waunakee’s lineup as the Warriors built a big lead.

“It puts us in great position,” Waunakee’s Head Coach Pat Rice said of so many guys getting playing time. “We had a bunch of kids get a lot of snaps tonight, which are valuable down the road.”

Midway through the second quarter, Waunakee’s special teams put even more points on the board; Lawson Ludwig found the end zone on a punt return from 65 yards out.

Beaver Dam did put a late touchdown on the board before halftime hit, but with a 57-7 lead, there was no doubt about the game’s outcome.

“We really talked about, defensively, we need to get people out on third and fourth down. We let Stoughton convert a bunch, so that was an emphasis all week…” said Rice. “We made big jumps on specials and D.”

With a running clock in place for the second half, the remainder of the game went quickly. Beaver Dam added scores in both the third and fourth quarters, while a one-yard Quentin Keene touchdown run in the fourth capped the scoring for the Warriors.

On the night, Nelson completed five of his seven passes for 163 yards and four scores. Keller led all players with 74 receiving yards and two scores, with Schaaf and Blang right behind with 49 and 38 yards, respectively.

Ben Meinholz was the game’s leading rusher with 79 yards on eight carries, followed by Morgan with 73 yards and Cole Mobley with 44.

Waunakee (3-0, 1-0 Badger North) now turns their attention to Mount Horeb/Barneveld next Friday. The Vikings boast a 1-2 record after defeating Portage in Week 3. Kickoff is scheduled for 7 p.m. at Warrior Stadium.