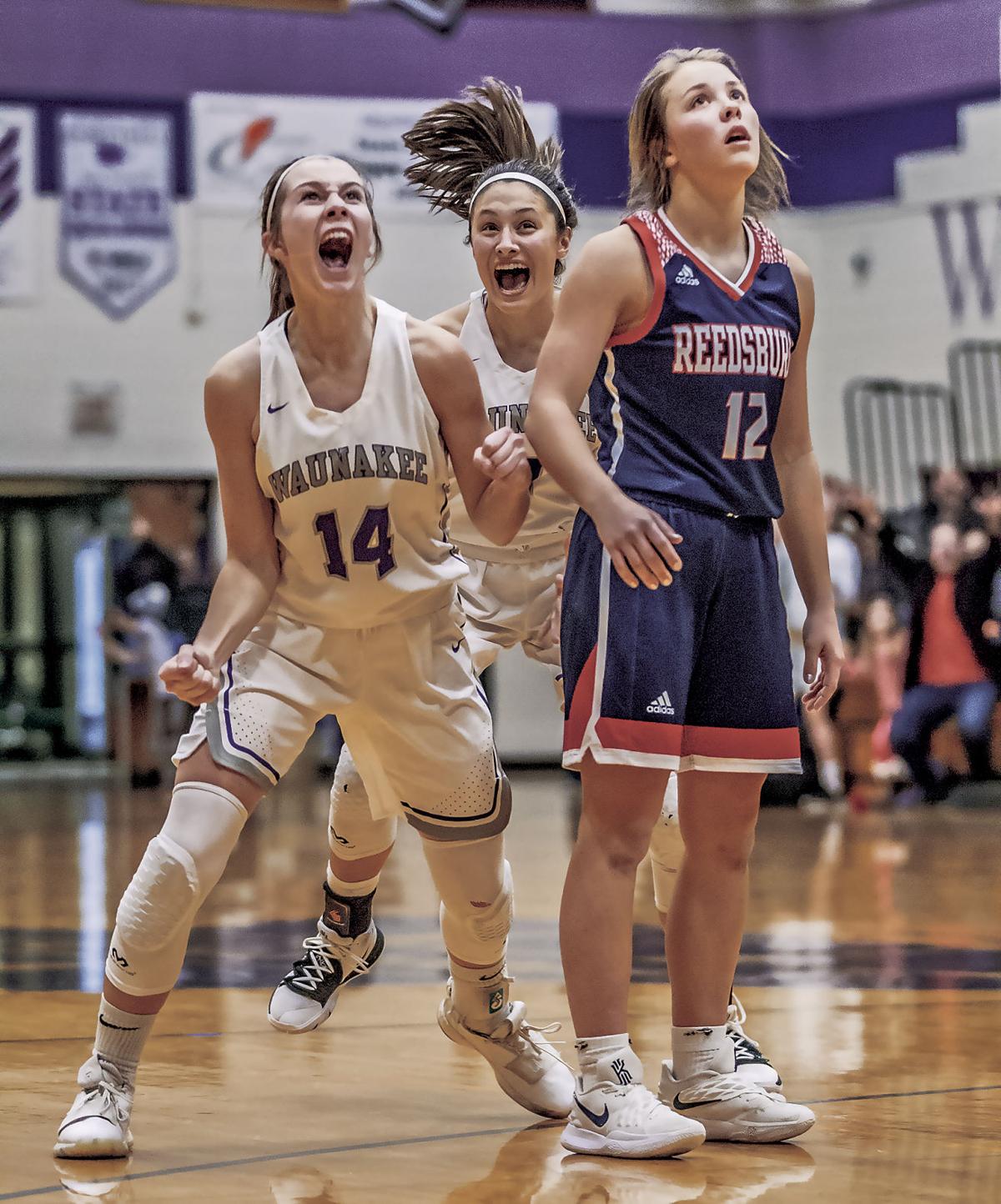 Elena Maier (14) and Lauren Meudt erupt next to a dejected McKenzie Bestor of Reedsburg after Maier's buzzer-beater went in, lifting Waunakee to a 59-57 win over Reedsburg. Maier's 19 points - 16 scored in the second half - were the most by any player on the night. 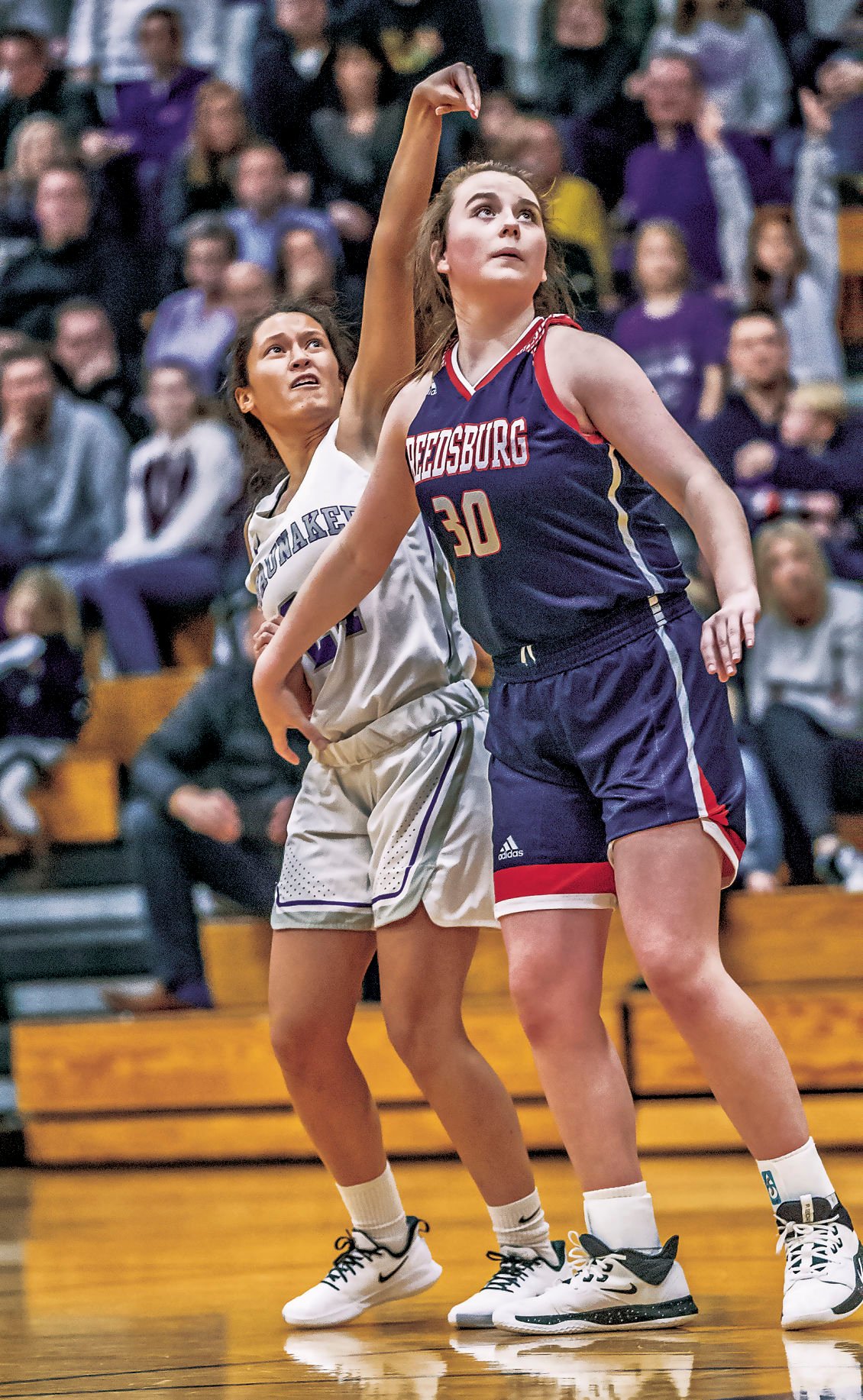 Ebba Harrison watches as her game-tying shot with 6.2 seconds to play drops into the basket. Harrison's shot - her only game action of the night - tied the game at 57-57, setting the stage for a Warrior victory.

Elena Maier (14) and Lauren Meudt erupt next to a dejected McKenzie Bestor of Reedsburg after Maier's buzzer-beater went in, lifting Waunakee to a 59-57 win over Reedsburg. Maier's 19 points - 16 scored in the second half - were the most by any player on the night.

Ebba Harrison watches as her game-tying shot with 6.2 seconds to play drops into the basket. Harrison's shot - her only game action of the night - tied the game at 57-57, setting the stage for a Warrior victory.

Not once, not twice, but three times.

In the final 11 seconds against Reedsburg on Friday night, The Waunakee girls’ basketball team sank a total of three game-tying or game-winning baskets. The wild finish capped the Warriors’ third consecutive victory in most dramatic fashion.

You won’t find the first of Waunakee’s three shots in the box score. Down 57-54, Elena Maier’s corner three - hit with with 10.8 seconds remaining in the half - was waved off; Waunakee’s Head Coach Marcus Richter had called a timeout prior to the shot.

With Reedsburg’s defense keyed in on Maier, Richter made a gutsy call on the ensuing possession. The Warriors drew up an inbounds play designed to get Ebba Harrison – on the court for the first time all night – a three-point shot.

Harrison rewarded her coach’s confidence in her, drilling the shot and tying the game with 6.2 seconds left to play

“She’s somebody who hasn’t played a ton, but can flat-out shoot it; you get her the ball…” said Richter. “She made me look really good tonight.”

“I told Ebba, ‘Shoot it; shoot it with confidence. If you’re open, shoot it because you have the best shot here,’” added Maier. “And then she does it.”

With Reedsburg down to one last shot on offense, Waunakee’s minds weren’t yet on overtime.

“[Assistant Coach Tim Decorah] came out and said, ‘Hey, if someone wants to win the game, get a steal,’” Maier said.

The Warriors did exactly that. Maier’s pressure on Reedsburg’s inbounds play forced the ball off a Beaver and out of bounds, turning the tables and giving Waunakee possession with one final chance with 4.3 seconds to go.

After getting the ball on the inbounds pass, Maier delivered one final time.

“I thought they were going to guard me one-on-one, but they didn’t,” said Maier of the Beavers' defense. “I knew they would clog the lane, and [the refs] weren’t calling much fouls… So I decided to pull up, and it went in.”

With no time remaining, Maier’s jumper from the right elbow hit the bottom of the net, lifting the Warriors to a victory in their closest contest all season.

In the early going, a Warrior team that wasn’t quite on top of their game struggled to keep up with the Beavers, and such a close finish didn’t seem to be in the cards. At the half, Waunakee trailed 31-24.

A pair of quick buckets from Lauren Statz – followed by a basket from Melanie Watson – tied the game 31-31 less than two minutes after play resumed, giving the Warriors the chance they needed.

In particular, Maier was instrumental throughout the second half. Waunakee’s junior guard scored 16 of her game-high 19 points after halftime, none bigger than her shot with time expiring.

“It’s just a great player who made a great play down the stretch,” Richter said of Maier’s late-game theatrics.

“I thank Ebba all the way,” Maier added. “It wouldn’t have happened without Ebba and our whole team.”

Behind Maier’s game-high 19 points were Statz with 10, Lauren Meudt with nine and Ashley Sawicki with eight. Ava Bryan chipped in four points, while Brooke Ehle, Watson and Harrison each tallied three points.

The victory elevated Waunakee’s record to 7-3 (3-2 Badger North), tying them in the conference standings with Reedsburg. The Warriors will hit the road for their next contest against the Eagles of Sauk Prairie. Tip time at Sauk Prairie High School is scheduled for 7:15 p.m.