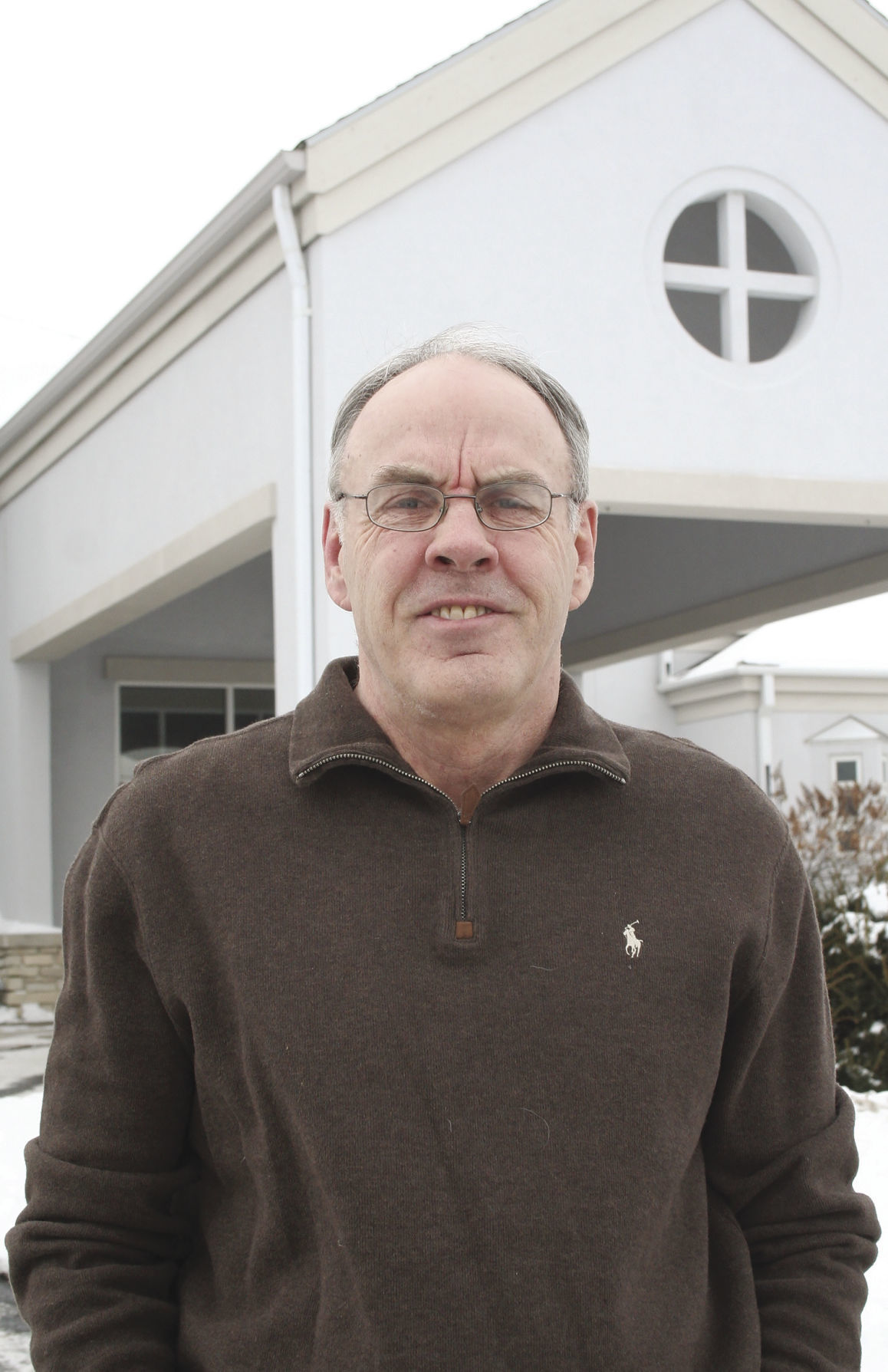 Rev. Kirk Morledge is the pastor at FPC (First Presbyterian Church) in Waunakee, and served as a Navy Chaplain for 26 years. 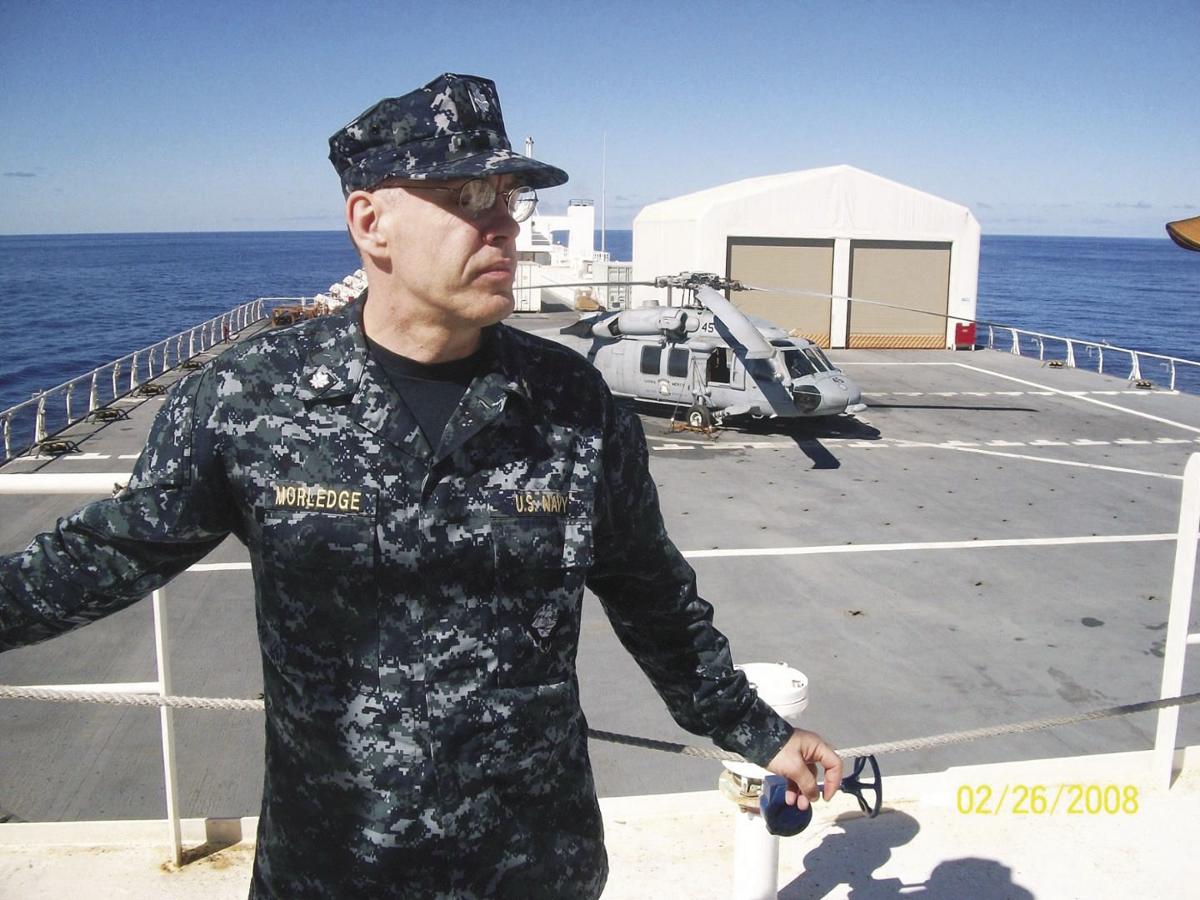 One of Kirk Morledge’s longest deployment was on a medical mission aboard the U.S. Naval Ship Mercy.

Rev. Kirk Morledge is the pastor at FPC (First Presbyterian Church) in Waunakee, and served as a Navy Chaplain for 26 years.

One of Kirk Morledge’s longest deployment was on a medical mission aboard the U.S. Naval Ship Mercy.

As a Navy Chaplain, Kirk Morledge never fought an enemy while serving in the Navy Reserve. Instead, he tended to others who had engaged in combat.

“Chaplains are not warriors,” said Rev. Morledge, the pastor at FPC (First Presbyterian Church) in Waunakee. “Their only weapons are the sword of the scripture, and that’s declared by the Geneva Convention.”

Still, Morledge underwent the same rigorous training as other Navy Reserve service men and women and then reported to duty monthly. He also was deployed a number of times, twice for lengthy missions.

Morledge was encouraged to serve as a chaplain as an associate pastor at a church in Philadelphia. The senior pastor was an Army Chaplain and impressed upon Morledge the need to serve young service men and women.

“I like young people,” Morledge said. “I felt a drive to serve my county.”

The senior pastor took Morledge to the Philadelphia shipyards and introduced him to other Naval Chaplains. There Morledge learned that he could have a ministry and a church while serving others.

In 1990, when First Presbyterian Church was housed in the small white church on Fish Street, Morledge took the commission oath and was sworn in by a church member who was also a military officer. Morledge would go on to serve for the next 26 years.

He trained in Newport, Rhode Island, for two successive summers. Morledge explained that Navy Chaplains take care of all Navy and other sailors, including U.S. Marines, Coast Guard members and Merchant Marines.

Morledge’s first major deployment came just after the Sept. 11 attacks on the World Trade Center and other U.S. targets. He was called up 12 days before Christmas, he said, and had to report in two days. He would be away for nearly a year, leaving the congregation to celebrate Christmas, Easter, confirmation and other holy days without him.

“They pulled together in incredible ways,” Morledge said about the congregation members. “Everybody stepped up. The experience made them stronger and made me stronger.”

Morledge served in Gibralter, the gateway to the Middle East, where soldiers were passing through, heading to war and returning.

Morledge was one chaplain among others of different denominations. He oversaw the base chapel there and led services, while counseling the troops. He also had a weekly radio message to the troops called “Chaplines.”

“The military has scores of different flavors of chaplains of different faiths. They are required to facilitate ministry of all faiths and no faith,” he added.

After Morledge was called up, he realized no chaplain was available to lead Jewish services, so he had to find a rabbi.

The experience of serving with a diverse chaplaincy broadens the mind, according to Morledge.

The chaplains have to maintain the same physical fitness standards as the troops. Like the troops, they leave their families behind. All aboard eat on the mess deck together, forming strong bonds.

Morledge said the chaplains serve to ensure the exercise of religion and to guarantee confidentiality to all who wish to talk.

“If you can offer the gift of confidentiality to members who have been at war… you’re going to have a lot of questions. War brings with it trauma, separation and questions about death and God,” Morledge said.

His second long deployment was in 2010 aboard the U.S. Naval Ship Mercy, which deploys from San Diego mostly to the South Pacific. It was a medical mission, and the Mercy had nine operating rooms. Staffed with doctors, surgeons, dentists and other medical specialists, the ship made stops in Vietnam, Cambodia, Indonesia and other countries to treat patients. The mission was also to “win hearts and minds rather than winning battles,” Morledge said. Doctors from 14 different nations treated 101,000 patients, and 14 pastors served. Eighteen different non-governmental organizations were also represented.

While the first deployment was on a base with sailors, Marines and others coming and going, the second was on a ship with the same people for the entire half a year.

“You’re at sea day after day and see nothing but water,” Moreldge said. “To do that for months on end makes you realize how much of the earth is water.”

As Morledge ministered to service members, several common themes emerged. Family separation proved to be a major issue, he said, adding that deployment can take a heavy toll on a marriage. Suicide prevention was key; it is estimated that 20 veterans die by suicide each day.

Morledge stressed that the service members are young, so much of the counseling is about relationships.

Morledge now believes that some form of national service, requiring all to serve their country in some way, whether it be in the national parks, in the military or teaching in inner city schools, would be valuable.

“It would help people to give back and deepen people’s appreciation for the country and her needs,” Moreldge said.