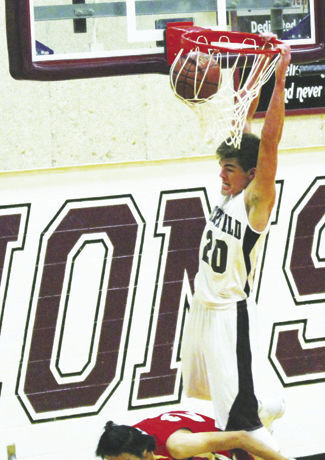 As a high school basketball player at Deerfield Blake Ehrke was named the Trailways South Conference Player of the Year as a junior and senior. 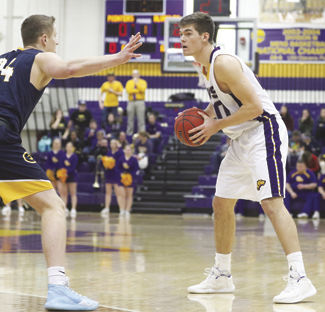 As a high school basketball player at Deerfield Blake Ehrke was named the Trailways South Conference Player of the Year as a junior and senior.

Up in Wausau, there’s a young man who sells indoor and outdoor basketball courts for a living. He loves it and what he sells seems like a natural fit for Blake Ehrke, who stands 6-foot-5 and once excelled on the basketball court at Deerfield High School.

“It was right up my alley,” said Ehrke, who recently graduated from the UW-Steven Point and is now employed at Sport Court Wisconsin. “It’s not too hard to sell a court when the person has the same interest as you do. They look at you and say ‘This guy’s played basketball.’”

Aside from basketball, which he played at Stevens Point, Ehrke also had some very successful years playing football and baseball at Deerfield. He has fond memories of the mentors, who taught him how to conduct himself as an athlete. That guidance has helped Ehrke get his young life off to a good start.

Before entering Deerfield High School, Ehrke tried to take after someone whom he greatly admired and watched on the football, basketball and baseball teams: his older brother, Brandon. Young Blake admired his sibling for the way he conducted himself inside and outside the game, and he tried to emulate him after entering high school.

One of Blake’s biggest thrills came as a freshman when he and Brandon were part of the Deerfield baseball team that advanced to the WIAA Division 4 state tournament. In the semifinal game against Westby at Fox Cities Stadium in Appleton, the younger Ehrke drove in Deerfield’s only run in the fourth inning with a base hit that scored catcher Zach Gross. But Westby took advantage of two Deerfield errors, and scored single runs in the fourth and fifth innings to beat the Demons 2-1.

Despite the setback, Ehrke still recalls the thrill of playing baseball in Wisconsin’s largest spotlight.

“There’s nothing that beats going to state in any sport. I don’t care what it is,” he said.

Ehrke also fondly remembers his junior year on the basketball team when the Demons advanced to the 2015 WIAA Division 4 sectionals. The Demons started out with blowout wins over Waterloo and Belleville in the regional round. Ehrke had 28 points and 26 rebounds in those two games.

The Demons’ postseason would end in the sectional semifinal game with a 64-48 loss to Mineral Point. Ehrke said the fan support toward Deerfield basketball was overwhelming.

“We would get 500 people at a sectional game that was an hour and a half away. I don’t know how many small towns get that,” Ehrke said. “For the atmosphere of a small town, we had one of the best fan groups in all of Wisconsin.”

Ehrke averaged 18.8 points, 14.6 rebounds and 2.5 assists per game and was named the Trailways South Conference player of the year.

In 2016, Ehrke repeated as the league’s top player by leading Deerfield to a 21-3 overall record and 16-0 mark in the conference. But, the Demons were knocked out of the regional final by Darlington, 63-51. Ehrke ended his senior year with 21 points, 13.5 rebounds and 4.5 assists per game.

During high school, Ehrke was also fortunate to play for one of the more iconic names in Wisconsin basketball. Hugh Roberts coached the Amateur Athletic Union (AAU) team in Randolph and put together squads with prodigious college-caliber talent. Playing against those athletes prepared Ehrke for his upcoming college career at Stevens Point.

“When you put nine guys together with the same goal to play college basketball, something special can happen,” Ehrke said. “We had nine guys that bought into what Hugh Roberts was coaching. When you play against better talent than you, you get better.”

Ehrke also admired the ‘aw-shucks’ attitude of Roberts, who had built an accomplished career in athletics.

“He was a great humble human being. He would never brag about anything or himself,” he said. “Just the way he carried himself was special.”

Ehrke headed to Stevens Point after graduating from Deerfield in 2016, and it turned out to be an excellent decision. He was familiar with the coaches after attending basketball camps on the campus.

“They would come to my games, and we would keep in contact after camps,” he said. “It just felt like the right fit for me. It was not too far away from my parents, and they could come and watch me play.”

Ehrke saw limited minutes in his first three years, but in his junior year, his talents turned out to be important for the 2018-19 Pointers’ team that survived the first two rounds of the Wisconsin Intercollegiate Athletic Conference (WIAC) tournament.

Ehrke scored 13 points and grabbed 11 rebounds in an 89-61 first-round victory against Eau Claire, and then earned his second straight double-double with 11 points and 10 rebounds to defeat Oshkosh, 76-56. Stevens Point would lose to Platteville in the WIAC tournament final 70-57 with Ehrke scoring 8 points and pulling down 4 rebounds.

After that season, the Pointers graduated seven seniors, including four starters, and it looked like the 2019-20 team may be in for an uphill struggle. But Ehrke and Stevens Point finished 15-11 overall and 7-7 in the WIAC. The Pointers fell in the first round of the conference tournament to Eau Claire, but Ehrke ended his college playing career averaging 33 minutes, 12 points and 8 rebounds per game. He also hit 48-percent of his shots from the field and 34-percent from the 3-point line.

“The opportunity was there for me to take. I knew it was my last year of competitive basketball and I’m going to give it everything I have,” Ehrke said.

Today, he is giving his all when it comes to selling basketball courts, and he plans to stay in that position for the time being.

Ehrke is grateful for the opportunity to play sports and use what he learned as a competitive athlete.

“There’s no better feeling than getting together with a group of guys and playing for something where you all have the same goal, and that’s to win,” he said. “You don’t get that feeling doing anything else.”