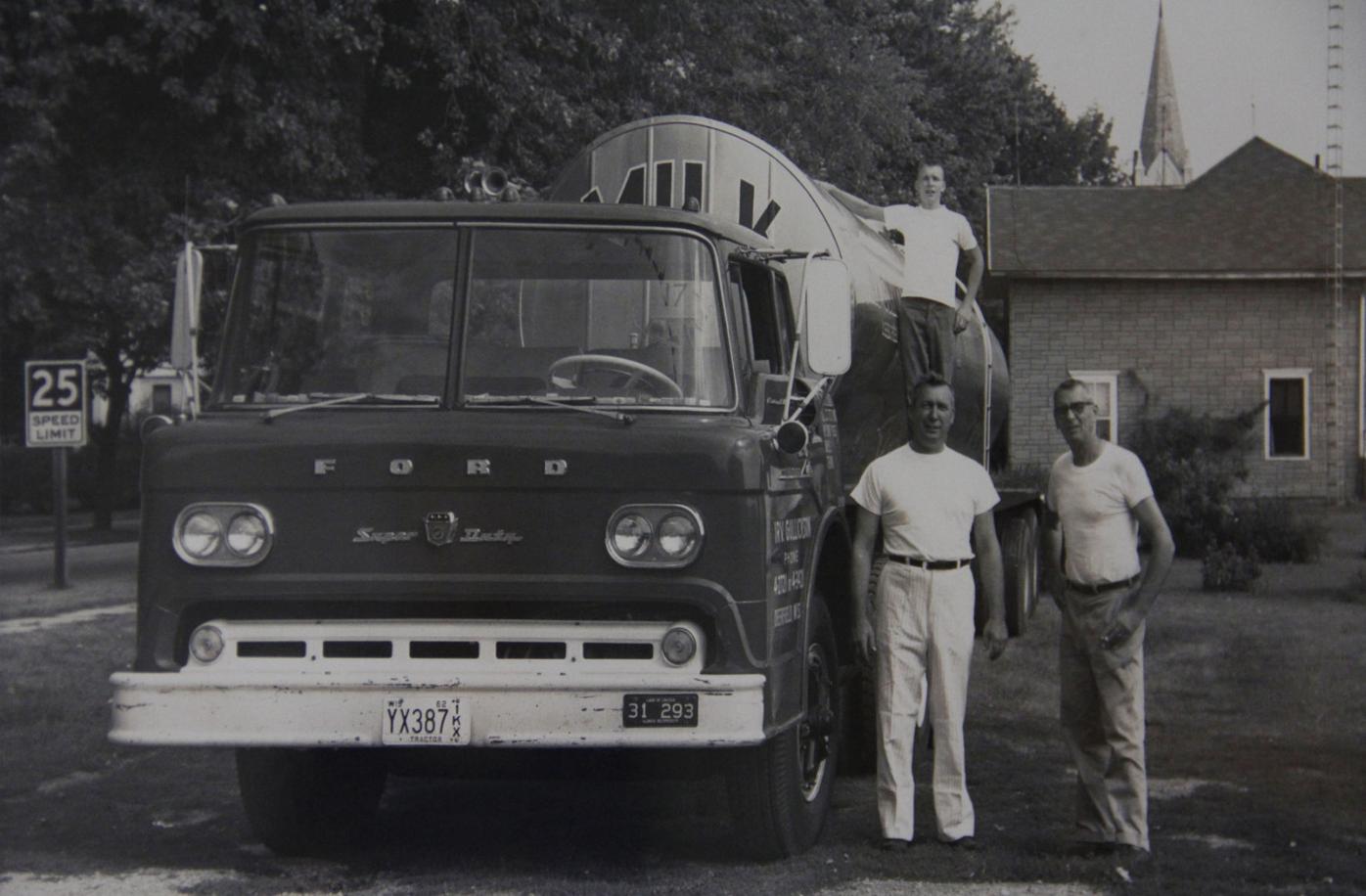 Irv Gullickson (left) and Jerry Gullickson (right) pose with a semi-tanker in 1962, with Tom Gullickson standing on the truck’s fender. 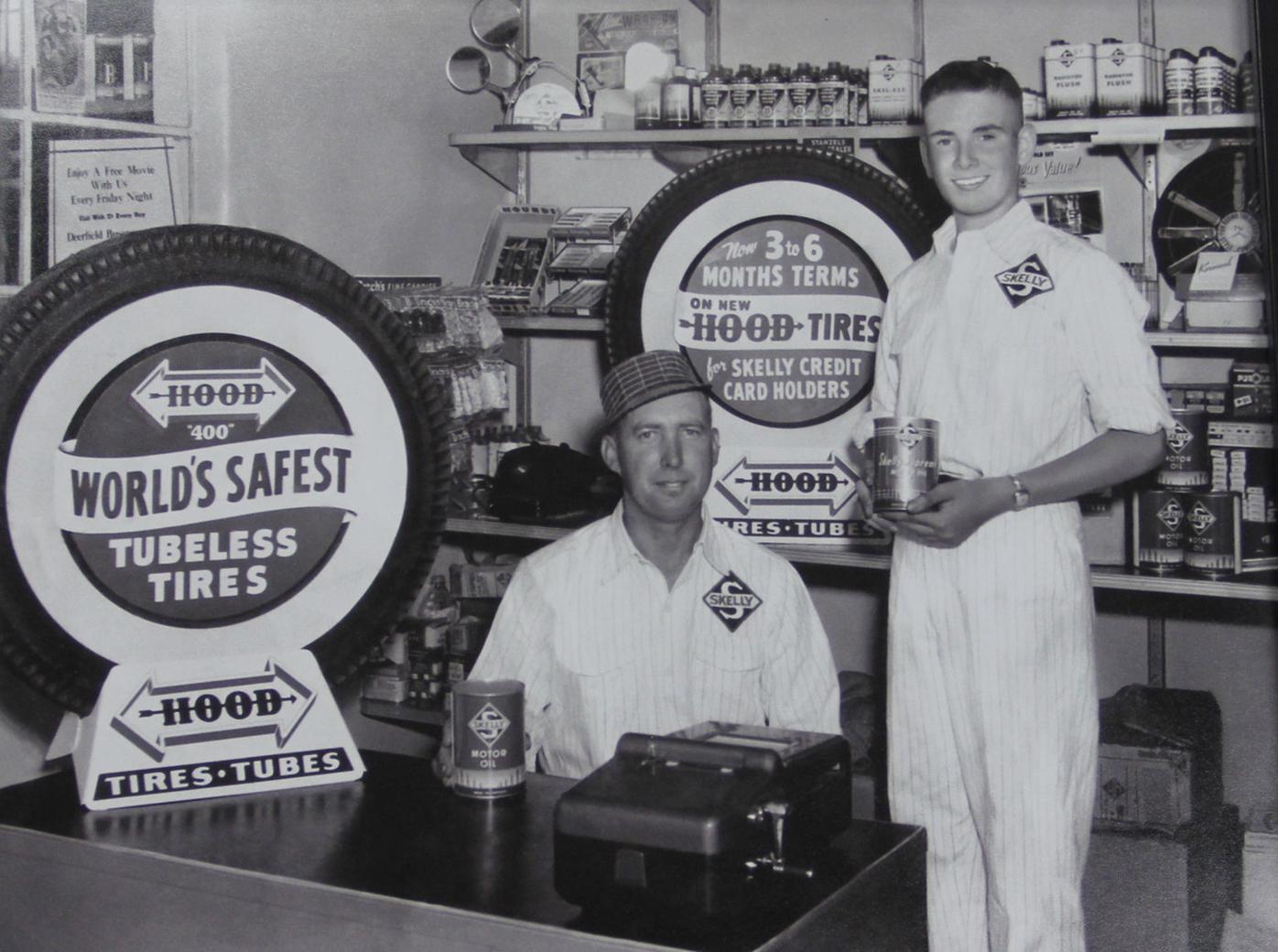 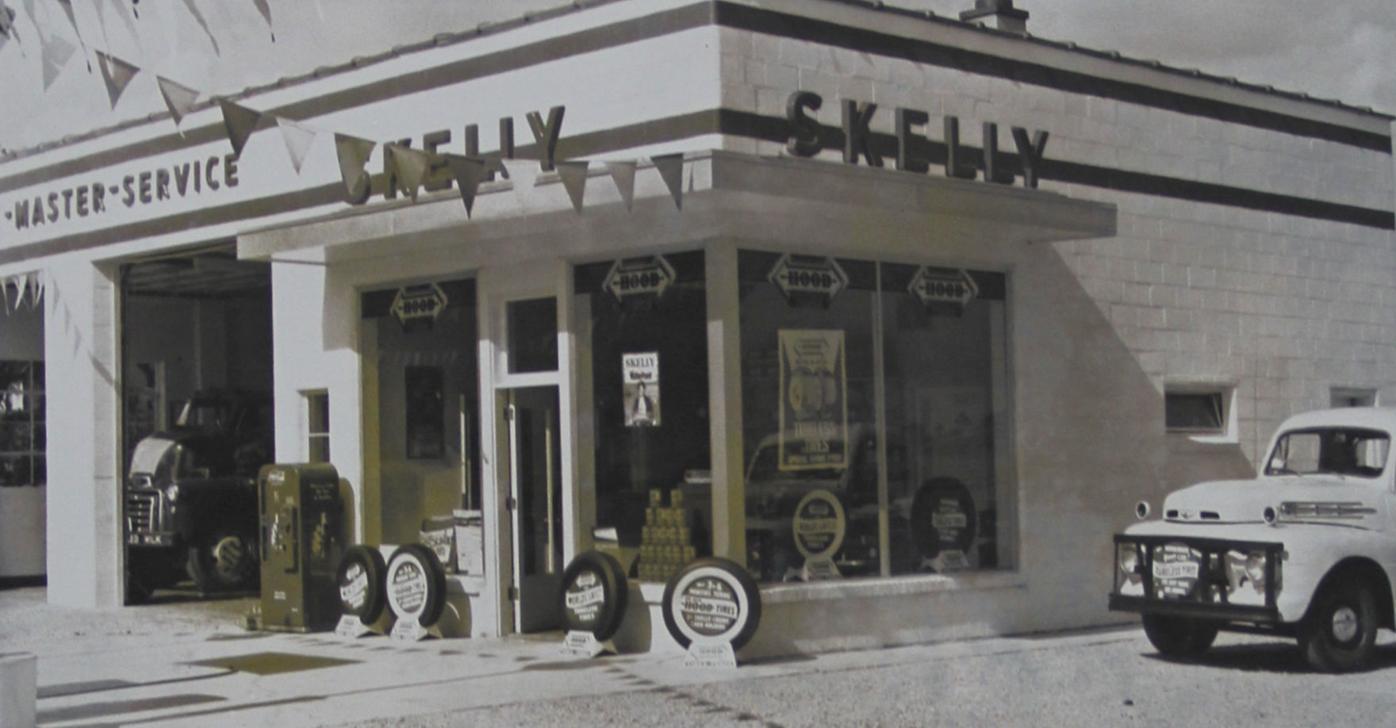 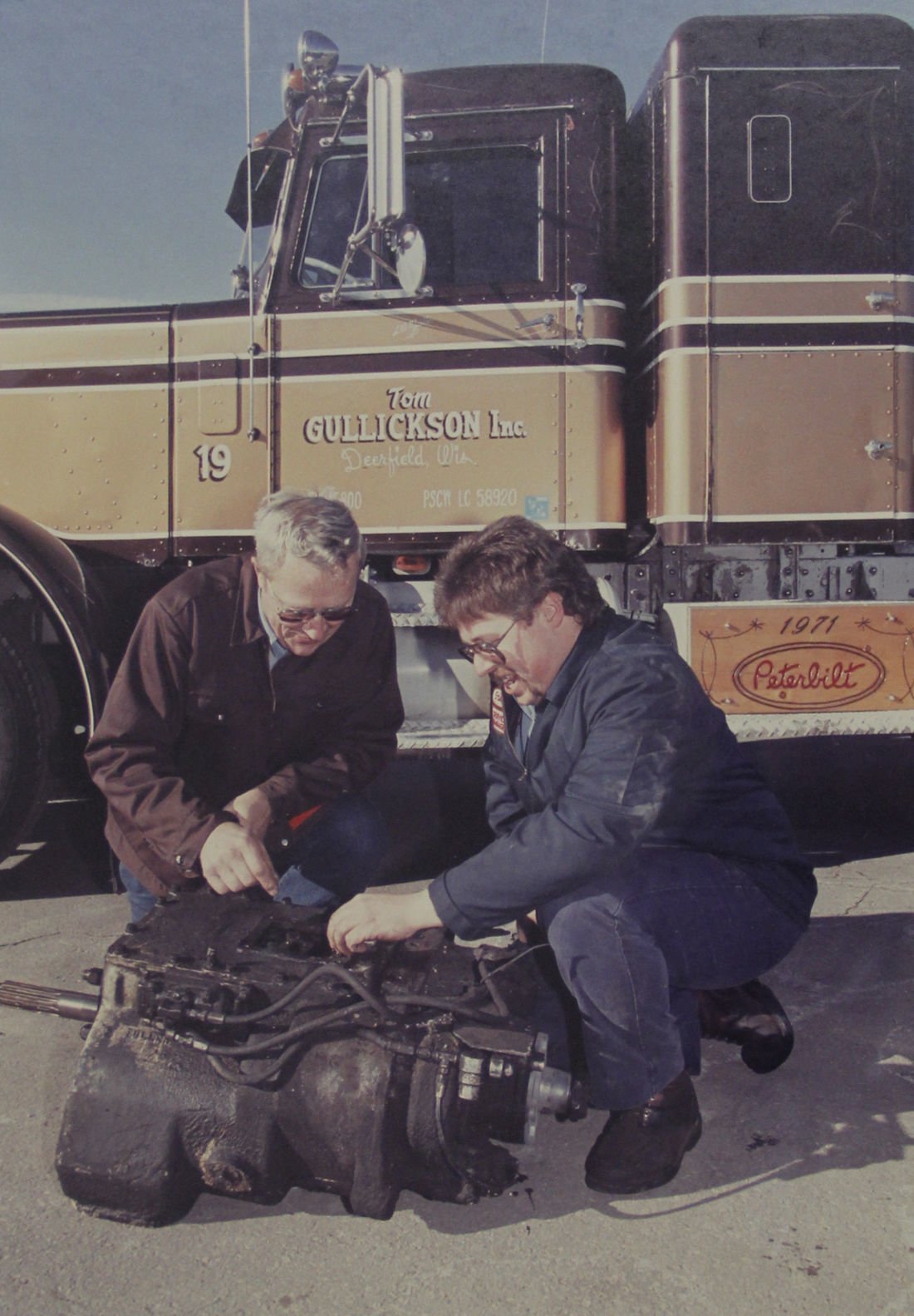 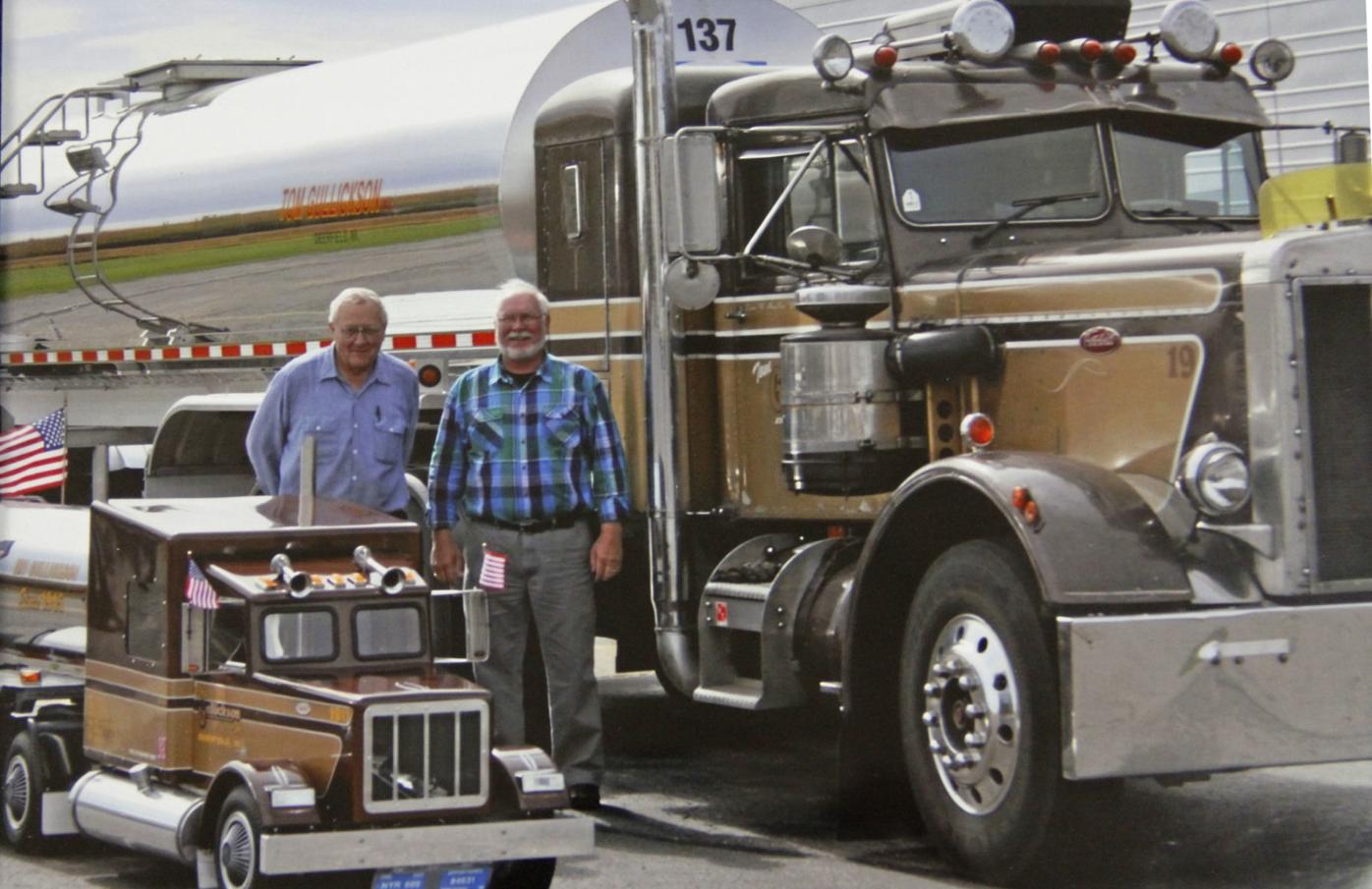 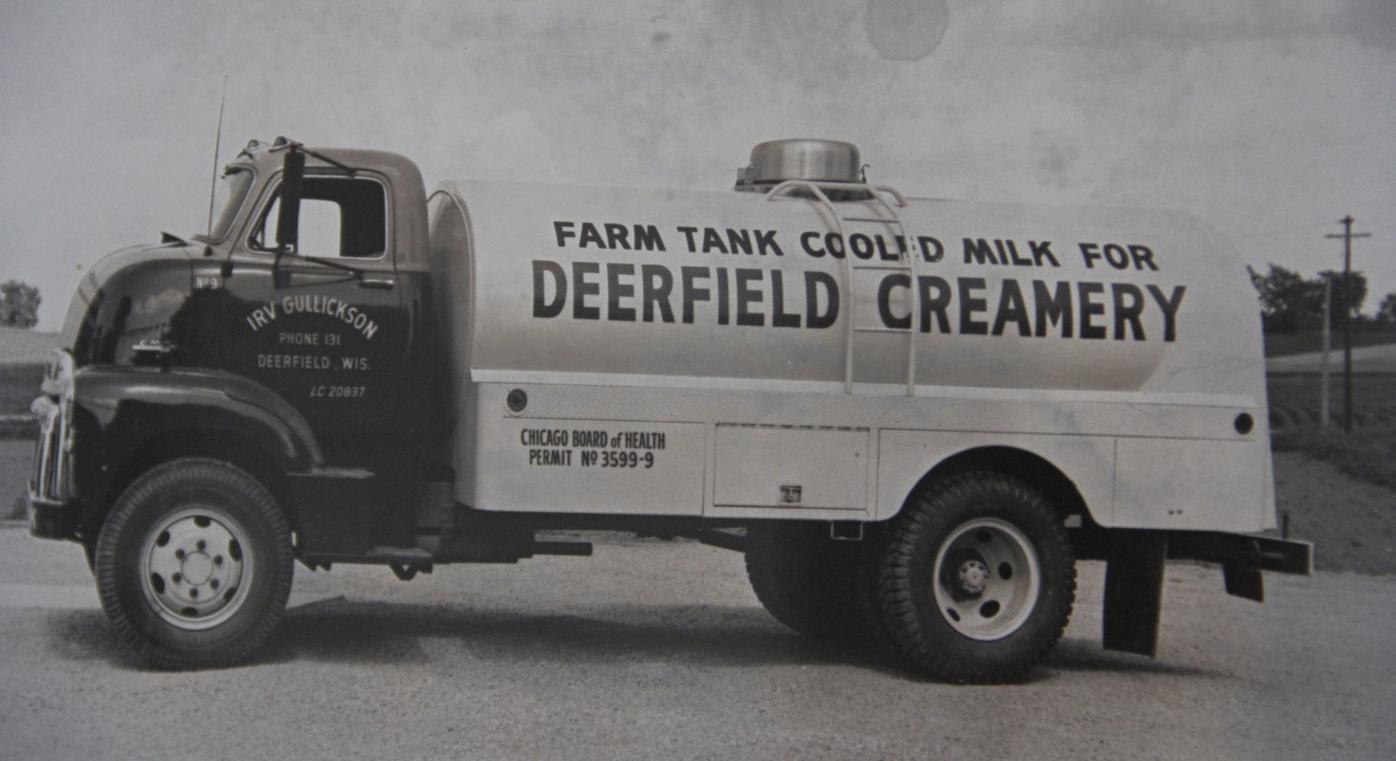 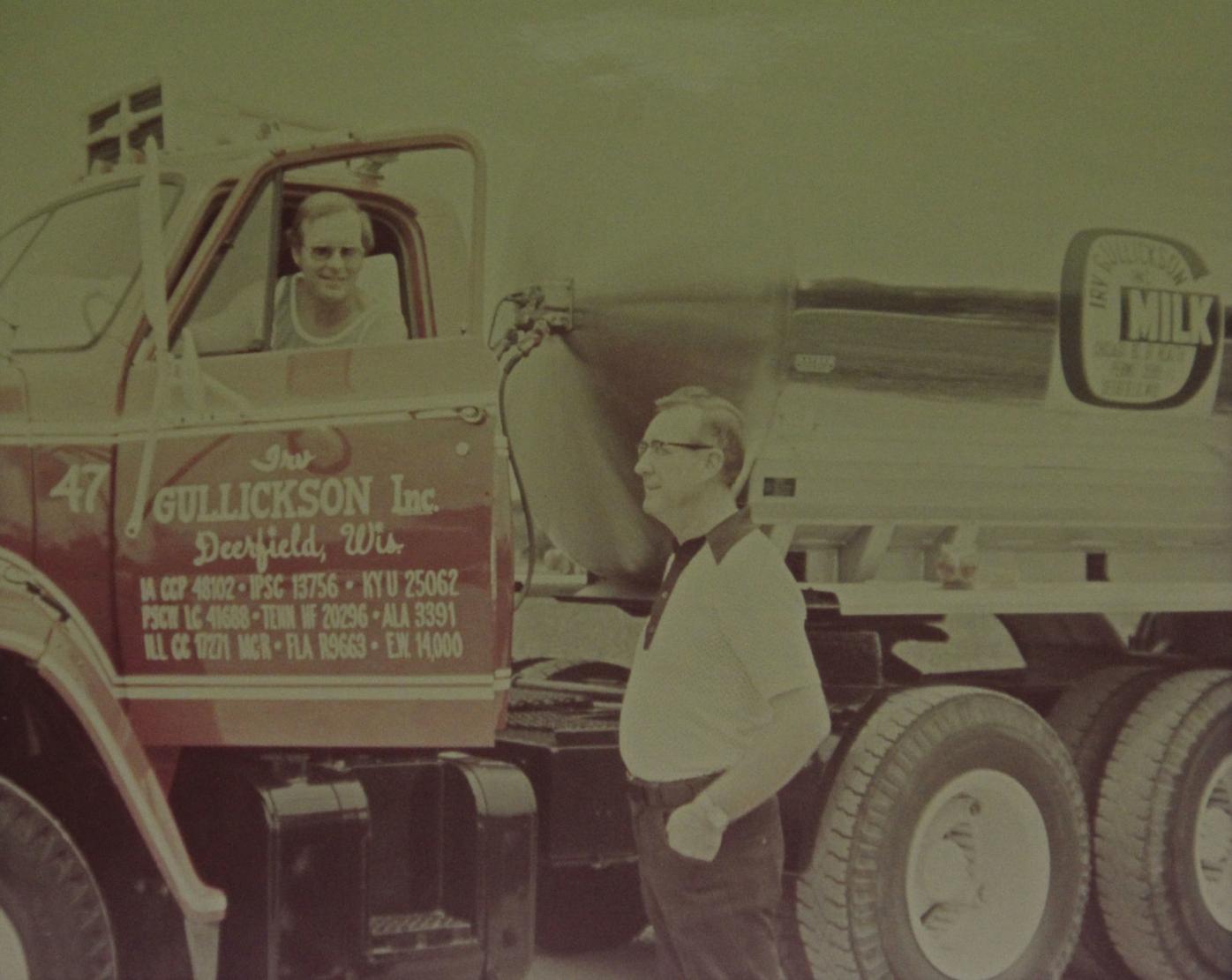 Irv Gullickson (left) and Jerry Gullickson (right) pose with a semi-tanker in 1962, with Tom Gullickson standing on the truck’s fender.

A farm kid from a large family near Stoughton, Irv Gullickson was no stranger to hard work.

As World War II wound down, the 29-year-old had been employed for a few years picking up filled milk cans from rural farms and driving them into processors like Bancroft Dairy in Madison.

“He had the chance to buy his own can milk route,” Gullickson’s son, Tom says.

Starting with one truck, he began traveling from farm to farm, picking up full milk cans and delivering them to the Deerfield Creamery Co. in Deerfield, where it was mostly made into butter and powdered milk, with some surplus milk also resold. The creamery operated on North Main Street in Deerfield from 1925 to 1969 and at its peak was one of the area’s largest employers.

Soon, his grandfather’s business was taking off, driven by a fierce work ethic, says Mike Gullickson, who took over the company from his parents, Tom and Sue, in 2013. They had run it since 1986.

Irv Gullickson Milk Hauling, that evolved in 1986 into Tom Gullickson, Inc., this year celebrates its 75th anniversary in Deerfield.

Mike, Tom and Sue Gullickson, in recent interviews, shared the story of how Irv Gullickson, his children, grandchildren, other extended family members and long-time employees have sustained an operation whose trucks now criss-cross the United States, hauling milk and other food products, from juice to frozen sausage, fish, vegetables and liquid eggs, in semi-tankers and refrigerated trailers.

Today, the Gullicksons employ about 50 people as drivers, mechanics and office staff. The company has been located since 1995 on 12 acres along State Highway 73, just south of Deerfield.

By the early 1950s, his father “had three or four trucks hauling can milk,” Tom Gullickson continues with the story. In 1954, he transitioned to picking up milk from area farms in bulk milk trucks.

The dairy industry’s transition from using milk cans to using bulk milk tanks was controversial, Tom Gullickson said. Farmers who were paid based on the butterfat content of their milk were concerned about it being mixed in with potentially lesser-quality milk from others. Evolving technology that allowed butterfat to be tested before milk left a farm helped alleviate those worries, he said.

In 1957, at the urging of Charles DeGolier at the Deerfield Creamery Co., Irv Gullickson bought his first semi-tractor and insulated tanker. In addition to hauling milk into the creamery, he could now haul the creamery’s surplus milk out to larger, distant markets like Chicago.

“We went to Chicago at first…and then things grew,” Tom Gullickson said. “Other dairies wanted my father to haul their milk, too.”

In subsequent years, “we hauled a lot of Golden Guernsey milk down to Jackson Mississippi,” he said.

Dean Foods bought the Deerfield Creamery Co. and shut it down in December 1969, eliminating its many local jobs and leaving local farmers with no nearby outlet for their milk, which needed to be picked up daily.

In response, Irv Gullickson early in 1970 transformed his maintenance building into a “pump over” station located behind the Skelly Oil service station he had built and operated at South Main and Lake Streets since 1955. His son, Terry Gullickson, would manage that pump over station for 30 years, until it was closed in 2000.

The Gullickson pump over station was the first in the state to be approved by the Chicago Board of Health.

Milk from area farms was hauled into the pump over station, transferred into Gullickson’s semi-tankers and hauled out to food processing plants, dairies and other destinations.

The Gullickson family still owns the former pump over building property behind the former Skelly Oil building, that is now a Mobil station. In recent years, the family has sold the Mobil site.

For many years, the Gullicksons also owned another building in downtown Deerfield, at South Main and West Deerfield streets, that had originally been a Ford garage built in 1917.

The family serviced its semis at that garage, and their bookkeeper and accountant’s offices were there also. They ultimately sold that building to local dance teacher Debbie Griggas, who had her studio there until 2017, with basement space leased to the Deerfield Community Center. That site is now owned by the adjacent Bank of Deerfield, who tore the building down in 2019.

Tom Gullickson said his decision to move the entire operation out to the State Highway 73 site in 1995 made sense, given how the company was continuing to grow.

“We wanted to have a bigger shop, we needed more space, and we wanted to have everyone under one roof,” Tom Gullickson recalls. He considered locating in the Deerfield Industrial Park, “but this space was better,” Gullickson said, with more visibility at the village’s southern gateway and the ability for semis to easily turn onto the open highway.

Downtown, “when we had to get a big truck out of the Ford garage we had to stop traffic because of the blind spots on both sides,” Sue Gullickson recalls. “Now, trucks can pull out, and once they are out of the driveway they are on their way.”

Since they were teenagers, Mike Gullickson and his four siblings have all worked in various capacities for the company. He and his siblings Ryan and Kristin remain involved in the operation, whose drivers now in a typical week haul several hundred loads nationwide.

For Mike Gullickson, there has always been a family business.

He remembers, as a child, being “in awe of the trucks, climbing into a semi, getting behind the wheel, just sitting there and blowing the air horn.”

“My responsibility was, while a truck was being loaded, to wash it so that when it left Deerfield it was clean and looked good going down the highway,” he recalls. After college, he returned and assumed ownership when his parents retired.

Tom Gullickson’s first job was also as a teenager, driving from farm to farm collecting milk from bulk tanks.

“When I was old enough to drive a truck that is what I wanted to do,” he recalls. “I started hauling short distances with the semis. When I got more experienced, that naturally grew into hauling longer distances.”

The family says there are many keys to their remaining in business for more than seven decades. Those include working hard and diversifying their customer base so if one segment of the food industry slows there are always others to serve.

“You don’t have one customer that you completely rely upon. If that customer goes away you are out of business,” Tom Gullickson said.

Food hauling in general “is a good industry to be in… almost recession proof, because everybody’s got to eat,” Mike Gullickson reflects.

Some of their drivers have worked for them for more than 50 years. In a few cases multiple generations of families have driven for them. And most employees have lived within 30 miles of Deerfield.

“We have always prided ourselves in hiring local people,” said Tom Gullickson. Tagging onto that thought, Sue Gullickson said they have been honored to work with “a great group of drivers.”

“We couldn’t have done it without our employees. We have a lot more who have stayed than have left, and a lot of them live right here in Deerfield, and they believe in us and believe in what we are doing,” Tom Gullickson said. “A great mix of dedicated employees…working toward the common goal of helping everybody and succeeding together.”

The Gullicksons also pride themselves in the company’s safety record, which they say is important to drawing and keeping employees.

“Drivers come here because they see our safety record and they want to work for a good company,” Tom Gullickson said.

Looking back, Tom Gullickson reflects that “there’s been a lot of change over the years,” and said he’s proud to have kept up with the evolving industry, and to still be a viable operation in 2020.

“You’ve got to keep going forward as a business. If you stand still you are going to go backwards,” he said.

Mike Gullickson said he had hoped to hold a community celebration to mark the 75th anniversary, with food, music and children’s activities like bouncy houses. It was to be in September on the company’s property on State Highway 73.

The coronavirus pandemic that hit in March has left those plans in limbo for now.

He said it’s important to his family to say thank you to the Deerfield community.

In the Gullickson family’s 75 years of hauling milk and other food products in and out of Deerfield, there have been a lot of trucks.