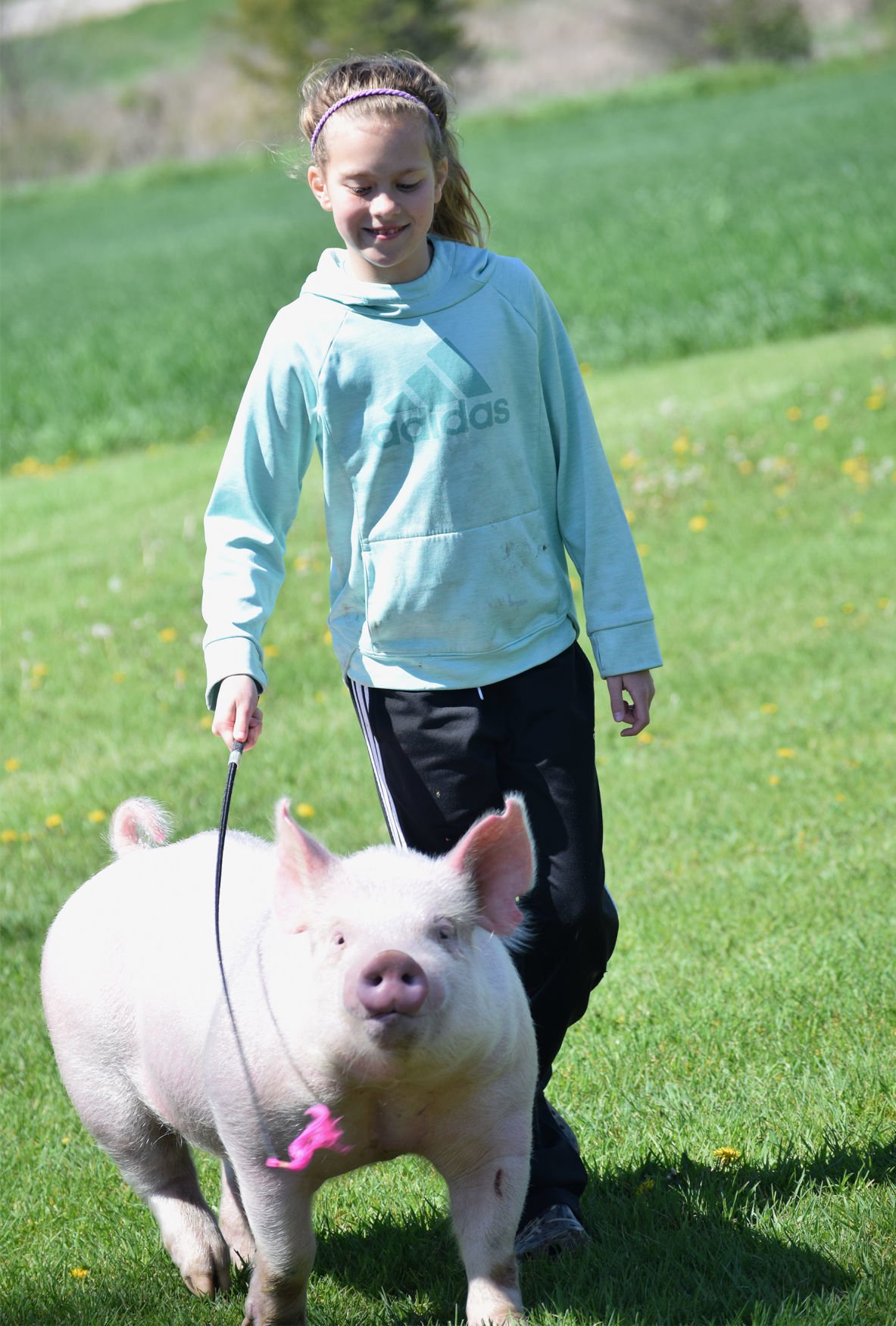 Tara Bettenhausen walks the pig she had planned on showing at the Stoughton Fair. 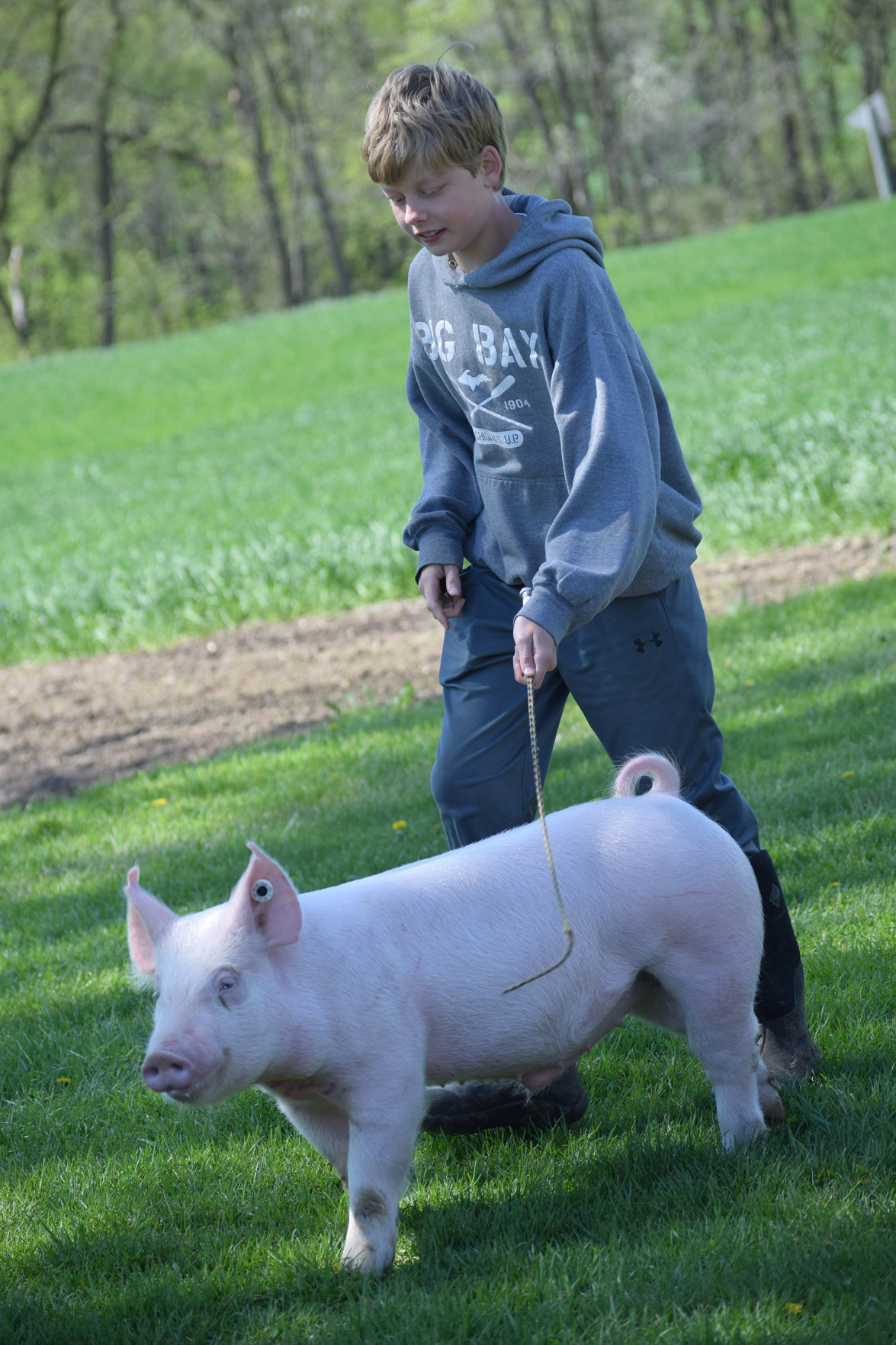 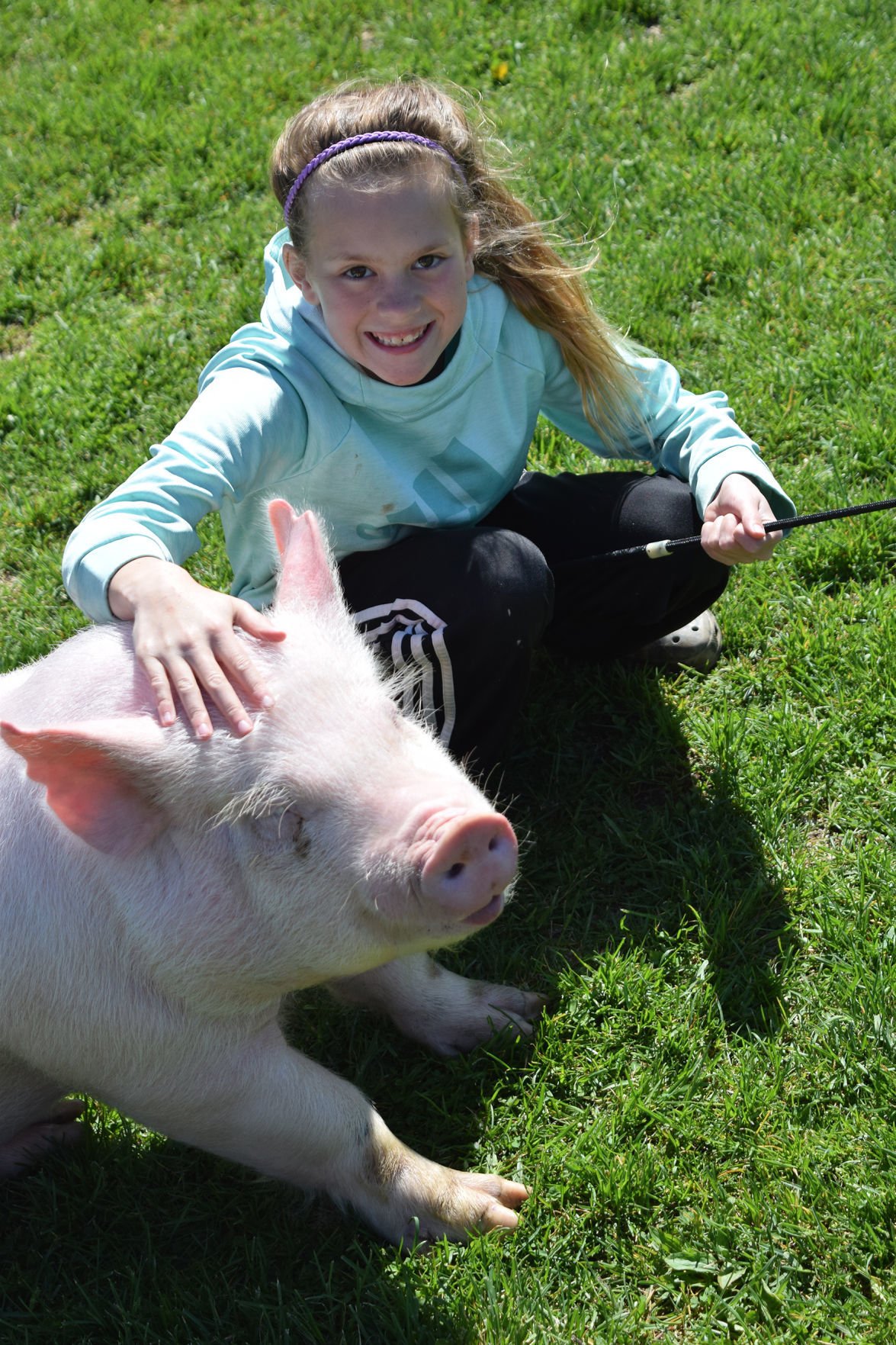 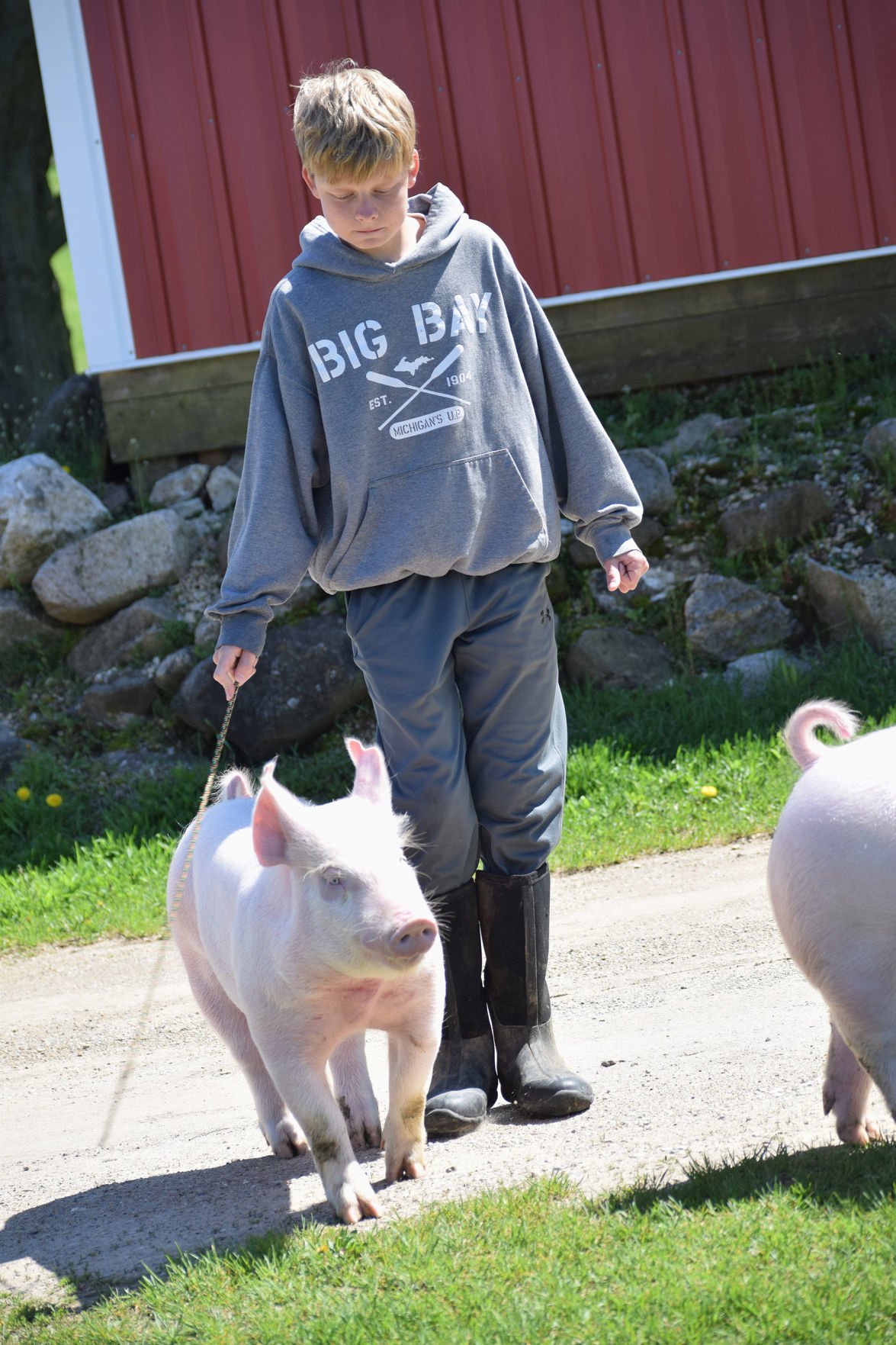 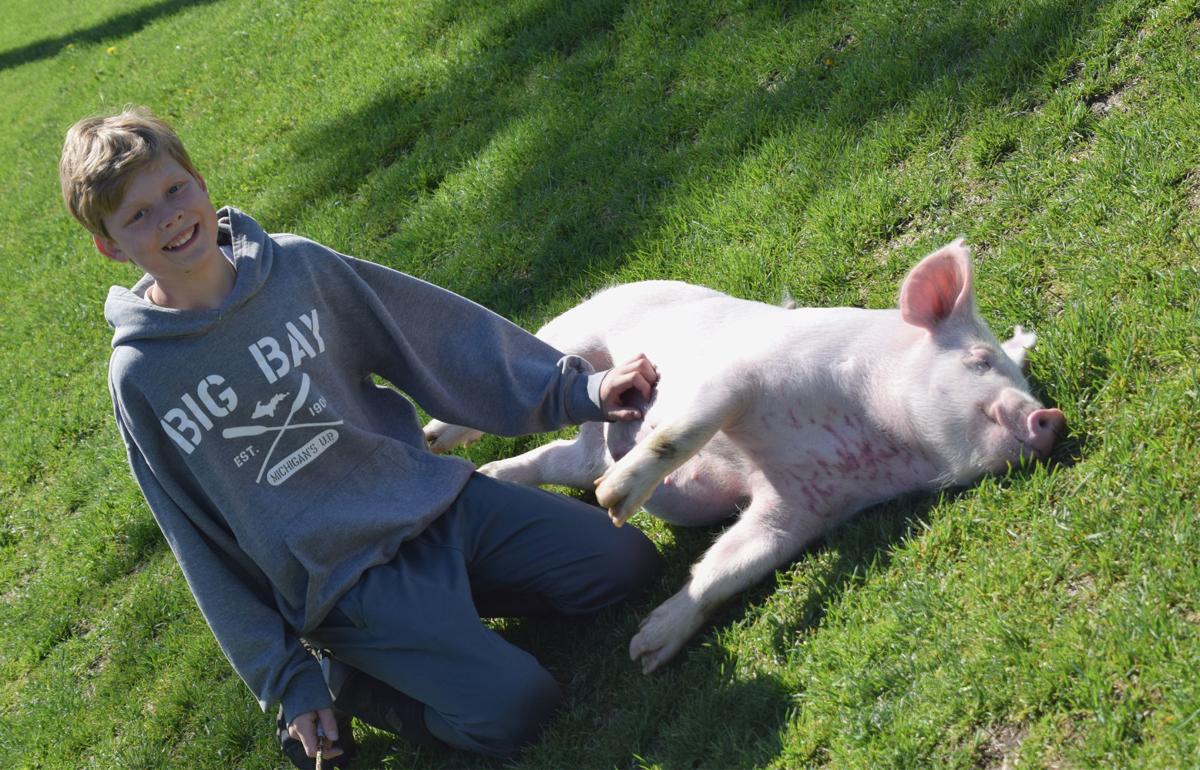 Tyce's pig takes a brief rest in the grass after walking.

Tara Bettenhausen walks the pig she had planned on showing at the Stoughton Fair.

Tyce's pig takes a brief rest in the grass after walking.

Cambridge 4-H and FFA members are hanging on for the Jefferson County Fair, as other 2020 area fairs are canceled due to COVID-19.

The Dane County Fair, which many Deerfield and Cambridge families participate in, was canceled in a May 13 announcement from the Dane County Fair Association. It said the decision was made with “with great sadness.”

“This decision was extremely difficult and disappointing for our board, but ultimately the health and safety of our community, attendees, partners, staff, and volunteers are of the utmost importance,” said Dane County Fair general manager Danielle Ziegler.

Word subsequently came down on May 19 that the Stoughton Fair, also a favorite among Deerfield and Cambridge 4-H and FFA groups, won’t happen either this summer. It had been set for July 1-5 at Mandt Park in Stoughton.

A statement from the Stoughton Fair Association cited Dane County’s state of emergency declaration that’s in effect until July 15, and the risk to exhibitors.

“Our youth exhibitors and fair traditions are very important to us, but nothing is more important than the health and safety of every patron that joins us at the Stoughton Fair,” the release said.

“This board has been faced with our share of challenges but nothing as hard as the decision to cancel our 97th annual fair,” the statement continued. “We hope to never be faced with this again.”

But in Jefferson County, at least a semblance of the fair is planned to go on.

The Jefferson County Fair Board announced on May 18 that junior, open and senior exhibitors will still have a chance to have projects judged July 8-12, the dates that had been set for its 2020 fair.

Since the State Supreme Court on May 13 overturned a statewide COVID-19 Safer-At-Home order, Dane County has put its own order into place with a gradual reopening expected, based on public health benchmarks being met.

Jefferson County, meanwhile, has issued guidelines since the statewide order was overturned, but no longer has any rules in place for businesses reopenings or public gatherings.

Other fairs in Rock County and Dodge County also remain on schedule for July and August.

“Our Junior, Open and Senior class exhibitors have been working hard, some since last year’s fair. We want to assure them that their projects will have the opportunity to be judged and displayed this year,” said Jefferson County Fair director Amy Listle.

The release said the board will announce its judging schedule and procedures in coming weeks.

The Jefferson County Fair Board surveyed families, gauging their preferences about safety measures like masks.

“All departments will have modifications to ensure the health and safety of all involved,” the statement said.

Sophie Grieser, a Cambridge FFA member, purchased two pigs to show at the Jefferson County Fair in March, just before schools closed statewide due to COVID-19.

“We’ve definitely kept working with them and everything just for the possibility,” Grieser said.

Tara Bettenhausen, a fifth-grade Lake Ripley 4-H member who was preparing to show a heifer at Jefferson County and a pig at the Stoughton Fair, said she had her doubts they would go on “but I still kept practicing with my animals to get them ready.”

Grieser said word that the Dane County Fair was canceled was “really worrisome,” leaving her with little hope that Jefferson County would happen.

“The thought of not having it was really sad...I just didn’t want to even think about it,” Grieser said. “(It’s) really great to hear, very relieving, that our work is actually going to be able to pay off.”

Lake Ripley 4-H member Hanna Brattlie agreed. Brattlie said she only wants to go to the fair to “see her friends from the fair, and be able to exhibit.”

“I don’t really care if there’s not a carnival, the food, all that doesn’t matter to me,” she said.

The Brattlie family said their reaction to hearing the Jefferson County Fair was joy.

“I was ecstatic, I was bouncing off the walls. I was so happy,” Rylee Brattlie said of hearing Jefferson County was on. “When I think of summer, I think of fair. That’s one of our most important things of summer.”

With so many other activities called off for the coming summer, “this is the only thing they have left to look forward to,” said Joy Brattlie, Rylee and Hanna’s mother.

Cambridge FFA advisor Emily Klingbeil said it’s “been stressful up until this point,” and that this is “good news.”

While both the Dane County and Stoughton Fairs will extend participation in the fair next year to anyone aging out this year, the cancelations are still being mourned. Grieser, a senior at Cambridge High School, is feeling the loss.

“It’s my senior year, it’s just already a sad year because it’s my last year showing,” Grieser said. “All of my family members have done it...All of my friends are there. It’s the best week of the year.”

“The fact that Jefferson County is going to try to put something together is really nice, because everyone does work so hard,” she continued.

Whether the Jefferson County Fair will include a meat auction is “still the big question mark,” Klingbeil said.

Without it, Grieser said, “all of these kids would be losing thousands of dollars.”

Families have invested significant amounts of money into purchasing and caring for animals, Klingbeil said, agreeing that the potential lost investment is a concern.

Kari Bettenhausen said her children, Tyce and Tara, each bought a pig they were planning to show at the Stoughton Fair. Now, the family is looking for a way to sell them. Both use their earnings from selling their pigs the previous year to fund next year’s projects, she said.

“They support their animals and their projects all by themselves,” Bettenhausen said.

Bettenhausen said they’re planning on holding a virtual pig sale on June 28 for family, friends and local businesses, with Tyce as auctioneer.

“Tyce, he would love to be an auctioneer someday,” Bettenhausen said.

They are also considering showing their pigs in a virtual show on May 23 hosted by the Wisconsin Show Pig Association.

She said Tyce is also hoping to show a pig at this year’s Wisconsin State Fair, if it happens. This would be Tyce's first year showing at the State Fair. The State Fair is still scheduled for August.